When do contemporary affairs become “history”?

“The increase in the velocity of history means, among other things, that the ‘present’ becomes the ‘past’ more swiftly than ever before.” Thus the American historian Arthur Schlesinger Jr. in his address to the American Historical Association – in 1967. Schlesinger ascribes the reason for this acceleration of the rate the world is changing to human innovation:

“The transformations wrought by science and technology have acquired a cumulative momentum and an exponential effect, rushing us along by geometric, not arithmetic, progression.”

If this exponential effect of change through technology and science, and the resulting increase in the “velocity of history”, was thus a concern already at his time, at not even three quarters through the 20th century, over a decade before the invention of the internet, a good quarter of a century before email and the WWW started being used widely, and forty years before the first iPhone hit the market – how much more so do we need to be concerned about it in our age of almost daily technological innovations, ubiquitous smartphones, and especially readily available online newspapers and reporters’ blogs and tweets?

Both reporting and analytical writing can already hardly keep up with events as they happen – and at what point do “journalism”, “comment” and “analysis” become “historical writing”? Undeniably, “contemporary history” ends with the present – but by the time the historian’s analysis of events is concluded, never mind by the time their book or article is ready for publication and accessible to the public, the present has long since become the past. Trying to write the history of the present is a futile endeavour – Michael Burleigh’s 2017 book The best of times, the worst of times: a history of now, where today this “now” is already over two years out of date, clearly shows the hazard of including words like “now”, “to the present”, “contemporary”, or “recent” in the title of any history book. It is no wonder that even the most “contemporary” module in “modern history” offered by the Faculty of History here at Oxford only covers events up to and including the year 2000.

Contemporary historical writings, or the writing of contemporary history, can thus not really reflect the information explosion we have experienced since the beginning of the 21st century – SOLO lists over 8,000 physical items and over 10,000 electronic resources with the combined subjects of “21st century” and “history”. This may sound impressive, but is really not all that much compared to the nearly 120,000 books on the history of the 20th century (even if you take into account that the 21st century is so far only a fifth as long as the 20th century has been). This imbalance is certainly reflected in the new books on the subject of 21st century history that have arrived at the Bodleian over the last year: our LibraryThing tag page for “21st century” contains a mere 66 titles, only 44 of which were added since January 2019 – as compared to 1426 titles tagged with “20th century”, with 474 new books arrived since the beginning of the year.

But even among the books tagged with 21st-century history, only very few deal exclusively with events in the 21st century. Some exceptions are Beatrice Heuser’s Brexit in History, Peter Frankopan’s The New Silk Roads: The Present and Future of the World, or Deported to Death: How Drug Violence is Changing Migration on the US-Mexico Border by Jeremy Slack. The majority of books tagged with “21st century”, however, are also tagged with “20th century”, “19th century”, “18th century” or even all the way back to “17th century” and “16th century”. Many of these volumes are expressly written or published on the occasion of some anniversary of the past events or subject they discuss, whether a semicentennial as in Ken M. Wharton’s Torn Apart: Fifty Years of the Troubles, 1969-2019, a centenary as in Paul Beaver’s The Royal Air Force: The First One Hundred Years, or even three centuries as in Rainer Vollkommer’s 1719 – 2019, 300 Jahre Fürstentum Liechtenstein.

A number of the new books on the shelves this November similarly cover events leading up to and including the 21st century, alongside a few which discuss exclusively 21st -century history, and books from both these categories are the volumes I would like to highlight in this month’s blog. 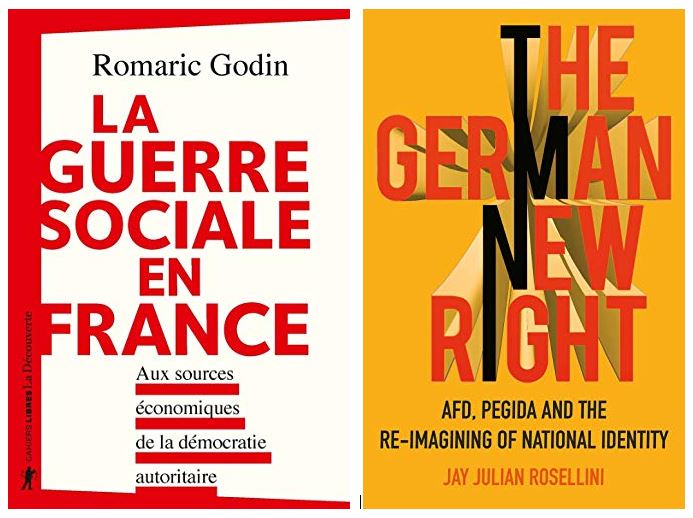 Two of the new books deal with truly contemporary social issues in Europe. Romaric Godin’s La guerre sociale en France examines issues of the neoliberal movement, capitalism, democracy, and authority, and Emmanuel Macron’s striving, and failing, to balance economics and social pressures in 2019 France. Jay Rosselini’s The German New Right takes on a similarly serious social crisis in Germany, the populist movement that rejects cosmopolitanism, globalisation and multiculturalism, and values tradition over innovation and change, and thus gave rise to such organisations as the Alternative für Deutschland (AFD) political party and the citizens’ group of “Patriotic Europeans Against the Islamisation of the Occident” (PEGIDA). Rosselini’s book aims to provide a portrait of both individuals and organisations, with a focus on cultural (rather than political) issues and figures that play a role in this movement, placing the New Right in the context of truly contemporary German culture and history. 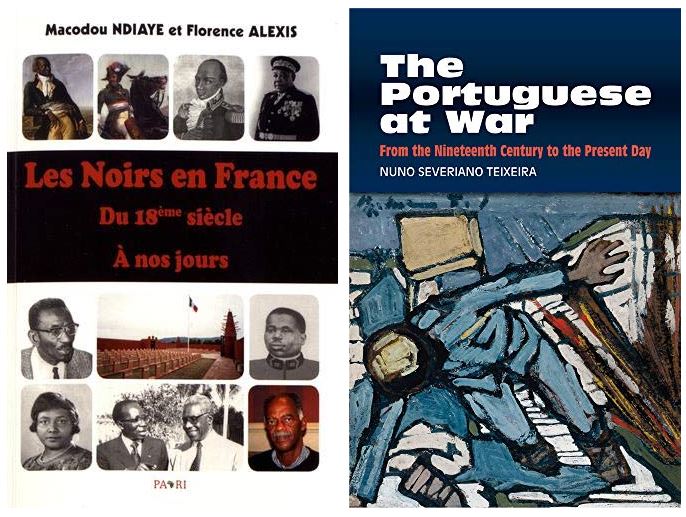 Two further volumes recently arrived look back over a few centuries in charting a development from the further past to the (almost) present. In Les Noirs en France du 18ème siècle à nos jours Macodou Ndiaye and Florence Alexis provide a history of black people in France from the first arrivals in the 18th century through the French Revolution and its struggle with the issue of the abolition of slavery, and then looking further afield to the revolt in Santo Domingo that led to the creation of the Black Republic of Haiti and the emancipation of the French West Indies. Moving into the 20th century they discuss the arrival of black Americans in France, the participation of black soldiers in the French army in the two World Wars, and the post-war years with their emancipation movements of Africans and West Indians, and the immigration policies of de Gaulle and of today. Portuguese history from the 19th century to the present day is covered by Nuno Severiano Teixeira in The Portuguese at War, which presents an overview of the conflicts, wars and revolutions in which Portugal was involved during that period. In this the volume covers issues from the Napoleonic invasions to the civil wars of the early 19th century, from participation in the First World War to neutrality in the Second during the 20th century, and from the country’s place in the NATO to peacekeeping operations in Kosovo, East Timor, Lebanon and Afghanistan in the 21st century. 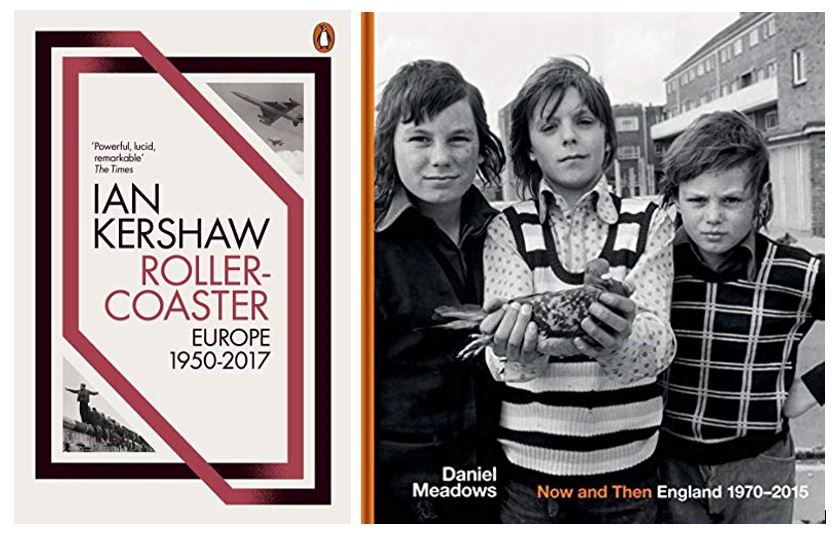 Looking back no more than 70 and 50 years respectively are the final two volumes I would like to introduce in this month’s blog. Following on from his 2015 book To Hell and Back, which charts the developments of Europe through the two World Wars from 1914 to 1949, Ian Kershaw’s Roller-Coaster: Europe, 1950-2017 looks at the vastly more peaceful and prosperous Europe that followed the wars. Kershaw discusses Europe’s transformation through economic improvements, though still under shadow of the war years to its life under the nuclear threat from both USA and USSR in the Cold War, through to the disbandment of the Soviet bloc and the reunification of Germany and finally to the years post-2008 after which peace and stability were brought into question again. Last but not least, Now and Then: England 1970-2015 by documentary photographer Daniel Meadows accompanies the exhibition of still photographs and moving images from the Bodleian Archives that were on display at the Weston Library from 4 October to 24 November, capturing 45 years of the life of England’s ordinary people. The volume contains samples of the full range of Meadows’ documentary projects over his 45-year career, with both portraits of the English people and the work they did. Including many now long-forgotten trades such as the engineer for a steam driven cotton mill and the steeplejack, and with a number of striking returns to people he had photographed 20 years earlier, it is a fascinating display of the differences and similarities between England Then and Now.

You can find all of the books tagged with “21st century” on our LibraryThing tag page here.