The annual Holocaust Memorial Day, which falls into this month and marks the day of the liberation of the Auschwitz concentration camp on January 27, 1945, is certainly already occasion enough to devote this month’s blog to new books on the history of World War II. This year of 2020, however, is of course the 75th anniversary of this event as well as of the swiftly following end of the Second World War. Holocaust Day is thus only one of a number of occasions this year which prompt us to commemorate and reflect on the events of the final months of the war in 1945, from the suicide of Adolf Hitler on April 30 to V-E Day on May 8, and from the bombing of Hiroshima on August 6 and V-J (“Victory in Japan”) Day on 15 August to the final surrender of Japan on September 2, which officially brought the hostilities of World War II to an end.

The famous and often-quoted words of the Spanish philosopher George Santayana that “those who cannot remember the past are condemned to repeat it” have surely never been as apt as with reference to the Holocaust – and to the worrying rise of neo-Nazis and re-emerging anti-Semitic sentiments in our 21st century. A number of new history books that focus on World War II strongly emphasise this “learning” from history – there is a distinct tendency towards fostering understanding about rather than documenting the events of the war, and rather than politics it is social as well as psychological aspects of the war which take centre stage in the more recent publications. A majority of the eleven new history books on World War II which the Bodleian has recently acquired (and I would like to highlight in this month’s blog) prioritize people over politics, and strive for an understanding of their lives and societies, personalities and emotions, influences and motivations in order to learn from the past, and to avoid repetition of it at any cost.

It is a truism that individual human stories can convey a sense of immediacy of history that even detailed facts or statistics can never hope to reach. This may be especially true in the case of the Holocaust, where even the horrifying number of 1.1 million dead in the Auschwitz-Birkenau concentration camp does not add anywhere near as much to our comprehension and understanding as the personal account of a single survivor. 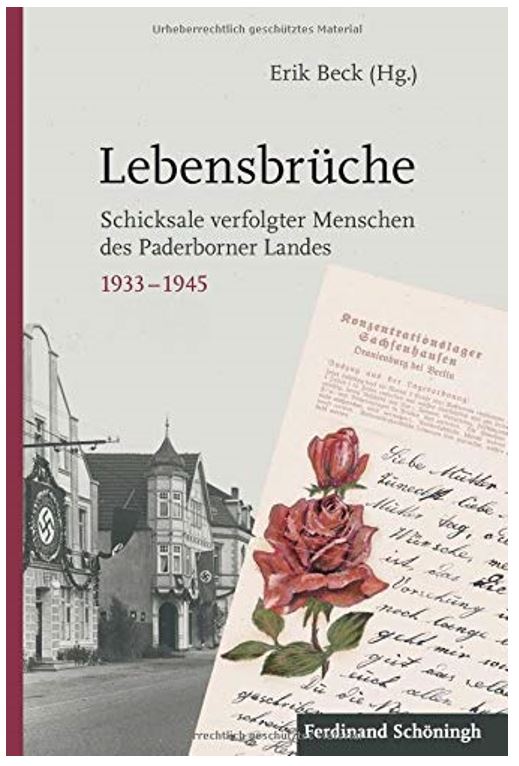 Erik Beck’s Lebensbrüche shows this clearly in its collection of ten stories of people from the Paderborn region of Germany who got caught up in the Nazi state’s machinery of persecution. The portraits of the emotional and mental lives of these victims of the Nazi regime uncover the structures of terror that pervaded society in this rural region. It stresses the wide-ranging and long-lasting consequences of the persecution which left survivors suffering mentally and physically, and also denounces the further injustice of lacking compensation or financial aid in their lives after the war.

In stark contrast to these tales, another three new books on offer a view from the other side of the divide – as promised in its title, Bernd Wegner’s Das deutsche Paris: der Blick der Besatzer 1940-1944 shows life in occupied Paris from the point of view of the German forces. The documentary collage presents a large variety of contemporary voices and images of the lives of German soldiers and civilian occupiers, lived between victory euphoria and fear of the future, and those of the occupied population, lived in a precarious balancing act between resistance and collaboration. Elizabeth Harvey similarly puts people and society in the foreground in her discussion of Private Life and Privacy in Nazi Germany, which focuses on the different ways in which Germans and German families, as well as ‘ethnic Germans’ in occupied Poland, and German Jews living in ghettos, tried to protect their privacy in the face of both the enthusiastically embraced notions of community and the pressure of the Nazi surveillance state. Harvey offers new insights into the degree to which the regime permitted or even fostered such aspirations, and offers some surprising conclusions about how private roles and private self-expression could be served by, and in turn serve, an alignment with the community. Inquiries not just into their private lives, but deep into the mind of the more radical Germans lie at the heart of Lothar Fritze’s Die Moral der Nationalsozialisten, which focuses on the self-image of Nazi perpetrators and the paradoxical way in which they justified their actions with their own moral beliefs, becoming “perpetrators with a clear conscience”. The study looks at the often-discussed “different morality” of the National Socialists and their mechanisms of self-justification, and shows how ideologically convinced Nazis made non-moral assumptions and held non-moral beliefs which led to rationally unacceptable and morally illegitimate justifications for their actions.

While thus individuals make history more immediate, there are also individuals who make history, full stop. A handful of the new books present biographies of some of the major players in the war, examining their deeds, their character, and their motivations as well as analyzing the impact their deeds had on the course of the war, and striving for an understanding of their personality and motivations.

Two Frenchmen and one German who played large or at least interesting roles on both sides of the battle lines stand in the centre of three of such biographical studies. Max Schiavon’s Les carnets secrets du général Huntziger (1939-1941) presents some of the personal notebooks of the controversial French general whose influential career included posts as head of France’s Second Army and leader of the negotiations of the 1940 armistice as well as commander-in-chief of the French land forces and Minister of Defence under the Vichy government. His notebooks, which unlike many other such documents remained unexpurgated and unedited after the war due to Huntziger’s accidental death in a plane crash, provide a wealth of information on contemporary political and military leaders, and their roles in the war. Somewhat less famous, and still influencing the course of the war in a rather different way, is another Frenchman, whose life and career is traced by Yves Pourcher in Le radio-traître: Jean Hérold-Paquis, la voix de la collaboration: a French collaborator and National Socialist, Jean Hérold-Paquis gained notoriety as a broadcaster with Radio Paris from 1942, and, after his flight to Germany in 1944, with Radio Patrie, and is still remembered for his catchphrase of “England, like Carthage, shall be destroyed!”. Pourcher traces the journalist’s career to its bitter end using the same archived audiotapes that served as evidence at his trial in 1945, which was rapidly followed by his execution on 11 October 1945 at the age of only 33. A German who gained fame of a completely different kind is the focus of Stauffenberg – mein Großvater war kein Attentäter: the Germany army colonel who was the driving force behind the failed assassination attempt on Adolf Hitler on July 20, 1944. In this study Stauffenberg’s granddaughter Sophie von Bechtolsheim presents her own very personal view through stories and memories of her grandfather and grandmother, family pictures, and the image of him presented in the media and in previous biographies. It is her attempt to free her grandfather from both the accolade of shining hero and the stigma of assassin, and to understand him as a man of his time. 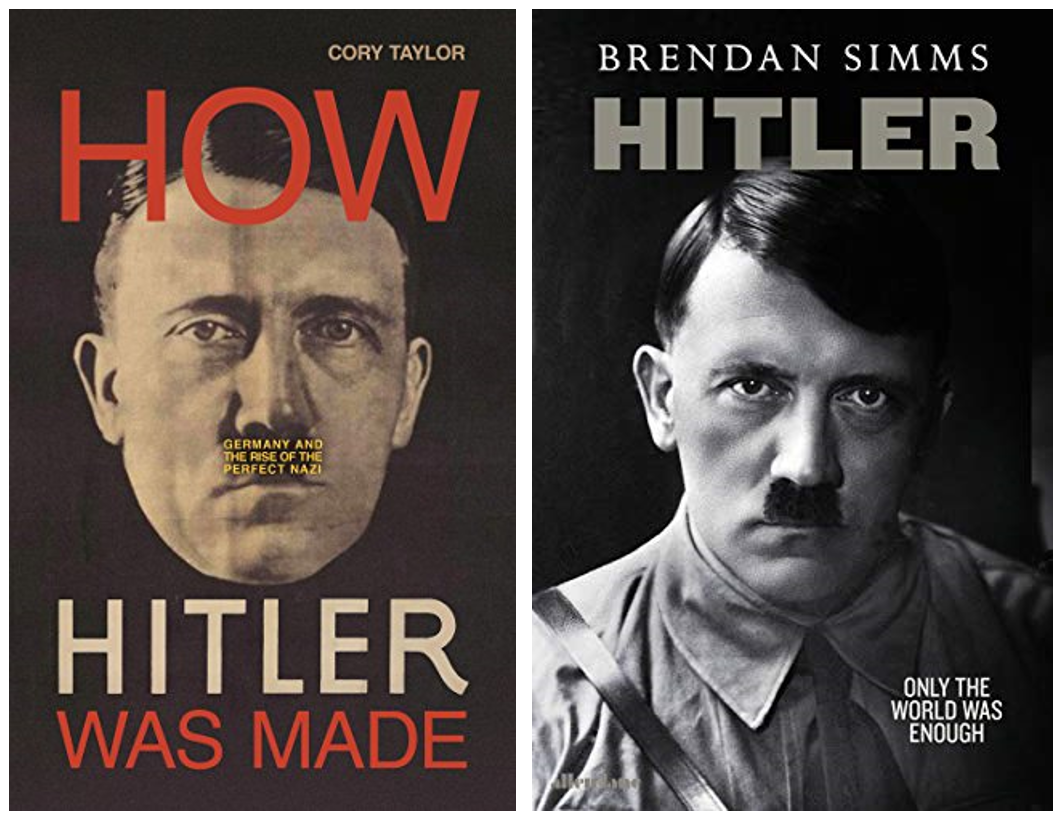 But however crucial any of these three men might have been to the course of the war, there is of course no single man who bears more responsibility than Adolf Hitler himself, who is the subject of two final two books in his list of new biographies from WWII. In How Hitler was made Cory Taylor uses archival research in Germany, England, and the US to analyse the political and social situation in Hitler’s formative period immediately following World War I (1918-1924). Much focus lies on the attempted socialist revolution in Bavaria and the right-wing extremists who groomed an obscure, embittered malcontent, and whose manipulation of facts and use of propaganda helped to prime the German public into readiness for a man with political cunning and oratorical powers who would blame Jews and Communists for all of Germany’s problems. Focusing on the same inter-war period Brendan Simms presents a detailed look into the mind, world views, opinions and especially ambitions of the later dictator in a new biography titled Hitler: only the world was enough, which traces the emergence of Hitler’s ideology following the First World War. Arguing that Hitler’s main obsession was not the threat of Bolshevism, but that of international capitalism and Anglo-America, Simms analyses Hitler’s view of the ‘Anglo-Saxons’ (the British Empire and the United States) as powers founded on appropriation of land, racism and violence: his determination to secure the ‘living space’ necessary to survive in a world dominated by these powers: and his desire to create a similarly global future for Germany by the same means.

The consequences of the WWII can be felt unto this day in innumerable aspects of our world, from the individual fates of Holocaust survivors to the political landscape of the entire European continent and to the way the modern world views ideological tendencies of Neo-Nazism or antisemitism. The final three books I would like to focus on in this blog deal with the aftereffects of the Second World War in only two relatively narrow spheres: the political climate and foreign policy of present-day Germany, and the legal aftermath of the drawn-out Nuremberg Trials which prosecuted prominent members of the political, military, judicial, and economic leadership of Nazi Germany for their war crimes.

In Normandie 1944 Jochen Thies labels the Allied Forces’ Normandy landings on D-Day, 6 June 1944, the “compass” of modern German foreign politics, and explains how the event still functions as a moral touchstone and source of a catalogue of values for international foreign policy in the Western world. His analysis sheds light on a number of decisions taken in matters of foreign policy by Western nations, and the author pleads for Germany to remain, both in mind and in deeds, an active part of this group, which is still the foundation of the global alliance that shares responsibility for the world we live in. A curious part of the war’s immediate legal aftermath is highlighted by Margaretha Franziska Vordermayer in Justice for the enemy?, which discusses military court cases in the British occupation zone, in which British officers served as lawyers for the German defendants opposite other British officers in the roles of prosecutors and judges, as an interesting form of transnational encounter. The suppression rather than execution of justice is then focus of NS-Justiz und Rechtsbeugung by Alexander Hoeppel, who opens up the question of why German practitioners of law were rarely sentenced for the crimes they committed during the Nazi era. Judging that the criminal punishment for the injustice committed by the judiciary in the Third Reich has failed, Hoeppel’s research into the legal reasoning on which these judgments were based reveals a case of “criminal self-immunization” in a development which, he claims, continues until this day.

You can find more of our books on the subject of the Second World War on our LibraryThing shelf tagged with “World War II“, “Holocaust“, “National Socialism/Nazism“, or “Adolf Hitler (1889-1945)“.