The question of what makes a man a man, or what exactly is meant by “masculinity”, is one which has been asked innumerable times in recorded history in sources as different as ancient theatre and medieval chronicles, early modern letters and nineteenth-century pedagogic tracts, or 20th-century movies and self-help books. Humans, both men and women, have tried to answer it in a similarly wide range of media, not only explicitly in academic papers and studies, but both explicitly and implicitly in self-help manuals, popular culture, feminist ideas, psychoanalytic theory, or simply in the daily interactions between boys and their fathers, husbands and wives, or children and their teachers.

Ideas of masculinity are inextricably intertwined with history – in their volume on What Is Masculinity? Arnold and Brady explain that the habit of masculine domination is bound so closely both to social power and to the idea of “how things are” that it is a prime example of “history turned into nature” (p. 1). There is, then, a question of whether there is a need for a “men’s history”, or a “history of masculinity” at all – as highlighted in the March edition of this New Books blog, the aim of the feminist movement and women’s history often is to re-balance history and redress the exclusion of women from it. But since men, their lives, and their activities in the public sphere are already the substance of traditional historiography, is there really a need to re-examine historic masculinities today?

Sussman in his Masculine Identities argues that it is specifically the conflict between the historical (or even pre-historical) male image with the realities of male life today that accounts for much of the questions about and discontent with their identity in contemporary men. There is no doubt that the question is very much part of our contemporary culture – while originating in the 1990s, the term “toxic masculinity” came to prominence in media use only in the 2010s; the coinage, only half a decade ago, of such emotionally and culturally charged portmanteaus as “mansplaining” and “manspreading” points to a very current discussion of masculinity and male stereotypes; and the #MeToo movement just over two years ago highlighted a widespread hegemonic masculinity even in countries which are considered frontrunners of gender parity.

One argument for a history of masculinities is that the flip side of privilege is disadvantage, and while undoubtedly men as a group are privileged, there is much insight to be gained from considering the costs of such privileges and the ways in which not all men are granted equal access to them, whether on account of their race, class, or sexuality – similar to women’s history, gay history is a historiography which charts repression, resistance and self-discovery. The main argument for a history of masculinities, however, is that masculinity really only has meaning in relation to other identities, whether of gender, sexuality, class, age, religion, or culture – contextualisation and interconnectedness are the crucial factors. Any historical approaches to masculinity thus never stands alone – rather than a free-standing strand, the history of masculinities today can be understood as an enrichment of a large variety of other emphases, from the history of the family to women’s history, post-colonial history, workers’ history, political or cultural history. As John Tosh explains it in his chapter on “The History of Masculinity: An Outdated concept?“, a historical perspective and experience within our lifetimes shows manliness as constructed by culture and also changed by it, so that masculinity “takes its place as one lens, among several, through which the texture of society and culture may be more fully understood” (p.20). This is also the reason that we speak of masculinities in the plural, rather than masculinity in the singular – to account for the many variations of the concept in different historic era and cultures, but also in the self-perception of the individual. The new eBooks on the topic of masculinities which have been added to the Bodleian over the past weeks, and which I would like to highlight in this blog, take full advantage of the potential widths and depths of this field, and study masculinities in historic eras from Antiquity to the present, in connection with issues from class to politics, religion and magic, and in relationships from homosocial to homosexual. 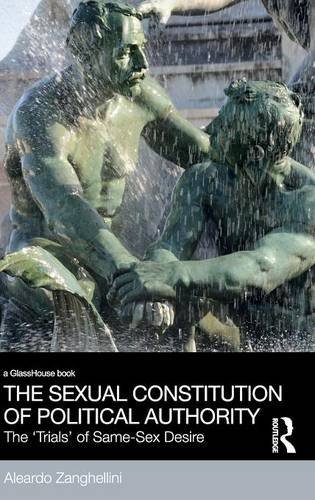 In a fascinating piece of macrohistory spanning historical eras from Antiquity until late Modernity, Aleardo Zanghellini’s The Sexual Constitution of Political Authority looks at the issues of sex and power, specifically related to homosexuality. He examines the relationship between ideas of political authority and male same-sex desire in a series of case studies of statesmen whose (sometimes only alleged) homosexuality was seen to problematize the good exercise of public powers. Studying the sometimes literal, sometimes metaphorical “trials” of same-sex desire, the book begins with the Roman emperor Hadrian and moves on to the Middle Ages and early modern period with chapters on the English kings Edward II and James I, through the Victorian Age with the Dublin Castle and the Cleveland Street scandals of the 1880s, and finally to the 20th century with the McCarthy-era and the 1950s Montagu-trials which led to the decriminalisation of homosexuality in Britain. 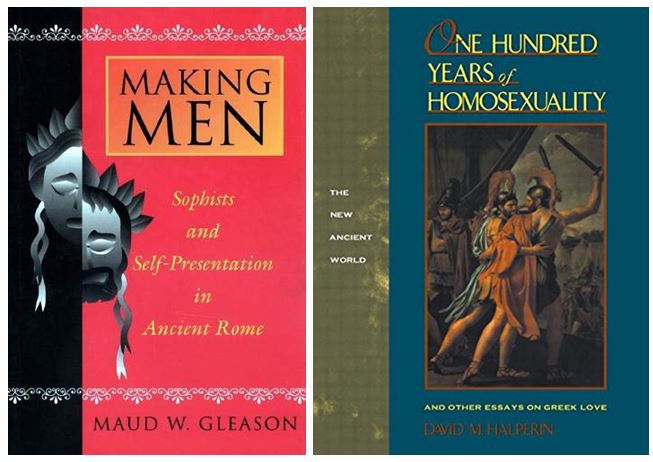 Situated at the early end of these historic eras, in ancient Rome, Maud W. Gleason’s Making Men on the other hand is a fascinating piece of microhistory which compares the careers of two popular 2nd-century public speakers. Celebrities in their day, the differences of self-presentation in features such as gait, gesture, facial expression, and voice between the orator Favorinus, a eunuch, and Polemo, a man who met conventional gender expectations, offers many insights into the ways ancient Romans constructed masculinity during a time marked by anxiety over manly deportment. Halperin’s One Hundred Years of Homosexuality is another study which focuses on the question of masculinity and more broadly sexuality in Antiquity, with a look at the original “Greek love” and the erotics of male culture in ancient Greece. Contrary to his title, however, Halperin argues that the modern concept of “homosexuality” is actually inadequate for understanding this facet of sexual life in this period, and instead urges us to look at the native Greek terms which contenporaries used to construct sexuality and sexual experiences in the ancient Mediterranean world. 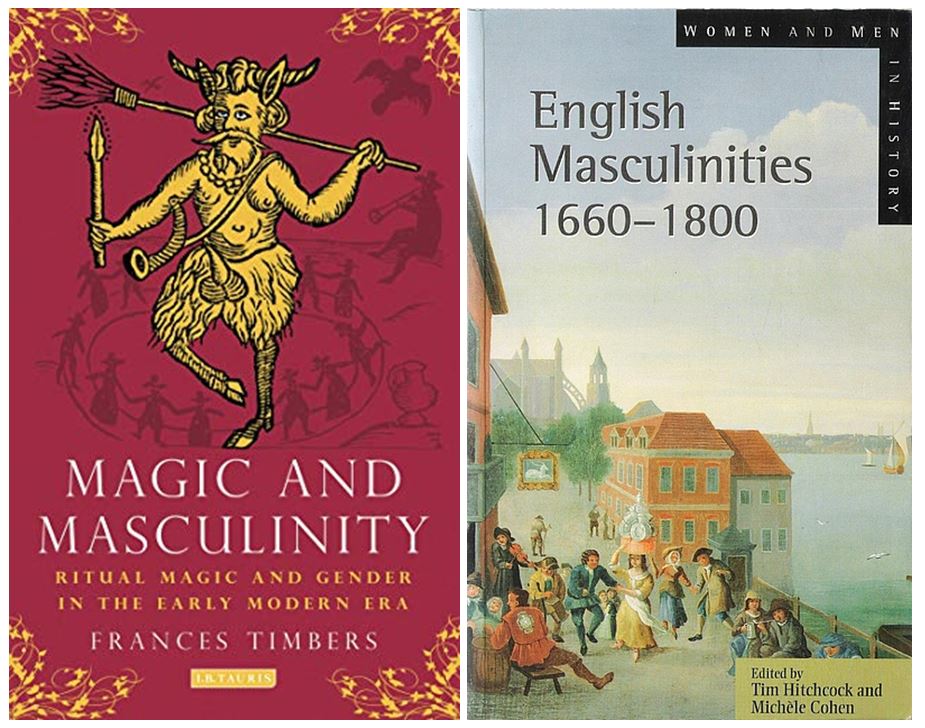 For the early modern era, Frances Timbers singles out one particular facet of cultural history to examine gender in her Magic and Masculinity, with a study of how in early modern England, the practice of ritual or ceremonial magic both reinforced and subverted existing concepts of gender. Drawing on  records of well-known magicians such as John Dee as well as unpublished diaries and journals, contemporary literature and legal records, her examples include a wide range of practitioners from male magicians in their customary patriarchal positions of control to those who used the notion of magic to subvert gender roles, and to females who employed magic to undermine the patriarchal culture. A wider view of early modern English gender is taken by the contributors to English Masculinities, 1660-1800, a collection of specially commissioned essays which draws on diaries, court records and prescriptive literature to provide a social view of the masculine identities of late Stuart and Georgian men – from fops to gentlemen, blackguards to men of religion, and heterosexuals to homosexuals. In their efforts to explore the complex and disparate masculinities enacted by the men of this period, the different contributions touch on such a variety of topics as the correlations between masculinity and Protestantism, the connection of masculinity with taciturnity, the impact of changing representations of homosexual desire, misogyny, the literary and metaphorical representation of the body, and the roles of gossip and violence in men’s lives.

Starting in the Victorian era, but moving into the later 20th century, Masculinities and the Nation in the Modern World provides some fresh perspectives on the role of masculinities in various processes of nation-building in the modern world between the early nineteenth century and the 1960s. The contributions concern the production and perpetuation of nationalized hegemonic masculinities in Western societies, highlighting their ambiguities in transnational contexts created by colonialism and imperialism, where transnational processes of exchange, translation, and adaptation allowed Western nations to subdue and marginalize non-Western and non-white masculinities. The individual papers collected in this volume discuss these issues with respect to the Confederate States in the 1860s, Mormon polygamy, the American family of the early 20th century, the masculine ideal in fascist Italy, competing notions of masculinity in the United States and Nicaragua, the emasculation of the Mexican community in the second half of the 19th century, or martial masculinities in late Meiji Japan. Taking up the thread at the turn of the 20th century is Helen Smith’s Masculinity, Class and Same-Sex Desire in Industrial England, 1895-1957, which explicitly focuses on the experiences of working-class men in areas outside of London, and in this offers not only a new chapter in the history of homosexuality, but also widens our more general understanding of masculinity, working-class culture, regionality and work in the period. Drawing on a wide range of primary sources on the lives of men who have been forgotten, Smith shows how, contrary to perceived ideas, same-sex desire could be a part of everyday life in the industrial towns of early 20th century England. 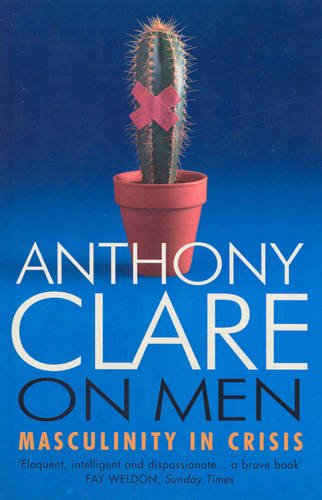 Finally, Anthony W. Clare’s On Men: Masculinity in Crisis offers an exploration of the challenged state of masculinity in a post-feminist society of gender equality at the turn of the 21st century. With shifting gender roles many men have lost their traditional position of  provider for their families, and modern law, family constellations and medical advances mean that men are also getting pushed out of similarly traditional roles as protectors, parents, and even procreators. Male violence is no more a source of honour and pride, but a threat to our culture and civilisation, and the dying-out of the assertive, authoritative, dominant man is mirrored by a rise in male suicides. Practising psychiatrist Clare brings his knowledge of science and medicine as well as his understanding of the human mind to this readable, fair-handed and sympathetic examination of the male in today’s society.

You can find all new eBooks on our LibraryThing shelf here, and more books on this topic tagged with “masculinity” here.