I am pleased to report that Oxford users now access to the online Records relating to the slave trade at the Liverpool Record Office (British Online Archives: British Records on the Atlantic World, 1700-1900) via SOLO and Databases A-Z. 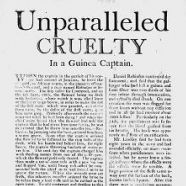 This full-text database provides access to one of the best collections in British archives of private merchants’ papers relating to the transatlantic slave trade.

Liverpool was the leading slave trading port in the world in the eighteenth century when these documents were compiled.

Enjoy! If you have any problems, please contact library staff.