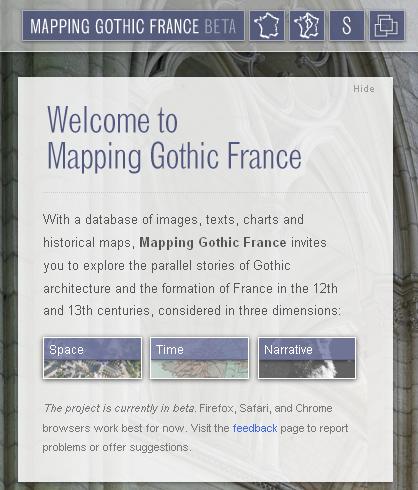 Vassar’s Andrew Tallon and Columbia’s Stephen Murray have recently unveiled their digital project to document the architectural monuments of 12-13-century France, entitled “Mapping Gothic France”.  This is an open-source, open access project available on the web at: www.mappinggothicfrance.org

The site consists of hundreds of dynamic, panoramic images, mapped to each monument, and accompanied by contextual materials including historical texts, time-lines, interactive maps, and biographies of scholars.  It also contains tools for comparative study.

“Whereas pictures can be satisfactorily represented in two dimensions on a computer screen, space — especially Gothic space — demands a different approach, one which embraces not only the architectonic volume but also time and narrative. Mapping Gothic France builds upon a theoretical framework derived from the work of Henri Lefèbvre (The Production of Space) that seeks to establish linkages between the architectural space of individual buildings, geo-political space, and the social space resulting from the interaction (collaboration and conflict) between multiple agents — builders and users. “

The site is currently in beta mode, but functioned well in Firefox when we used it.  The project uses the dimensions of space, time and narrative to structure the project.  Very detailed information pages about churches, such as the Cathedrale de Notre-Dame in Amiens, include various images, floor plans, further architectural description and information about each church’s political significance.  Not all entries have the same level of detail, some have only images and floorplans.  The comparison tool allows churches to be compared using dimensions and construction dates.  The time dimension merges the churches on the project’s map with existing maps showing contemporary geopolitical divisions.

ARTstor has added a new image collection which might be of interest to medievalists historians:

“ARTstor and Via Lucis have released more than 1,300 high-resolution images of medieval Christian churches in France and Spain by photographers Dennis Aubrey and PJ McKey in the Digital Library. The collection primarily features interior architecture, especially the arches, vaults, domes, and buttressing that define the Romanesque and Gothic styles. The collection also features a selection of images of the Vierges Romanes, stylized wooden statues of the Madonna and Child from the 11th century to the 13th century, usually polychrome but sometimes covered in plate and jewels. A subset of these sculptures includes the Black Madonnas, which are particularly venerated in Spain and France.  The Via Lucis collection also includes images of church exteriors.”

Oxford users can view the Via Lucis collection or enter the keyword search: “Via Lucis”.