We are pleased to announce that Oxford users now have access to Translated Texts for eHistorians.

TTeH makes available sources translated from Greek, Latin, Syriac, Coptic, Arabic, Georgian and Armenian, published between 300 and 800 AD. This period, from late antiquity to the early middle ages saw the transformation of the classical world, the beginnings of Europe and of Islam, and the evolution of Byzantium. Each volume provides an expert scholarly translation, with an introduction setting texts and authors in context, and with notes on content, interpretation and debates. 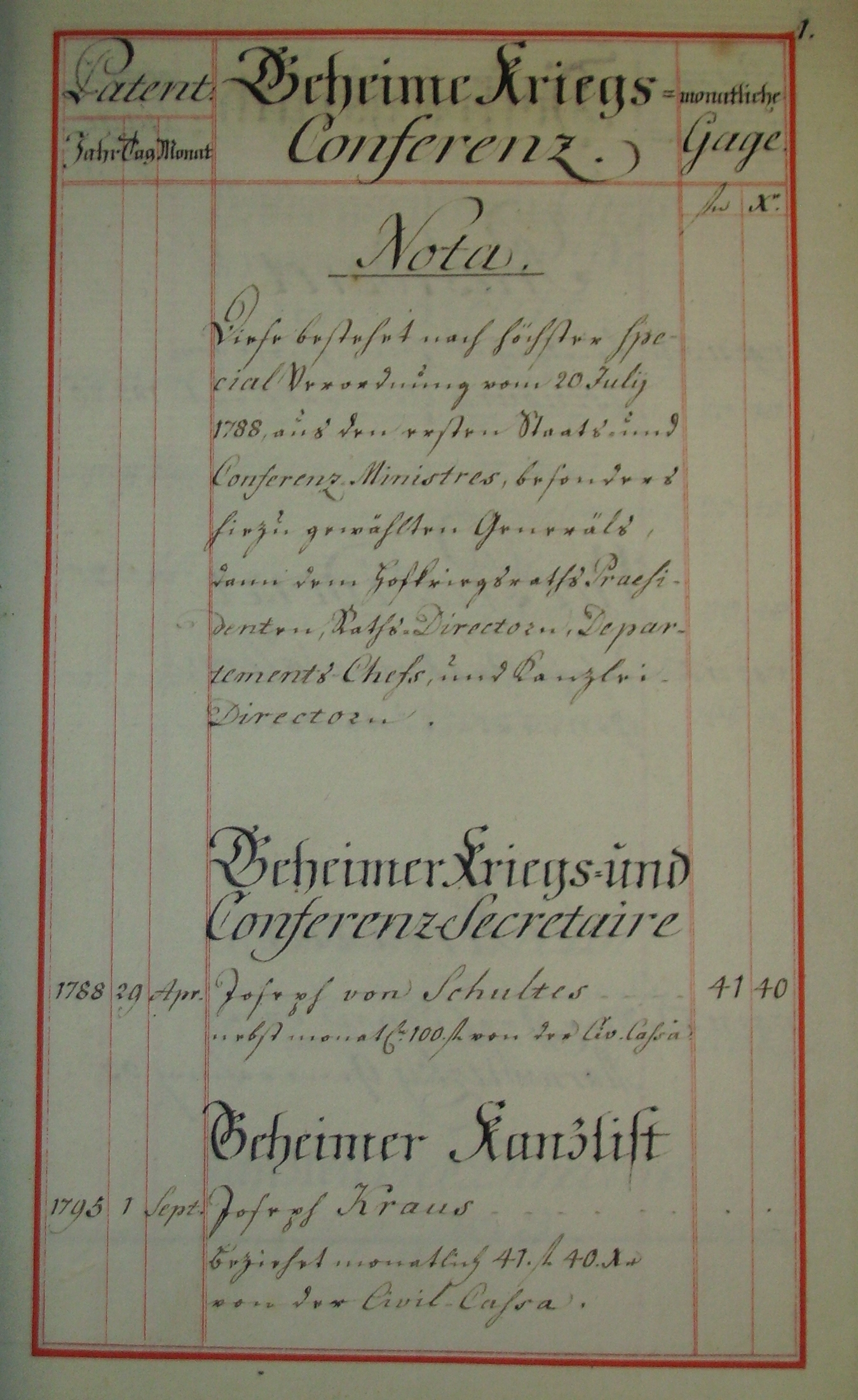 Chürpfalzbaierische militair Etat, an 18th-century manuscript in the collection

This is a guest post from Clare Bristow, the HFL’s Graduate Trainee in 2010-11, on her final day:

Over the past year, I have been working on a project making an inventory of the HFL’s collection of antiquarian books, which are kept in closed stacks.  This involved looking through over 500 volumes and recording their bibliographic details and any features of interest such as provenance or annotations.

The HFL Rare Books blog is the outcome of this project.  It contains details of all the books, most of which are not on SOLO.  Here, you can browse the collection by author, date, publisher and place of publication, or use the tags to find books of a particular provenance.

The books are available for use by registered library readers – just ask a member of staff in the library, or contact us.

I hope the Rare Books blog will help to make readers aware of some of the uncatalogued gems in the HFL, and the varied backgrounds of the library’s collections.  This collection is particularly strong in British history, including long runs of parliamentary source material such as Journals of the House of Commons and Public General Statutes.

On a personal note, I would like to thank all the staff and readers who have made my year in the HFL so enjoyable and worthwhile, and wish all the best to next year’s Graduate Trainee.

ProQuest Dissertations and Theses — Full text is a comprehensive collection of dissertations and theses and includes millions of searchable citations to dissertation and theses from around the world, though largely from the US, covering 1861 to the present day. The database offers full text for most of the dissertations added since 1997 and strong retrospective full text coverage for older graduate works. Oxford has access to the Humanities and Social Sciences collections.

Full Text dissertations are archived as submitted by the degree-granting institution. Some will be native PDF, some PDF image.

Please note that while you can do full-text searching across the dissertations, the database doesn’t take you there and subsequent PDF searching doesn’t seem to work. We will report this to the provider.

It gives us great pleasure to announce some end-of-year purchases of major databases.

They can all be accessed via OxLIP+ and will be added to SOLO shortly. Oxford users have remote access and should use their Single Sign-On username and password. All other readers are welcome to use the databases in any of the Bodleian Libraries. Want to register as a reader? Check out our Admissions page.

Early European Books builds upon and complements Early English Books Online (EEBO) and is largely concerned with non-Anglophone materials. All works printed in Europe before 1701, regardless of language, fall within the scope of the project, together with all pre-1701 works in European languages printed further afield.

Collection 2 contains early printed volumes from the Biblioteca Nazionale di Firence (National Central Library of Florence). The selection of works focuses on four collections of particular historic and bibliographic importance within the library’s holdings from this period:

The Nencini Aldine Collection. More than 1,000 editions printed by the Aldine Press, founded by Aldo Manuzio the Elder (also known as Aldus Manutius) in Venice in 1495, and continued by his wife, son and grandson until the 1590s. The Aldine Press was one of the most historically significant institutions in the early history of printed books, with numerous innovations including the first use of italic type and the adoption of the smaller, more portable, octavo paper size.

Marginalia. A collection of more than 80 sixteenth- and seventeenth-century volumes which have been identified for the importance of the postillati, or marginal annotations. Researchers will be able to read marginal notes written by Galileo Galilei (1564-1642) on his own personal copies of works by Euclid, Petrarch, Ariosto, Tasso and Horace. Other notable authors include Michelangelo Buonarroti the Younger (nephew of Michelangelo the painter and sculptor), the playwright Lodovico Castelvetro and the poet Alessandro Tassoni. Continuing the astrological theme, there are also editions of works by Galileo and Johannes Kepler with annotations by Galileo’s follower, the mathematician and scientist Vincenzo Viviani (1622-1703).

Incunabula: almost 1,200 volumes, including rare first editions of the works of Dante, Petrarch and Boccaccio, and 100 volumes by the controversial preacher Girolamo Savonarola (1452-1498).

Sacred Representations. Over 600 sixteenth- and seventeenth-century editions of sacre rappresentazioni, popular verse plays depicting Biblical scenes, episodes from the lives of the saints and Christian legends, which were originally performed in Florence and elsewhere in Tuscany and are considered by scholars to form the foundations of Italian theatre. Although many of the texts are anonymous, those by named authors include Castellano Castellani’s Figliuol prodigo and Lorenzo de’ Medici’s Rappresentazione di San Giovanni e Paolo.

The Spectator is an important British weekly magazine which is generally considered to be a right-of-centre and conservative magazine. It focuses largely on political and cultural aspects.

The Financial Times Historical Archive provides an online, fully-searchable facsimile run of the London edition of the FT, from its first issue in 1888 to the end of 2006. Each item in this complete collection is categorized by both subject and topic, with every individual article, advertisement and market listing included and searchable for retrieval individually and in the context of the full page and issue of the day.

The latest update to Mass Observation Online will see a further 200,000 pages added to the resource, bringing the total to around half a million pages of unique material for the study of Britain, 1937-1955. All material for this section has been digitised in colour.

The Foreign Broadcast Information Service (FBIS) Daily Report has been the United States’ principal record of political and historical open source intelligence for nearly 70 years. The original mission of the FBIS was to monitor, record, transcribe, and translate intercepted radio broadcasts from foreign governments, official news services, and clandestine broadcasts from occupied territories. FBIS Daily Reports, 1974–1996 constitutes a unique archive of transcripts of foreign broadcasts and news that provides insight into the second half of the 20th century; many of these materials are firsthand reports of events as they occurred.

FBIS Daily Reports, 1974–1996 consist of translated broadcasts, news agency transmissions, newspapers, periodicals, and government statements from nations around the globe. These media sources were monitored in their languages of origin, translated into English, and issued by an agency of the US government

Perdita provides access to the manuscripts of early modern women writers, from diaries to works of drama, and from widely scattered locations. Detailed catalogue descriptions are linked with complete digital facsimiles of the original MSS, providing a wide variety of search and browsing options. There is extensive biographical information, notes on provenance, bibliographies, the first and last lines of all poetry, and contextual essays and notes on ‘Perdita in the Classroom’.

The electronic edition of Heinemann’s African Writers Series, providing searchable online access to the founding works of modern African literature from 1962-2003, mostly now out of print. Over 260 volumes of fiction, poetry, myths, drama, memoirs and reportage are included from a wide geographic range across Africa, mostly written in English but including some translated volumes. Each work is available in full text, re-keyed from authoritative editions, and every author has an author page with links to all their works and a biography specially commissioned for the collection.

We are pleased to report that the trial for Izvestiia Digital Archive 1917- went well and that the Slavonic and Russian Subject Consultant has now secured access to it.

This session will demonstrate the online House of Commons Parliamentary Papers database. The resource includes 200,000+ sessional papers from 1715 to the present, with some supplementary material going back to 1688. This training aims to show how to make best use of complex material. Hands-on will be provided.

Read all about it!: Making the most of online Historical Newspapers

EEBO is an important database of early printed books from 1475-1700. If you need tracts, texts and pamphlets written in Britain and colonial America in this time, then this hands-on session will show how to search, manipulate and print the text.

Latest update to the Oxford Dictionary of National Biography

First published in 2004, the Oxford DNB is now extended online every January, May, and September. The May 2011 update – the 20th since 2004 – is now available with a special focus on the history of modern Wales and Victorian genre painters.

May’s update also completes a 3-year project to provide a complete, and unique, biographical record of every English bishop from the Norman conquest to the Reformation. The complete listing will allow researchers to search across biographies to study the medieval episcopacy in new ways. To mark completion of the project its editor, Dr Henry Summerson, asks whether bishops were Born to rule?

As well as new people, ODNB updates add essays on well-known historical groups and networks, showing how people worked, or played, together. The ODNB now includes nearly 300 group essays, from the 6th century Gregorian mission to the Angry Young Men. New groups in May include the Primrose League, the Happy Valley set, and the Gang of Four; plus the Knights of the Round Table and Robin Hood’s Merrie Men.

More essays will be added in future updates, with a current list of ODNB Themes available here.

Our subscription to the electronic version of the New York Times Historical Archive now includes the New York Times Index. This is the digitised version of the print index volumes (which are in the VHL’s reference section on the ground floor), fully integrated into the online archive of the newspaper. Please note, however, that while the NYT itself is available up to 2007, the Index stops in 1993.

When searching the archive, you will now find that in the advanced search screen you can search fields specific to the Index  both on their own and together with the full text/citation/abstract fields that were already available. They are Company/Organization, Creative Work, Location, Person and Subject. Search results will now be enhanced with information from the index (click on ‘abstract’).

The New York Times Historical Archive is available via OxLIP+. Use single sign-on for remote access.