Following a successful trial in October 2019, I am pleased to announce that Oxford researchers now have access to Bloomsbury Medieval Studies (SSO required for off-campus access).

This purchase is made possible thanks to the generosity of Jonathan Glasspool, Managing Director, Bloomsbury Publishing Plc. and the Madeline Barber Bequest.

This is an interdisciplinary digital resource with a global perspective covering the medieval period. It brings together high-quality secondary content with visual primary sources, a new reference work and pedagogical resources into one cross-searchable platform, to support students and researchers across this rich field of study.

Specifically, the resource contains over 150 scholarly works (incl. primary texts, research monographs, companions) which have been published by Bloomsbury and other publishers such as IB Tauris, Arc Humanities Press, Amsterdam University Press.

It also contains a newly published reference work (The Encyclopedia of the Global Middle Age) and over a 1000 images sourced from collections in the British Library, Metropolitan Museum of Art and Senate House Library (London).

Explore articles written by top international contributors in the newly commissioned and exclusive reference work, the Encyclopedia of the Global Middle Ages.

We are pleased to announce two sessions of interest to Postgraduates studying ecclesiastical history:

Ecclesiastical History for postgraduates: Introduction to using the Special Collections at the Weston Library

This session will provide a practical introduction to using special collections at the Bodleian Libraries. We will outline the nature of the main Bodleian collections and explain how to find research material using online and printed finding aids. (This will include practical exercises for which a laptop will be useful.) We will end with the practicalities of ordering and handling manuscripts and how to cite them in your work.

Please note that there is limited availability. Email Isabel.holowaty@bodleian.ox.ac.uk if you are interested.

Please note that there is limited availability. Email Isabel.holowaty@bodleian.ox.ac.uk if you are interested.

This is a new interdisciplinary digital resource with a global perspective covering the medieval period. It brings together high-quality secondary content with visual primary sources, a new reference work and pedagogical resources into one cross-searchable platform, to support students and researchers across this rich field of study.

Specifically, the resource contains over 150 scholarly works (incl. primary texts, research monographs, companions) which have been published by Bloomsbury and other publishers such as IB Tauris, Arc Humanities Press, Amsterdam University Press.

It also contains a newly published reference work (The Encyclopedia of the Global Middle Age) and over a 1000 images sourced from collections in the British Library, Metropolitan Museum of Art and Senate House Library (London).

The trial ends on 29 November 2019. Feedback should be sent to isabel.holowaty@bodleian.ox.ac.uk. 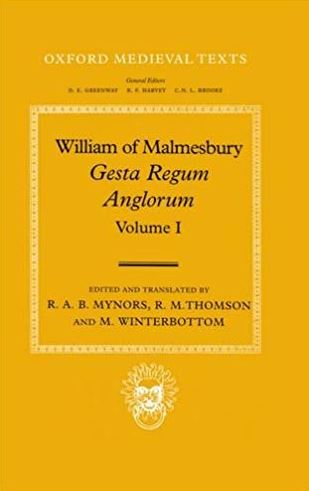 You now have online access to some of OUP’s Oxford Medieval Texts volumes via Oxford Scholarly Editions Online (OSEO) which is accessible via SOLO.

Oxford Medieval Texts (OMT) is an important series of published scholarly editions of selected key Latin texts relating to the history of medieval Europe. Authors include, for instance, Abelard, Bede, Malmesbury, Saxo Grammaticus, and others.

The critical texts are accompanied by a full scholarly apparatus and include a commentary and English translations on facing pages.

Currently 31 ebooks in the OMT series are now available.

This subscription is made possible thanks to the generosity of the Madeline Barber Bequest.

The earliest OMT example in OSEO is

The Bodleian hardcopy of the OMT series is in the Upper Reading Room (URR), Old Bodleian Library, at shelfmark K.7.34.

Check here for a full list of the 100+ titles in this series. 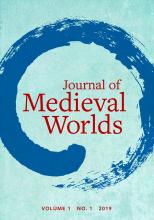 Medievalists will be pleased to learn that you have access to the very newly published Journal of Medieval Worlds (ISSN 2574-3988), joining two other global medieval journals already available in Oxford (The Medieval Globe, Medieval Worlds). The subscription is funded thanks to the Madeline Barber Bequest. It can be accessed via SOLO.

Journal of Medieval Worlds is a new peer-reviewed  academic journal, published quarterly by University of California Press. It aims to disseminate multi-disciplinary research on the global medieval world, primarily covering the period 750-1600. Its purpose is to “explore interconnections across regions and build meaningful comparisons across cultures”.

The strong multidisciplinary approach is evident: “Fields and topics addressed in the journal include, but are not limited to, Archaeology, Cultural Geography (including Cartography), Economics, Gender and Sexuality, History (including Cultural History), History of the Arts (including Architecture, Art, and Music), Law, Literature and Rhetoric, Material Culture (including Codicology, Epigraphy, Numismatics, and Papyrology), Historical Demography, Philology, Philosophy, Religion, Science (including Medicine and Technology), and Theology.”

As well as research articles, the journal will also publish reviews of books, textbooks, and relevant exhibitions, as well as essays and features on pedagogy.

In the inaugural issue, the Editor’s Remarks by Edward D. English and Oxford’s very own Peter Frankopan‘s “Why we need to think about the Global Middle Ages” set out the intellectual aims of the journal in more detail.

You can set up RSS feeds or eToC alerts if you want to be kept informed of new articles, reviews, etc.

Medievalists will be pleased to know that you now have online access to The Medieval Globe, v. 1(2014)- present. This subscription resource is funded thanks to the Madeline Barber Bequest. 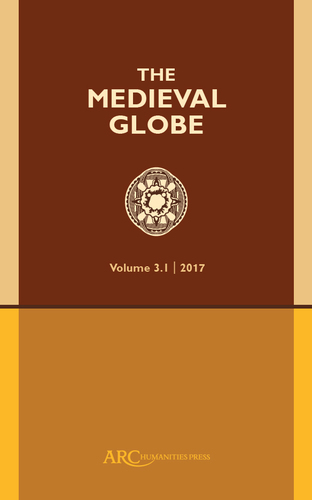 The Medieval Globe [ISSN 2377-3553] is a peer-reviewed journal, published bi-annually, It was launched in November 2014 with a special issue on the Black Death as a global pandemic.

The journal explores the modes of communication, materials of exchange, and myriad interconnections among regions, communities, and individuals in an era central to human history. It promotes scholarship in three related areas of study:

It is relevant to those working on Medieval Studies, Areas Studies and Global History. The materials published in this journal include articles, review essays, scholarly dialogues, multi-authored discussions, and editions or translations of source materials.

The Medieval Globe is the latest in a series of scholarly journals following the global shift and which are available in Oxford. These are:

Other HFL news on medieval resources.

I am delighted to announce that thanks to a generous donation, the Bodleian Libraries has 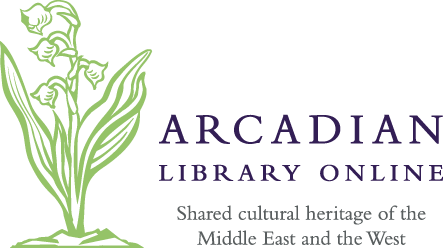 been able to purchase Arcadian Library Online: History of Science and Medicine collection.

This online resource enables easy exploration of the rich holdings of the Arcadian Library. A privately-owned collection of rare ancient manuscripts, early printed books, and documents from the 10th to 20th centuries, the Arcadian Library collects the shared cultural heritage of Europe and the Middle East.

The first module of this online resource, the History of Science and Medicine collection, contains the contributions of early Arab and Persian scientists, doctors and thinkers; their translation, reception and influence in Europe and their lasting influence on the development of Western scientific and medical knowledge. It also brings together 19th and 20th century records of science, medicine and natural history from across the Eastern Mediterranean and Middle Eastern regions.

There are texts on

I recommend browsing by period, place, people, topic, language and content type to get a sense of the scope of this curated collection.

The vast majority of the content comes from printed works and are in Latin. Texts are also in Arabic, Dutch, English, French, German, Greek, Hebrew, Italian, Persian and Spanish. The medieval and early modern periods are particularly strong.

In due course the bibliographical details of each item in this collection will also be discoverable in SOLO.

Oxford researchers will be pleased to know that Ambix: the Journal of the Society for the

Study of Alchemy and Early Chemistry is now available online, starting with volume 44 (1997). For issues before that date, you will need to consult the printed copy.

“Ambix is an internationally-recognised, peer-reviewed journal and the leading specialist publication in its field, which is viewed as a major outlet for current research. Published four times a year, in February, May, August and November, its remit is to facilitate the publication of high-quality research and discussion in all areas relevant to the history of alchemy and chemistry, including:

The Journal’s scope extends to the history of pharmacy and chemical medicine, environmental studies of the chemical industry, and the material and visual culture of chemistry. ” (https://www.tandfonline.com/action/journalInformation?show=aimsScope&journalCode=yamb20, accessed 15 May 2018)

Ambix also publishes reviews in English of books dealing with any aspect of the history of alchemy and chemistry.

I am pleased to report that Oxford researchers now have access to Brepols Medieval Collection, a major electronic resource for medievalists. It provides online access to books and articles in key subject areas in European Medieval Studies such as Church History & Monasticism, Language and Literature, Manuscript Studies, Philosophy, Theology and History of Science.

This resource was funded thanks to the generosity of the Madeline Barber Bequest.

Books included are published in series such as Culture et société médiévales, Europa Sacra, Utrecht Studies in Medieval Literacy, Medieval Church Studies, Collection d’études médiévales de Nice, Studies in European Urban History (1100-1800) and more. Please note that not all volumes in a series may have been digitised.

The monographs will currently not be catalogued in SOLO (under investigation). I would expect the books and articles to be indexed in the International Medieval Bibliography (IMB) (Oxford users only). To find Brepols publications in IMB, add “Brepols” to the All Field in Advanced Search.

Please note that you will be directed to the Brepols Online portal which will also include ebooks outwith Brepols Medieval Collection. Look out for the green button which indicates free access: 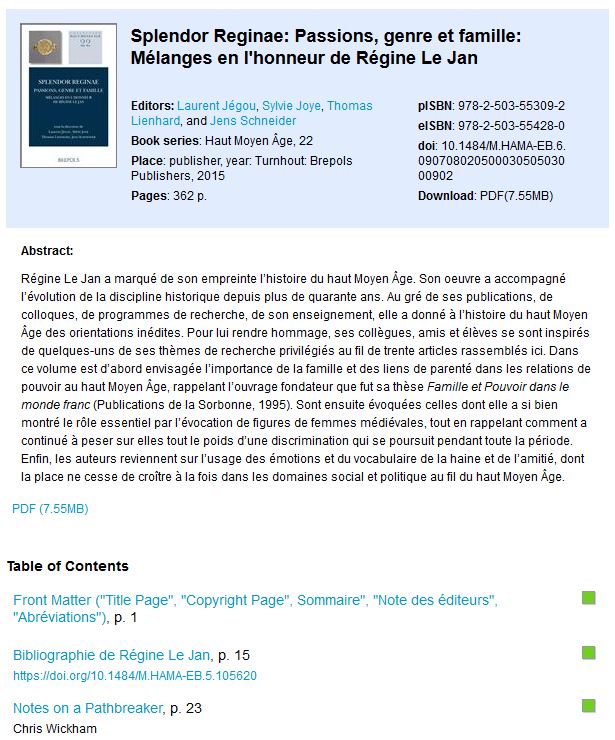 Oxford medievalists, you will be delighted to know that you now have online access to Brill’s Encyclopedia of the Middle Ages. Access is via Databases A-Z and soon also via SOLO.

This authoritative reference work covers medieval European history, culture, religious and intellectual life, and technology, 400-1500 AD. It is an English translation of the 2013 update of the well-known German-language Enzyklopädie des Mittelalters, which was originally published by Primus Verlag / Wissenschaftliche Buchgesellschaft in 2008.

Transnational and interdisciplinary in approach, topics cover current art and architecture, medicine, and law, archaeology, ecclesiastical history, and languages and literature. They focus not on event history but on the comparative study of wider processes and problems.

Articles are thematically organised and supported by extensive bibliographies. The themes are:

There are alphabetical indices of authors and of contributors.