The Chronicle project provides members of UK Higher and Further educational establishments with access to digitised copies of news and current affairs material covering Northern Ireland and The Troubles, along with web-based tools allowing it to be searched, viewed and annotated. It contains material digitally transferred from the BBC NI news archive between 1963-1975.

Example: Gerry Adams was released by the Northern Ireland police on 4 May 2014 following interrogation of the disappearance and murder of Jean McConville. In the Chronicle you can view the interview by Graham Leach with her children which was screened in Scene Around Six on 17 January 1973: 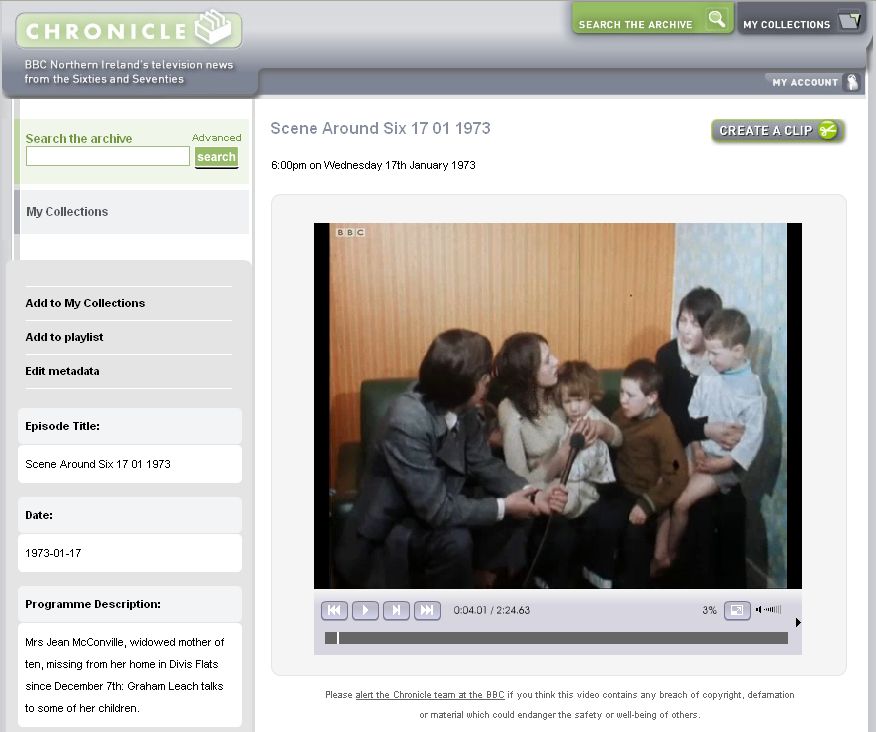 Any notable events or broadcasts missing from this period have either not yet been digitised or are absent from the original film collection, or may not have been recorded by BBC NI at the time. (Material not originally broadcast may occasionally be included.) Chronicle is delivered through a partnership between the JISC-funded Strategic Content Alliance, the British University Film and Video Council (BUFVC) and the BBC.

This resource is listed in OxLIP+. Access to Chronicle is available to Higher and Further educational establishments in the United Kingdom only; use of material is allowed for personal non-commercial educational purposes only (ie for the purpose of education and teaching, distance learning,
private study and/or research). Commercial use is strictly excluded. Further details of terms and conditions of use can be found here.

In the Where Are You from box select University of Oxford, login using SSO and choose New User. Enter your e-mail address and save.

[reposted from the British Library Sound and Vision blog.] 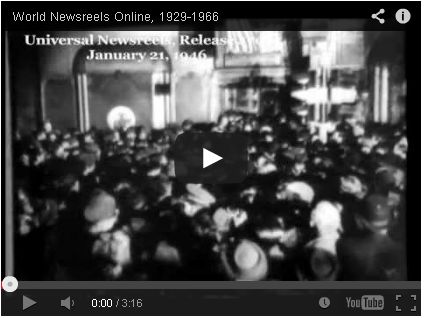 “This is a collection from Alexander Street Press of 500 hours (8,000 individual items) of newsreels (filmed news for cinema release) from Japan, France, the Netherlands and the USA, including wartime propaganda newsreels and a complete run of the important The March of Time series in its American edition (the British release version was slightly different). Most of the films have been fully transcribed, with transcriptions available in synchronisation presentation alongside the video. The contents include:

Nippon News—36 hours of Japanese newsreels from 1940-48 with English transcripts.

The March of Time—Full run of this American series, 115 hours of fully transcribed content, 1935-51.

United Newsreel—More than 35 hours of 1942-46 American weekly newsreel produced by the US Office of War Information, complete with transcripts.

Universal Newsreel—More than 200 hours of content with full transcripts from Universal Studios’s bi-weekly series that ran 1929-46.