War is
A grave affair of state;
It is a place
Of life and death,
A road
To survival and extinction,
A matter
To be pondered carefully.

Thus Sun Tzu in his Art of War (p. 6), the probably earliest philosophical treatise on a phenomenon of human interaction which more than any other has been credited with shaping and changing the course of history. From the Thermopylae (480 BC) and Marathon (490 BC) to Stamford Bridge and Hastings (1066); from Agincourt (1415) and the Siege of Orléans (1428-29) to Trafalgar (1805) and Waterloo (1815); from Saratoga (1777) and Gettysburg (1863) to the “Battle of Britain” (1940) and Stalingrad (1942-43) – the outcome of battles has determined the outcome of wars, and the outcome of wars has determined the fate of the nations who fought them.

No wonder then, that battles, war, warfare, and military history are topics to be found frequently in the new history books at the Bodleian every week – the nine volumes I’d like to present here are only some of the books on war in history that are newly arrived this month.

In his recent study War in Human Civilisation, Azar Gat collects some of the fundamental questions on war and its relationship to human civilisation:

Why do people engage in the deadly and destructive activity of fighting?…Have people always engaged in fighting or did they start to do so only with the advent of agriculture, the state, and civilization? How were these, and later, major developments in human history affected by war and, in turn, how did they affect war? (p. ix)

Three of the books on war new this month tackle such questions of its impact on or relationship to humans and their culture and cultural ideas.

Carl von Clausewitz (1780-1831), Prussian General and military theorist, and veteran of the Napoleonic wars, argues in his treatise Vom Kriege (On War) that the violence of war “arms itself with the inventions of Art and Science” – that is, with ideas (i.e. tactics and strategy), and with technology (i.e. weaponry). Two of the new studies argue that it is in fact not technology, but the human mind which is the most powerful weapon of all. Both studies take a macrohistoric approach to the topic – in Carnage and Culture Victor Davis Hanson discusses nine landmark battles from the victory of the Greeks against Xerxes at Salamis to the Tet offensive, arguing that it is positive Western culture and values which produce superior arms and soldiers. Similarly, John A. Lynn in Battle: A History of Combat and Culture looks at examples from several millennia and from around the globe to explore the way ideas, far more than bullets or bombs, shape the conduct of warfare. Human ideas and ideologies as the causes of wars, rather than as the weapons used in the waging of them, are discussed in Arnaud Blin in his study on War and Religion. Moving from the emergence of the great monotheistic faiths in the Mediterranean through the Middle Ages and the Renaissance into the modern era, he shows how religion not only fuelled a great number of conflicts but also defined the manner in which these wars were conducted and fought. 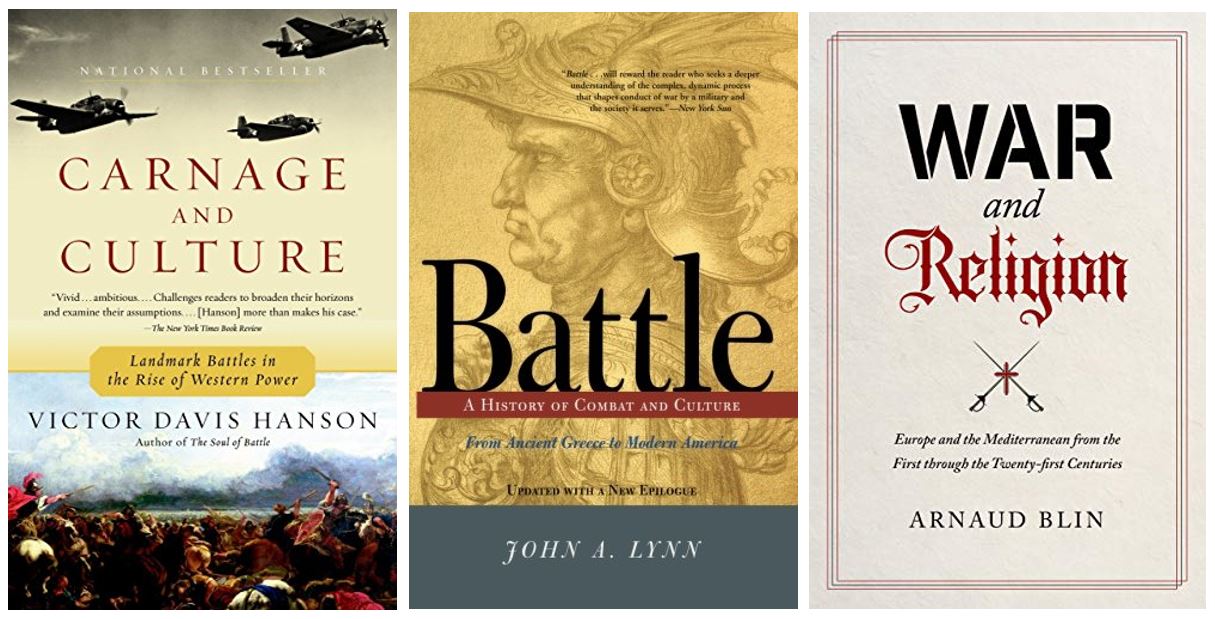 In yet another famous treatise on war, Dell’arte della guerra (1521), Niccolò Machiavelli discusses four mainstays of war and their relative importance:

The history of weaponry and weapons technology is of course closely linked to the history or war in general, and Machiavelli’s synecdochal use of “steel” comprises the entire phenomenon of the arms race, whether in the form of artillery, aircraft, firearms, missiles, or, in the 20th and 21st century, weapons of mass destruction. No less interesting are the humans who wield those weapons. Two of the new Bodleian books discuss these two closely linked aspects for the same series of medieval wars, the crusades. In Artillery in the Era of the Crusades Michael S. Fulton draws on both literary and archaeological evidence to examine the use of mechanical artillery, particularly the trebuchet, in the twelfth and thirteenth centuries in the Levant, while Steven Tibble’s The Crusader Armies draws on a wide range of Muslim as well as Western texts and archaeological evidence to discuss strategies of attack and defence, adaptation, evolution, and cultural diversity of the two opposing armies. 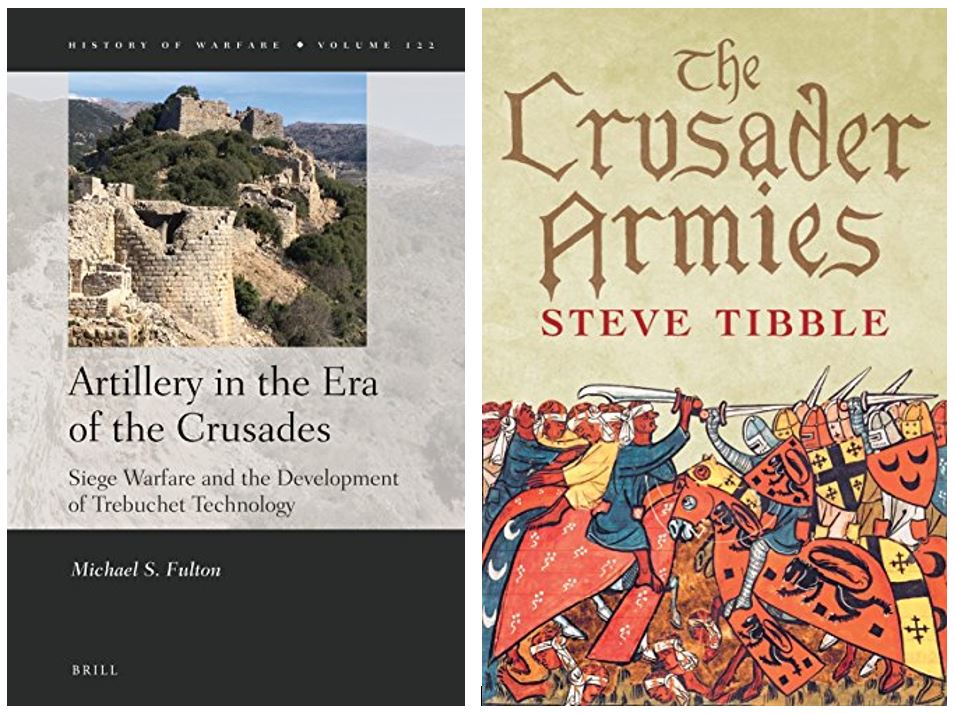 Throughout human historiography and literary production wars have been reported, described, narrated in fiction, romanticised, and sparked a plethora of both poetry and prose in an effort to understand it or process the experience – from the Chanson de Roland to Shakespeare’s Henry V, Tolstoy’s War and Peace, Wilfred Owen’s poetry, Remarque’s All Quiet on the Western Front and Heller’s Catch-22.

Attempting an overview of such memory and memorializing of one particular war, The Cambridge Companion to the Literature of the Crusades surveys the multilingual literary output on the theme of the crusades over the space of an entire millennium, from the earliest reports to the modern era, presenting the enduring legacy of the crusaders’ imagery from the chansons de geste to Walter Scott and from Charlemagne to Orlando Bloom. Memories of war with a rather shorter afterlife, and rather less romanticised and more credible, are collected by Frances Houghton in The Veterans’ Tale, accounts of how British veterans of the Second World War remembered, understood, and recounted their experiences of battle throughout the post-war period, and the contrasts with official, scholarly, and cultural representations of the Second World War in Britain. 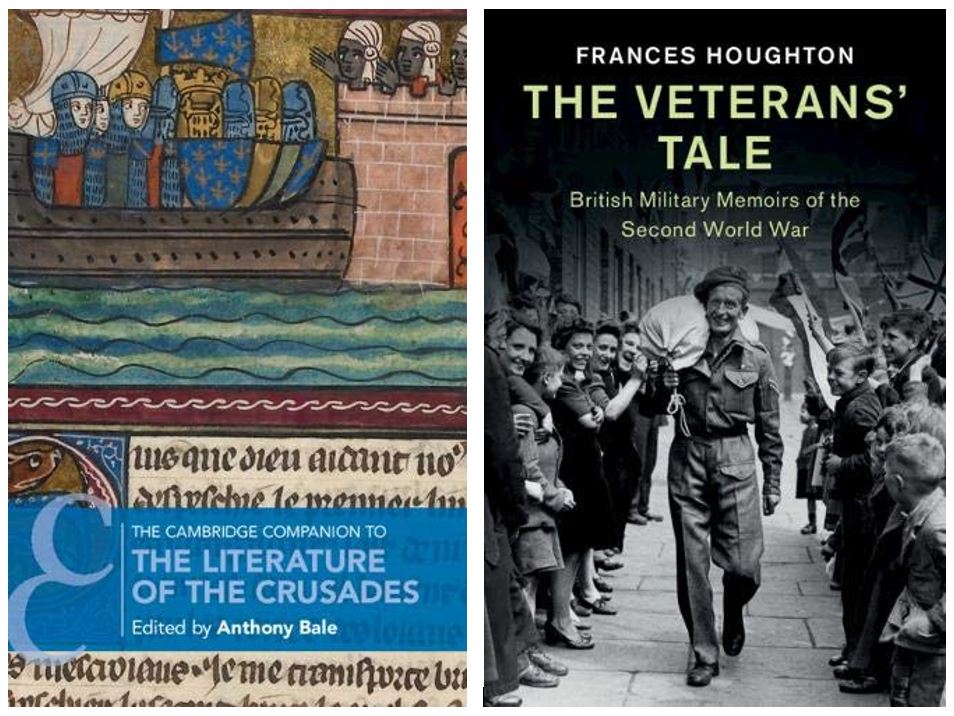 The End of the War

Clausewitz advocates a theory of two types of war, or more specifically, of two different ways to end a war: either by completely destroying the enemy, or by prescribing peace terms to him. The latter type has thankfully been rather more prevalent in recent times, and has resulted in peace treaties which are as famous and as history-defining as the wars they ended, and three of the new books look back at the conclusion of three major wars of the 20th century. A new addition to the Very Short Introduction series discusses The Treaty of Versailles on the centenary of the end of World War I, analysing the many subtle factors that influenced the treaty, and looking back at how the many conflicting objectives (such as a desire for peace after five years of disastrous war, demands for vengeance against Germany, the uncertain future of colonialism, or the emerging threat of Bolshevism) evolved throughout the remainder of the twentieth century – and also looks at its role in bringing about the conditions which ultimately led to World War II. The 70th anniversary of the conclusion of WWII, the 1945 Potsdam Agreement, is occasion for Das Potsdamer Abkommen 1945-2015, a collection of essays which discusses the conflicting objectives of the three main global powers, the Soviet Union, the USA and Great Britain, in the aftermath of the victory over Nazi Germany. Already at the time of the Potsdam Agreement, however, the battle lines were being drawn for the Cold War. The ending of this longest (if not most violent or bloodiest) war of the 20th century is discussed by Michael Cotey Morgan in The Final Act: the Helsinki Accords, if they did not actually end the Cold War, certainly served as a blueprint to do so. This account of the diplomatic saga that produced this historic agreement draws on research in eight countries and multiple languages, and argues that despite being initiated by the Soviets, the final agreement embraced liberal democratic ideals more than communist ones, and instead of restoring the legitimacy of the Soviet bloc, established principles that undermined it.

You can find more books on the subject on the History at the Bodleian LibraryThing shelf, tagged with “war”, “warfare”, “military history”, and “treaties”.