Now we know what curved path the frightful comets have;

No longer do we marvel at the appearances of a bearded star.

Edmund Halley, “Ode on This Splendid Ornament of Our Time and Our Nation, the Mathematico-Physical Treatise by the Eminent Isaac Newton.”

The “Scientific Revolution” is understood to consist of a series of events during the early modern period that marked the emergence of modern sciences through revolutionary developments in such areas as mathematics, physics, astronomy, biology, human anatomy and chemistry. Its starting point is usually taken to coincide with the publication of Nicolaus Copernicus’s De revolutionibus orbium coelestium in 1543, while its end point is the publication of another revolutionary study, Isaac Newton’s 1687 Principia, the Mathematical Principles of Natural Philosophy. It would be quite easy to imagine the Scientific Revolution as the great divide between the occult and the scientific – with magic, alchemy, astrology, and  any other “practical arts held to involve agencies of a secret or mysterious nature” (as the OED defines the term “occult sciences”) on the one side, and modern sciences like chemistry, physics, biology, medicine, and astronomy on the other. But the divide, if it even exists, is nowhere near as neat.

For one, esotericism, occultism and mysticism are very much alive and flourishing, and making headlines even in the 21st century: last year US Representative Alexandria Ocasio-Cortez’ birth horoscope, drawn up by self-described psychic and astrologer Arthur Lipp-Bonewits, made “Astrology Twitter” go wild, while a coven of Brooklyn witches publicly hexed then-Supreme Court candidate Brett Kavanaugh. Alternative medicines from acupuncture to homeopathy, and from Ayurveda and therapeutic magnets to faith healing are also experiencing a considerable revival – “healing crystals”, for example, endorsed and commercialised by celebrities such as Gwyneth Paltrow, Adele and Kim Kardashian, have  become a (often shady) billion-dollar industry.

For another, evidence keeps mounting that the so-called occult sciences, especially alchemy, lie at the heart of much of the emerging modern science, and that even canonical figures of the Scientific Revolution pursued chrysopoeia seriously. Newton is a case in point – the Indiana University website Chymistry of Isaac Newton provides online access of his impressive collection of alchemical manuscripts, and even the The Cambridge Companion to Newton concedes that “[a]lthough his long engagement with alchemy did not lead Newton to his fundamental discovery of universal gravitation, it had highly significant impacts on other aspects of his science, particularly in the realms of optics and in the study of the Earth’s internal processes.” (p. 455) The “Father of Modern Chemistry”, Robert Boyle, is a similar case – surviving papers show clearly that his work on transmutational processes was integrated into his chemical research, and “document unambiguously Boyle’s lifelong chrysopoetic activities, his search for the philosophers’ stone, and his attempts to contact adepti.” (Principe, 2011, p. 308). This relationship of science with the occult does not even start and end with the Scientific Revolution – some of the outstanding figures of the very early history of medicine in Islam in the 9th and 10th century have an equal importance as alchemists, and the New Cambridge History of Islam, in its chapter on “Occult Sciences and Medicine”, labels the Islamic tradition of alchemy as “most important for the history of science”. On the other side, Modern Alchemy: Occultism and the Emergence of Atomic Theory argues convincingly that as modern nuclear physics was born, the trajectories of science and occultism briefly converged: in their joint 1902 papers on “The Radioactivity of Thorium Compounds”, Ernest Rutherford and Frederick Soddy demonstrated how radioactive elements disintegrate, releasing radioactivity and transforming into other elements in the process, a process now known widely under the same name as the supposed change of base metals into gold in alchemy – “transmutation”.

In the spirit of such relationships, this selection of History eBooks newly purchased by the Bodleian on the wider topic of “Science and the Occult” includes studies from classic occult subjects such as demononolgy and witchcraft, discussions of the occult sciences and their relationship with modern science, and books on the Scientific Revolution itself. 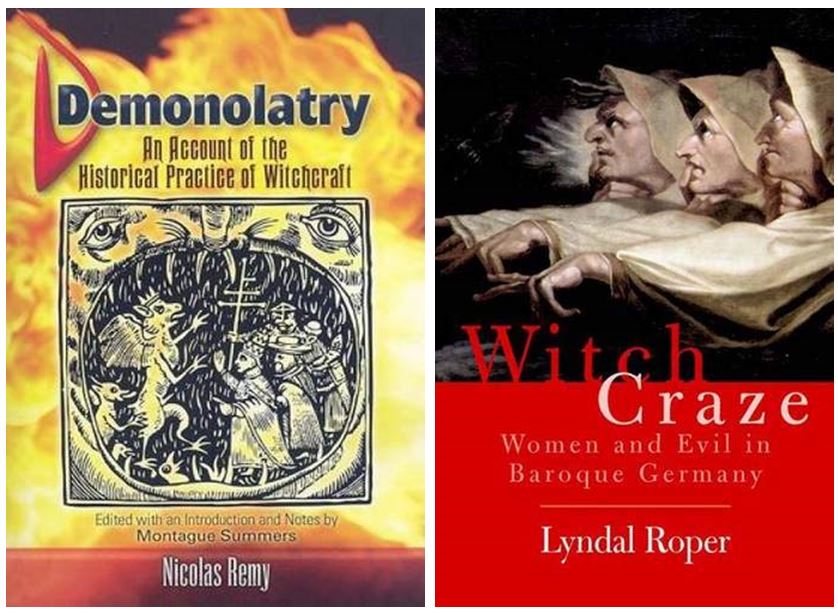 We are starting off with one of the “classics” of the history of witchcraft, Demonolatry: An Account of the Historical Practice of Witchcraft, a new 2008 edition of Ashwin’s English translation of Nicolas Remy’s 1595 Daemonolatreiae, an amplification and update of the 1486 Malleus Maleficarum, and the leading witchcraft handbook of its day. In addition to defining the black arts and their practitioners, making it possible to “recognize” witches, it offers civil and religious authorities directives for persecution of the accused and punishment of the condemned – and if you need any more incentive to read, Remy’s collection of notes, opinions, and court records features lurid details of satanic pacts and sexual perversity as well as the particulars of numerous trials. Lynda Roper’s Witch Craze (2004) then illustrates how handbooks like these were put into practice, offering a gripping account of the pursuit, interrogation, torture, and burning of witches during the 16th and 17th centuries in Southern Germany. Drawing on hundreds of original trial transcripts, Roper examines the lives, families, and tribulations of the condemned witches, analysing the psychology of witch-hunting, and discussing how the depiction of witches in art and literature has influenced the characterization of elderly women in our own culture.

Religion, the Occult, and Science 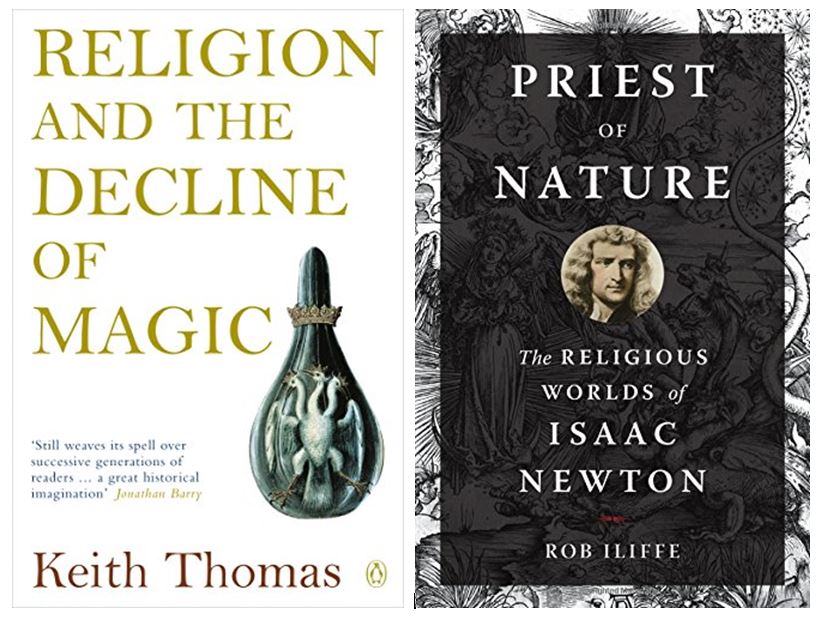 Another classic study of the subject, this one concentrating on the 16th and 17th centuries in England, is Keith Thomas’ Religion and the Decline of Magic, now also available as an eBook through SOLO. Thomas analyses the connections between magic and popular religion at a time the Protestant Reformation worked to take the magic out of religion, and science and rationalism also began to challenge the older systems of beliefs held by people on every level of English society. Staying with the topic of religion, but moving a bit further into the realm of science as well as into the 18th century is Rob Iliffe’s Priest of Nature, which focuses on an often-neglected side of Isaac Newton, his private religious convictions that set him at odds with established law and Anglican doctrine. Iliffe’s discussion of Newton’s long-suppressed writings on his theological positions sheds light on the relationship between faith and science at a formative moment in history and thought, and the theological discussions that dominated Newton’s age, giving an insightful picture of the spiritual views of a man who fundamentally changed how we look at the universe. 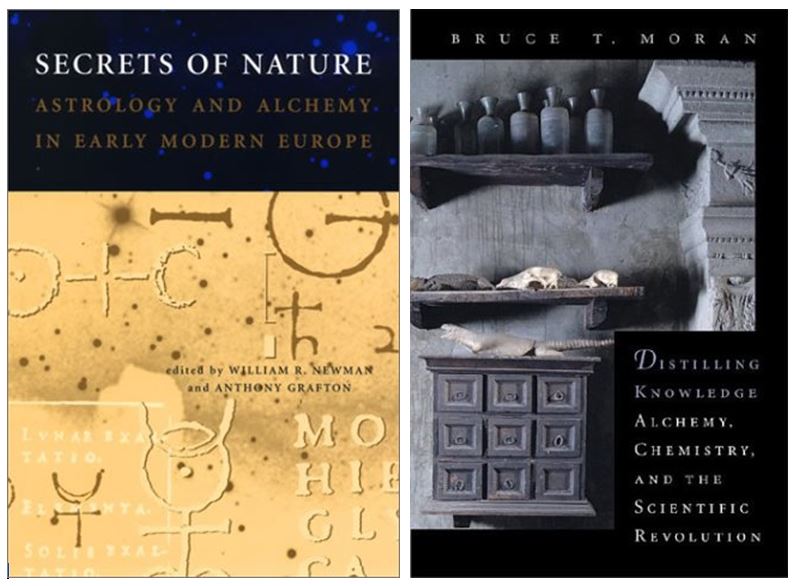 Two of the books newly available as eBooks discuss some of the classic occult sciences – Secrets of Nature (2001) offers eight essays on various aspects of the disciplines of alchemy and astrology in early modern Europe, from the work of Renaissance astrologer Girolamo Cardano to the astrological thinking of Johannes Kepler and Galileo Galilei, the history of the Rosicrucians and the influence of John Dee, the work of medical alchemist Simon Forman, and the existing historiography of alchemy. Connecting the occult science of alchemy with the modern scientific area of chemistry, Bruce T. Moran’s 2005 Distilling Knowledge looks past contemporary assumptions and prejudices to determine what alchemists were actually doing in the context of early modern science between 1400 and 1700. His examination of the ways alchemy and chemistry were studied and practiced show a shared territory between their two disciplines in the way the respective practitioners thought about the natural world, and even exchanged ideas and methods – to a point where he argues for accepting alchemy, on its own terms, as a demonstrative science. 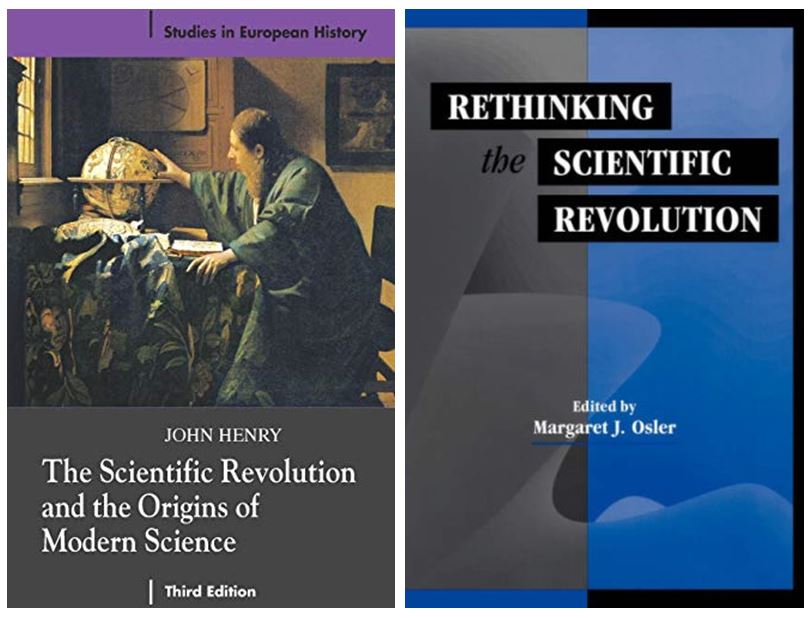 You can find all books newly available as eBooks on our LibraryThing shelf, or check out the tag pages for “witchcraft“, “Scientific Revolution” or “alchemy” for more books on this topic! 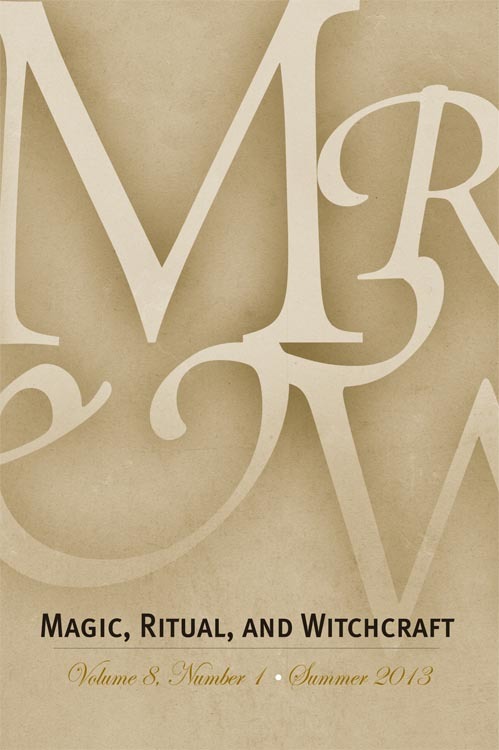 Published by University of Pennsylvania Press, this scholarly journal “draws from a broad spectrum of perspectives, methods, and disciplines, offering the widest possible geographical scope and chronological range, from prehistory to the modern era and from the Old World to the New. In addition to original research, the journal features book reviews, editorials, and lists of newly published work.”

A great journal for those researching witchcraft or first-year historians who have signed up for next term’s Optional Subject Witch-craft and witch-hunting in early modern Europe.

Magic and Witchcraft Historicized, Localized, and Ethnicized: A Response to Stephen Mitchell’s Witchcraft and Magic in the Nordic Middle Ages
Thomas A. Dubois

Together with the VHL, we are running a trial for selected collections in Archives Unbound.

Archives Unbound offers access to topically-focussed archives of digitised historical documents. The following selections are being trialled:
1. East Germany from Stalinization to the New Economic Policy, 1950-1963
2. The Economy and War in the Third Reich, 1933-1944
3. Witchcraft in Europe and America
4. Federal Response to Radicalism in the 1960s
5. Federal Surveillance of African Americans, 1920-1984
6. Overland Journeys: Travels in the West, 1800-1880

We have previously looked at Archives Unbound and often found the quality of the scans disappointing. If you have any views on searching, content, etc. then please send your feedback for 1-3 to Isabel Holowaty and for 3-6 to Jane Rawson.

The trial ends 25 February 2011. You will need a password. In OxLIP+, search for Archives Unbound as a title. Then click on the Weblearn link which is provided in the Legend box on the right-hand side. Do let us know if you have problems with access.

We now have trial access to “Witchcraft in Europe and America”, a digital library of texts on witchcraft between the 15th century and c.1930.

The majority of the material concerns the 16th to 18th centuries. In addition to these classic texts, the collection includes anti-persecution writings, works by penologists, legal and church documents, exposés of persecutions, and philosophical writings and transcripts of trials and exorcisms. Included are many rare and fragile manuscripts containing eyewitness accounts and court records of the trials of witches, including harrowing original manuscript depositions taken from the victims in the torture chamber. The majority of texts are in Latin, English and German, although there are also selected items in French, Italian, Portuguese, Danish, Dutch and Spanish.

Access is via OxLIP+. Please send feedback to Isabel Holowaty by 11th June. We have already made a note of some poor quality scans. There are currently no funds for this resource, but we would like to find out whether it’s worth adding to the History desiderata list.