Who? Next week’s lecture will be given by Dr Chris Low, who will be speaking about ‘Historical and anthropological reflections on collapse and seizures among KhoeSan of southern Africa’.

What? ‘Collapse and seizures are a relatively well known component of the San healing dance. Whilst the dance is a relatively well studied phenomenon anthropologists of the dance have overwhelmingly ignored the wider context of these experiences. During this talk I will pull together seemingly diverse contexts of fits, collapse and seizures as I argue that what happens in the dance can be better understood if it is located within wider KhoeSan ontology and understanding of illness, healing, spirits and potency. My findings range from colonial records to recent anthropology and are based upon nearly twenty years of working on health and healing among the KhoeSan.’ 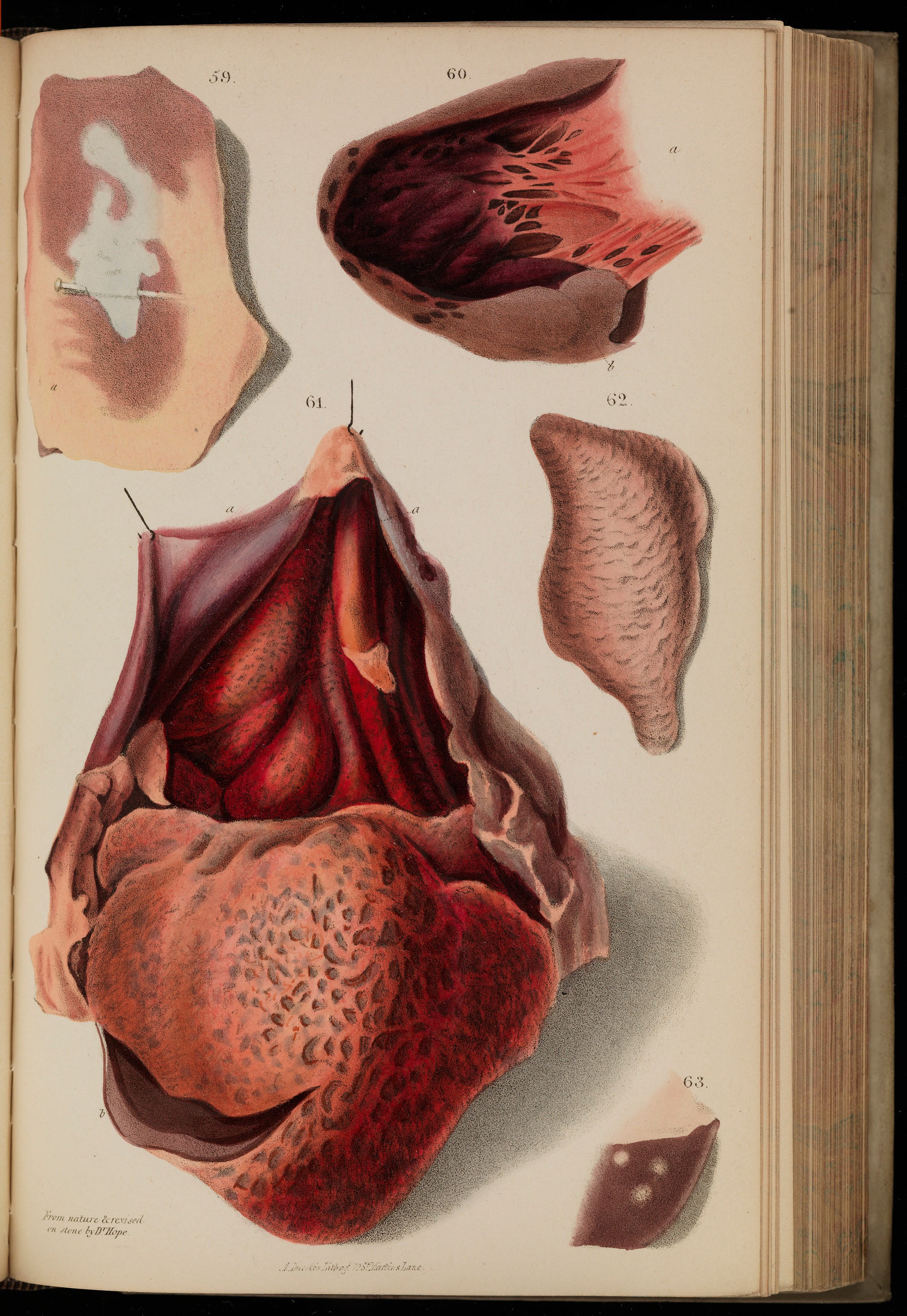 Who? Next week’s lecture will be given by Georgina Ferry, who will be speaking about ‘No lone heroes: is there a place for life stories in the history of science?’.

What? ‘Biography has been regarded with suspicion by historians, as neglecting the currents of technological change and historical contingency in favour of a focus on the individual. An alternative view is that the life history of a scientist can be told in such a way as to illustrate these larger themes, while providing a compelling narrative that offers the opportunity to reach audiences beyond the academy. I will illustrate this argument with reference to the lives of 20th century molecular biologists and Nobel prizewinners, Dorothy Crowfoot Hodgkin and Max Perutz.’ 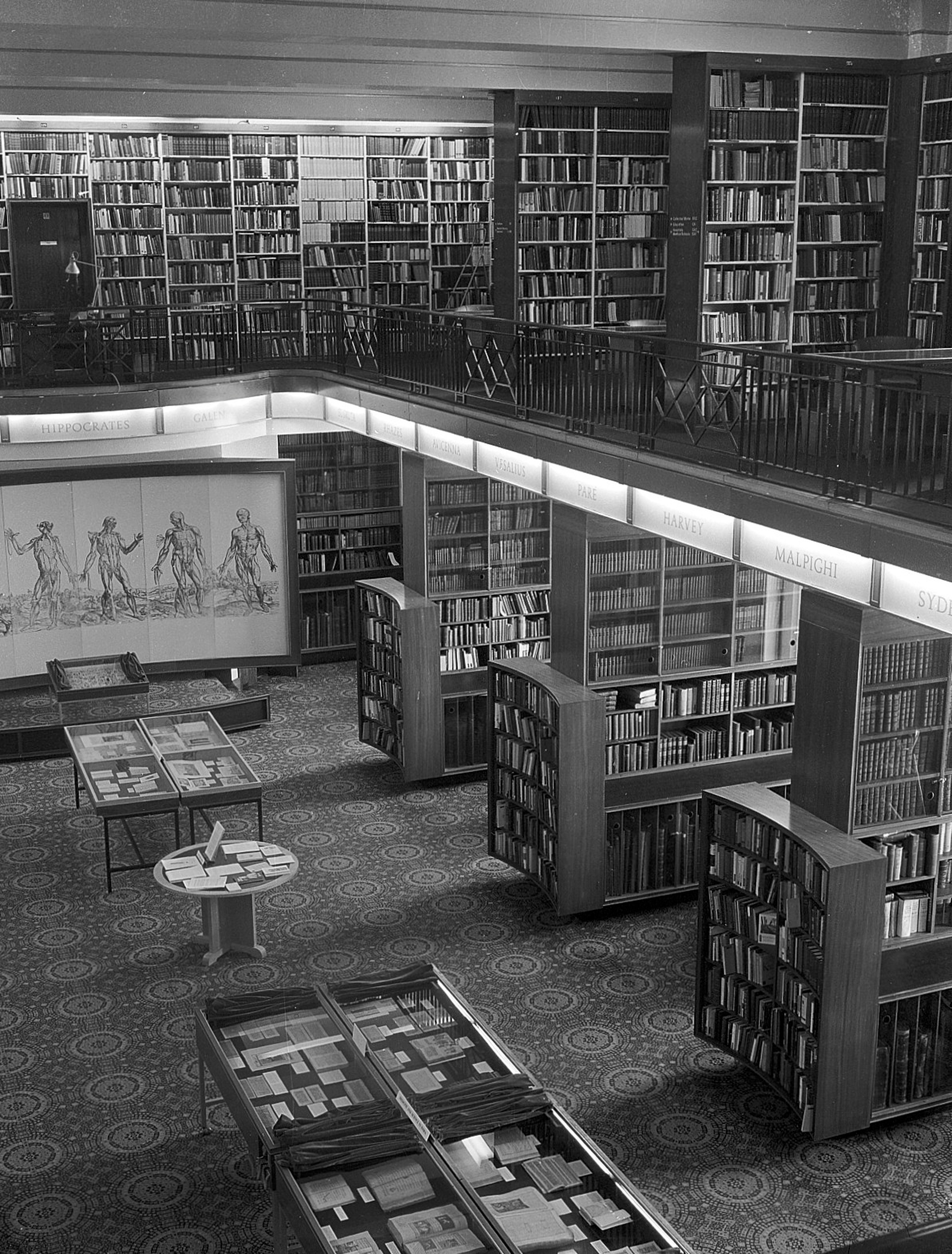 The latest Oxford Dictionary of National Biography update, released yesterday, includes the lives of 20 leading figures in the nursing profession in the twentieth century, and coincides with 2020 being designated by the World Health Organization as the Year of the Nurse and Midwife.

The newly-added entries have been contributed by nurses as well as historians, led by the RCN History of Nursing Forum in collaboration with the UK Association for the History of Nursing, and curated by Teresa Doherty of the Royal College of Nursing Library and Archive.

The lives range from Anne Campbell Gibson (1849-1926), matron of the Birmingham workhouse infirmary, which came to be regarded as the best-managed poor law infirmary in the country, to Annie Therese Altschul (1919-2001), who fled Austria in 1939 and settled in Britain, where she became an authority in psychiatric nursing.

The update includes the lives of the founding generation of the Royal College of Nursing (1916) and the introduction of state registration of nursing (1919), as well as  those who went on to work under the NHS, developing teaching and research programmes for nurses.

Who? Next week’s lecture will be given by Dr Taha Yasin Arslan, who will be speaking about ‘Astronomical instrumentation as a medium for the transmission of knowledge in the Islamic world’.

What? ‘This talk examines the role of astronomical instrumentation in the transmission of mathematical knowledge within the Islamic world between the ninth and nineteenth centuries based on two main sources: extant instruments and texts. Astronomical instruments such as astrolabes and celestial globes are important information sources for they provide details on the level of knowledge, arts, and craftmanship of its time as well as traces of long-standing instrument making traditions. The engravings, parts, and types of instruments allow us to make connections between different regions and periods. Texts on instruments are also, if not more, important on mapping the transmission of knowledge. Dissemination of certain treatises on making or using instruments made the know-how widespread in the Islamic world. These texts carry ownership records, margin notes, copying information, and other relevant data that help us trace the tradition backwards. Although mapping the transmission of scientific knowledge has its challenges, detailed examination of texts and instruments together can provide a clear route. Moreover, these studies could prove important for understanding the attitude of the Islamic world towards science between the ninth and nineteenth centuries.’

We’ve had several new arrivals already this year, so why not grab a coffee in your KeepCup, escape from the cold and head on over to the History of Medicine Library to check out some new titles? 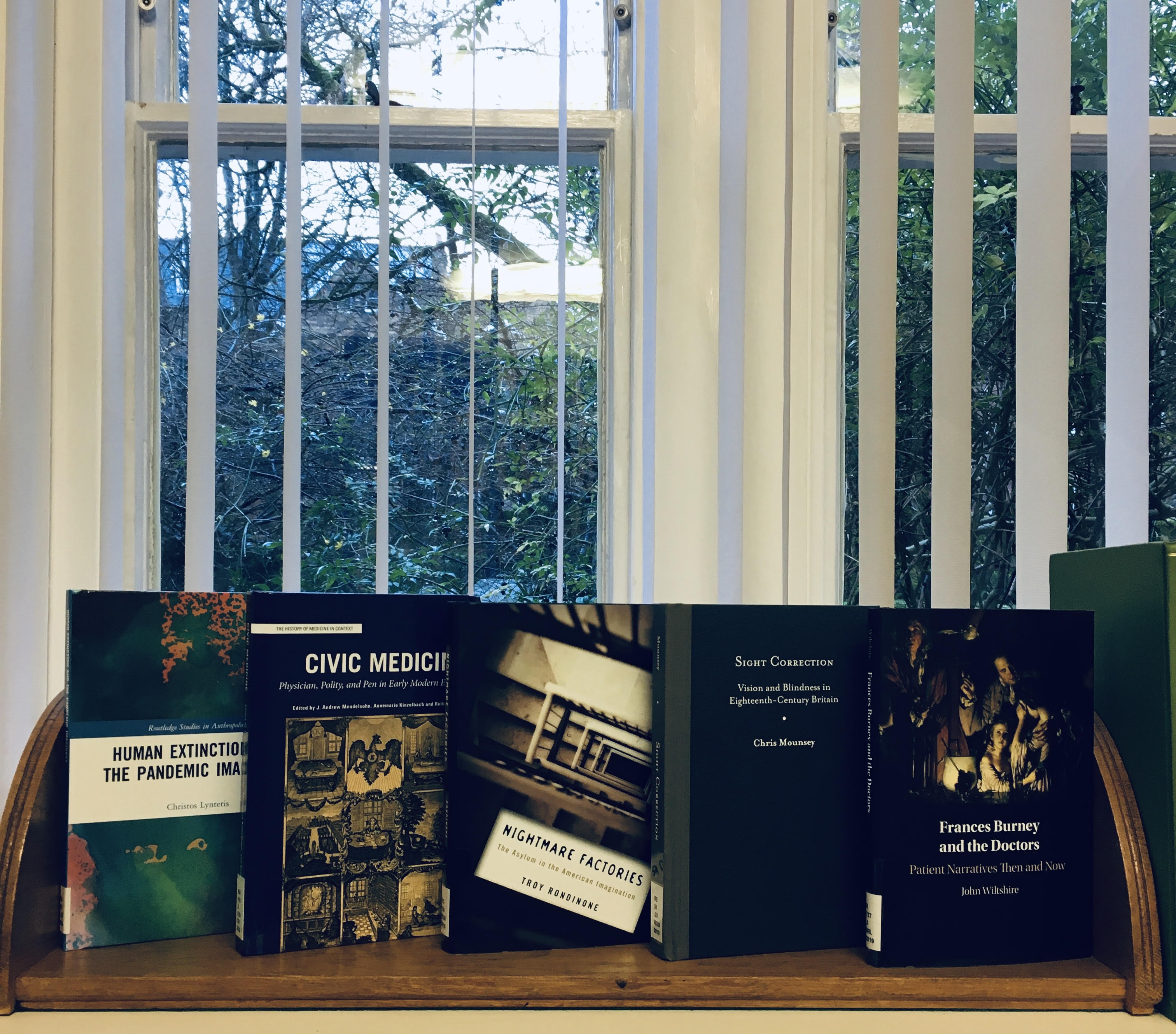 Human Extinction and the Pandemic Imaginary by Christos Lynteris

‘This book develops an examination and critique of human extinction as a result of the ‘next pandemic’ and turns attention towards the role of pandemic catastrophe in the renegotiation of what it means to be human. Nested in debates in anthropology, philosophy, social theory and global health, the book argues that fear of and fascination with the ‘next pandemic’ stem not so much from an anticipation of a biological extinction of the human species, as from an expectation of the loss of mastery over human/non-human relations. Christos Lynteris employs the notion of the ‘pandemic imaginary’ in order to understand the way in which pandemic-borne human extinction refashions our understanding of humanity and its place in the world. The book challenges us to think how cosmological, aesthetic, ontological and political aspects of pandemic catastrophe are intertwined. The chapters examine the vital entanglement of epidemiological studies, popular culture, modes of scientific visualisation, and pandemic preparedness campaigns. This volume will be relevant for scholars and advanced students of anthropology as well as global health, and for many others interested in catastrophe, the ‘end of the world’ and the (post)apocalyptic.’

Nightmare Factories: The Asylum in the American Imagination by Troy Rondinone

‘How the insane asylum came to exert such a powerful hold on the American imagination.

Madhouse, funny farm, psychiatric hospital, loony bin, nuthouse, mental institution: no matter what you call it, the asylum has a powerful hold on the American imagination. Stark and foreboding, they symbolize mistreatment, fear, and imprisonment, standing as castles of despair and tyranny across the countryside. In the “asylum” of American fiction and film, treatments are torture, attendants are thugs, and psychiatrists are despots.

In Nightmare Factories, Troy Rondinone offers the first history of mental hospitals in American popular culture. Beginning with Edgar Allan Poe’s 1845 short story “The System of Dr. Tarr and Prof. Fether,” Rondinone surveys how American novelists, poets, memoirists, reporters, and filmmakers have portrayed the asylum and how those representations reflect larger social trends in the United States. Asylums, he argues, darkly reflect cultural anxieties and the shortcomings of democracy, as well as the ongoing mistreatment of people suffering from mental illness.’

Vision and Blindness in Eighteenth-Century Britain by Chris Mounsey

‘The debut publication in a new series devoted to the body as an object of historical study,  Sight Correction provides an expansive analysis of blindness in eighteenth-century Britain, developing a new methodology for conceptualizing sight impairment. Beginning with a reconsideration of the place of sight correction as both idea and reality in eighteenth-century philosophical debates, Chris Mounsey traces the development of eye surgery by pioneers such as William Read, Mary Cater, and John Taylor, who developed a new idea of medical specialism that has shaped contemporary practices. He then turns to accounts by the visually impaired themselves, exploring how Thomas Gills, John Maxwell, and Priscilla Pointon deployed literature strategically as a necessary response to the inadequacies of Poor Laws to support blind people. Situating blindness philosophically, medically, and economically in the eighteenth century, Sight Correction shows how the lives of both the blind and those who sought to treat them redefined blindness in ways that continue to inform our understanding today.’

For a full list of this year’s new books, please check out our LibraryThing page. If you would like to consult any of these titles and more, then feel free to visit us at 45 Banbury Road! We are open most weekday afternoons from 2.15pm until 5pm (4.30pm on Wednesdays), but do check our weekly blog posts for up-to-date opening hours. If you haven’t visited the History of Medicine Library before, then please email us at historyofmedicine@bodleian.ox.ac.uk in to organise your first visit. See you soon! 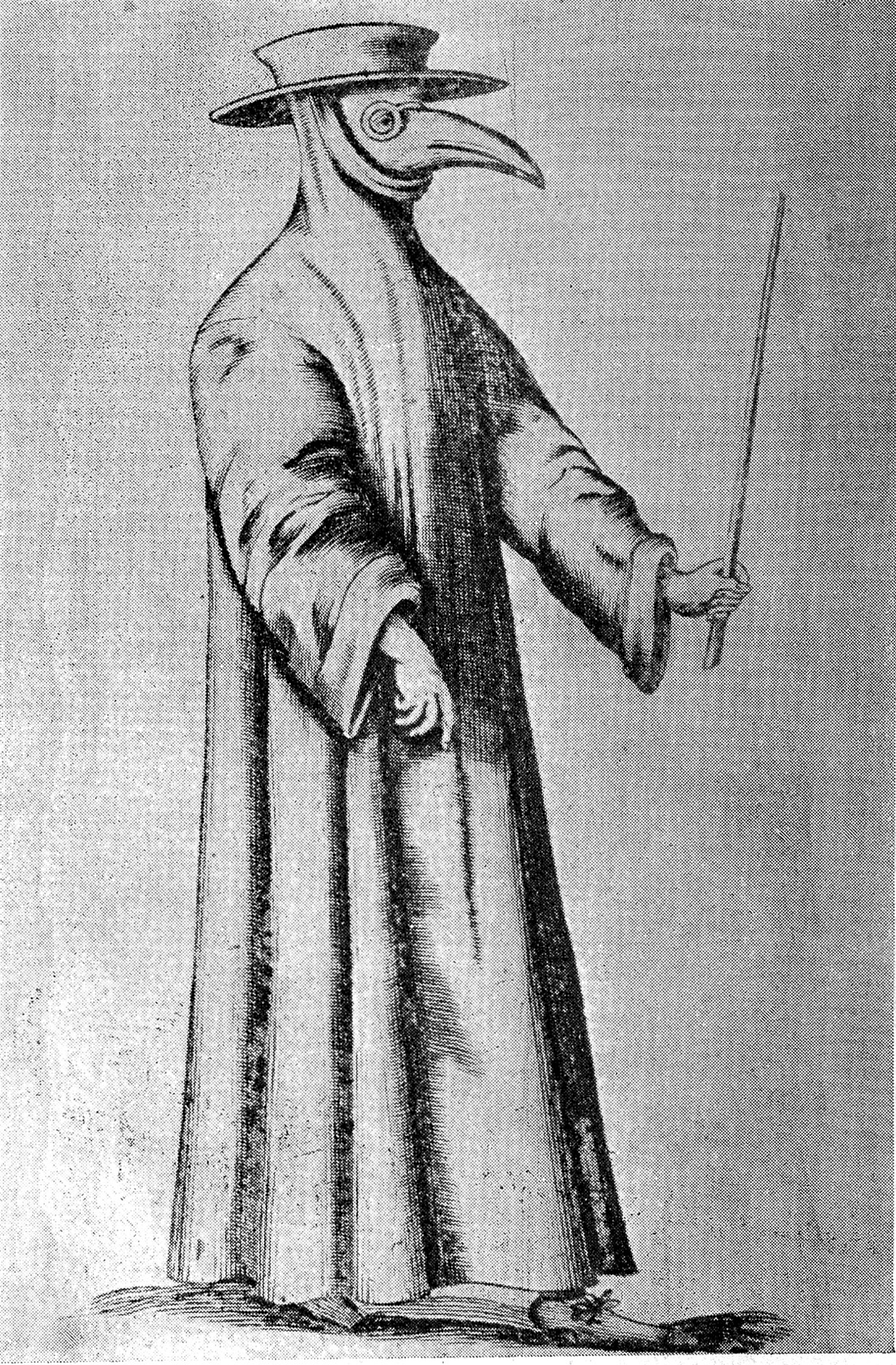 Who? Next week’s lecture will be given by Dr Catherine Kelly, who will be speaking about ‘Medicine, Law, and the Lash: Militarized Medicine and Corporal Punishment in the Australian Colonies 1788-1850′.

What? ‘The service of medical practitioners in the early Australian colonies was inextricably bound up with a heavily militarized culture. This paper explores the relationships between those medical practitioners, legal punishment, and the British Empire in the first half of the nineteenth century. The service of medical practitioners in the Australian colonies, coming as it did so close on the heels of two generations of war, gives us an important insight into the effects of the Napoleonic wars both upon the practice of medicine in the service of the British State, and also the State’s attitude to the use of medical expertise. In the military spaces of transport and colony, the medical officer became an important lynchpin in the discipline and control exercised over convict bodies. Military medical expertise was useful to the State in understanding the best ways to discomfort and hurt convicts, without quite killing them. This expertise was further cultivated by the State in the ongoing design of the medical role in the colonies that came to hark forward to the prison officer of the later nineteenth century whose position, balanced precariously between punishment and care, has been of such interest to penologists and medical historians.’