Who? The final lecture of this term will be given by Dr Andreas Winkler, who will be speaking about ‘Stars, Time, and Birth: The Temple and Astral Science in Graeco-Roman Egypt’.

What? ‘Although astronomers are attested already in the earliest written sources in Egypt from the 3rd millennium BC, the preserved sources suggest that there was an increased focus on astral knowledge in the 1st millennium BC, and particularly from ca 500 BC onwards. A similar process can be observed in Mesopotamia, particularly after the introduction of the zodiac, which also made its appearance relatively early on in Egypt. In my talk, I will discuss the introduction of the zodiac in Egypt and its impact on the culture country in a broader sense, as well as the role of the Egyptian priesthood in transferring this knowledge further afield..’

Who? Next week’s lecture will be given by Dr Chris Low, who will be speaking about ‘Historical and anthropological reflections on collapse and seizures among KhoeSan of southern Africa’.

What? ‘Collapse and seizures are a relatively well known component of the San healing dance. Whilst the dance is a relatively well studied phenomenon anthropologists of the dance have overwhelmingly ignored the wider context of these experiences. During this talk I will pull together seemingly diverse contexts of fits, collapse and seizures as I argue that what happens in the dance can be better understood if it is located within wider KhoeSan ontology and understanding of illness, healing, spirits and potency. My findings range from colonial records to recent anthropology and are based upon nearly twenty years of working on health and healing among the KhoeSan.’

Who? Next week’s lecture will be given by Georgina Ferry, who will be speaking about ‘No lone heroes: is there a place for life stories in the history of science?’.

What? ‘Biography has been regarded with suspicion by historians, as neglecting the currents of technological change and historical contingency in favour of a focus on the individual. An alternative view is that the life history of a scientist can be told in such a way as to illustrate these larger themes, while providing a compelling narrative that offers the opportunity to reach audiences beyond the academy. I will illustrate this argument with reference to the lives of 20th century molecular biologists and Nobel prizewinners, Dorothy Crowfoot Hodgkin and Max Perutz.’

Who? Next week’s lecture will be given by Dr Taha Yasin Arslan, who will be speaking about ‘Astronomical instrumentation as a medium for the transmission of knowledge in the Islamic world’.

What? ‘This talk examines the role of astronomical instrumentation in the transmission of mathematical knowledge within the Islamic world between the ninth and nineteenth centuries based on two main sources: extant instruments and texts. Astronomical instruments such as astrolabes and celestial globes are important information sources for they provide details on the level of knowledge, arts, and craftmanship of its time as well as traces of long-standing instrument making traditions. The engravings, parts, and types of instruments allow us to make connections between different regions and periods. Texts on instruments are also, if not more, important on mapping the transmission of knowledge. Dissemination of certain treatises on making or using instruments made the know-how widespread in the Islamic world. These texts carry ownership records, margin notes, copying information, and other relevant data that help us trace the tradition backwards. Although mapping the transmission of scientific knowledge has its challenges, detailed examination of texts and instruments together can provide a clear route. Moreover, these studies could prove important for understanding the attitude of the Islamic world towards science between the ninth and nineteenth centuries.’

Who? Next week’s lecture will be given by Dr Catherine Kelly, who will be speaking about ‘Medicine, Law, and the Lash: Militarized Medicine and Corporal Punishment in the Australian Colonies 1788-1850′.

What? ‘The service of medical practitioners in the early Australian colonies was inextricably bound up with a heavily militarized culture. This paper explores the relationships between those medical practitioners, legal punishment, and the British Empire in the first half of the nineteenth century. The service of medical practitioners in the Australian colonies, coming as it did so close on the heels of two generations of war, gives us an important insight into the effects of the Napoleonic wars both upon the practice of medicine in the service of the British State, and also the State’s attitude to the use of medical expertise. In the military spaces of transport and colony, the medical officer became an important lynchpin in the discipline and control exercised over convict bodies. Military medical expertise was useful to the State in understanding the best ways to discomfort and hurt convicts, without quite killing them. This expertise was further cultivated by the State in the ongoing design of the medical role in the colonies that came to hark forward to the prison officer of the later nineteenth century whose position, balanced precariously between punishment and care, has been of such interest to penologists and medical historians.’

Who? Next week’s lecture will be given by Professor Marilyn Nicoud, who will be speaking about ‘Some aspects of patient-doctor relationships in the Middle Ages: Consilia and Regimina sanitatis, a kind of individualised medicine’.

What? ‘Historical and sociological studies have often examined patient-doctor relationships in terms of power. If today medical power is being called into question, because of legalisation of patient-practitioner relationships and because of the weight of patient associations, a lot of studies have shown that with the arrival of clinical medicine and the medicalisation of hospitals, medical discourse has imposed its power and reduced the free will of patients. This intervention proposes to examine the medieval situation and, in particular, the development of what could be interpreted as a kind of personalised medicine. It is part of a collaborative project aimed at producing a book about these relationships, studied from the Middle Ages to the beginning of the 20th century. With the progressive development of a doctrine and efforts to regulate medical practice, special texts were produced from the 13th century onwards: the writing of therapeutic consilia and regimina sanitatis has resulted in an impressive number of texts, distributed by a large number of manuscripts and editions. Often written by the medical ‘elite’ for specific people, these texts propose a kind of personalised medicine, mediated by writing, that also corresponds to particular forms of relationships, which could be described as negotiated or even, in a way, contractualised.’

The Humanities Research Fair will now be taking place on Monday 27th January 2020!

At the Fair you can learn about resources you may not yet have yet considered and meet the curators of collections who can guide you towards relevant material or useful finding tools. Over 40 stalls will cover many areas: 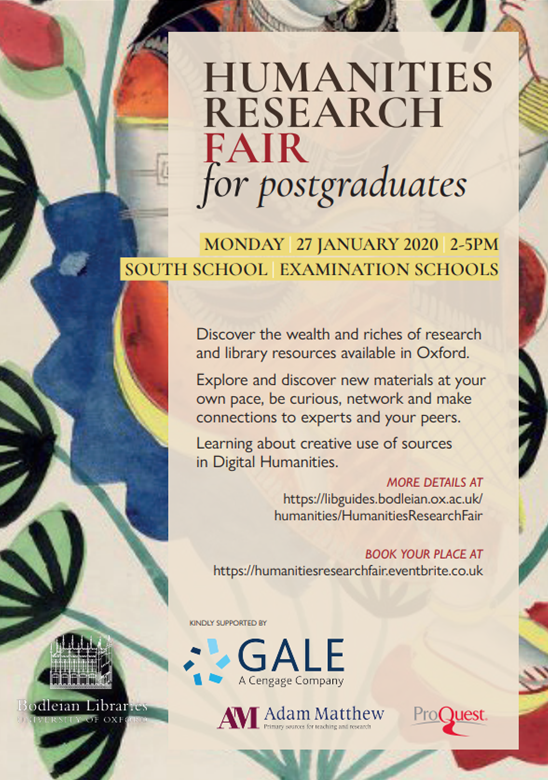 Who? Major General Professor Alan Hawley CBE will be speaking about ‘A Medical Commander In Rwanda 1994: Stabling The Four Horsemen Of The Apocalypse’.

He ‘studied medicine at the University of Birmingham and then joined the British Army as a doctor. His military experience included the command of the Parachute Medical Regiment and operational experience in Northern Ireland, Bosnia, Kosovo, Rwanda, Sierra Leone, Afghanistan and Iraq. He was the medical commander in most of these deployments which made him the most operationally experienced British Army Medical Commander since the Second World War. He completed 34 years of service and left in 2009 to take up a Professorial appointment in Disaster Studies. He is currently settling into academic life again as a theology undergraduate at Wycliffe Hall, University of Oxford.’

What? ‘In 1994 the world witnessed one of the most devastating episodes of genocide ever perpetrated. The United Kingdom deployed a force of 650 to be part of the United Nations response to the disaster. This lecture will feature the experience of Alan Hawley as the medical commander of the British contingent. He will offer a personal view of the politics, realities and ethics of the situation in Rwanda. He will cover the change in the situation from murder and lawlessness to a more stable state of equilibrium and touch on the human cost of the deployment.’

For more information and to register, please visit https://www.gtc.ox.ac.uk/eventbrite-event/mcgovern-lecture-on-the-history-of-medicine/

Who? This term’s first lecture will be given by Dr Michael Finn, who will be speaking about ‘Self-help and psychology’.

What? ‘Self-help literature proliferates today, on bookshelves and online, providing guidance and knowledge for people looking to improve their lives, careers and mental health. The origins of the genre have been traced as far back as antiquity, but it was in the 19th century, in the works of authors such as George Combe and Samuel Smiles, that the publication of self-help works gained mass popular appeal. This growth in self-help literature, amongst other things, accompanied the development of scientific theories of mind, and the rise of psychology as a distinct discipline in the Western World.

In this talk, I wish to look at the historical relationship between psychology and self-help from the 19th century onwards, asking to what extent theories of mind have underpinned self-help advice, how these have changed over time, and what lessons historians can take from this story.’

Who? This term’s final lecture will be given by Dr Bénédicte Prot (Oxford and Swiss National Science Foundation), who will be speaking about ‘Putting medicine and literature in dialogue: the case of the French doctor Jean-Louis Alibert (1768-1837)’.

What? ‘Jean-Louis Alibert (1768-1837) remains a famous French physician, clinician, professor and dermatologist at Saint-Louis Hospital in Paris in the early 19th century. Focused on his life, work and posterity, this talk deals with Alibert’s early poems and explores his literary network, including his role of mentor for poets. It also examines Alibert’s printed texts and their reception. Here the style of the doctor-writer is crucial not only for medical writing but also for questioning fame, recognition, disqualification and image of the great doctor. This case study thus emphasizes different types of interactions and some tensions between literature and medicine during the first decades of the 19th century in France. More broadly, it aims to contribute to an interdisciplinary and cultural history of medicine and physicians.’