Late 18th and early 19th century trade cards give us fascinating insights into undertaking. While there were dedicated undertakers, a startling number of tradesman undertook this role as a sideline to their main trades. Often these had an obvious relation to one of the multiple tasks of preparing a body for the grave (trunk makers, carpenters, drapers), administrating the wordly goods of the deceased (house appraisers, auctioneers), or equipping the mourners (drapers, hatters).

There are some curious juxtapositions, however: Venetian blind makers, for example and brush manufacturers.

More than one tradesman omits to mention undertaker on his trade card and adds it by hand.

Trade cards reveal much about funeral practices in the 18th and 19th century, not least through their imagery. Depictions of funeral processions, hearses, the apparel of horses and carriages, mutes, and coffins differ from other sources in that they do not record an actual event but rather encapsulate in the restrained medium of a small-format engraving the correct appartenances of a funeral.

Funerals, even of the less afluent, were elaborate in 18th and 19th century England and codes of mourning dress and etiquette were to be strictly observed.  Charles Dickens notably decried the pomp and circumstance (and attendant expense) of even humble funerals and the employment of paid mourners, notably in the form of ‘mutes’, who kept vigil outside the house of the deceased and then accompanied the coffin.   Oliver Twist is perhaps literature’s best-known mutes, during his apprenticeship to Mr Sowerberry.

Their dress was distinctive: dark clothes with a sash, top hat and a stave swathed in black crape, although white was used for the funeral of an infant.

Trade cards and bill headings which give prices for undertaking services are also invaluable to social historians. The example below gives extensive detail of the components of each of nine classes of funeral for adults and four for children (but alas is not dated). 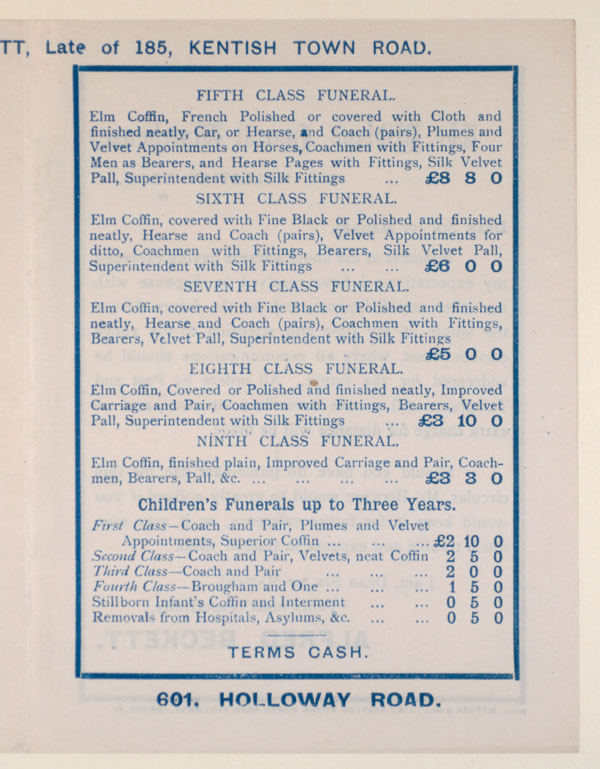 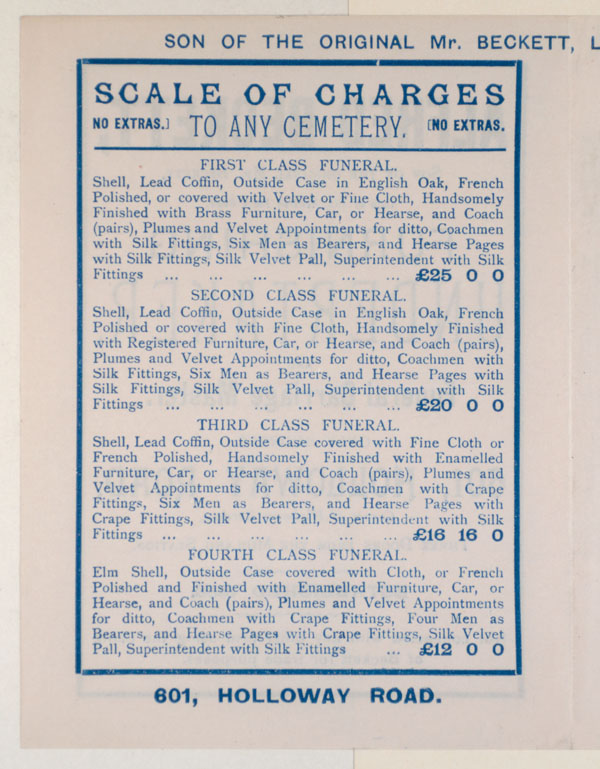 Trade cards (but not bill headings) in the John Johnson Collection are catalogued and digitised and can be accessed through our online catalogue. Undertakers as a primary trade are at shelfmark Trade Cards 28, but in order to find the multiplicity of cards which include undertaking, set the scrollbar to Subjects, Trades and Products in browse.