If you work for a large corporation – particularly in a Sales capacity – you will probably be familiar with incentive programs. They are not unique to the corporate world, and an interesting historical example is the Strength Through Joy travel programs offered in Nazi Germany during the 1930s.

Global tourism was in recession, and in order to maintain German tourist resources – and jobs – a series of travel incentives were offered through the Strength Through Joy movement. My understanding is that low-priced domestic tourism was available to the Party faithful as a reward for their support and contributions. The level of tourism was related to the amount of that support, and ship cruises were at the apex of possible rewards. 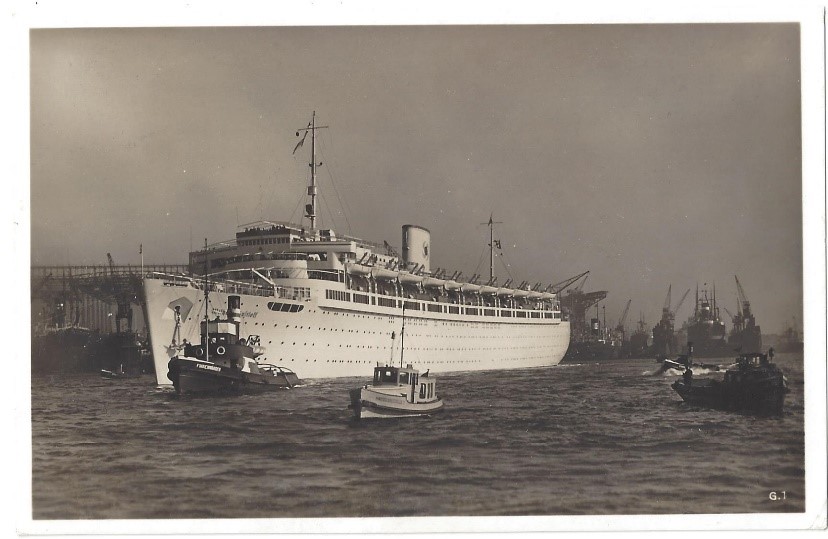 A ship named the Wilhelm Gustloff was built and launched in 1938 specifically to cater to this travel trade. Noteworthy is that this was the first liner built specifically and solely for cruising. At over 25,000GRT, she was larger than many of the liners used by Cunard for Tourist Class trans-Atlantic service, and represented a significant landmark in ocean liner cruises.

When Gustloff went into service in April 1938, she represented the highest travel reward for a Party member or supporter. This postcard, written on the first day of her Maiden Voyage and postmarked with a Wilhelm Gustloff cancellation two days later, would make a significant statement to the recipient about the sender’s elevated stature in the eyes of the Nazi administration. The message may be mundane but the postmark tells it all. 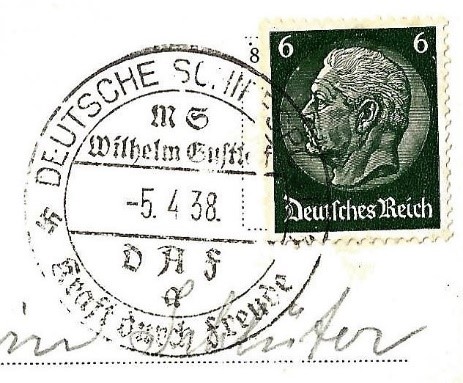 Wilhelm Gustloff was in cruising service for only a short period of time. In September 1939 she was requisitioned by the military and used primarily as an accommodation ship during the war. In January 1945, carrying a flood of refugees and wounded fleeing the oncoming Russian army, she was torpedoed and sunk by a Russian submarine in the icy waters of the Baltic. Estimates of the passengers crammed on board range from 6,000 to 9,000 – in the chaos there were no formal records kept. Most of those passengers perished, leading to the greatest loss of life in maritime history.