We are grateful to John Sayers for another post in his series on ocean liner ephemera.

The Allan Line ephemera in The Sayers Collection brings to mind the significant role that the Line played in shipping migrants to Canada. In the late 1800s and early 1900s the Canadian Government worked hard to encourage immigration of all types from the British Isles and the 1890 promotional flyer illustrated was a fascinating part of that effort. A specific example was the Home Children, orphaned and abandoned and then taken in by the Barnardo Homes among others.

A local building in our own home town in Canada housed Home Children a hundred years ago and they reportedly all came on Allan Line ships. One of the Niagara-on-the-Lake Museum’s prized artifacts is a child’s simply-constructed wooden box addressed as being sent via Allan Line’s RMS Corsican.

Coincidentally, the immigration promotion activity produced good business for the Allan Line. This flyer was found with an Allan Line Passenger List and hinted at the impetus for that traveller’s voyage. But if they were immigrating, he or she wasn’t your regular Steerage passenger, because Steerage Class received little documentation. Only a non-steerage passenger would receive a Passenger List or a Menu with a choice of meal offerings. The Home Children being sent to Canada would have had to accept whatever food was plopped onto their plates.

Other Allan Line ephemera in the extensive Sayers Collection includes a Landing Pass from a Corsican passenger, a Mr. William Harrison, showing that he had passed the Medical and Civil Examination criteria. And on the back were instructions in all of the major European languages, confirming that some passengers did not originate in the British Isles. Nationals of other countries were also looking for a new life in the New World.

We are, as ever, very grateful to John Sayers for supplying us with blog posts contextualising treasures from his collection, now being transferred to the John Johnson Collection

This sad black-and-white image of a great liner, the S.S. L’Atlantique, has two aspects to its story. The first element is the ship itself, which went into service in 1930 for a subsidiary of the French Line for service to South America. At some 40,000 gross tons she was the largest – and the most luxurious – of all the ships providing that service.

If she had the good fortune of being like other newly-built ships of her era, she would have at least lasted until the beginning of the Second World War in 1939. Unfortunately, a fire broke out in August 1933 while she was being moved through the English Channel for some reconstruction work. The fire could not be extinguished, and she was totally destroyed.

A typed tissue label glued to the back of this crisp 8×10 inch photograph reports:

And herein lies the second part of the story. The fascinating image is a Press Photo, a remnant of the pre-digitizing age when a number of businesses specialized in providing timely photographic news images, along with a brief narrative on the back, to major newspapers. This crisp image, and a typed caption glued to the back, was labeled as by the Sport & General Press Agency Ltd, London.

Each publication would have a library of these photographs, so that after their first usage they would remain available for any future news articles. Can you visualize drawers and drawers of historical 8×10 glossy photographs with brief but convenient captions on the backs? Guess where all these went when publications adopted digital imaging. What was once widespread is now rare because those drawers and drawers of photos are now digital images on the hard drive of a computer or even stored in a cloud.

The images themselves would have been dumped as unneeded. And the clerks who maintained the files, filing new photos and finding any old ones that were needed for a current story, succumbed to the employment ravages of the computer age. Two stories, each of them marking a sad end to an era.

This seasonal blog post is based in part on exhibits in The Art of Advertising exhibition (figures 3, 4, 6, 8).

Certain products stand out for the competitiveness of their advertising. Lotteries and soap are obvious examples. The marketing of cocoa and chocolate, although less innovative, was prolific. It is in striking contrast with the perception of chocolate in our own time.

The earliest cocoa advertisement in the John Johnson Collection is a handbill produced by Anna Fry (between 1787, the death of her husband and her own death in 1803). Joseph Fry had taken over Churchman’s patent (the first in England, 1729) in 1761.  It contains elements common to cocoa advertising for decades, especially claims of health benefits (often with medical testimonials).

This Cocoa is recommended by the most eminent of the Faculty, in preference to every other kind of breakfast, to such who have tender habits, decayed health, weak lungs, or scorbutic tendencies, being easy of digestion, affording a fine and light nourishment, and greatly correcting the sharp humours in the constitution.

Advertisements and labels for cocoa often also included directions as to how to prepare the beverage.

Until the 1850s, cocoa was consumed solely as a beverage.

For decades after that, until ways were found of adding less expensive ingredients to cocoa, it was marketed to the rich, as exemplified by two of the items in  our exhibition The Art of Advertising.

However, rather than the self- indulgence that forms the major selling point of chocolate today, the emphasis was on the health benefits.

This Cadbury’s advertisement (fig. 4) is fascinating, not only in showing the benefits of cocoa to all ages (by implication of a certain class: the nursemaid seems to be excluded from partaking of the beverage) but for the scientific table showing the comparative value of foods. Here, Cadbury’s cocoa is favorably compared with raw beef and mutton, eggs and white bread and, in the smaller print below the table, with some of the best meat extracts. The terminology:  Nitrogen (flesh forming!), Carbon (heat giving) is counter-intuitive to a modern viewer only too aware of the fattening effects of chocolate consumption and not attuned to the nutritional value of ‘pure’ cocoa.

Sweetness also became a selling point of chocolate, as in this F. Allen & Sons advertisement produced as a souvenir of the International Health Exhibition in 1884.

Another striking advertisement by F. Allen & Sons reminds us that cocoa was strongly associated with the Temperance movement in Britain.  The inclusion of an image of a family in abject poverty (due to the father consuming liquor) is shocking, as it was meant to be. The implication that it was within the power of the family to elevate themselves out of poverty by buying cocoa instead is no less so.

Although filled Belgian chocolates date from 1912, the first chocolate bar was marketed by Joseph Fry & Son in 1847 and chocolates began to be sold in the 1850s. This J. S. Fry’s advertisement gives an idea of the range available in 1859.  Fry’s are also credited with the creation of the first chocolate Easter egg in 1875.

In 1911, the contents of Rowntree’s Elect Coronation casket looked not dissimilar similar to chocolate selections today.

We are grateful to John for sending guest posts about the treasures of the Sayers Collection of Ocean Liner Ephemera, now being transferred to the Bodleian Libraries where it forms one of the named collections added to the John Johnson Collection.

I already had in my Ocean Liner collection a postcard of the Canadian Pacific Pavilion at the British Empire Exhibition (Figure 1) drawn by an artist whose signature is illegible. Recently, I found a booklet describing the Pavilion, with a similar cover image as the postcard, drawn by P. A. Staynes. But it also had a centrefold drawing of the beautiful interior of the Pavilion (Figure 2). Since it was a promotional item, it also carried CP advertising, including a captivating page promoting their services to the Far East (Figure 3). This ephemera is a realm beyond postcards.

So much for the Ocean Liner element. But to appreciate the significance of the Exhibition and whether CP was relatively prominent, one has to go beyond this single building at the Exhibition to look at the larger aspect of the Fair itself. At this time the British Empire of Queen Victoria’s era was relatively intact. There were rumblings of a thirst for independence in the colonies, notably Gandhi’s activities in India, but the sun hadn’t yet set on the British Empire.The Exhibition was officially opened on April 23, 1924 so the booklet would have been harvested by an Empire Exhibition visitor who was among the eventual 27 million visitors to this largest-ever event of its type to this date.

This was a landmark event, but it also flags the high commercial status of the Canadian  Pacific organization.

Broadening the focus from Ocean Liner companies to the nature and extent of the Fair itself, and having come to appreciate the significance of the event, one can now place the Canadian Pacific Ocean Liner material’s British Empire Exhibition component in its proper context within the Sayers Collection.

This material, and a significant amount of other Canadian Pacific shipping ephemera such as Passenger Lists, Brochures, Menus and Cruise Activities, is contained in The Sayers Collection in the John Johnson Collection at the Bodleian Library. A vast quantity of other ocean liner ephemera capturing social, shipping, historical, and commercial information in The Sayers Collection, continues to migrate across the Atlantic to the John Johnson Collection. 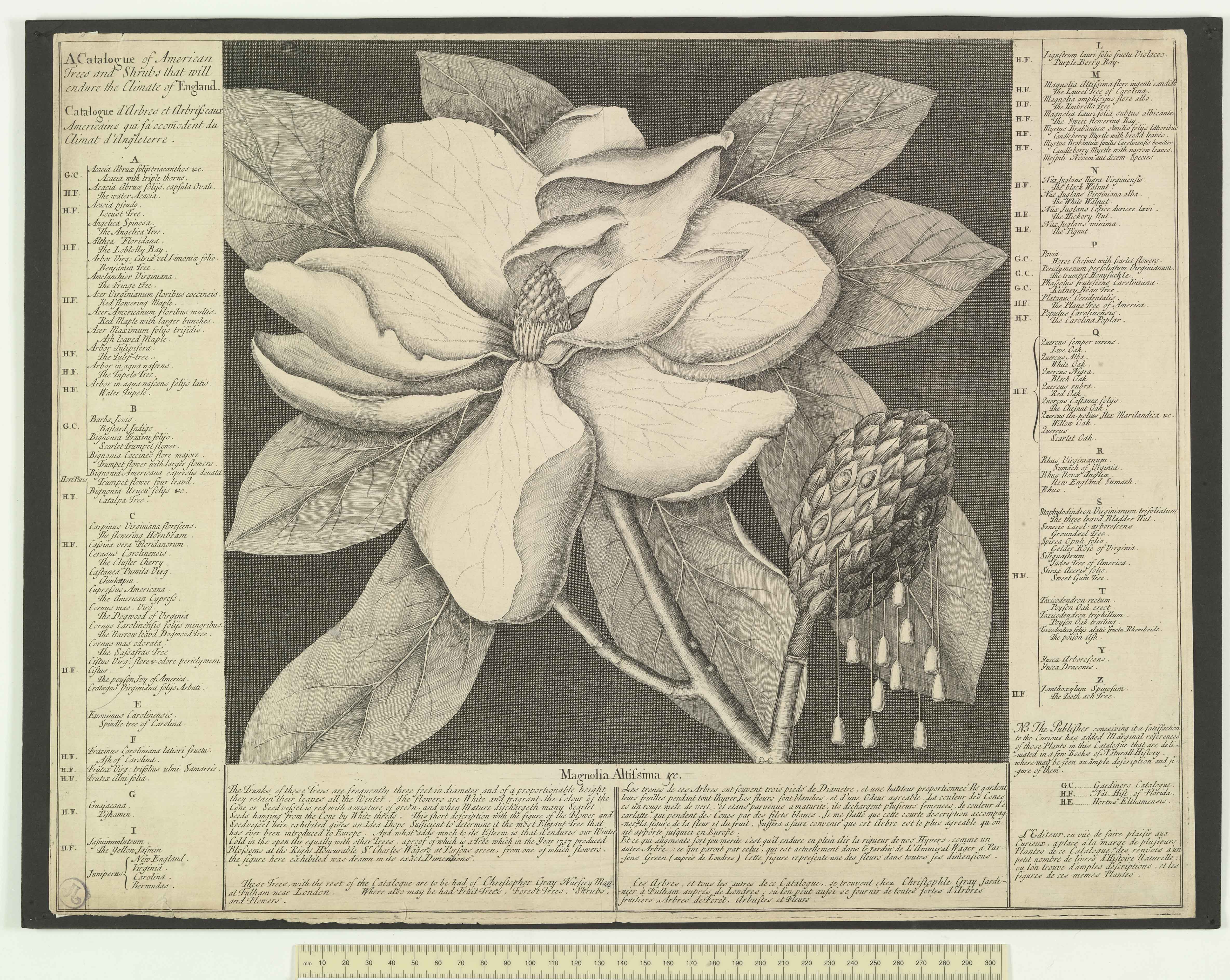 A catalogue of American trees and shrubs that will endure the climate of England, Christopher Gray, Fulham, [c. 1737]

The second item in our Printing case exemplifies copper engraving and etching, and is accompanied by the following description of the process:

In copper engraving and etching the print is taken from hollowed-out marks on a copper plate. These marks were inscribed through a coating that resists acid, and then subjected to etching, or physically engraved into the copper with a tool known as a burin. Often the plate was first etched and then engraved.
To take a print, ink is forced into the recessed lines, and the surface cleaned of ink. A sheet of paper is laid on top of the plate and pressure from the printing press forces the ink out of the hollows. The process was capable of great delicacy, although the soft copper plate would wear out over time. Text could be engraved as part of the plate, as in this example, but if type was needed, the two had to be printed separately.

This exquisite broadside is unusual in combining masterly etching and engraving with extensive alphabetical and bilingual text. Christopher Gray (1694-1764) specialised in plants from North America. This catalogue, referenced in the DNB article for Gray (odnb-9780198614128-e-37479) includes dogwoods, tulip trees, maples and American oaks as well as magnolias. The illustration of a magnolia altissima (or grandiflora) is based on a drawing by G.D. Ehret.

The title is unusual in explicitly identifying this item as a catalogue. It is more elaborate than a shopkeeper’s bill, but terminology was fluid. Another 18th century single sheet, similarly identified in its title as a catalogue: A Catalogue of Goods, sold Wholesale and Retail, by Gillery Pigott would usually be styled as a ‘shopkeeper’s bill’ or a tradesman’s list.

The John Johnson Collection is fairly rich in Horticultural ephemera. Early seedsmen’s lists are kept in two guard books (Bodleian shelfmarks: Johnson a.50 and Johnson d.1640). These are catalogued on SOLO (advanced search by shelfmark) and were listed by John Harvey in his Early Horticultural Catalogues: A Checklist of Trade Catalogues Issued by Firms of Nurserymen and Seedsmen in Great Britain and Ireland Down to the Year 1850, Bath, 1973.

There are also trade cards, such as those of Arabella Morris and Humphry Repton.

The main trade card sequence of the John Johnson Collection can be searched through our Zegami project.