Colour printing began to be widely used in commercial printing from the second half of the 1830s. One approach was to use a set of wood-engraved blocks, each one dedicated to a particular colour. The engraver could produce a range of tones for each colour through lines and other marks engraved on the wood blocks. When printed one after the other the colours blended visually.

This modestly sized magazine insert for Harper Twelvetrees’ soap substitute ‘Saponine’ is a fascinating document.  Not only does it include a rare image of a working laundry, but it is also interesting as an example of one of the experimental colour printing techniques that competed with chromolithography.

In this example, just four blocks – red, yellow, blue and black – create a range of colours, shades and tones.

Soon to be supplanted by the commercialisation of chromolithography, examples of colour wood engraving in advertising are not very common. There are, however, others in the John Johnson Collection, including this advertisement for  Tomlinson’s Butter Powder, from c. 1867.

Harper Twelvetrees was an interesting man. In 1863, as Chairman of the John Anderson Committee, he edited The life of John Anderson, a fugitive slave (published by William Tweedie, London). He was also a staunch advocate of the Temperance Movement. Saponine was produced in his factory in Bromley-le-Bow.

However, by 1878, he had given up soap making and had moved from Bromley-le-Bow, though not entirely from the East End. His works and East End showroom (the Paragon Show Room) were at Burdett Road, Bow Road (shown in the illustration). However, styling himself ‘Laundry Engineer and Machinist’, he also had a City showroom at Finsbury Circus.

His speciality was laundry equipment, such as washing machines, clothes wringers and mangles.  He also made knife cleaners and sold meat, suet and vegetable choppers, lawn mowers, fret-work scroll saws and treadles, lathes, and boot- and shoe-cleaning machines.

He offered free trials and hire purchase for his washing machinery. 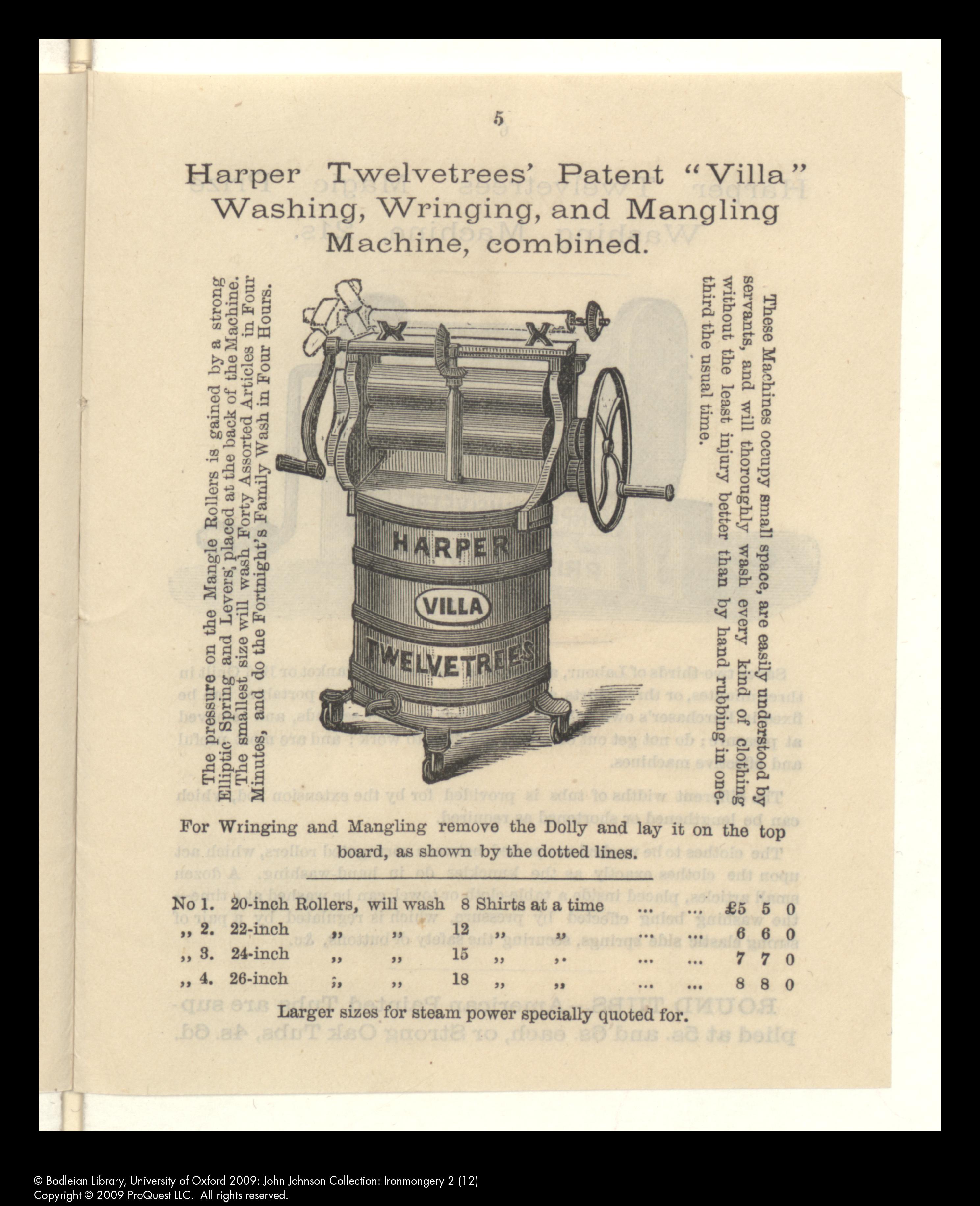 But to return to laundries and the question of soap, the other laundry image in The Art of Advertising exhibition evokes some of the same problems: heat, steam and chapped hands. Harper Twelvetrees’ solution was a soap substitute (presumably, given the name, a saponin) while Lutticke’s appears to be a soap. Both resonate with us today, as we are encouraged to do cold water washes (albeit for different reasons). And Harper Twelvetrees got something else right too: one of our favourite labour-saving devices is surely the washing machine!