The John Johnson Collection of Printed Ephemera has an amazing number of lottery handbills from the 18th and 19th centuries. I have found them endlessly fascinating and love cataloguing them. There are humorous ones; beautiful ones, some coloured and embossed; others with grotesque caricatures or funny little stick figures in strip cartoons telling stories of how lives might be changed with a lottery win.

Mainly because of his popular and ingenious lottery handbills, Thomas Bish of Cornhill and Charing Cross, London, was one of the best known lottery-office keepers of his time, c.1790-1826 (when lotteries were banned). In fact there appear to have been two characters with this name, Thomas Bish the son having taken over the business quite seamlessly from his father. Certainly they were two of a kind, shrewd and successful entrepreneurs who between them built up a network of agents all over the country, but I like to imagine them with a wicked sense of humour taking a childish delight in the silly jingles and verses and the always eye catching images they produced. Every opportunity was taken to promote the name of Bish and their lucky lottery offices. All the high days and holidays, celebrities, royalty and political situations of the day were exploited to ‘big up’ Thomas Bish. Wouldn’t they have loved the pop up adverts of today with sound and vision!

Their ‘enigmatical handbills.’  so called by John Ashton in his A history of English lotteries  (Leadenhall Press 1893), with their puzzle pictures, word puzzles, hieroglyphics or rebuses were very widely distributed.

This example has the answers provided.

But there are no answers on this bill.

We have solved some of them but we hope you can spare a few minutes to puzzle out the locations of Bish’s agents – no prizes, not even one pipe of wine – we would just love to fill in the gaps. 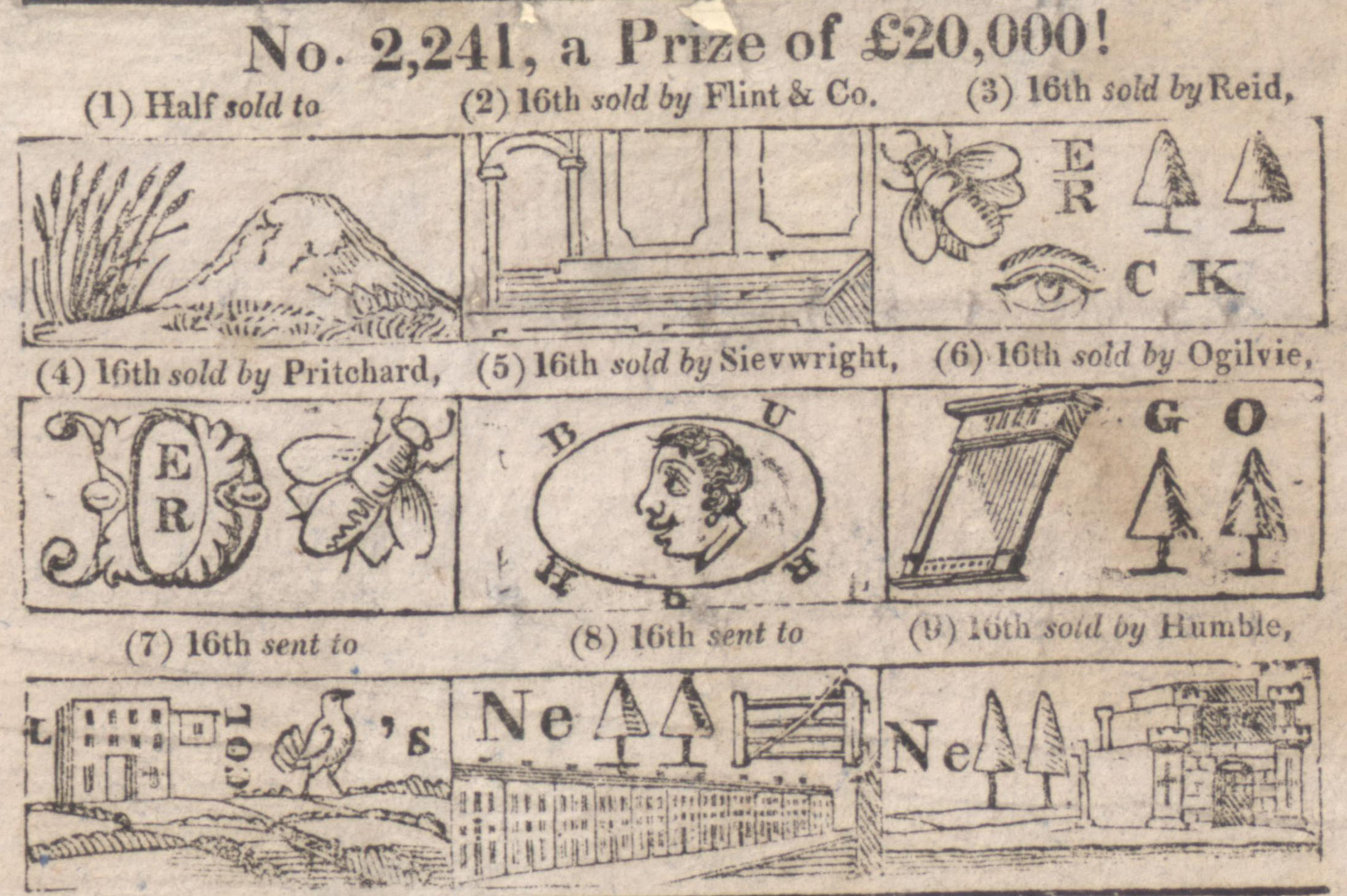 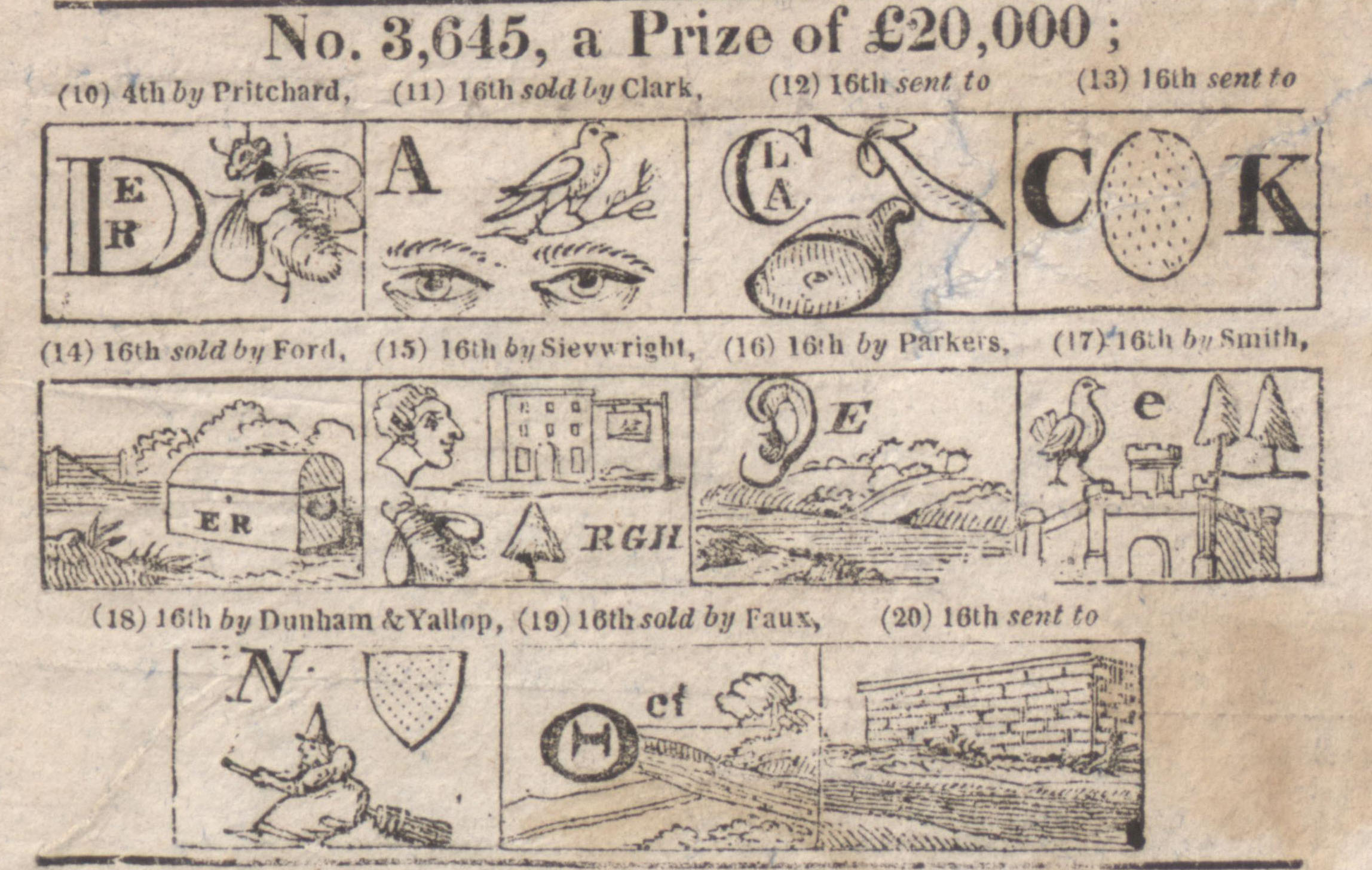 During my first visit to the John Johnson Collection, I had a peek at some Magic Lantern Slides for the first time in my life. I had never seen any before so they held some mystique for me. I knew that lanterns and slides were artefacts from a bygone era that would eventually lead to the development of the cinema. When I opened the first folder of the cinema collection, I was immediately drawn to a set of slides of the first Robinson Crusoe story. There he was building a canoe, exploring in his outfit of goat hides, finding footprints in the sand, etc. On arriving home that night I set out to find a copy of the book which I have been working my way through.

I recently catalogued this set of images. There are twelve illustrated scenes that were transfer printed on paper by Theobald & Company, London. Lanternists would cut the transfers into squares and position each between two pieces of glass to form a magic lantern slide. These slides would then fitted into a slide holder which would eventually be placed into a magic lantern during a show.

Try as I might, my efforts to find the associated printed lecture have been unsuccessful. Therefore I used my knowledge of the story (reading Daniel Defoe’s novel was key) to help ascribe classification terms to the images.

However, I had difficulty with one slide in particular. Slide number eleven was mysterious. What is happening there? Is Crusoe subjugating a human? The fact that the person is shirtless and is prostrate in front of the armed Crusoe leads me to think that it is Friday thanking Crusoe for saving him from cannibals. However, this idea does not fit with the chronology of the preceeding slide: number ten shows Friday helping Crusoe free his father and a Spanish Castaway from a group of armed men. By this time the two had already met and become friendly. Who could it be, then? Maybe it was Friday’s father, whom they saved in slide ten, but I could not corroborate this. Because of it’s vagueness, I have decided to avoid affixing a narrow classification term to the slide. Instead, I will use “lifesaving” and “rescue” to describe slides ten and eleven as a set. How would you have described this enigmatic slide?

2012 is a wonderful year for topical ephemera: two days ago there was the anniverary of the Queen’s accession, for which I tweeted one of my favourite advertising images from the Diamond Jubilee of Queen Victoria: ask for Golfer Oats.

Yesterday, was Dickens’ bicentenary and I put up a new image gallery on the Johnson website. The Bodleian exhibition Dickens and his world, which will include many ephemera, runs from June 2 to October 27.

Next week, the focus will be on Valentines, with extra impetus from the Ask Archivists initiative, (Twitter #loveheritage).    Then more for the Jubilee and the Olympics. Watch this space!

The John Johnson Collection Ephemera Resources blog, which now has 60 posts, aims to accumulate a useful and growing guide to the many websites, books, articles, exhibitions and blogs either wholly or partially devoted to ephemera.

In the course of my work, I often refer readers and enquirers to other collections and see this as an easy and attractive way to build up lists of resources, both electronic and non-electronic, for a wide range of subjects and issues (such as dating, conservation and crowd sourcing) through tagging.  I include screen shots wherever possible and am learning a lot about the ways in which other institutions and ephemerists surface their ephemera online. 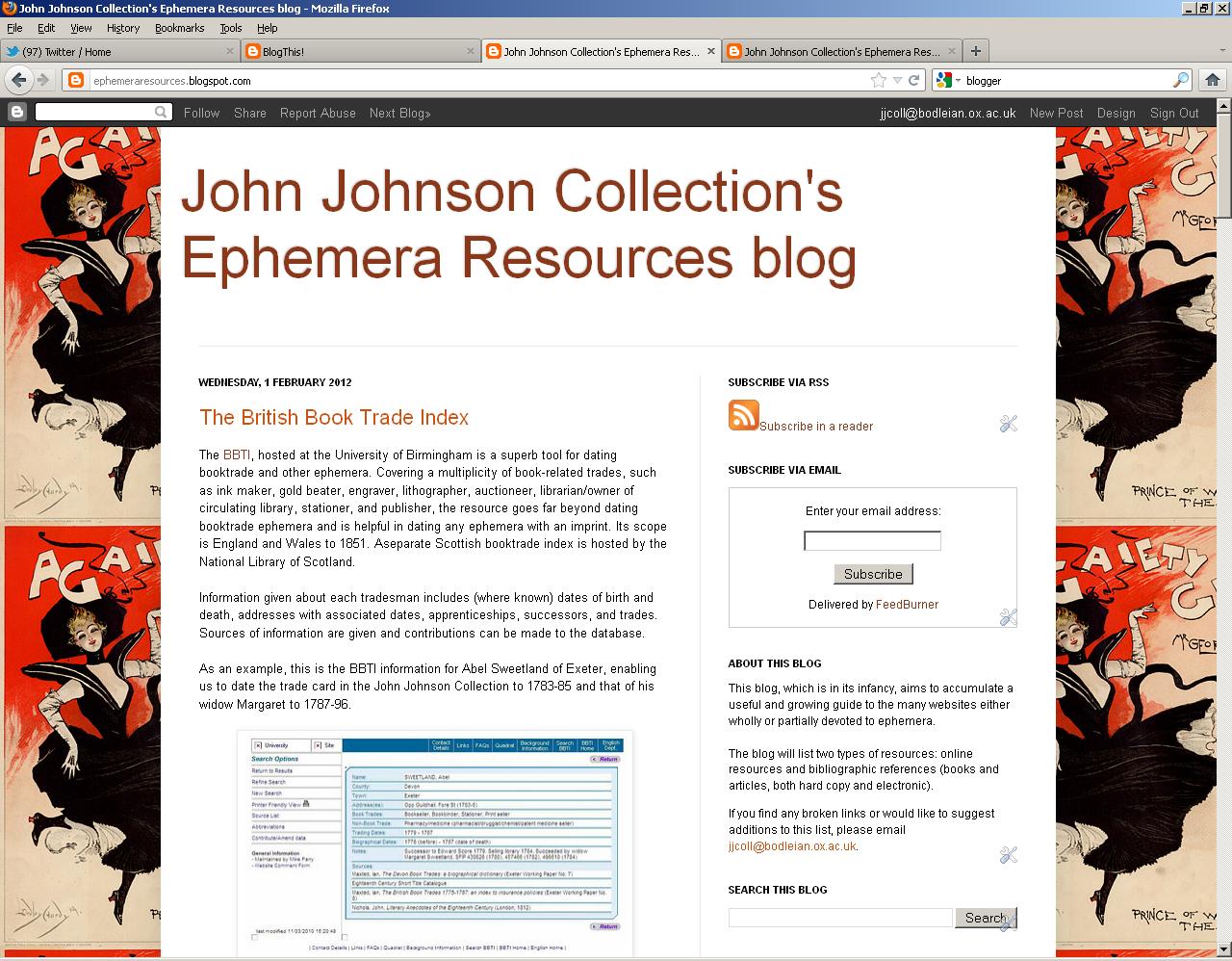