Full-text journals added to LexisLibrary in the last year or so are listed below (together with start date of Lexis holding, and the Law Bod shelf mark where applicable):

The list ends with two complete newcomers to the Law Bod collection, so a brief introduction seems polite!
The very last journal is a peer-reviewed open access journal, published quarterly by the International Association of IT Lawyers (IAITL). It is one of the new breed: it is not published in hard copy. However, print copies of the Irish Law Journal should soon appear on our shelves via the Copyright Deposit Agency. This journal is the peer-reviewed, student-led publication of the National University of Ireland, Maynooth. A law faculty committee led by Professor Michael Doherty and Mr Seth Barrett Tillman, act as advisers.

The International Review of Intellectual Property and Competition Law is probably better known by the abbreviation used in citations ICC. Lexis coverage starts with v.24 (1993), so this title has the oldest back set of all the additions to Lexis . (The same length of run is available via Westlaw UK.) This certainly improves on the Law Bod holding of the print copy which is “incomplete” – at least for issues after v.35 (2004) (In our defence, our run of volumes does start with v.14(1983)!) However, holders of an Oxford Single Sign On (OSS) may be interested to know that they already have online access to the full run (from v.1 1970) onwards via the Law Bod subscription to BeckOnline: don’t be put off by the fact that this is a German law, German language database, it does include those English-language patent case notes for which ICC is often in demand.

The Lexis holding of Uniform Law Review starts with v.1 – but this of the New Series, starting in 1996.  The first series, 1973-1995, often referred to by the French version of its title first Revue de droit uniforme, is available to holders of an OSS via HeinOnline   Both series are on the Law Bod’s shelves at Private Int 300 U20.

Infact holders of an OSS have already been able to access many of these titles (or at least sections of them) now available on Lexis via other subscriptions taken out by the Bodleian Law Library. (Remember the Search our law reports and journal tool should always be used in combination with a SOLO search to check whether a legal periodical is available online.) Even so their addition to LexisLibrary is to be welcomed as it should spare time and effort hunting the correct database for the volume(s) you need, only to be confronted by a database (and its search screens) with which you are not familiar …

LexisLibrary – alongside Westlaw UK – quickly become the databases of primary and regular resort for students of law at Oxford. But just because they are homes from home doesn’t mean that we can entirely relax our guard when it comes to search skills…  In this instance two of the listed journals are not included in the “All subscribed journals sources” (the default option) on the Lexis Journal search screen. The two that need to be brought into play via the More sources link are the Journal of Media Law and the Journal of Private International Law. 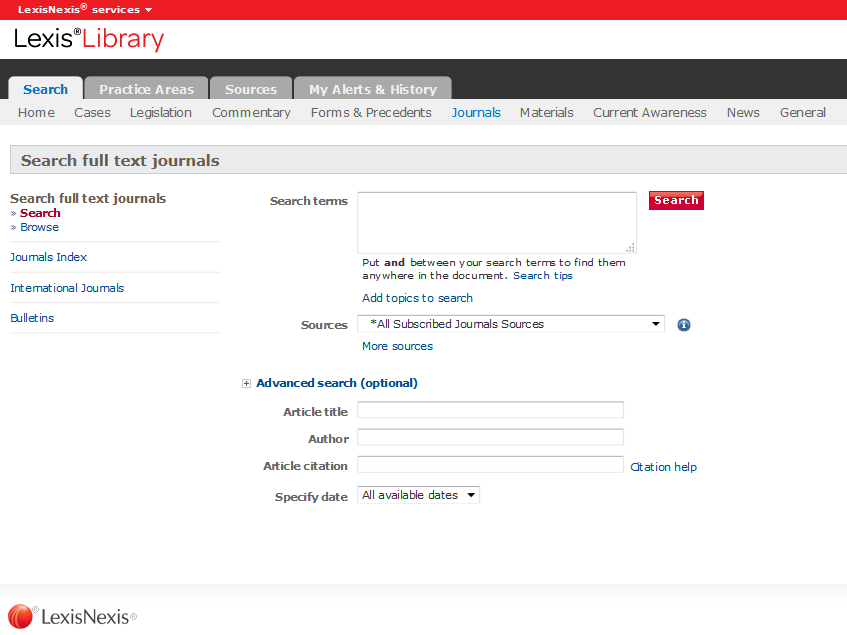