This coming Saturday, 5 July 2014, Oxford will be celebrating Alice Day, in memory of that golden afternoon in 1862 when a small boating party led by a mathematics don set off from Folly Bridge towards Godstow – and returned with a whole cargo of fictional characters.

5 July 2014: A storyteller will perform in the Old Schools Quadrangle at about 1.30pm for half an hour.

The prime instigator behind Alice’s Day is The Story Museum, but University institutions such as the Botanic Garden are participating too. Christ Church is always on the Alice literary trail – whatever the day of the year! So too the Oxford University Museum of Natural History, a painting in its collection became so inflential in everyone’s  image of a dodo. Probably less obviously connected to the Dodgson trail is the Museum of the History of Science, but it does have some of his photographic equipment: Wet Collodion Outfit of Photographic Chemicals  Its website also shares an example of one of Dodgson’s photographs: two little girls (not Liddells) are dressed up, rather fittingly considering the Godstow connection, as Fair Rosamund and Queen Eleanor. (It is unfortunately difficult not to let the revelations of Operation Yewtree etc influence our responses to many of his photographs of children, but they do come from a different age.)

It is the British Library rather than the Bodleian which holds the manuscript of Alice’s adventures underground BL Add. MS 46700(which became the Wonderland volume) but as they make it freely available in their Virtual Book online library, it is hard to be resentful. We suspect that few Alice devotees realize that the Law Bod can offer them something “curiouser” …  Alice’s adventures in Jurisprudencia! (Though a 1982 product of the Borogrove Press (US), a copy has only recently reached our shelves.)

In this volume, the adult Alice, baffled and exhausted by a visit to her lawyer, is getting drowsy in her comfortable armchair, watching a court room drama on TV  … . She suddenly finds herself in a field, where the very ground she stands on is covered in writing.  When she tries to read it the “language [is] strangely familiar but at the same time largely unintelligible” … .  Or a “perfectly ordinary piece of conveyancing” (of c.1939) as the first character she meets is happy to tell her. Alice thinks his face is somehow familiar, then recognises it as an unsettling composite of her childhood friend the White Knight and the TV lawyer.

In the following chapters other Carroll characters appear in legal roles and contexts. The author, Peter F. Sloss, was careful to end his preface “Any similarities between the views of Humpty Dumpty [“When I use a word … it means just what I choose it to mean – neither more nor less”], the Lord Chief Justice of Jurisprudencia, and American judges are undoubtedly coincidental, since to Americans Jurisprudencia is a fantasy kingdom, while to Jurisprudencians the United States of America does not exist.” (We think the author was a graduate of Yale, and a practitioner in the US.)

For those worried by the eventual fate of the accused in the case of the missing tarts (which remains undecided when Alice is called out of Wonderland),  the last chapter of in Jurisprudencia may provide some comfort: it transpires that arguments for the death penalty had not been successful … though could the Knave’s fate be deemed to have been cruel and unusual?

The weather today is as conducive to whimsy as it must have been in 1862, so we now ask whether a court room setting could have been in Dodgson’s subconscious mind thanks to the recent passing of the Oxford University Act 1862 (25 & 26 Vict.) c. 26? As clearly answers such as “No!” or  “Probably Not!” really mean “Pray continue,” we shall …

Although the aforesaid act was largely about the University’s legislative powers, it included:
“[section] 12. …. be it enacted, That the Vice Chancellor of the said University may from Time to Time, with the Approval of any Three of the Judges of Her Majesty’s Superior Courts, make Rules for regulating the Practice and Forms of Procedure in all Proceedings within the Jurisdiction of the Court of the Chancellor of the said University commonly called the Vice Chancellor’s Court, and may from Time to Time, with the like Approval, annul, alter, or add to any such Rules.” 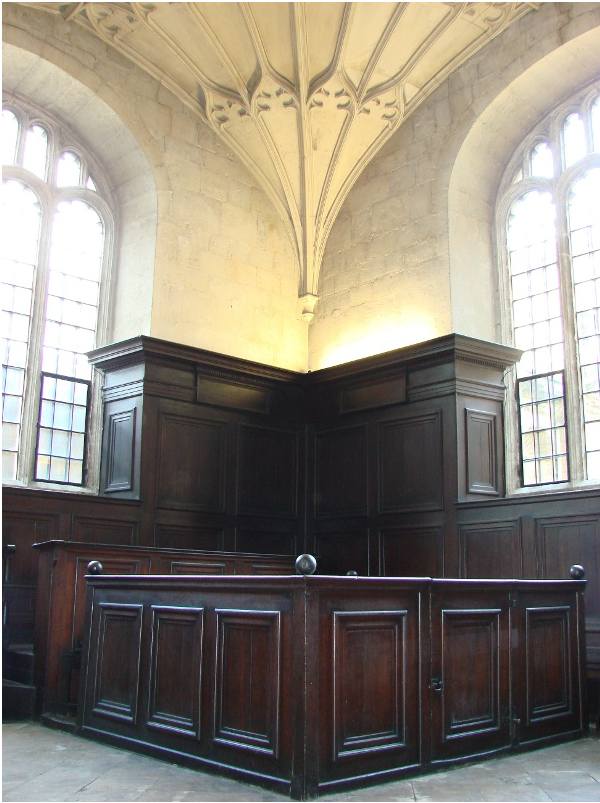 The Court room as it survives today: it could be hired for a tea party!

The Oxfordshire VCH has sections on this court’s (13th ecclesiastical law beginnings – when the chancellor had the right to punish clerks “for all offences except atrocia crimina” –  and the early modern period  by which time its criminal jurisdiction (below felony and mayhem) extended to all cases where one party was matriculated at Oxford. The court was still functioning in Dodgson’s days  – Alice’s father would be Vice-Chancellor from 1870–74 – though according to the VCH  “… by the nineteenth century the court was confined almost entirely to civil actions … “ But in honour of the spirit of the occasion, we refuse to let the truth spoil a good story. The Knave of Hearts could well have been matriculated – for matriculation was not restricted to students or academics, but embraced servants to academics and local tradesmen, who needed privileged status to trade with the University. (See VCH for further explanation of privileged tradesmen early tax avoidance, unfair competition and bad blood in town/gown economic relations! The surviving records of the court are in the keeping of the University Archives.) Little Alice may well have known the court room, by peering through the windows …

It is clear Dodgson/Carroll was a shy man, who hated the celebrity side of his success  (it became a burden for the grown up Mrs Hargreaves too), but Dodgson was prepared to argue for the proper remuneration of authors He may therefore have been pleased to know that his Jabberwocky poem helped the English bench consider the extent of copyright over a hundred years later. Exxon Corporation and Others v Exxon Insurance Consultants International Ltd. [1982] Ch. 119.