Expecting a gentle roasting of both bird and profession? Honi soit, gentle reader,  as if the Law Bod would! There is no “other” in the title hereinbefore set forth, and deliberately so. No. We have in mind an excursion into the history of food customs in England.

A turkey as centre piece of Christmas dinner is a tradition of comparatively recent standing. There is probably an academic paper explaining the exact time when each of the older homegrown alternatives – boar’s head, brawn, and beef – died out. But the general reader can play amateur detective too. (In Persuasion, for example, the apparently minor detail that the Christmas side table at the Great House at Uppercross was “bending under the weight of brawn and cold pies” probably reinforced the old-fashioned nature of the Musgrove seniors to Jane Austen’s contemporaries.)

We have found some clues implicating Tudor lawyers with the early adoption of turkey at feasts which in the spirit of Christmas generosity we would like to share. But first a problem of definition … 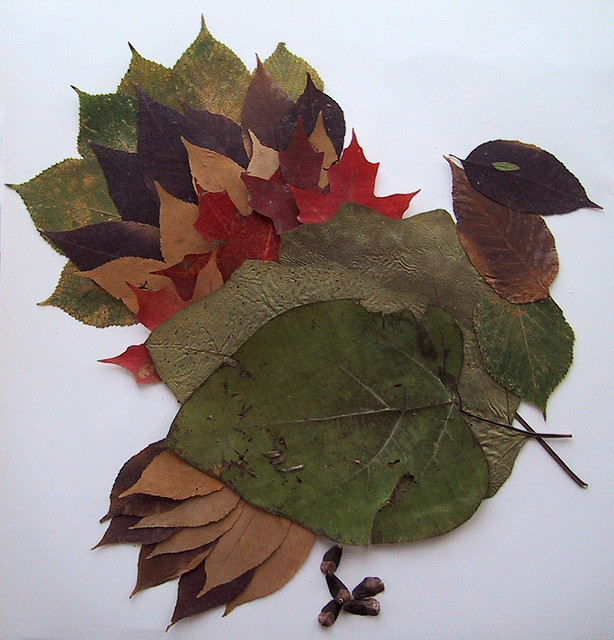 Sometime in the first couple of decades of 1500s, an exotic large bird was imported into England. For reasons, now lost, it was believed to have come from or via Turkey. (No-one seems to suggest the possibility of a folk etymological “corruption” of some native name.) So the bird was called a Turkey-cock. When a second type of large bird arrived, it seems to have been taken as just another species of the first: contemporary science would not have been able to tell them otherwise. So a Turkey it was too. In fact,  one was native to Africa (probably bought to Europe via Portuguese trading links with West Africa), the other to North America (probably first brought in from Mexico by the Spaniards). See what chaos happens with no country of origin labelling laws??? Nowadays we are a bit more accurate, calling the former guinea-fowl; but the American birds have remained turkeys to English speakers to this day. 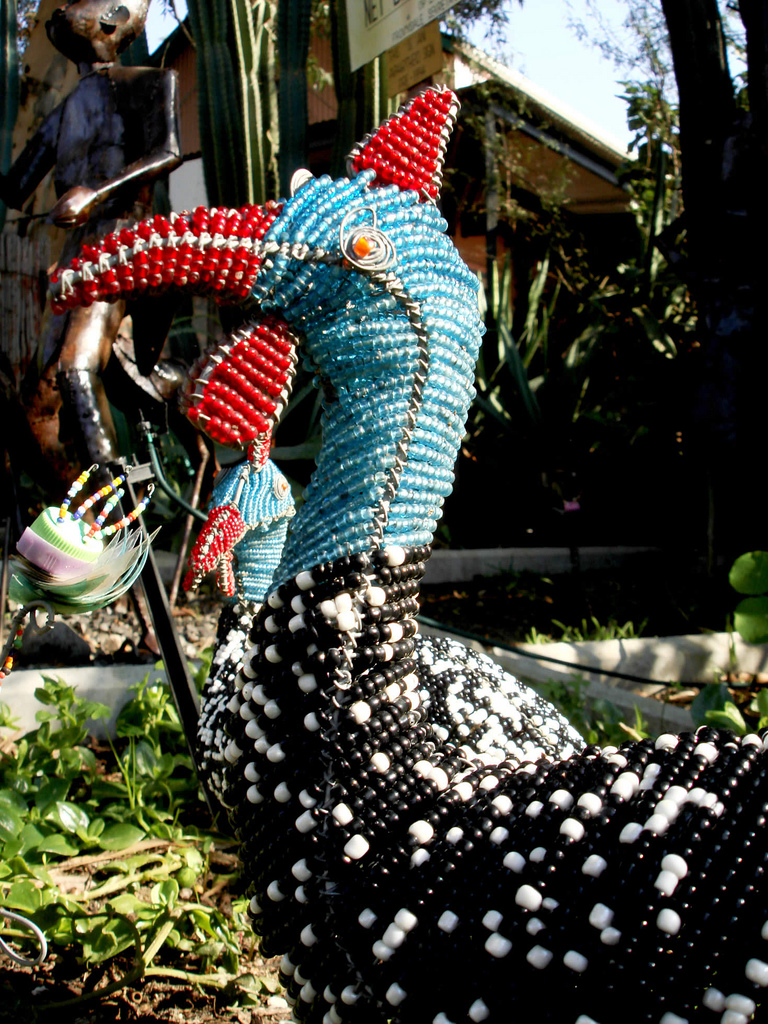 The Oxford English Dictionary (online access requires Oxford SSO) – an authority with whom we would not dare to quibble – currently ascribes the earliest datable and published instance of turkey meaning turkey (not guinea-fowl) to a manuscript transcribed in Dugdale’s Origines Juridiciales (1666). William Dugdale, a practitioner of the laws of heraldry, provides the would-be purchaser with an admirably accurate, descriptive alternative title “or, Historical memorials of the English laws, courts of justice, forms of tryal, punishment in cases criminal, law-writers, law-books, grants and settlements of estates, degree of serjeant, inns of court and chancery : also a chronologie of the lord chancellors and keepers of the great seal, lord treasurers, justices itinerant, justices of the Kings Bench and Common Pleas, barons of the exchequer, masters of the rolls, Kings attorneys and sollicitors, and serjeants at law.” (EEBO: Early English Books Online online access requires Oxford SSO)

In Chapter xlviii, Dugdale included the transcription of a manuscript relating to the catering for the Serjeants at Law Feast, 16 October 1555. This lists “Turkies 2. rated at 4s. a piece..00. 08. 00.” among the provisions supplied by a Mr. Walpole (this is the instance given in the OED). Further down in the same list are “Turky-Chicks 4. rated at iiiis. a piece 00 16 00” from a Mr. Morgan and a Mr. Catlyn.

If one has a late medieval/early Tudor surname and you want to see if he had any connection with the common law, the scholarship of Sir John Baker  now provides the go to volumes for a kick-start to identification of individuals: The Men of Court 1440-1550: A prosopography of the Inns of Court and Chancery and the Courts of Law (SS, Suppl.Ser. 18 (i) &(ii) 2012. SS here is Selden Society) In this instance “go to” means literally walk to a shelf (in the Legal Hist section of the Law Bod) as they are not available online. The 1555 date reveals that among the new serjeants at law (early silks) created that year were a John Walpole originally of Grays Inn, a Francis Morgan of New Inn then Middle Temple, and a Robert Catlyn of Clement’s then Middle Temple. After each is a wealth of sources to follow up – published, manuscript, physical (eg effigies), even heraldic (Dugdale would be happy!).

An Oxford alumnus, graduate therefore in Canon and Civil law (the latter to doctorate level) rather than the common law, gets us closer to linking turkeys to Tudor Christmas-time feasts. He was William Petre – undergrad (and later benefactor) of  Exeter College, then of All Souls.  Among the Petre archives is a manuscript listing the stock remaining in his larder, buttery & pantry on 9 January 1552:
“1 pece lyvery beiffe, a loyne & necke of veale, a nettes tonge, 2 turkye pyes. Bere, 12 kilderkines.”
(This information thanks to Emmison’s lighter work Tudor food and pastimes – sometime we hope to find time for his magisterial Tudor secretary : Sir William Petre at court and home!)

Turkey leftovers, another fine tradition! But as Twelfth Night had been the biggest feast day in the Petre household that year, with over 100 people at both dinner and supper, we think the caterer should be applauded for having anything in the cupboard at all.  A Tudor pie was not necessarily the same as a modern pie: sometimes the pastry crust (flour, water & salt) was not intended to be eaten. The case, or “coffin,” worked as disposable oven to tableware in a world before ceramics and Pyrex. Thomas Dawson included such a recipe  –“To bake a turkie and take out his bones” –  in his The good housewife’s jewell of c1587. No details are given as to how to make the pastry, but after cleaning, boning and trussing, the turkey should be parboiled, then well-seasoned with salt and pepper, and the breast studded with a few cloves, before being sealed in the pastry case with lard (optional), and butter (essential) – clearly Dawson knew the problem of dry breast meat. Final cooking would have been done before serving.

Where were all these turkeys coming from? One more twist in this tale of lawyers and turkeys, again from the Petre archives. In 1566, Sir William, as he had become via a long-serving career in the “civil service” (with just a brief period of practice in the Oxford Consistory Court at the beginning), was settling into semi retirement at Ingatestone Hall. (Still lived in by his descendents) He called on a surveyor, Thomas Lake, to make a through record of the property. He paid close attention to detail: “For the better cherishing of these fowls there is devised by the east side of the orchard from the north-east corner unto the broad gate leading into the hop yard a frame made of thin plank, lattice-like with partitions to keep them in, and is placed from the wall at the least 16 foot and so continueth his breadth. In this frame both partridges, pheasants, guinea hens, turkey hens, and such like do yearly breed and are severally fed and brought up, so as they become tame as other chickens.”

It is interesting to note that either the Jacobean note taker or counsel employed another name for the bird, perhaps drawn from his knowledge of contemporary French. Could this have been an effort to distinguish the birds in the case from guinea fowl?  The question raised by the case was: were turkeys game birds or not? The latter could be the property of someone, and protected by criminal law from theft,  but with ownership comes responsibilities…

If the lawyers of 1624 had looked to their books, court rolls and collective memories what precedents might they have found? Nowadays, thanks to Prof David J. Seipp and Carol F Lee (and the backing of The Ames Foundation),  we can search – online and free! – over 22, 000 cases  recorded in the year books. Putting “tame” and “fowl” into the keywords turns up an interesting case of 1526 – relating to the theft of peacocks, another bird then associated with fine feasts! Mich.     18     Hen. 8     11     2a-2b  “Fitzjames CJKB and the other Justices disoient, que les ‘peacocks’ sont communement de mesme la nature que’hens’ ou ‘chapons’, ‘gees’ ou ‘ducks’ sont, & de eux le ‘owner’ ad propriete, & ils ont ‘animum revertendi’, & n’ est paz ‘foule’ de garrene, come faisant, perdrix, connile, ou hujusmodi, car le prisel de eux ove felonieuse entente n’ est felony; Et al’ derrein fuit agree par Touts les Justices, que ceo prisel des ‘peacocks’ fuit felony pur la cause avantdit.” In the context of this blog, it is interesting to note that neither turkey-cocks nor turkeys appear to be uppermost in the minds of the judges of 1526 as obvious examples.
Of course, if the lawyers of 1624 looked beyond their books to the real world, they would have seen that changes in animal husbandry had made CJKB Fitzjames’s examples of “foule de garrene” open to challenge …

Finally, we reproduce a portrait of Sir William in all his pomp. Take a close look at the charges on his coat of arms …. We would have loved to be able to point out the turkey (or guinea-fowl) strutting its stuff across the centre of his shield…. but alas the spirit of Dugdale ensures we stick to the truth! The bird is a Cornish chough, proper. 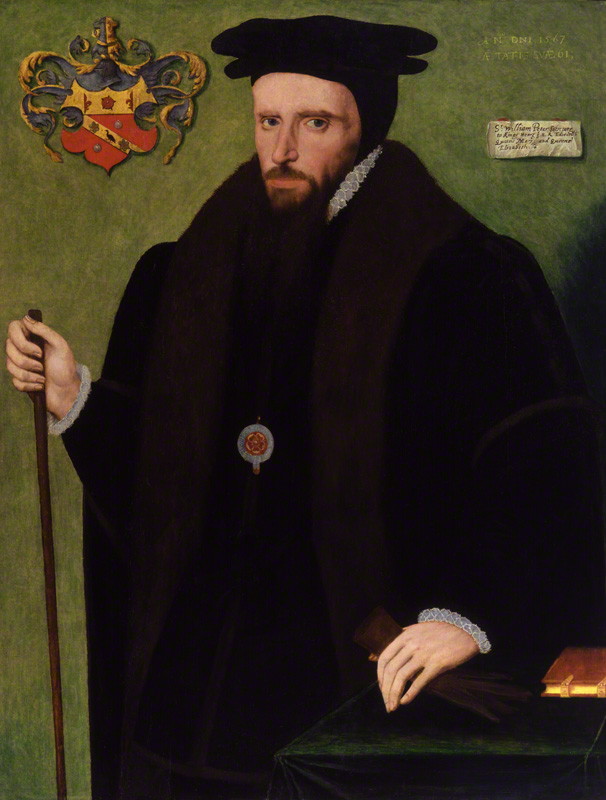