The Tió de Nadal of Catalonia, unlike the bûche de Noël, is not itself edible, yet successfully provides a quick route to a sugar rush  … in a rather “fundamental” way! 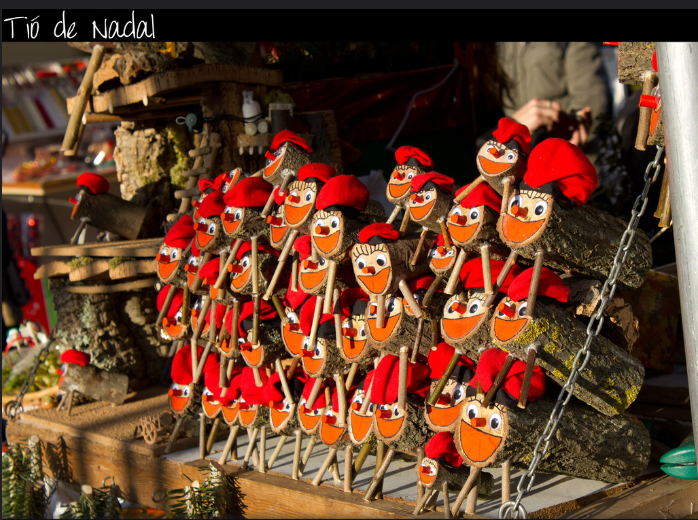 A current version of the tradition (doubtless there are many variations) is to bring your Tió into the house early in Advent, and fondly swathe him in a warm blanket. The children of the household “feed” him daily, till Christmas Eve or Day. At the appointed time, the family encircle the Tió armed with small sticks. He is then beaten, while all sing “Caga tió! Caga torró, avellanes i mató, si no cagues bé et daré un cop de bastó. caga tió!” Our natural delicacy suggests a translation along the lines of:  “Poop log! Poop torró, hazelnuts and mató. If you don’t poop well, I’ll hit you with a stick, poop log!”  [Torró d’Agramunt is considered a fine example of the Catalan version of the honey and nut Christmas sweetmeat known in other parts of Spain as turrón. Mató is a fresh milk cheese (made without salt) traditionally served topped with honey or jam.]
After this, the youngest child is encouraged to put his or her hand under the blanket and pull out the first thing he touches …. and wow! a small bag of sweets or nuts is extracted. Song is repeated, next child fishes under the blanket … and yes! more yummies are pulled out!! And so on up and down the ages present – or round and round the youngest – till there is nothing more to be found.  The Tió de Nadal  is not the only scatological dimension to a Catalan Christmas, their Nativity scenes usually include a little figurine called “el caganer”  – traditionally also wearing the Catalan bonnet like the Tió.  Clearly here is a mentality proud to be distinctive …

The BBC News pages have a profile of the Autonomous Community if, like us, you are a bit vague about the history behind this independence movement. Also available free online (and in English) is a 2003 article by Josep Desquens “Europe’s Stateless Nations in the Era of Globalization: The Case for Catalonia’s Secession from Spain” (Bologna Centre Journal of International Affairs, John Hopkins University)

As far as the national law is concerned, the Spanish Tribunal Constitucional  decided on the limits of the Catalonia’s power to set the pace by means of a public referendum following on from its  Declaration of Sovereignty and Right to Decide of the

People of Catalonia. The court has made an unofficial English translation of its judgment freely available.  Many Catalans  voted in the subsequent plebiscite : 80% of those that did make the symbolic vote were in favour of Catalan independence.

The case of Catalonia (and closer to home, Scotland) has brought to the forefront again the classic public international law questions relating to the formation of  new nation states. How should the modern world define – for example – referenda, sovereignty, self-determination, ethnographic peoples, secession, recognition? What now of the “manifest and continued abuse of sovereign power to the detriment of a section of population” requirement in the Aaland Islands Case (1920) L.N.O.J. Spec. Supp. No. 3.)?

Holders of an Oxford SSO can read this online

But remember a SOLO search will winkle out those titles which straddle law/politics/international relations which may not be on our shelves but in other  parts of the Bodleian. For instance our good neighbour, the Bodleian Social Science Library, has  Power politics and state formation in the twentieth century : the dynamics of recognition

Finally don’t forget there are useful free libraries online – such as the UN’s Audiovisual Library Under the section called States it offers free online lectures on Recognition,Self-Determination, and Sovereignty among others. More are in the pipeline.