That’s Merry Christmas in Hindi, one of over 300 languages and dialects spoken in India. The principal
religions amongst the population are Hinduism and Islam, but India is also home to around 25 million
Christians, who celebrate Jesus’ birth with a blend of both Western and traditional regional customs. Many Catholics attend Midnight Mass in churches decorated with poinsettias, after which families hold feasts, usually with Indian dishes. For some Indian Catholics, this marks the end of the fast they have been observing during Advent. 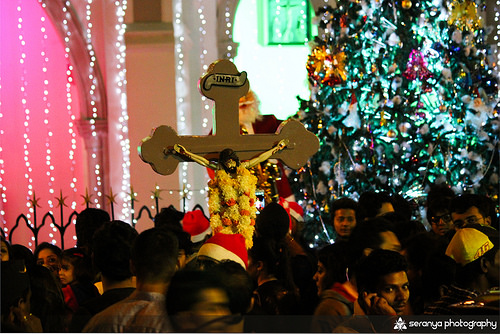 An Indian Church at Christmas

Throughout the country, Christian households display manger scenes in their front windows; and in Mumbai, paper lanterns representing the Star of Bethlehem are hung between houses to illuminate the streets. There are carol services, and people decorate Christmas trees; usually banana, mango or southeast Asian pine trees. In Southern India, worshippers put clay oil-burning lamps on their roofs, to
symbolize Jesus as the light of the world: a mixture of Christmas and Diwali traditions. Meanwhile, in northern India, the Bhil people spend Christmas week travelling to nearby villages to sing their own traditional carols and spread the nativity story. 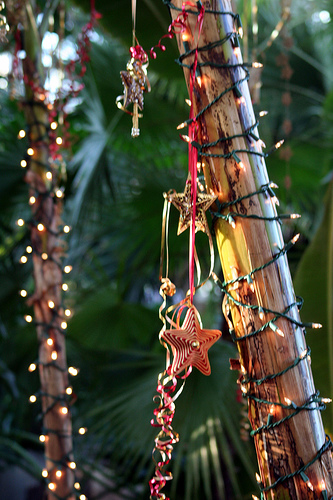 The widespread, more secular “Badaa Din” (“Big Day”) celebrations, especially popular in large towns and cities, have a clear U.S. influence. Market traders fill their stalls with Christmas decorations, and adverts for luxury products flood TV and radio. Badaa Din is a national holiday, when people visit relatives and exchange gifts; there is no tradition of children being told that the presents came from Santa, although he has started visiting Indian department stores. There’s also plenty of festive goodwill, with people sharing cakes and sweets with their neighbours; and this is seen as a good time to give charity to the poor.

Like its Christmas traditions, Indian law reflects its history as a nation forged from diverse countries and regions, its blend of cultural influences, and its status as growing world economic power. Our collection can be found on the first floor, shelved under “Cw India”; recent additions include: