Where can I find …

Jean Monnet’s speeches at the inauguration of the European Coal and Steel Community High Authority in August 1952, Luxembourg … or … a 2010 EU study of gender differences in educational outcomes … or …a 1976 study on the mobility of performing artists within the European Community?

At one time, you would have had to visit a European Documentation Centre (EDC). The Bodleian Library has been a European Documentation Centre (EDC) since 1963.  EDC status means that we receive one copy of every publication printed by the Publications Office of the European Union (the Publications Office).  There was a time in the 1980s when these printed publications seemed to arrive in EDCs by the truckload, but since the development of the internet, the European Union (EU), in common with many other bodies, has shifted its focus from paper to online publication.

EDC collections are fascinating.  The Publications Office has always printed a vast number of studies, reports, serials, current awareness newsletters, pamphlets and brochures on a wide range of subjects. The Office now manages online services that make available all sorts of information, from EUR-Lex, which offers the primary access point for EU law, to EU Bookshop, which is an online library of publications from the institutions and other bodies of the European Union.

The origins of the Publications Office lie in the early 1950s, when it started out as the Publications Service of the European Coal and Steel Community. Over the years, it accumulated a vast archive of over 60 years of publications. This vast treasure trove has now been digitized.

In 2009, the EU Bookshop Digital Library, containing 12 million scanned pages from more than 110 000 EU publications was launched at the Frankfurt Book Fair. So far, so good, but if you didn’t know about EU Bookshop, you were unlikely to find this valuable online material. Furthermore, EU Bookshop’s search mechanisms are not the same as the search and discovery tools that academics are accustomed to from their own libraries … which is where the British Library comes in.

So now there is a choice: if you are searching for digitized EU publications, you can use EU Bookshop or the British Library catalogue. It still isn’t always completely plain sailing: you may find more than one entry in the catalogue, because the British Library may have its own hard copy, so look out for the magic letters ‘OPOCE’ in the record to find the digital copy quickly.  Also, there are times when it turns out the EU Bookshop only has metadata for an item.

You will know that you have struck gold when clicking ‘I want this’ gives you the option to view a European Union document online … and you then see the Download option in EU Bookshop, as shown in the two screen shots below (click on the images to enlarge them). 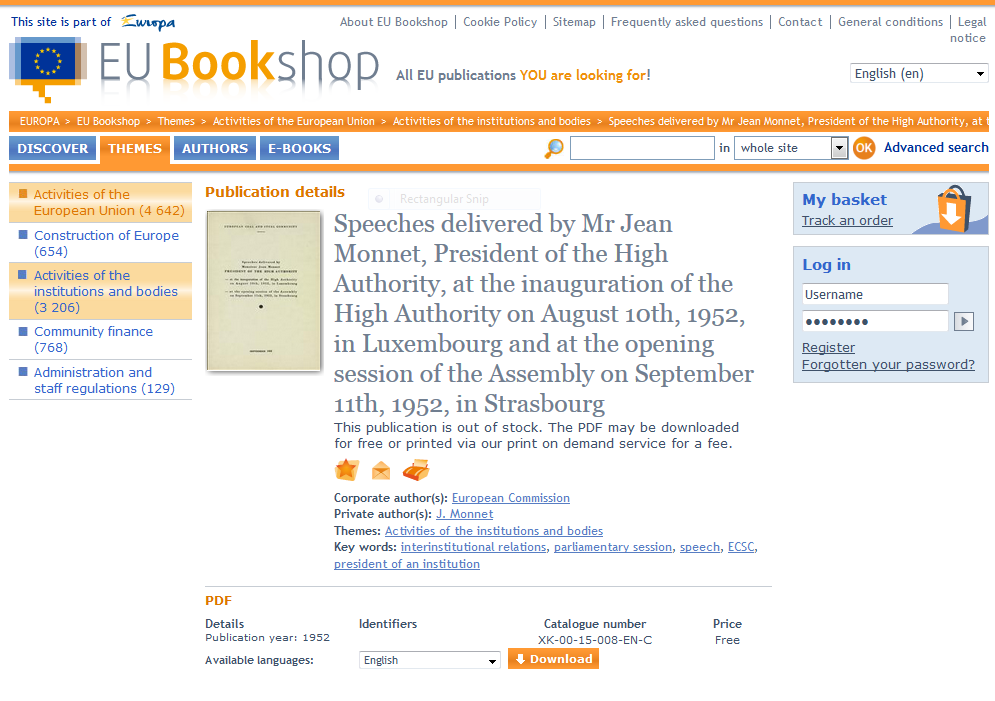