Have yourself a merry little Christmas, let your heart be light, from now on your troubles will be out of sight

This wonderful Christmas classic was debuted by Judy Garland in Meet Me in St Louis.  Fans of the song may be interested to know that the lyrics were changed a few times over the years in order to make them more positive (the original talked of living in the past, and Christmas’s being the last, not really what you want during the season of good cheer!).

The film itself is not about Christmas but about the characters’ lives around the build up to the World Fair of 1904 held in St Louis.

The World Fair in 1904 was reportedly an extravagant affair which included both innovations and exhibitions as well as popular culture of its time.  Of course in this day and age ‘showing’ anything off, whether it is your brand new technique to prevent wrinkles or an exhibition of a nation’s culture is much easier because of the advance of technology.  The ease in which websites, YouTube films, Instagram accounts are set up and run means that worldwide audiences are there in an instant (and people do not need to travel to view).  However there is still an appetite for physical exhibitions, conferences and visits to museums and galleries, from Comic Con to Gardener’s World Live nothing beats being in a large room with like-minded people. 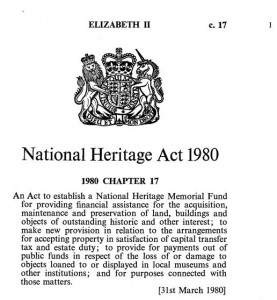 So now to the law.  It would be quite easy to go off down the road of health and safety, legal ramifications of ticket touting, or even link it to highways (given the chaos that calls itself the M40 when the Good Food show is on at the NEC).  However did you know that there is law specifically relating to national heritage, it’s display and the insurance (by the Government) if things go wrong? At The World Fair in 1904 it was rumoured that many of the international exhibitions were not returned to the country of origin after the fair but given to museums in the US.  Ownership of artefacts is never far away from the news, as those familiar with the Elgin Marbles and more recently the Koh-i-Noor diamond know.   This is unlikely to happen to things ‘lent’ or ‘given’ today but in the UK it is covered by National Heritage Act 1980 which includes sections that provide indemnities by the government for items on loan and the Museum and Galleries Act 1992 which has a section on loans and sales.  If you want to know more about this then you can always turn to Halsbury’s Laws for a good introduction to the law.  Halsbury’s Laws is available in hard copy in the Bodleian Law Library or online if you have a subscription to Lexis Library.  Volume 77 of the encyclopaedia deals with national cultural heritage including museums and exhibitions.

If that talk inspires you, then take a look at some of the exhibitions that are on at the Bodleian Library or if you want to look further afield then here is a list of World Fairs.