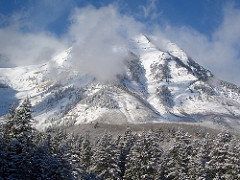 Mt Timpanogos seen from ski lift By tobym. Reproduced under CC licence
A view from the lift

British audiences may not have been aware of a particular significance this film had for American audiences. At surface level, especially if you are not giving it your full attention, there is not much to distinguish it from a lot of feel good,  rom-com/mistaken identity “happy ever afters” which can be provide suitable seasonable wallpaper while you get on with the serious intellectual challenge of finding the end of that dratted sellotape…. (Unless that is you are a carnivore: see clip on YouTube)
However,  inhabitants of a rather flat island may have been seduced by the scenery. The action takes place at a ski resort – the location used was The Sundance Resort in the Utah mountains “nestled at the base of 12,000-foot Mt. Timpanogos.”  Some may also have noticed & admired the paintings in some of the interior shots, works of Dan Lomahaftewa (1951-2005), a Hopi/Choctaw artist. (His Dream of Ancient Life, 1995  was exhibited at the Peabody Essex Museum) This is not coincidental to the story line … .
These are the clues why the late Robert Ebert called this film also “part historic breakthrough. The history is made because the movie is about affluent Native American yuppies. So many movies about American Indians deal in negative stereotypes that it’s nice to find one that takes place at an upscale Indian-owned ski resort. The only alcoholic in the cast is a white undercover investigator for a guide book.” The director, Kate Montgomery, allowed the Native Americans characters (played by Native American actors) to be just the stock characters of rom-com land: “It’s a comedy that knows that no matter one’s ethnicity, human foibles, follies and hopes are universal.”  in the words of Carrie Rickey of the Philadelphia Inquirer. (This and other reviews (professional & amateur), good & bad available.) The writer director Kate Montgomery just “wanted to create something that was just light and fun, and really celebrated the great sense of humor that is really central in the Native community.”
The destructive legacies of conquest/domination on indigenous peoples & their cultures are legion and complex – so any stepping stones on the path to justice & equality must be celebrated, even if they are an unexpected shape and form!
As it happens, the American Law Institute has just begun to turn its attention to the existing law relating to the Indian Nations of America. This project will cover “the foundational principles of American Indian law. Comprehensive in scope, it provides descriptions of fundamental terms and addresses Indian statutes and treaties, tribal governance, the federal–tribal relationship, and Congressional powers over Indian affairs.” 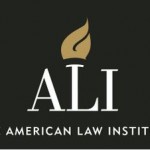 In April 2015, Tentative Draft No 1  on Chapter 1, Federal–Tribal Relations in the Restatement of the Law: Law of American Indians.  The Law Bod has a comprehensive paper collection of ALI Restatement publications, including a copy of this Draft, at USA 045. Holders of an Oxford Single Sign On can consult most parts of the Restatement of the Law via WestlawNext, the new name of the US law platform available since November 2015 via our Westlaw UK subscription – but not the ALI work on Indian Law yet.
Meg Kribble’s introduction to the value of the Restatement as a tool when studying US law from Harvard Law School Library. This project should produce a distillation of the existing law.
Organizations such as  American Indian Law Alliance  & the Indigenous Law Institute  (to name just two) work to ensure that indigenous voices can speak up about  the existing laws have affected their lives, so that listening lawgivers and makers might effect changes in the future where necessary. 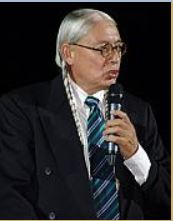 There must be plenty of individual voices too -holders of an Oxford Single Sign On may like to read the 2010 work by attorney Walter R. Echo-Hawk (Pawnee) In the courts of the conqueror : the 10 worst Indian law cases ever decided
Holders of an OSSO wanting to go to the reports of these cases have a number of electronic tools at their disposal. For a generalised search (ie when not working from a known citation), WestlawNext allows you to select Tribal Law as a search filter (with or without Federal cases).
For anyone interested in researching this aspect of US law, the website of The National Indian Law Library should become a favourite/bookmark, as it includes research guides on topics as various as water rights & prisoner issues, while also being a portal to other key websites.