“Do you know the butchers in the next street but one?”

“Good.  Intelligent boy.  Remarkable boy!  Tell me, have they sold the prize turkey that was hanging there, not the little turkey, the big one?”

“Is it? Very well, then, go and buy it… Tell the butcher to bring it here.”

The 1951 film starring Alastair Sim is my favourite adaptation of A Christmas Carol.  But I have often watched this scene and wondered how easy it would really be for the reformed Ebenezer to buy a huge turkey at the last minute.  These days he certainly wouldn’t be able to pop out to a nearby superstore, as opening hours of large stores in England are governed by the Christmas Day (Trading) Act 2004.  This states, “A large shop must not be open on Christmas Day for the serving of retail customers”, where large means any shop with over 280 square metres of floor space.  Smaller shops are not subject to this legislation, so today Scrooge might still be able to find the makings of a festive bacon sandwich at his local corner shop.  (And so a small butcher’s shop could theoretically be open on Christmas morning.)

The background to the 2004 act can be traced by looking at Hansard online.  The term ‘Christmas Day trading’ brings up not only the parliamentary debates about the bill in 2004, but also the research briefings published beforehand.  Before the act was passed, trading was only restricted if Christmas Day fell on a Sunday, in which case it was subject to the Sunday Trading Act 1994.  The unions were concerned that shopworkers were being asked to work on Christmas Day and lobbied to keep the day ‘special’.   More recently, a research paper by the House of Commons library on the possibility of updating the Sunday trading law, with all its quirks, reveals that the government has no plans to amend the Christmas Day legislation.  As always, it’s worth checking our catalogue as well as the online resources, as the Law Library also has a consultation paper on this topic published by the Department of Trade and Industry in 2003.

Incidentally, if Alastair Sim were in his native Scotland now, he would find the larger shops closed, under the Christmas Day and New Year’s Day Trading (Scotland) Act 2007, even though there is no comparable legislation there to restrict Sunday trading.

But what would the law have been on the morning in Victorian England when Scrooge leant out of his window?  A Christmas Carol was published in 1843, and that year Christmas fell on a Monday.  The Chronological Table and Index of the Statutes (for these purposes, the 15th edition which covers statutes between 1235 and 1899) provides a useful index of legislation in force, while Justis will provide the full text online.  The 19th century saw a flurry of Sunday observance legislation limiting public entertainment, drinking, work, sport, railway travel and more, leading one commentator to describe the Victorian Sunday as “the last word in dullness”.  Although established under common law as a public holiday in England, Christmas Day does not seem to have been explicitly subject to all the same restrictions.  The index shows that by the mid-1800’s, pawnbrokers, public houses, and billiards houses were all forbidden from opening on Christmas Day, but not shops.

Scrooge could not legally have gone out to kill his own lunch, as the Game Act, 1831 prohibits the killing of any game on Christmas Day.  In the days before home refrigerators, it would make sense to leave buying a turkey to the last minute.  Justis gives another clue – a search for ‘butchers Christmas’ shows that at the time of the Retail Meat Dealers’ Shops (Sunday Closing) Act, 1936, Christmas Day is specifically excluded from the usual Sunday restrictions on butchers delivering meat to customers.  Although nearly a century later, this suggests that at one point it would have been perfectly reasonable to expect a delivery from the butcher on Christmas Day.  In which case, Bob Cratchit could very well have received a huge turkey on Christmas morning, 1843.  Now that’s a happy ending.

And so, as Tiny Tim observed, God bless Us, Every One! 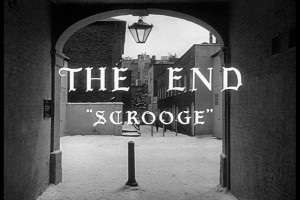