The fun & high jinks of The Muppet Christmas Carol movie do not entirely hide the fact that the story raises a range of important social & legal issues.

From the very outset, the opening sequence reveals a snowy city setting and quickly the viewer is alerted to the atrocious working conditions of those poor, frozen Muppet book-keepers. They are not even allowed to add any fuel to the stove. This – we feel confident in asserting – cannot have been due to their employer, Scrooge, being a scrupulous adherent of any clean air legislation! Dickens wrote his story ten years before London should have benefitted from the innovatory  Smoke Nuisance Abatement (Metropolis) Act of 1853. Under this piece of legislation, the Home Office was to appoint an inspector, who, in consultation with the metropolitan police, had to control the nuisance of smoke from both furnaces in the city & steam boats on the Thames. It is not clear how successful this initial step was, but it did mark a beginning.
In fact, it’s very clear that Scrooge is bullying his staff to such an extent that Kermit, an employee of lengthy service, is fearful to even ask for leave.  If only there had been something like ACAS to turn to! 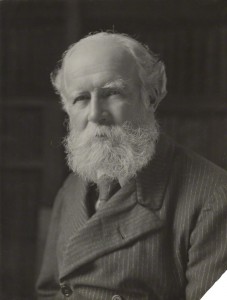 Until the nineteenth century, the common law recognised just two days in the year as holidays – Christmas Day & Good Friday – so employees would have had little support there in arguments with hard-hearted employers. Nor did this holiday status mean Christmas was entirely without care – 25 December was by long tradition also a Quarter Day: there could have been a demand for the rent, not everything could go on food and presents. Well might Scrooge exclaim the season was really “Harvest time for the money-lenders.” Our unhappy frog hero lived just before legislation added the concept of statutory holidays.The man behind this great innovation was … a banker.  The Bank Holiday Act 1871 named three Mondays (Easter, Whitsun & the first in August) and Boxing Day – but only when the last fell on a weekday. Looking at the photo of said banker is his later years, we cannot help thinking that he looks familiar… something about the impressive snow white whiskers? 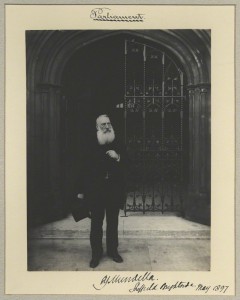 As an adult male worker in clerical/white collar employment, Bob Cratchit – Kermit, would not be among the first beneficiaries of legislative help: the plight of women and children were the first to touch the conscience of the nation, then the more obvious massed ranks of the factory and industrial workers. As part of a post extolling the virtues of the Christmas spirit, it can be noted that, with hindsight at least, 1824-1856 was a fertile period for the growth voluntary conciliation & arbitration between master & operative. (As evidenced by the Select Committee Report on Equitable Councils 1856.) We are delighted to report that the early champions of arbitration sound as though they could have been a partnership from the pages of a novel: Kettle & Mundella. (Rupert Kettle (1817–1894) & Anthony John Mundella (1825–1897)) Both gentlemen also seem to have reasonable Father Christmas potential too – at least if Sir Rupert were to age a bit more & Mundella consider a fat suit in the spirit of Christmas. 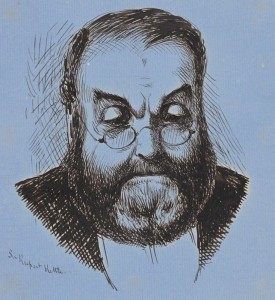 Dickens seems to have been inspired to write the Christmas Carol as part of one of his dearly held personal campaigns: to improve the lot of the children of the poor. At first he had thought of producing a political pamphlet, but then decided that a parliamentary report would have such an impact that he could divert his powers from a political pamphlet into another form. It was the Second Report of the Children’s Employment Commission (published February 1843) which had so impressed him: it would be, he said,  like  “a Sledge hammer … with twenty times the force—twenty thousand times the force—I could exert by following out my first idea.” Our nearest neighbour, the Bodleian Official Papers, have volumes of the report itself – and I can attest to their massive weight –  while holders of an Oxford Single Sign On can read it via the House of Commons Parliamentary Papers database. The Appendix volumes record the evidence taken from masters, teachers, parents and – most heartbreakingly of all – the children in the system.

So Dickens decided to further assault the conscience (and fear) of a wider section of the public through the force of his imagination: Christmas Present dramatically reveals two children, “Yellow, meagre, ragged, scowling, wolfish; but prostrate, too, in their humility … a stale and shrivelled hand, like that of age, had pinched, and twisted 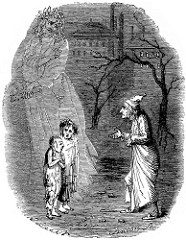 them, and pulled them into shred “This boy is Ignorance. This girl is Want. Beware them both, and all of their degree, but most of all beware this boy, for on his brow I see that written which is Doom, unless the writing be erased.” Works on Dickens as campaigner for reform include Sally Ledger’s Dickens and the popular radical imagination (CUP, 2007).  A copy of this volume is in the Bodleian English Faculty Library next door – where would interdisciplinary studies be without good neighbours??

But Dickens personally knew Bob Cratchit’s problem – he too had wife and children to feed, and not enough money coming in; he really did need to write a popular best-seller. And the sales of the first print run were fantastic –  in fact a bit too good. A pirated version appeared little more than a month later: Parley’s Illuminated Library printed for the delight of its readers “A ghost story, reiterated and reconstructed from a Christmas Carol in Prose, by Charles Dickens.” Worse still this rogue volume was priced at only 2d, when the real work was 5/-.(Purchasers of the cheap version in fact only got two-thirds of the story for their outlay – but were promised a continuation.) Dickens had recourse to the courts.

Holders of an Oxford Single Sign On can discover his progress as reported in the contemporary newspapers . Via the database British Newspapers 1600-1950  there is for example the The Standard (London) reporting on Friday 12 January 1844 the argument in the Vice-Chancellor’s Court the previous day, when Dickens was successful in getting an injunction.  (Dickens v Berger, v Clark, v Strange & v Cleave). Whereas via The Times Digital Archive it is possible to get some flavour of the defendants’ arguments in trying (unsuccessfully) to get the injunction dissolved. (See the issue for Friday, 19 January 1844) Dickens had the satisfaction of having judgment in his favour. Unfortunately, the printers subsequently declared themselves bankrupt … leaving Dickens to pick up the costs. This is unlikely to have improved his opinion on the workings of either chancery or the contemporary legal system … Bleak House would appear some eight years later.

This makes us wonder if  Fozziwig and Mom Ltd. had taken out a patent to protect their wonderfully innovative idea – rubber chickens – for what still have been a very unusual material in mid-Victorian England? We could start by checking Woodcroft’s Patents of Invention: from March 2, 1617 (14 James I) to October 1, 1852 (16 Victoriae) (Queen’s Printing Office, 1854-1855) which has Index of patentees & applicants, and an Index of inventions …