Not one but two reasons why law students really should get away from their books – or small screens –  & into the cinemas for some legal education courtesy of the big screen. 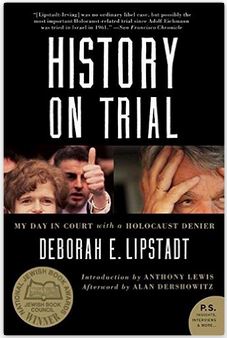 Denial (2016, Mick Jackson & David Hare) is based on Deborah Lipstadt’s book History on Trial: My Day in Court with a Holocaust Denier (A copy is in the Law Bod at KB66.ENG.IRV 2006.) Her day came about in 2000 when she found herself in the Queen’s Bench Division of the High Court  as second defendant in the libel case, Irving v Penguin Books Ltd.  The defendants’ legal team had to produce such a strategy and argument that there could be no possibility that denial of historical facts could win. The film gives an excellent insight into the team work involving both lawyers (led by Richard Rampton QC,  Heather Rogers , &  Anthony Julius) and expert witnesses behind the successful establishment of justification – as then defined by s.5 Defamation Act 1952 c66.

This law librarian greatly appreciated the film – having her own routemaster moment as her attention was briefly fixated on the books (allegedly) in Mr Julius’s office, inwardly cheering the detail which showed the importance of having your court bundle duly tagged etc etc …. So perhaps make due allowances for her being a bit of a geek!

It is distressing that holocaust denial manages to continue – such is the curious world of alternative facts.

What nobody can deny is that the judgment handed down in the film is available via BAILII, Westlaw UK & LexisLibrary. (Mr Justice Gray had directed (pursuant to CPR Part 39 P.D. 6.1.)” that no official shorthand note shall be taken of this judgment” – suddenly a section of the film makes greater sense!) [2001] EWCA Civ 1197, the official transcript of the refusal of a subsequent request for permission to appeal is also available on BAILII & the subscription databases above.

For all would-be libel lawyers, please note the subsequent passing of the Defamation Act 2013 c 26. Para 17 of the Explanatory notes say that sub-ss 2(2) & (3) replace the s 5 of the older act – but are intended to have the same effect.
Read about the current law in Duncan and Neill on defamation KN38.2.DUN 2015 (online via LexisLibrary) two of the heroes of the hour – barristers Rampton & Rogers are among the names behind this current edition! or Gatley on Libel and Slander  KN38.2.GAT 2013 (online Westlaw UK) or Collins on defamation KN38.2.COL 2014. What am I saying “or” “or” “or”?!? – one of the clearest lessons of Denial is the importance of thorough, painstacking, preparation: for or read and. Then you will have begun…

Anthony Julius has since written a work related to the case Trials of the Diaspora: A History of Anti-Semitism in England (2010). Copies of this are in the Bodleian History Faculty Library or can be Requested from the Closed Stack (how to guide here) to be read in the Law Bod.

Sir Charles Gray (as he had become by 2011) can be heard in the role of witness to the BBC’s PM Privacy Commission Day 3 (For other sessions & final report, see index page)

The second film is not something I have seen yet – but the reviews suggest it warrants direct research!

Loving (2016, Jeff Nichols) is about the back story to the US case Loving v. Commonwealth of Virginia, 388 U.S. 1, 87 S.Ct. 1817, 18 L.Ed.2d 1010 (1967). (Holders of an Oxford SSO can also get US case law via Fastcase, the International Materials collection of Westlaw UK (remember to click Services first to get the right search screens) and LexisLibrary (International Cases are a link on the Case search screen – change drop down menu).)

The US Supreme Court had to consider whether a statutory scheme adopted by the State of Virginia to prevent marriages between persons solely on the basis of racial classifications [miscegenation] violated the Equal Protection and Due Process Clauses of the Fourteenth Amendment.

Between us, the Bodleian Libraries can provide the curious with over 50 books with Fourteenth Amendment in their title – before turning to those less specific but still on the United States Constitution or the history of race relations. Not all will necessarily deal at length with this particular case … but I know it is at least mentioned in Michael J. Perry’s We the people : the Fourteenth Amendment and the Supreme Court (Bodleian Law Library     USA 510 P463.5d  or Social Science Library   KF4558.PER or Vere Harmsworth Library     KF 4558 14th .P47 1999)(I cheated a bit &  searched the online version! Remote access requires logging in) 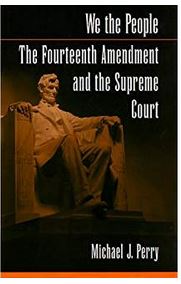