Let’s start with a game for 3 to 4 year olds – and doting older relatives, happy for an excuse to sit comfortably and engage in minimal mental activity for the writer knows into which category she falls!

The object of  this Don’t break the ice is to help Phillip the Penguin chop out blocks of ice so that he can build himself a new igloo.

(How Philip’s relatives had managed to hide this remarkable activity from the BBC Frozen Planet team was initially confounding,  but having done a mental review of all that Happy Feet & Madagascar franchises had taught me, I know there is a lot more to penguins than they ever let on to documentary makers.)
The problem is that your effort to chop a new block of ice may cause poor Phillip to fall … in which case you lose.

Penguins certainly have a good PR team working for them – and it is probably just as well for the polar regions seem to be particularly under stress. 2017 was a terrible breeding season for the Adelie penguin – as reported in an article in The Telegraph of 27 October 2017 the 18,000 strong colony in one part of the Antarctic had only managed to raise 2 chicks.

The impact of the breaking up & melting of the ice sheets may have been a contributory factor in this population crash. NASA’s operation IceBridge  & its 9th Antarctic mapping project should provide solid data. The CCAMLR or Commission for the Conservation of Antarctic Marine Living Resources (established under Convention) is charged with looking after “all Antarctic populations of finfish, molluscs, crustacean and sea birds” – “to  protect  core  foraging  areas  for  land-based top  predators  or  those  that  may  experience direct trophic competition from fisheries” (If concerned, remember whales and seals are the subject of distinct conventions.) Under the CCAMLR some international  agreements have already been reached giving some areas special protection, such as the Ross Sea Region Marine Protection Area let us hope more will follow.

But the breaking news about ice – or the lack of it – relates to the North Pole, thousands of miles from any penguin’s igloo, but closer to Father Christmas’s! 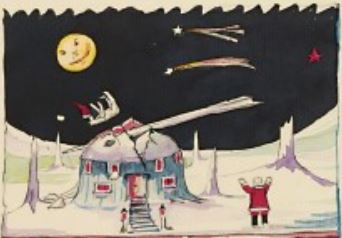 Changes in the quality & permanence of the ice sheets in the Arctic has meant the opening of an enticing “donut hole”- over a million square-miles of “new” water outside any national jurisdiction, so potentially open to a free-for-all exploitation. However a draft Agreement to Prevent Unregulated High Seas Fisheries in the Central Arctic Ocean has just been concluded by Canada, Denmark (Greenland and the Faroe Islands),Norway, Russia, USA & the Inuit Circumpolar Council together with the major arctic fishing entities – Iceland, Japan, South Korea, China and the EU. It could usher in a 16 year moratorium on fishing. But lawyers know that this is but the first step – “Before the Agreement will be open for signature, the delegations must first undertake a legal and technical review of its provisions, which will occur in the near future, and prepare the texts in the other languages in which it will be signed. During that time, delegations will also seek final approval within their respective governments to sign the Agreement.” The Chairman’s statement dated 30 November 2017 is rather an ice-bucket of legal realism. But we can all hope that there will be no slip ups in the progress towards this agreement entering into force…