Scotland Yard, the headquarters of the Metropolitan Police Service (Or Met), the territorial police force responsible for policing most of London OR a game where players must try and catch a criminal stalking the streets of London by ‘landing’ on them. 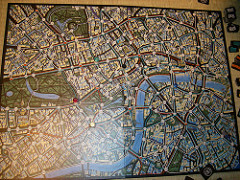 The game revolves around most of the players trying to travel around London using taxis, buses and underground tickets and trying to land on the same ‘space’ as the player who has been designated ‘the criminal’ or ‘Mr X’.  Catch is that the Mr X only has to show where he/she is every 5th go.  Players also have a limited number of ‘tickets’ for each method of transport whereas the criminal has their own tickets as well as any used by other players (crime definitely paying in this instance).

It all makes for quite an exciting (or stressful) game and it would be quite easy to link the game to wealth of criminal law resources we have.  However this Christmas blog shies away from the obvious and so we are going to look at taxis or more specifically Uber (which may or may not be considered a taxi).

One of the methods of transport in the game and in real life you need to be a bit more careful with (fewer tickets/more expensive) are taxis.  One may even be tempted to give Uber a call to save money.  However not everyone is happy with Uber, since its introduction in the UK there have been a number of legal challenges on various issues.

For those interested, the licencing and regulation of private hire vehicles and operators and drivers within the City of London is governed by the Private Hire Vehicles (London) Act 1998.  Transport for London is the licensing authority (under the act) and they have the power to prescribe further requirements through regulations (s.32).  An abstract of current legal requirements for drivers and operators can be found on TfL’s website but as the documents suggest you need to look at the legislation itself for the law.  The best place to look for legislation is one of the major UK databases (Westlaw or Lexis Library) as it will have the legislation as amended and as up to date as it can be.