Cards against Humanity, a relatively new game that we were not over familiar with, but it was one that featured in the top ten and so we felt obliged to do some research. 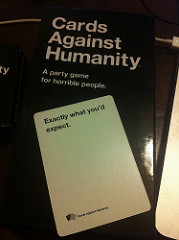 Cards against humanity by justgrimes reproduced under Creative Commons licence

The game revolves around getting people to come up with the most offensive things to say depending on the cards that they have.  It sort of acts as a legitimate way of being politically incorrect with the excuse that you are just reading what is said on the card.  Possibly not to everyone’s tastes in fact there has been some push back from various critics, but it seems like it is popular.

So where can we go with this without digging ourselves into all sorts of offensive holes.  Quite possibly the obvious choice would be looking at resources around the freedom of speech or freedom of expression (not that the two are exactly interchangeable).

For those that are hosting  a Christmas/Holiday get-together in the next 2 weeks it is the sort of topic that can either spark a healthy and robust debate or cause a minor war to break out in your household with Aunty Peggy refusing to speak (or more importantly to pass the cranberry sauce).

There are so many resources on freedom of speech (SOLO alone comes back with 910 hits) it would be hard to mention more than a handful.  One good place to start in order to bring calm and reason would be Barendt, Freedom of Speech (OUP 2019) (available as an eresource to OU Members).  You could also take a look at Human Rights Watch’s page on free speech.

Of course with rights come responsibilities and there are some caveats to most of the legislation around this issue (clear and present danger in the US for example).  We will leave the debate with you (and Aunty Peggy) as you grapple with issues around censorship and other such minefields.

* This is often attributed to Voltaire and there are some conflicting accounts of the exact wording.