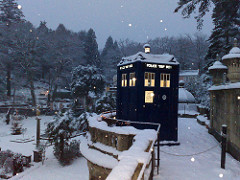 The Christmas Invasion, which was David Tennant’s first full episode as the infamous two-hearted Time Lord in 2005, was the first Christmas Special in its, then, 42-year history. Now, 13 years on and four regenerations later, it has become a tradition for the TARDIS to be beamed into our living rooms every year on Christmas day so we can witness the Doctor exchanging witty banter with festive foes from all across the galaxy.

During this episode, the Doctor manages to fight off some robotic santas wielding deadly trumpets and killer Christmas trees, as well as an entire alien race (the Sycorax), all while barely conscious as he is still partially through his regeneration from his ninth incarnation (played by Christopher Eccleston). Pretty impressive, eh? While we can draw themes of the importance of team work and family from this episode, here at the Law Bod we’re sure the writers were also commenting on the legal issues surrounding Artificial Intelligence (AI) through the motif of robotic santas and weaponised Christmas trees. 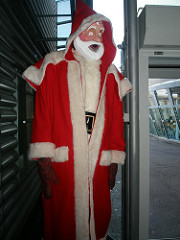 2. Looking at this guy, we’re pretty glad the Law Bod doesn’t have a chimney, if we’re honest!

Not sure you would have the knowledge to take down these santas without the use of a sonic screwdriver? No fear! The Law Bod will be your companion on this journey to AI enlightenment. AI is a hot topic in all areas of Law with many decisions and processes being handed off to an artificial being to save time, energy and money. However, with this comes challenges! For example, liability for mistakes made by AI needs to be established, a debate needs to be had on the ethics around the accumulation and retention of data and the possibilities for misuse must be explored (ahem, misuse such as robotic santas). Additionally, given the UK’s Common Law system which is based on precedent, the development of the AI industry is so rapid that there really is no precedent for the legal issues arising. Therefore, we are voyaging into unknown legal territory as new technologies are being developed.

Wanting more tips for getting control of our computer companions and find the answers you’re looking for? Whether you are a new undergraduate for which SOLO is a foreign planet or an Oxford University veteran who was most familiar with the old interface, read our LibGuide for the most efficient way to navigate and get the most out of our recently updated online catalogue system.

Additionally, if you wish to learn more about AI, whether it is to fend off robotic enemies, impress your tutors, or get a head start on an area of legal research that we’re sure is going to blow up over the next few decades, then you can use your new research skills from our LibGuide and find many titles on SOLO relating to the physical and electronic items we hold. You can read about the use of AI in Law in Joanna Goodman’s Robots in Law: How Artificial Intelligence is Transforming Legal Services (London: Ark Group, 2016) at shelf mark: KL96.2.GOO 2016 on Level 2, and further articles on the history and advancement of AI can be found in AI Magazine which you can access online through SOLO. If books and online journals are not technologically advanced enough for you, the University of Oxford has also been doing some pioneering research into AI with particular focus on its use in healthcare, which you can learn more about here!

We have now discovered, despite what Doctor Who is insinuating, AI is not intended for malicious razor-rotating Christmas trees which are there to threaten your life, but instead it could be saving your life in a future close enough that you don’t even need a TARDIS to time travel there! Here’s hoping for a future with more robots like Wall-e and R2D2 and a lot less like HAL or Robot santas…

Merry Christmas to all our readers, and be sure to keep a watchful eye on your Christmas trees over the next few weeks for any suspicious activity…