Being old enough to remember when Hart Publishing was first established in Oxford (1996 – since 2013 it has been an imprint of Bloomsbury Publishing), it was (almost) natural that the line about the deer in the carol The Holly and Ivy, would make me think of that publisher’s logo. Surely this must make a deer the most welcome and visible four-legged fauna on our shelves? Dedicated users of the Bodleian Libraries online catalogue will know that we are ringing out the “classic” interface this December, in favour of a new and improved version. Using its Advanced Search screen  , and limiting the Search Scope to just Bodleian Law Library, before asking it to search for Hart as Publisher And Place of Publication as Oxford, revealed that there must be in fact over 1,300 stags on our shelves! 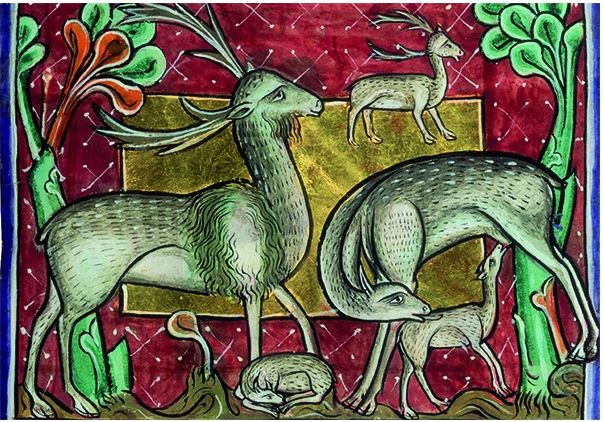 As chance would have it, one of the Christmas cards the Bodleian has been selling this year has been a medieval illustration of the
“legendary goat stag” from a Latin Bestiary made in southern England, c. 1225-1250. Many of you will now be recalling your Aeschylus, Artistophanes, and Aristotle – but I’m afraid this writer is still in the thicket of legal history: in the Latin text of medieval charters you encounter references to the “capriolus,” and in documents in Law French “cheverellus.” Clearly close to the Latin (caper) and French (chevre) for goat, these were often used to (male) roe deer. (Capreolus capreolus and in modern French, chevreuil)

The fate and legal status of the deer changed dramatically after 1066. The passion of the Norman kings for hunting led to “… the subjection of vast and growing tracts of forest land to an oppressive and deeply resented “forest law” protecting royal resources with ferocious penalties …” (John Baker, An Introduction to English Legal History (5th edn, OUP 2019) 15).  The Early English Laws website has a freely available overview of the Forest Law by Jane Winters  as well as a digital copy of the Assize of Woodstock 1184/5, also often referred to as Henry II’s Assize of the Forest most well-known iteration of the working of the system. Another site on the free web with a lot of interdisciplinary (legal and historical) insight is Forests and Chases of England and Wales c1000 – c 1850 (Maintained for Dr John Langton by Dr Graham Jones, St John’s College Research Centre, Oxford) The Internet Archive is a free (though registration required!) way to read an eighteenth century edition of Manwood’s Treatise of the Forest Laws – a book published in the reign of Elizabeth I, and subsequently much cited. Holders of an Oxford SSO, in addition, are able to consult online GJ Turner ed, Select Pleas of the Forest for detailed evidence of this legal system in action. (This is the Selden Society’s volume 13, consequently available via HeinOnline.) (It is interesting to note that the Norman Kings’ view – that they could create royal forests where they chose, and that their prerogative also included the ownership wild beasts – was only explicitly abolished in 1971, by the passing of the Wild Creatures and Forest Laws Act (c 47))

According to the OED, a medieval hunter would probably thought you meant a red deer stag if you referred to a hart. According to Manwood (whom modern critics don’t always think got it right!), “If the King or Queene doe hunt or chase him, and he escape away aliue, then …he is called a Hart Royall.” We would call him very lucky, and a hero – and hoped he would go on to father many fawns with the same combination of speed and cunning!