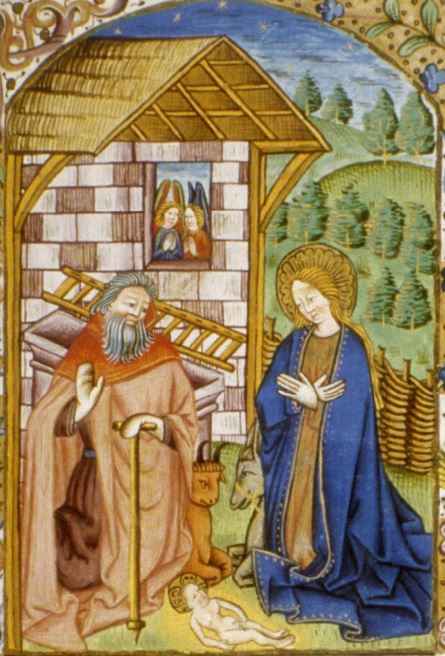 A brief thank you to St Francis of Assisi, as he is credited with having first thought of  bringing together the Gospel (Matthew and Luke) accounts of the infant Christ sleeping in a manager with Isaiah 1:3 “The ox knoweth his owner, and the ass his master’s crib” (KJV) to give us the Christmas navity image. Joseph and Mary needed temporary accommodation away from home, because “… in those those days, .. there went out a decree from Caesar Augustus, that all the world should be taxed. (Luke 2:1 KJV – more recent translations prefer registered/listed in a census)

Although the Law Library does indeed support modern tax law studies  I am staying with matters historical.

Another famous early tool for tax collecting purposes was the “liber iudicarius,” or Winchester Roll or the King’s Roll of 1086.

By c1170 contemporary – Norman – civil servants were aware that the indigenous – Anglo-Saxon- inhabitants were referring to it as “Domesdei” – and the Domesday Book it has remained.  (Dialogus de Sacarrio: Dialogue of the Exchequer 97. Holders of an Oxford SSO can read the Oxford Medieval Text edition by Emilie Amt and S. D. Church online Richard fitz Nigel, the author to whom this work is generally attributed had risen to high office in both church and state. But it is believed he may have been the illegitimate son of a Norman official and an English/Anglo-Saxon woman. Perhaps that is why he thought fit to include this linguistic aside.)

The Anglo-Saxon Chronicle vividly records how thorough the commission had been. In its entry for 1087 “There was no single hide nor a yard of land nor indeed was one ox or one cow or one pig left out, that was not put down in his [the King’s] record.” (emphasis added).  The hide was the standard unit of assessment used for tax purposes, and in theory was the amount of land which was required to support a household – about 120 acres. Another taxable land unit referred to throughout the Domesday Book is the plough(land). This was the amount of land which could be ploughed – with a team of eight oxen.

The unit of a half plough – curious though it sounds – was that worked by a team of four oxen. The illustration below is from a manuscript dating from the 11 or 12th centuries – the closest to a contemporary snapshot as we are likely to have.

The National Archives (aka Kew, old style PRO or Public Record Office) has an online Guide to The Domesday Book which links through to an online Exhibition Both these are free. So too are the websites Hull Domesday Project and Open Domesday In the latter you can see what was said about individual locations (Oxford then had a population of 18 households – with a mill and a church, but was also partially waste!)

For more on the Domesday Book and its legal history uses – not surprisingly important land law as well as tax! – the Law Bod can offer readers R Fleming, Domesday Book and the Law : Society and Legal Custom in Early Medieval England (Cambridge UP 1998) which is shelved at Legal Hist F598a

But what about the ass? According to Darby’s Domesday England  (Cambridge UP 1977 at p 164), only 62 were recorded in the Domesday book.  Even if we add in the 3 mules, they seem to have been the least common of the domesticated species. Donkeys “are not happy in a cold and wet climate” (Debby Banham, Rosamond Faith Anglo-Saxon Farms and Farming OUP 2014 at p 83) – a sentiment many of us share! – but back then their scarcity was probably evidence of their failure to thrive rather than precocious awareness of animal welfare.

There may not have been many donkeys at all in Domesday England, and the survey seems to have considered the human beadle a bit too lowly a parish police officer to bother mentioning much either. But there were beadles about then, and if there is a Beadle who is still alive in the public conscience it must be Charles Dickens’s Parish Beadle , Mr Bumble.

“It was all Mrs. Bumble. She would do it,” urged Mr. Bumble; first looking round, to ascertain that his partner had left the room.

That is no excuse,” returned Mr. Brownlow. “You were present on the occasion of the destruction of these trinkets, and, indeed, are the more guilty of the two, in the eye of the law; for the law supposes that your wife acts under your direction.”

“If the law supposes that,” said Mr. Bumble, squeezing his hat emphatically in both hands, “the law is a ass — a idiot. If that’s the eye of the law, the law is a bachelor; and the worst I wish the law is, that his eye may be opened by experience — by experience.” Oliver Twist (1838) ch. 51.

The suggestion that 19th century law unduly favoured the wife causes more hollow laughter than ever these days – now we know just how far Charles Dickens was tempted to  exploit the law in real life in his unhappy domestic relations. (As it is the season of goodwill, we will be charitable reminding ourselves that it is always so much harder to practise than to preach … .)

Law and Literature is a fascinating interdisciplinary subject (one of our former colleagues wrote a Libguide to help) with wonderful justification settling down to some solid novel reading over the holidays – and perhaps even watching some films.