2015 is the two hundredth anniversary of the famous political cartoon by James Gillray showing Napoleon and Pitt the Younger carving up the World.

The Map Department holds a number of examples of cartoon or satrical maps. Most are designed with a similar intention to the Gillray, that of educating and entertaining at the same time, the maps are based on geographical boundaries but usually have no other topographic features, and instead fill up spaces with figures. This example, from the start of the First World War, is one of the best of this type in the map collection. 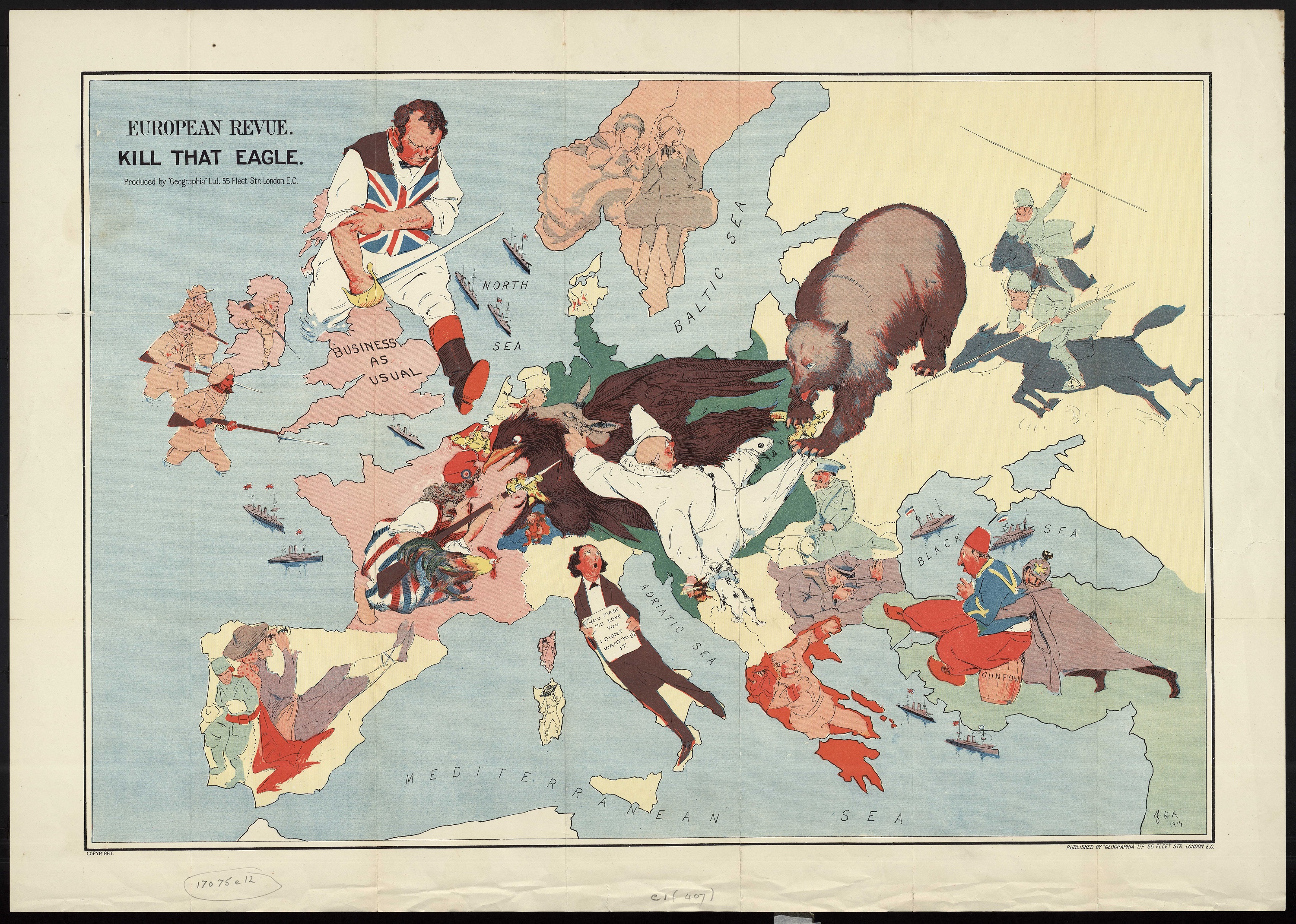 European Revue, Kill that Eagle, Published by Geographia in 1914 and drawn by J. Amshewitz. C1 (407)

Despite its initial appearances it has a serious message to convey. Germany looks towards France while Austria, dressed as a clown, clings on desperately while watching horrified as the brown bear of Russia grabs at ankles and talons. Britain prepares to stride across the channel to sort out the mess, ‘Business as usual’ with the Empire in support.

Another example is by the famous Victorian cartoonist Frederick Rose. 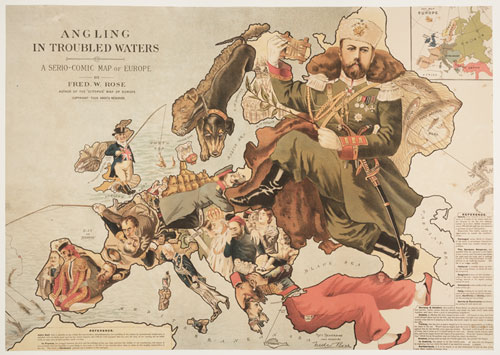 Angling in Troubled Waters shows the troubles caused by the expansionist ideas of the nations of Europe. All have either a fishing rod attached to territorial claims or are in some form of trouble; France fighting amongst itself after the Dreyfus affair, Austria in mourning after the assasination of the Empress Elizabeth in 1898. England, in the guise of John Bull, is the only nation happy with their lot, a common theme in these maps. Carrying a full net of territory Bull has just snagged Egypt on his line. Another famous cartoon map by Rose is ‘Octopus map of Europe’* from 1877, warning of growing Russian influence in Europe. 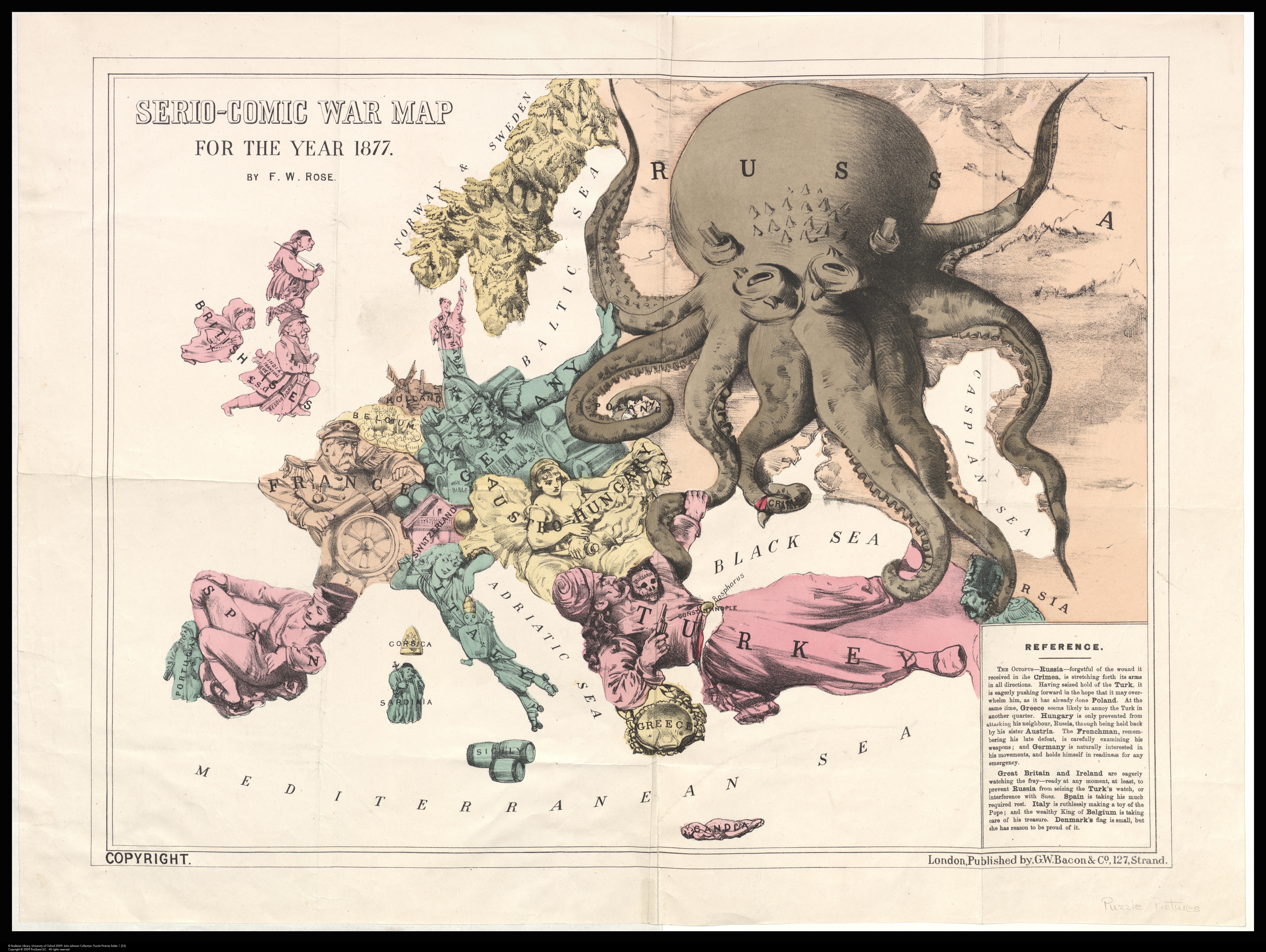 *The Octopus map of Europe’ by Frederick Rose comes from the Bodleian John Johnson collection, one of the largest and most important collections of printed ephemera in the world, including a number of other cartographic cartoons. This image is from from JJ puzzle pictures folder 1 [28]. information about the John Johnson collection can be found here http://www.bodleian.ox.ac.uk/johnson

Not all cartoon maps are intended for satire though. A book published in 1868 featured maps 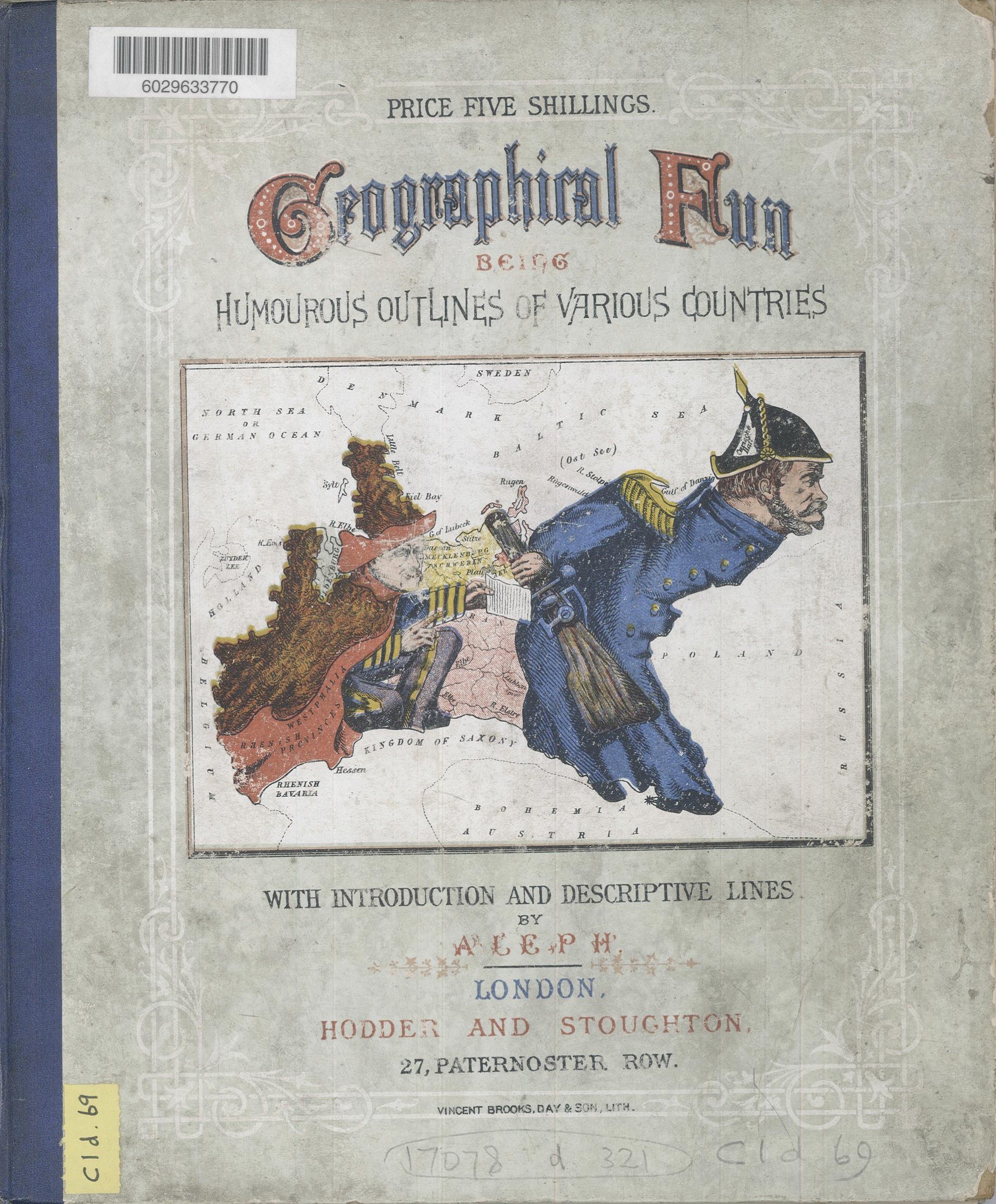 drawn by Lilian Lancaster when she was 15, to amuse her younger brother. The book features sketches of Countries according to their characteristics. 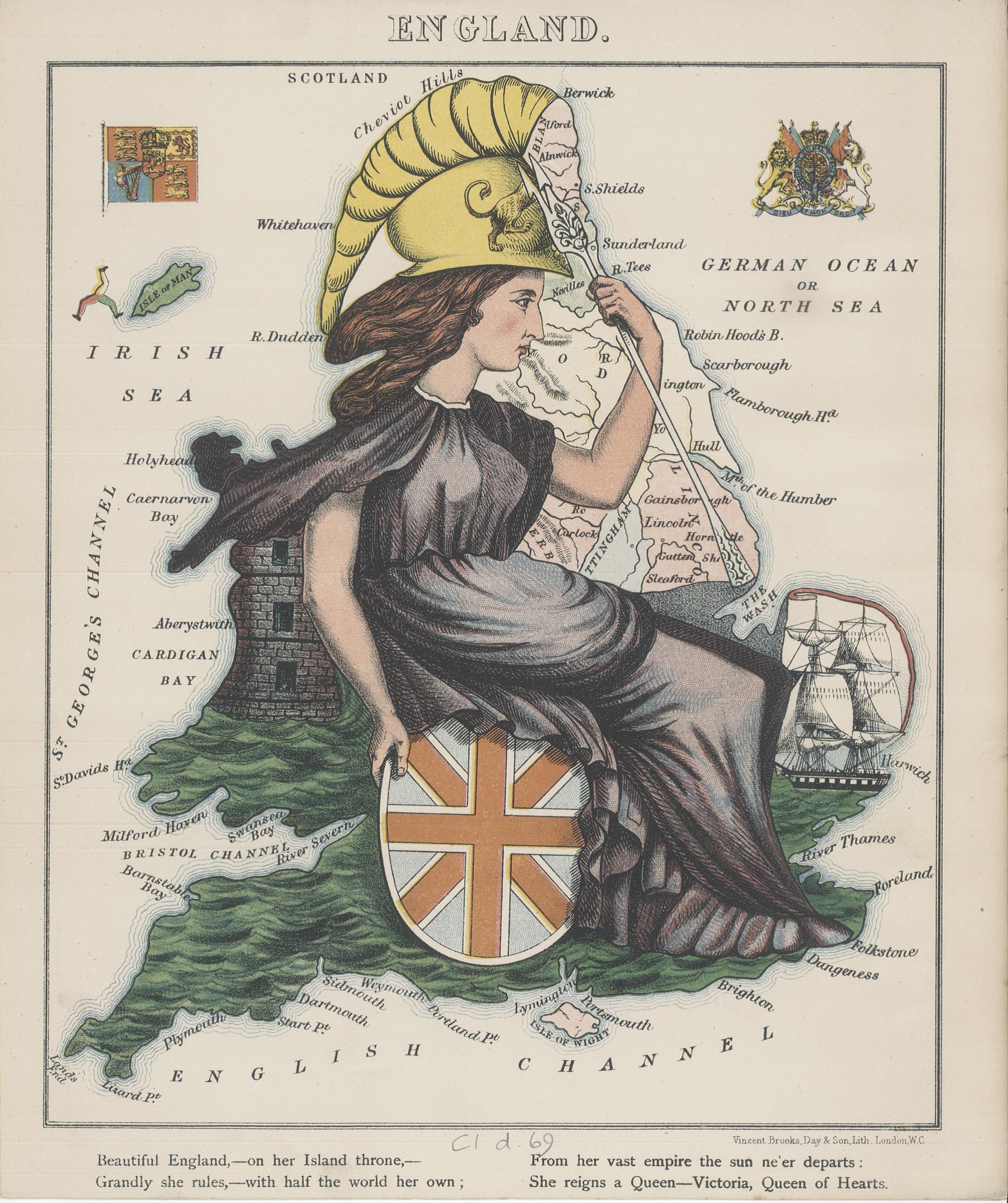 So England sits serene on her throne, keeping an eye on Europe but content with her Empire and the strength of the Navy, here symbolized by a ship in East Anglia while Germany, 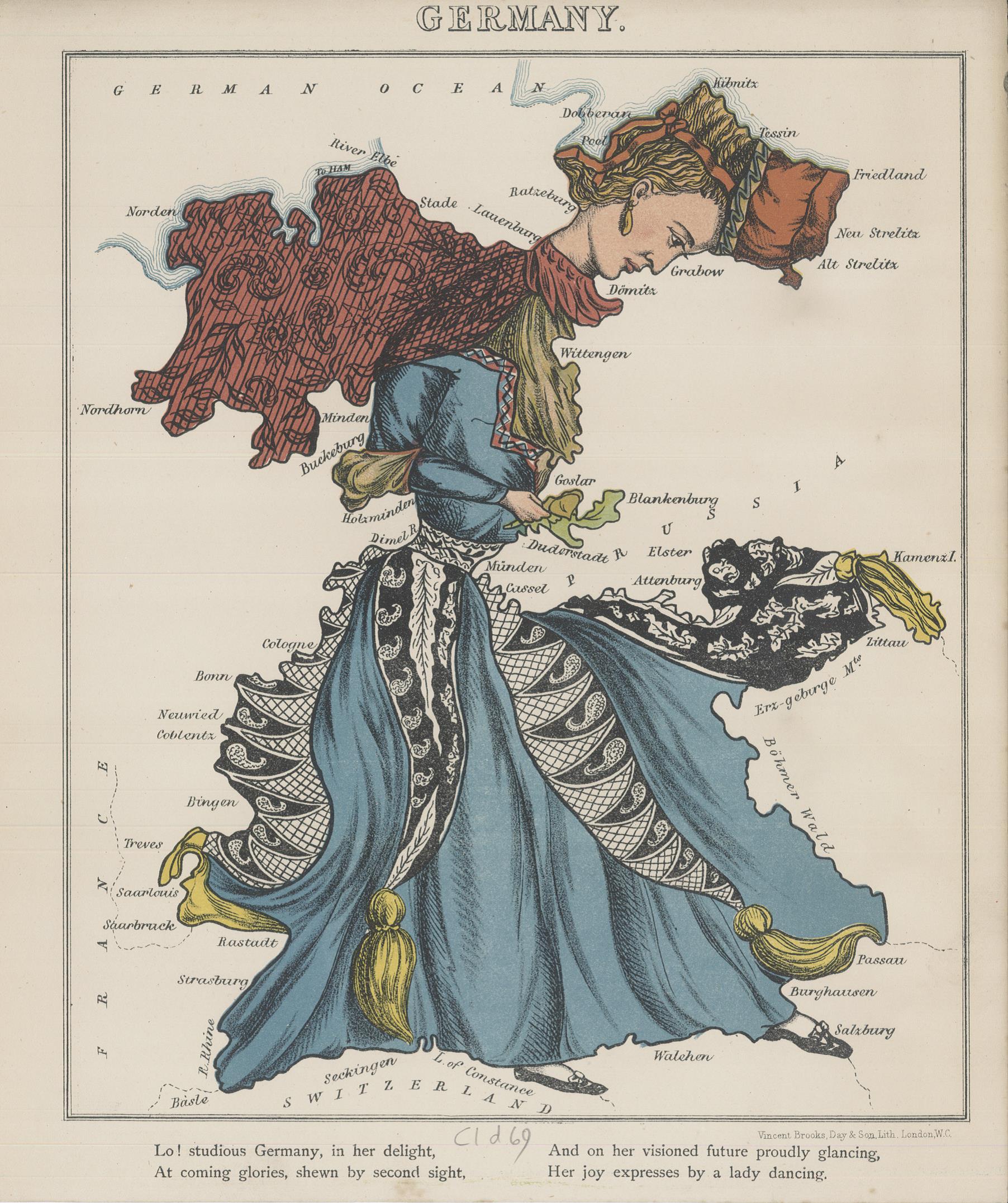 at this time a separate group of states called the North German Federation but soon to join with Prussia to form the German Empire after Prussian victory over France in the 1870 Franco-Prussian war. 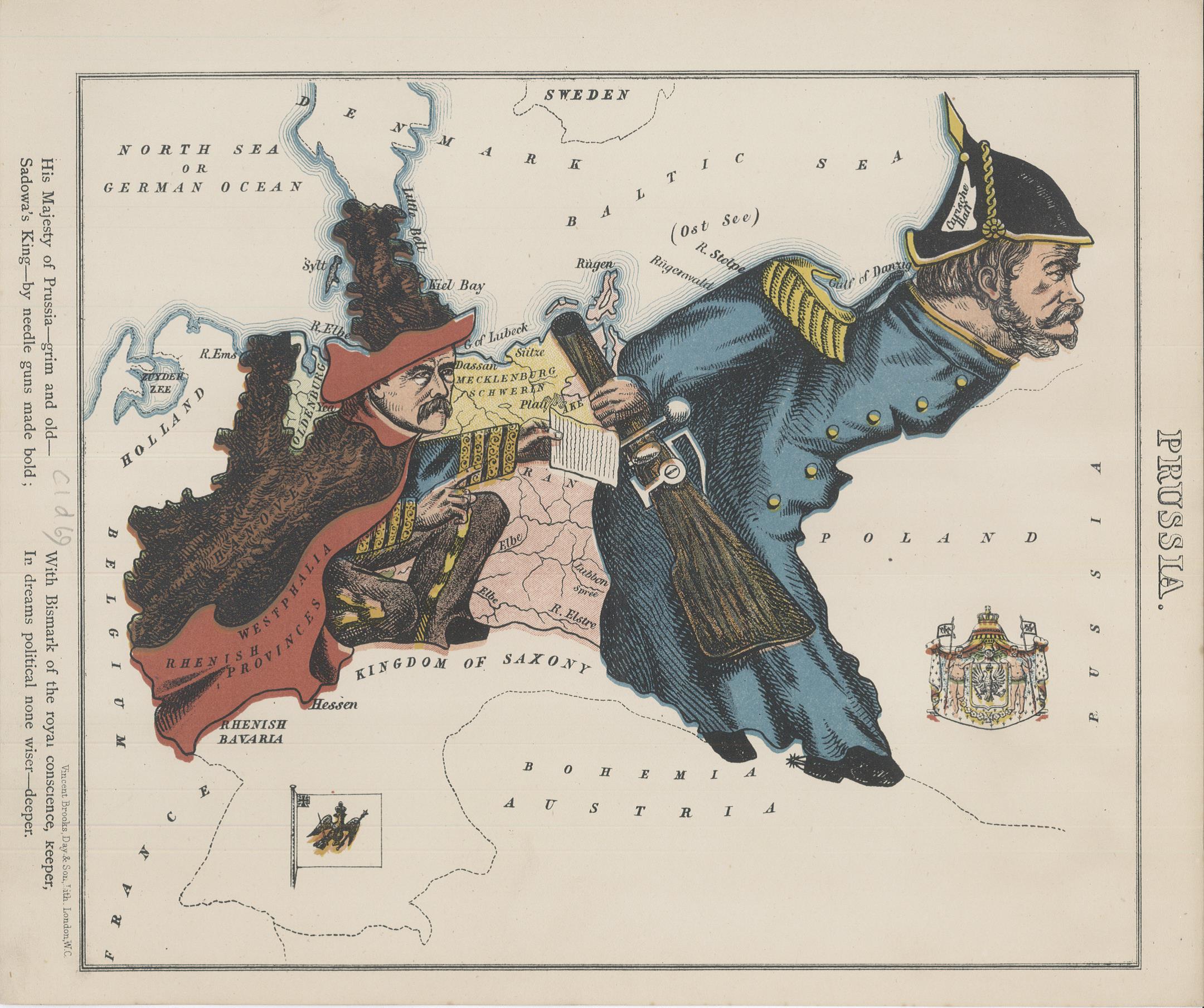 One thought on “Cartoon maps”