John Pryer’s map ‘A Pocket Companion of ye Roads of the South Part of Great Britain, called England and Wales…’ is not what it first appears. Originally printed in 1724 the map shows the road system of England and Wales giving distances between major towns and cities and is similar to a host of road and travelling maps published around the same time.

Overprinted onto the original map is additional information tracking the path across the Southern parts of Ireland and England of a solar eclipse on the 11th of May, 1724. Given that the map dates from 1724 there is a chance that this map was published after the eclipse to show the route of the shadow of the Sun, not before. Either way this is the earliest sheet map held in the Bodleian to show the path of an eclipse of the Sun. 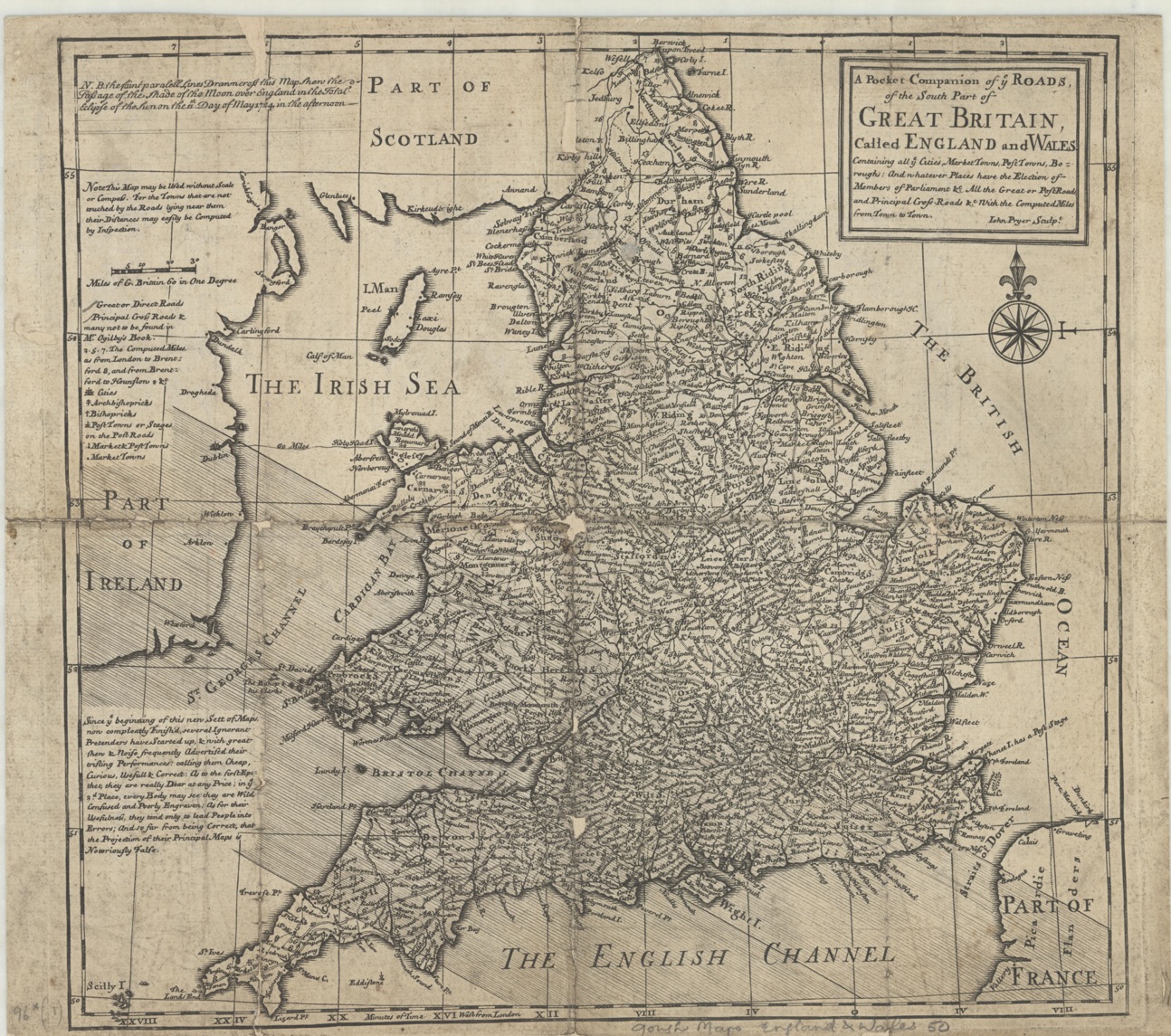 A Pocket Companion of ye Roads of the South Part of Great Britain…1724. Gough Maps England and Wales 50

Pryer’s map is a copy of an earlier map with the same title by Herman Moll, from 1708. This map went through several editions and was copied, both legitimately and not, a number of times. Moll includes a complaint against copyists in a piece of text on the map

‘Since ye beginning of this new sett of maps now completely finish’d, several ignorant pretenders have started up & with great shew & noise frequently advertised their trifling performances: calling them cheap, curious, useful & correct: as to the first epithet, they are really dear at any price; in ye 2d. place , everybody may see they are wild, confused and poorly engraven; as for their usefulness, they tend only to lead people into errors; and so far from being correct, that the projection of their principal maps is notoriously false’.

It is not recorded whether Pryer is one of Moll’s ‘Ignorant pretenders’, though the lack of any mention of Moll and his map makes it likely that Pryer used Moll without authority. It does bring into question though why he would include the diatribe against unscrupulous publishers and cartographers if he was one himself.

If there is doubt about Pryer and Moll there can be little of Moll’s opinion of one of the most celebrated cartographers of the time, John Ogilby. Ogilby created, with the publication of 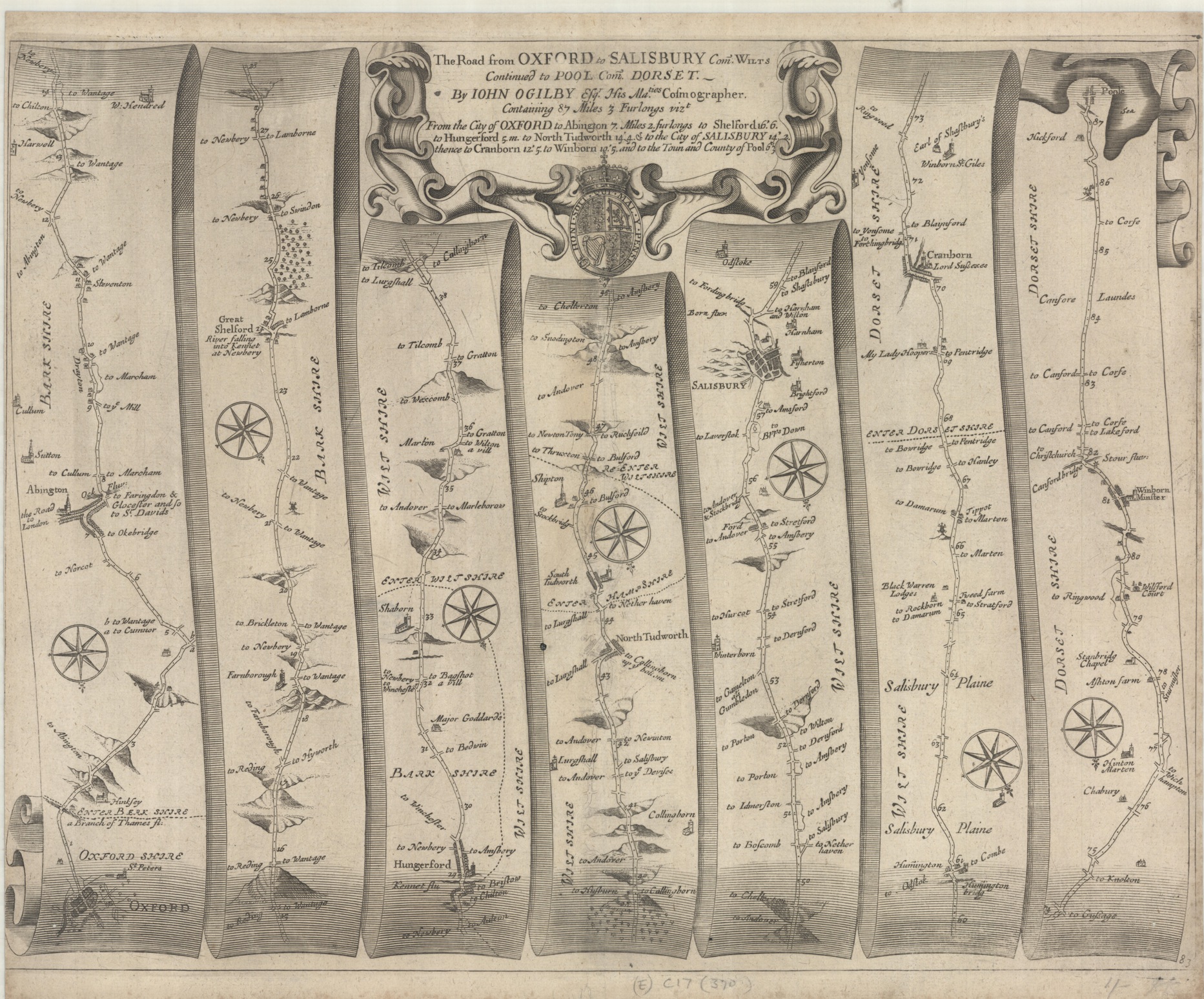 Britannia in 1675, the first road map of Great Britain, and with it introduced the concept of strip maps. In the legend to Moll’s original map, and kept in Pryer’s reprint, is the following

/ Principal cross roads & many not to be found in Mr. Ogilby’s book

This seems a harsh dig at what was, for it’s time, a revolutionary way of showing main post routes and the level of detail involved was far greater than that of other maps of the time, including Moll. Ogilby’s innovative design included mile indicators, side routes and hills (including showing the direction of slope) and was soon taken up by other cartographers in both this country and abroad.

The Eighteenth Century saw an increase in both the publication and quality of maps such as Pryer’s as the growth in both astronomy and scientific knowledge advanced, and with it the ability to predict and plot each eclipse. Previously eclipses were reduced to diagrams in the corners of world maps, such as the example here from John Speed’s ‘Prospect of the World’ atlas for 1627.

Extract from ‘A new and accurat map of the World, drawn according to ye truest description, latest discoveries & best observations yt have beene made by English or strangers’. John Speed, A prospect of the most famous parts of the World, 1627. Facsimile edition, G1 B1.21L