Working as a volunteer in the Map Room in the Weston Library may not be your forte but I can assure you having been doing just that for the last 2 years life is full of surprises. This week we received an embroidered map of London done by soldiers working for the Disabled Soldiers Embroidery Industry set up to help those recovering from action in WW1. Earlier, I was shown documentation about the ‘Q’ Type Sailing Dinghy, an inflatable sailing dinghy used during WW2, which is of particular interest to me as an ex-navigator on maritime Shackletons and Nimrods. One of our primary tasks was Search and Rescue. There were always crews on standby ready to fly and help those in danger at sea whether they be people in ships or yachts in difficulty or aircraft that had ditched. In our aircraft’s bomb bay we carried Lindholme gear which was basically 3 buoyant containers joined by 400 metres of cord, one container had a dinghy in it which would inflate on impact, and the other containers were filled survival rations and equipment. The dinghy had a sea anchor which meant that it would stay roughly where it had been dropped but its position would, of course, be affected by the strength of the local wind and current. The survivors would be rescued by shipping diverted to the scene. 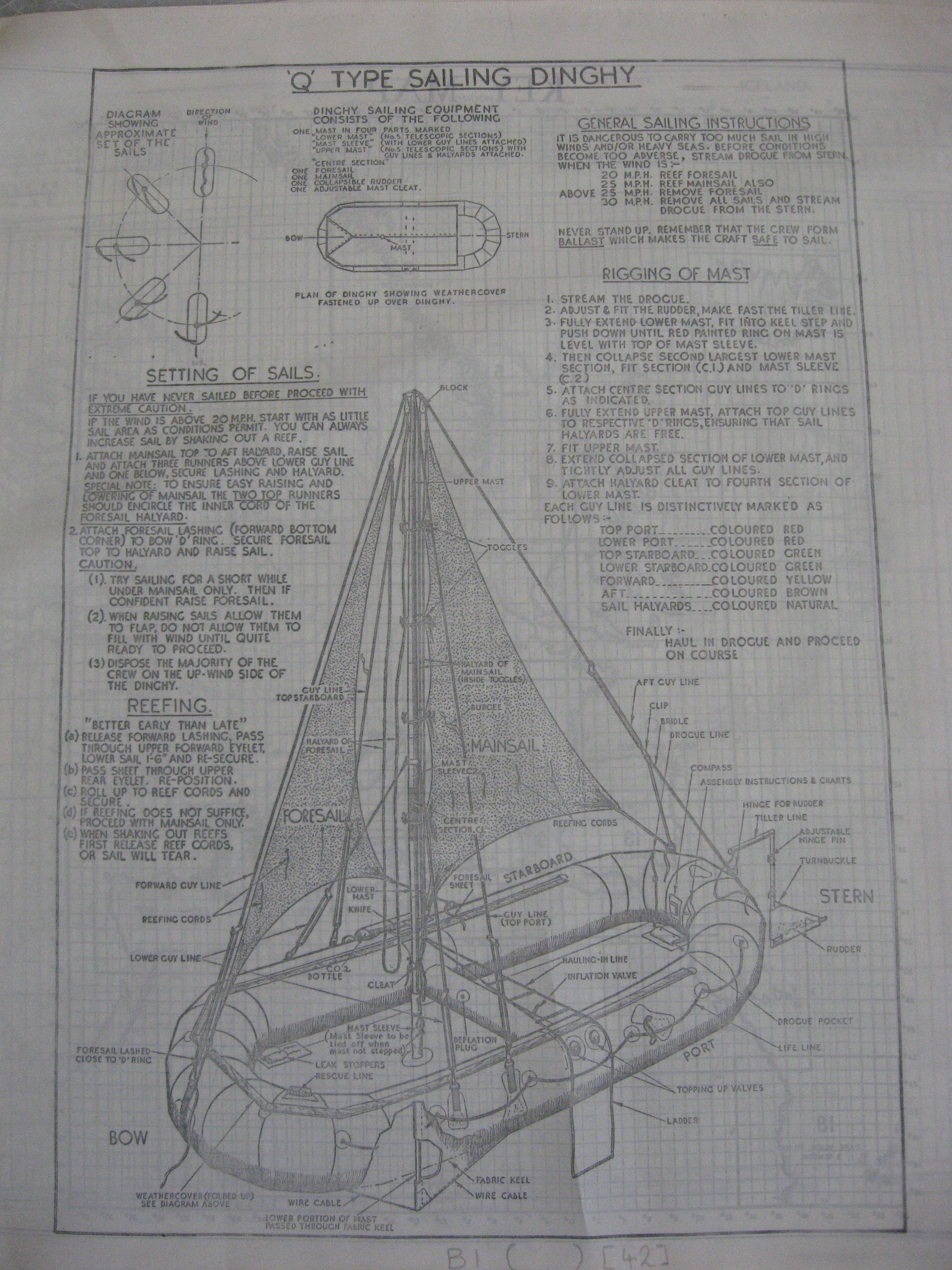 The philosophy behind the ‘Q’ Type Sailing Dinghy, which, as I have mentioned, was in use in WW2, was somewhat different. The dinghy was packed into similar Lindholme gear and dropped to the survivors. However, rather than the survivors ‘sitting tight’ they were expected to sail the dinghy to the nearest land. To do this the instructions, on silk, were comprehensive and included in the dinghy pack. There was a diagram of a fully rigged dinghy with mast, mainsail, foresail, rudder and keel plus a weather cover. There were instructions about how to rig the 4 piece mast, set the sails, general sailing guidance and advice about when to reef the sails. Attached to these instructions, also on silk, were maps of the eastern Atlantic from Northern Norway to the Cape Verde Islands and Iceland. The maps and instructions were all just 12 x 13 inches pinned together in the top left hand corner. The maps were produced by the Sea Rescue Equipment Drawing office and based on the GSGS 4080 plotting series which uses the Mercator projection and landmass heights are shown in metres. There is a compass rose and the lines of magnetic variation are as in 1942. A variable ruler showing statute miles is included alongside the left hand margin. 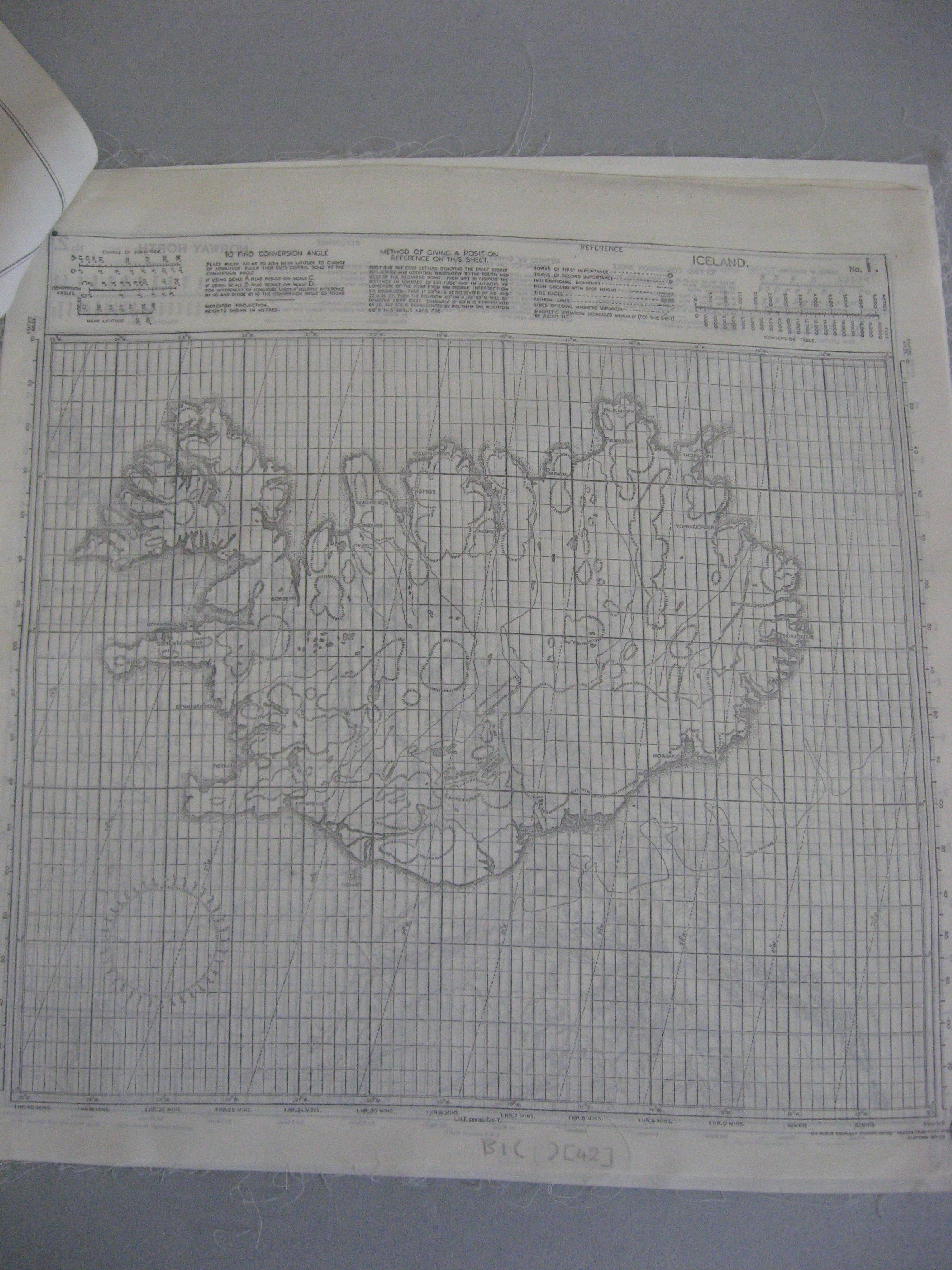 I do wonder how practical the idea of sailing back to land really was. From experience the Atlantic Ocean is rarely smooth and rigging the dinghy would have been a hazardous occupation. One of the instructions was: ‘don’t stand up in the dinghy as you will make it unstable!’ In any survival situation protection from the elements is the most important thing, especially a cold, windy, wet Atlantic. And navigating back to land, well the dinghy had a compass and knowing roughly your location it should be possible to steer he dinghy roughly in the right direction. Perhaps, psychologically, the possibility of being able to sail back was all important with the chance of being picked up by a ship on the way. Or perhaps, when sitting in the dinghy, it was a case of, ‘Give me a map and I am content’ (Wainwright A. 1938). 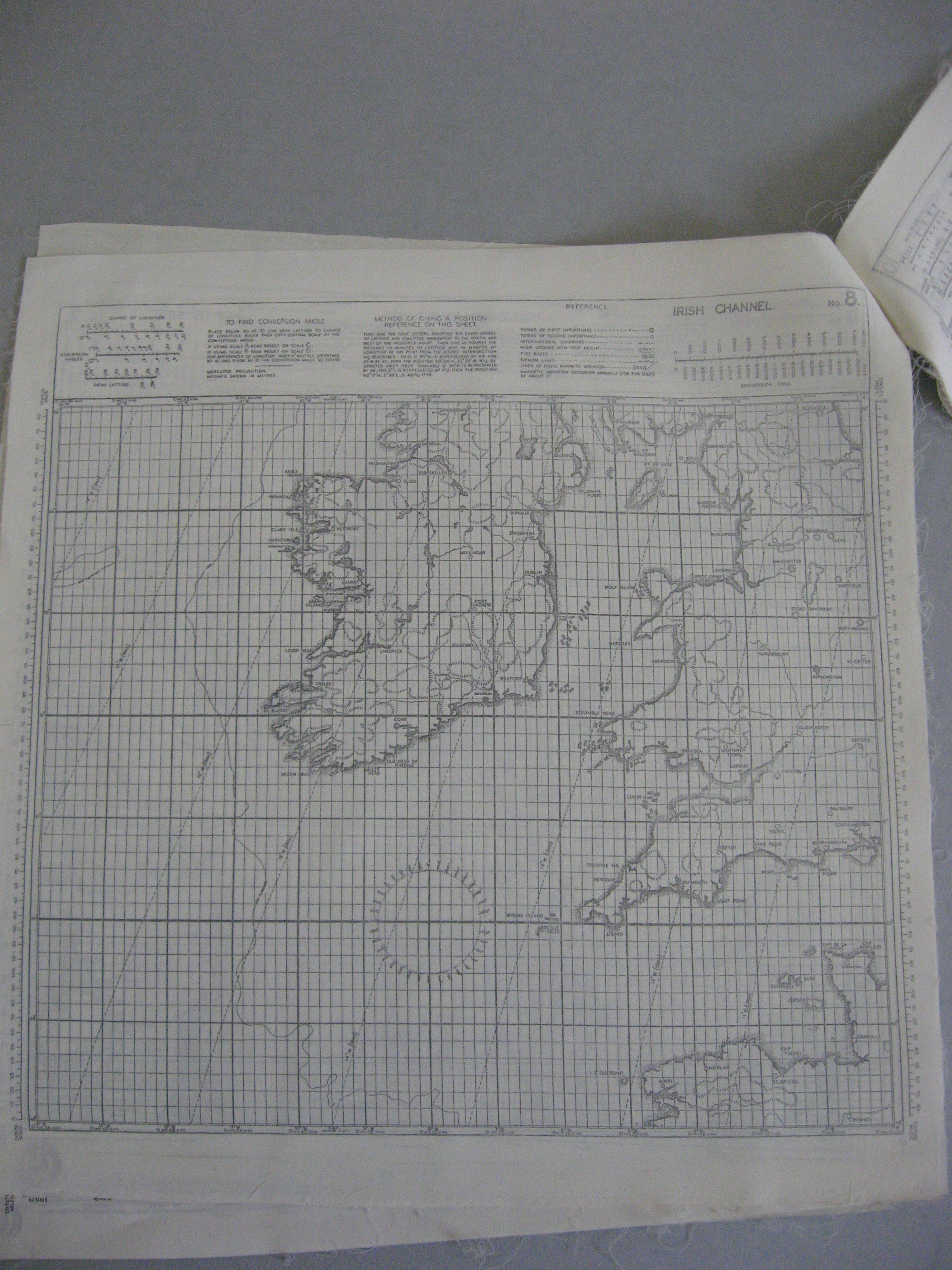 The following images come from a diagram on the use of the Q type provided by the Royal Air Force Museum. According to Air Historical Branch monograph Air/Sea Rescue issued in 1952 ‘the Q type seems to have been introduced in early 1943 and by the end of that year had been cleared for use in the Whitley, Wellington, Warwick, Lancaster and Halifax – it seems not to have been used in the Lindholme Gear. The lateen rig version replaced a more complex sail plan in 1944’. 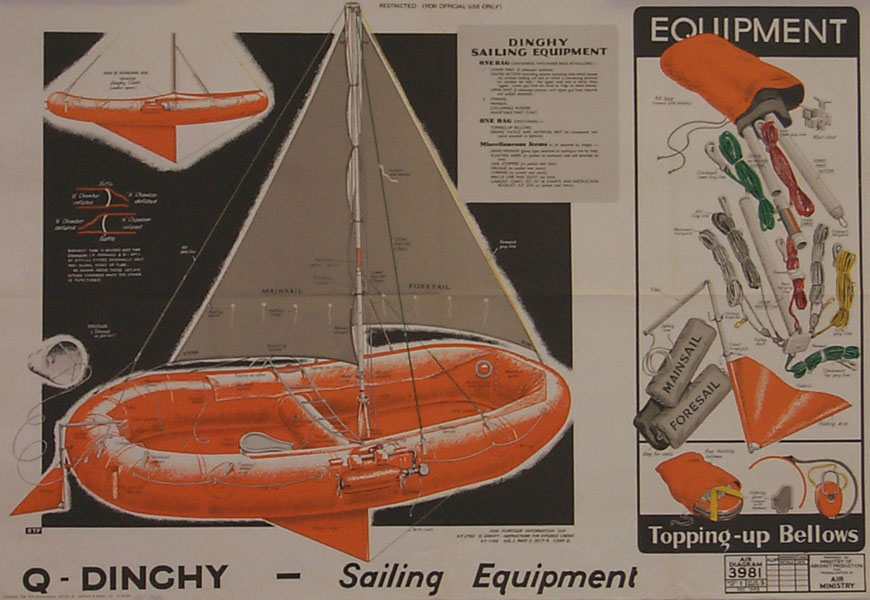 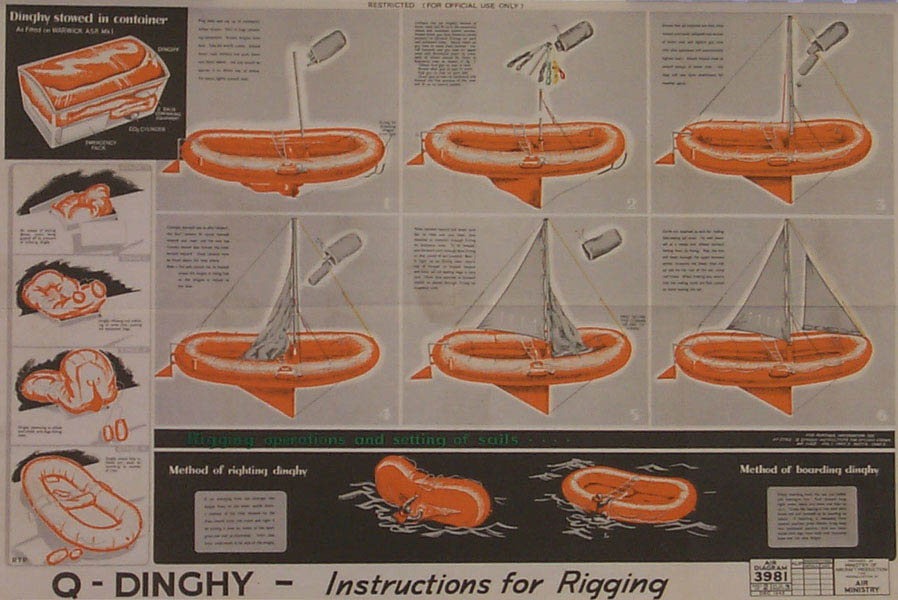 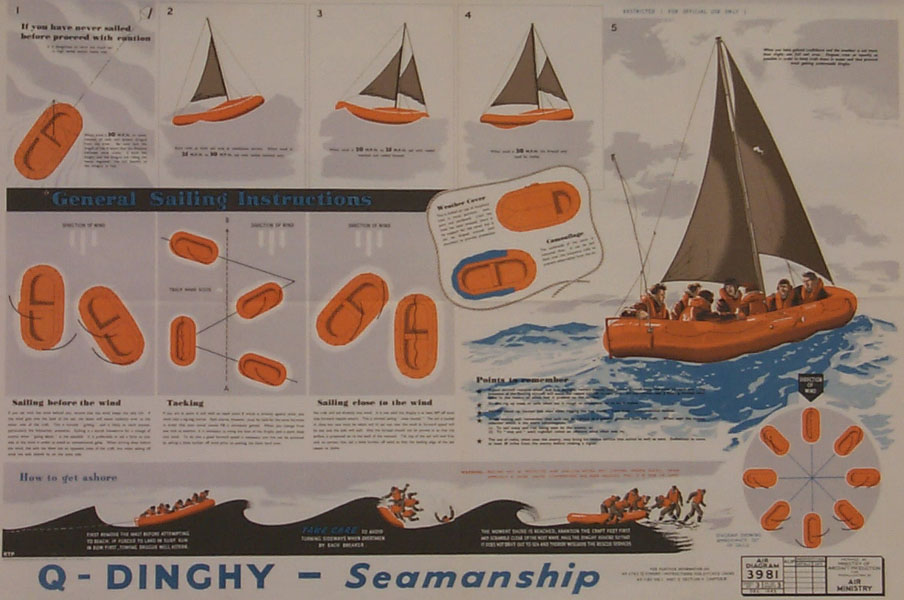 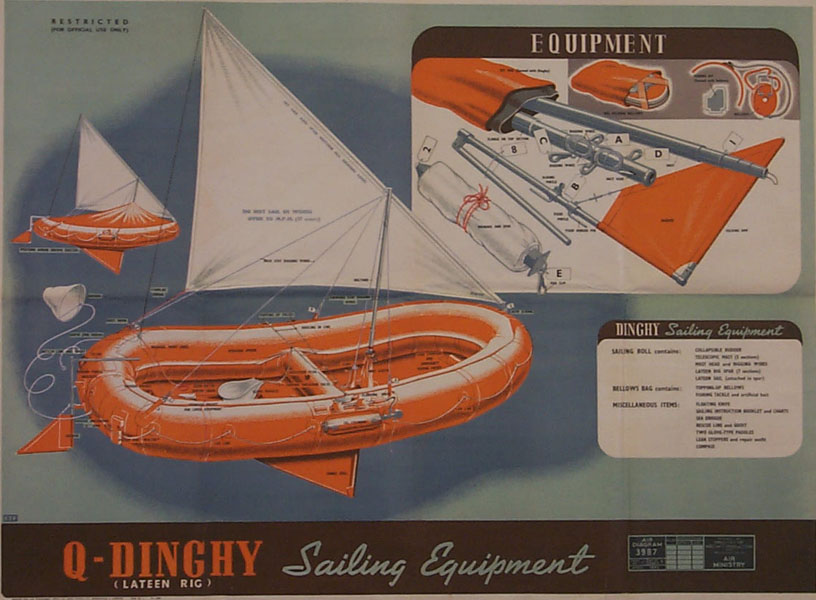