The extracts of the two maps shown here are from a number of maps recently catalogued and added to the collection which were published by Allied Forces to help with the invasion of France, and feature coastal towns on both the North East and South West coast. Both sheets are from earlier published sets by the cartographic wing of the British Army, the Geographical Section, General staff which have been overprinted with additional information on enemy defences.

The Calais map is of particular interest. The defence information was added to the map as late as the 12th of September, just 13 days before the Allies attacked the town. Confirmed information is in blue, unconfirmed in red. Information was gathered from a number of sources, including aerial photogaphy and resistance work. Calais, along with other port towns on the North West coast of France and Belgium, had been heavily defended by the German Army, who believed that any invasion by Allied troops would be at this point. 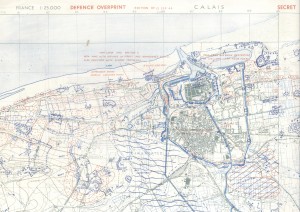 As well as the large amount of information on the front of the map further details are given on the reverse. As well as a full legend descriptions of defences are given in English and French and diagrams of gun emplacements, as shown here. 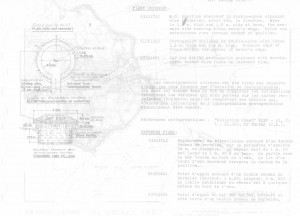