Maps showing the spread of disease first appeared in the United States towards the end of the 1700s and used spots to showing the location of individual cases of disease. The most famous example of such a map was created by John Snow, in his book On the mode of Communication in Cholera (1855). Originally published in 1849, this later edition dealt with a notorious outbreak of cholera in the Soho district of London the previous year, which killed 616 people.

The Bodleian holds a similar map by Dr H. Acland and shows the outbreaks in 1832, 1849 and 1854 of cholera in the St Clements and St Ebbe’s areas of Oxford. By mapping the deaths in London and Oxford Acland and Snow were able to show that all shared a common link, the local water pump, proving how water was the medium through which cholera spread which as a result improved the sanitation in many areas of poor and working class housing. 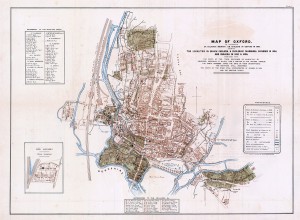 Among the many maps showing disease in the collection are a number showing the spread of Tsetse Flies in Central and Southern Africa. Tsetse flies feed on the blood of cattle, which has serious consequences for the lives of farmers in the regions were the flies are wide-spread, as infected animals produce little or no milk, their manure is too weak to fertilize already poor soil and the bites can often lead to the death of the animal. Tsetse Flies also cause sleeping sickness in humans, which can lead to disability or premature death.

Featured here are extracts from two maps. Both show the spread of the Tsete Fly, and are of Zambia and an area of Africa which was called German East Africa up till the end of the First World War, and now covers Burundi, Rwanda and a large part of Tanzania. 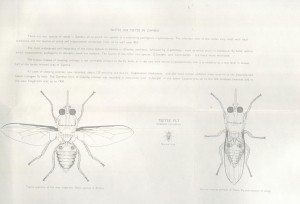 Both are conventional thematic maps showing the spread of the flies by shading. What is different from other disease maps in the collection is that both feature proment images of the Tsetse Fly. 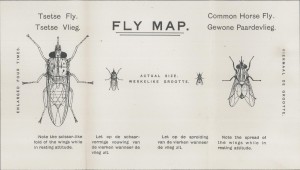 Both images bring to mind the picture of the fly from Robert Hooke’s famous book Micrographia, 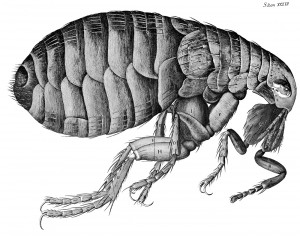