A set of four maps of the Jura region of France came into the Map Office recently, dating from 1844. The maps are fine, in black and white with relief shown in hachures and when joined together measure nearly two metres by one and a half. The mystery comes in the folder they came in.

Stuck onto the inside cover are two photographs, one of a city scene in what looks like Eastern or Central Europe while the second shows a woman, named Katia Wolkoff. Does anyone recognize the city? If so email maps@bodleian.ox.ac.uk, we’re keen to find out. 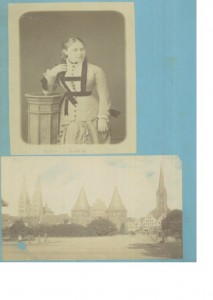 When the name Katia Wolkoff is googled you get an extract from the Daily News from September 1920. John Maladoff of Tiflis, passing himself off as a Military Attache in Italy, accompained by ‘a beautiful Russian Woman, Katia Cocenko Wolkoff’ after giving faked letters of introduction manage to first of all to befriend and then rob and defraud a number of wealthy families in Milan, before making good their escape. Could this be the same Katia is in our photograph?

Many thanks to those who have replied to give us an answer to our question. The city in the picture is Lübeck in Germany.

Paper shortages during the Second World War meant that large numbers of maps were re-used to produce new sheets on the backs of older copies. While for the most part this meant that cartographic departments of various armies, the Geographical Section General Staff for the British and the Generalstab des Heeres for the Germans amongst others, would use old stock from their collections towards the end of the war Allied forces began to capture large areas of land formly occupied by Axis troops, and with this also captured large amounts of enemy resources, including maps.

With the push into Germany starting in late 1944 the need for large scale detailed mapping of the country became clear, and this is one of the sheets produced by the G.S.G.S. at 1:25,000 scale. The example here is one of a set of over 2,500 sheets. 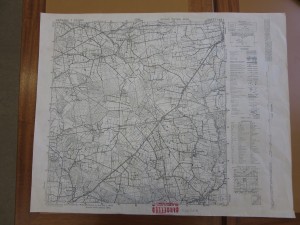 But what marks this sheet out from all the others is what is on reverse. When you turn the map over you find, overprinted with thick blue lines and the word ‘Cancelled’, is part of a map which made up a series made by the German Army in preparation for the planned invasion of England in 1941. With perfect symmetry you have an map for the invasion of Germany printed by the British War Office printed on the back of part of a sheet published 3 years before by the Germany Army for the invasion of Britain. 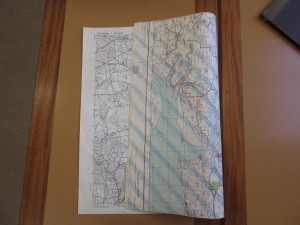 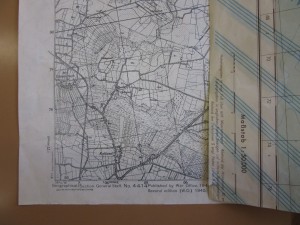