Renaissance fortifications map well. Clear lines, often in a symmetrical pattern, stand-out amongst any other topographic detail on display. Such beauty of design has come down to us at a cost of necessity though. Plans were born out of the need to counter the threat from a new type of warfare as cannon balls wrecked havoc on the old castle walls.

The radical design change from castle to fort came about in fifteenth century Italy, when French troops involved in the Great Italian Wars used cannon against castles. When older fortifications crumbled against the onslaught Italian engineers, including Michelangelo in Florence, designed new fortifications which soon became the standard across Europe. The sharp angles and triangular bastions of the new design deflected incoming artillery, and gave the new structures their name, Star Forts. With their angled walls and triangular bastions star forts also had the additional benefit of funnelling attacking troops into narrow spaces where enfilading fire rained down on them from within the fort. With these angled walls there was now no longer any place in which defending troops couldn’t direct fire. 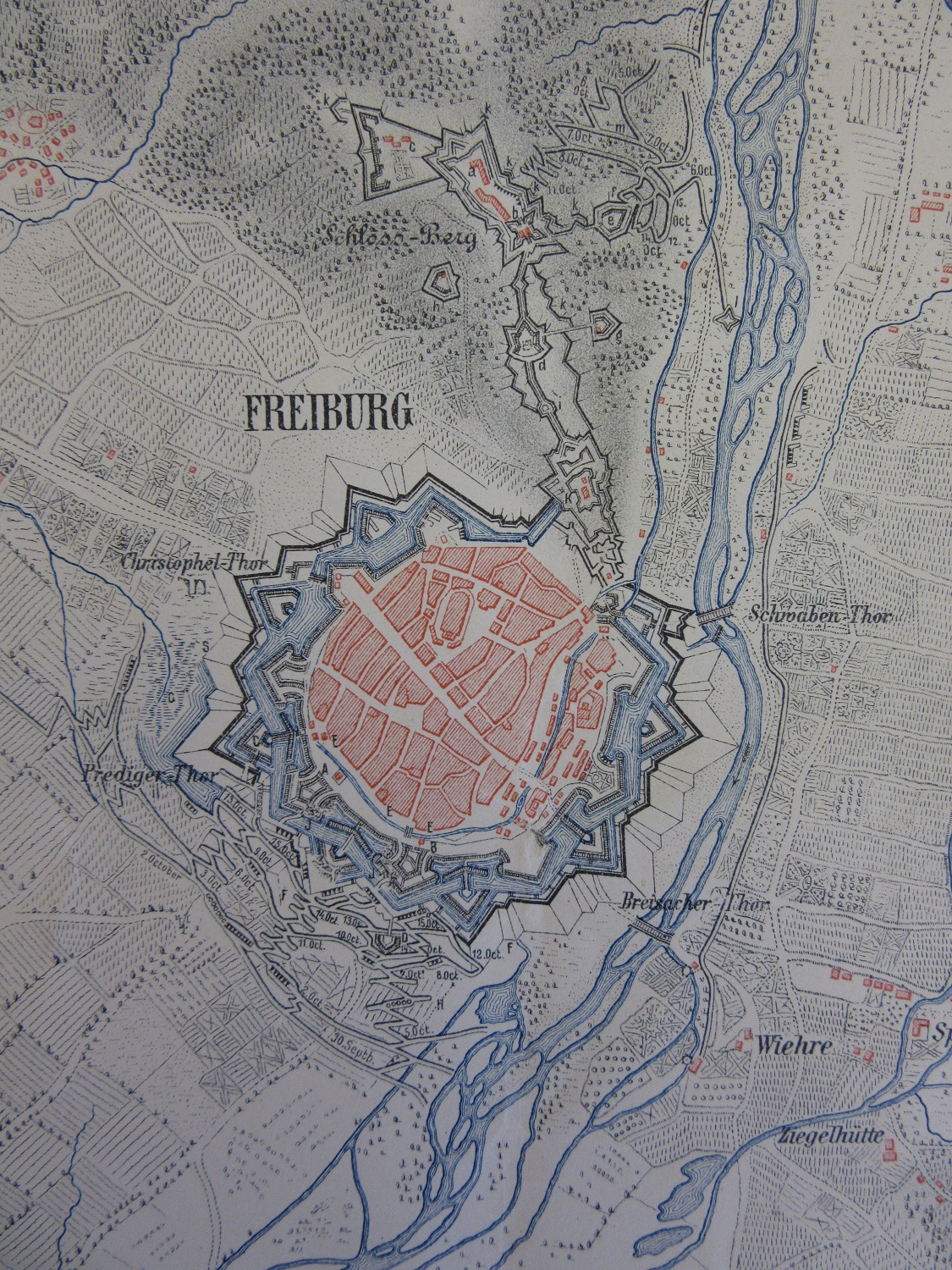 With the new design of the star fort architects and engineers no longer needed to make the best of the landscape. Previously hills were used to build castles on, the steep slopes were hard to attack and with the only weapon available before the cannon  being the arrow shot from a bow the high walls and steep sides made defence easy. Now forts could be placed anywhere, making good use of the commerce and transport that rivers brought. Cities soon grew in and alongside the forts. 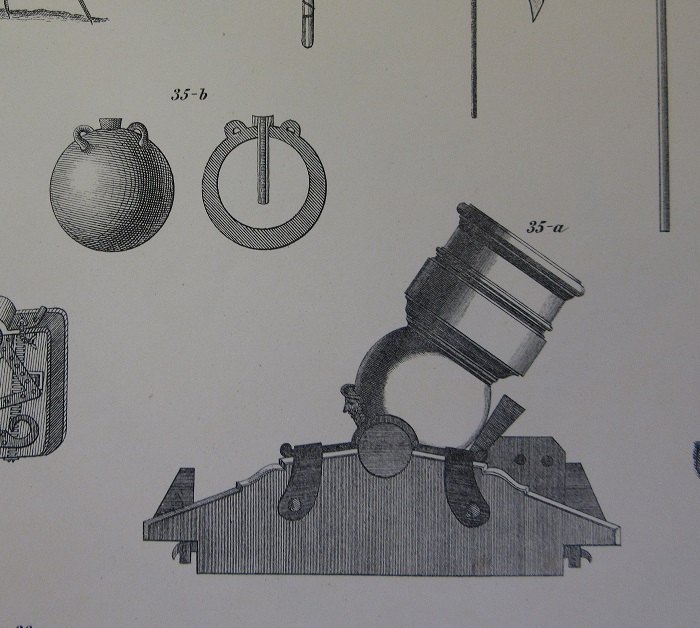 One of the main elements to the new design was the use of low walls, giving less of an area for cannon balls to strike. Earthen banks were thrown up in front of the walls to deaden the impact of artillery but this would have, in theory, made it easier for troops to break into the fort. To counteract this ditches were dug in front of the banks, creating a steep slope and thus slowing down any advance. In the picture below, of Graz in Austria shows the ditches and banks used in the construction of a fort (image from Graphische Beilagen…). 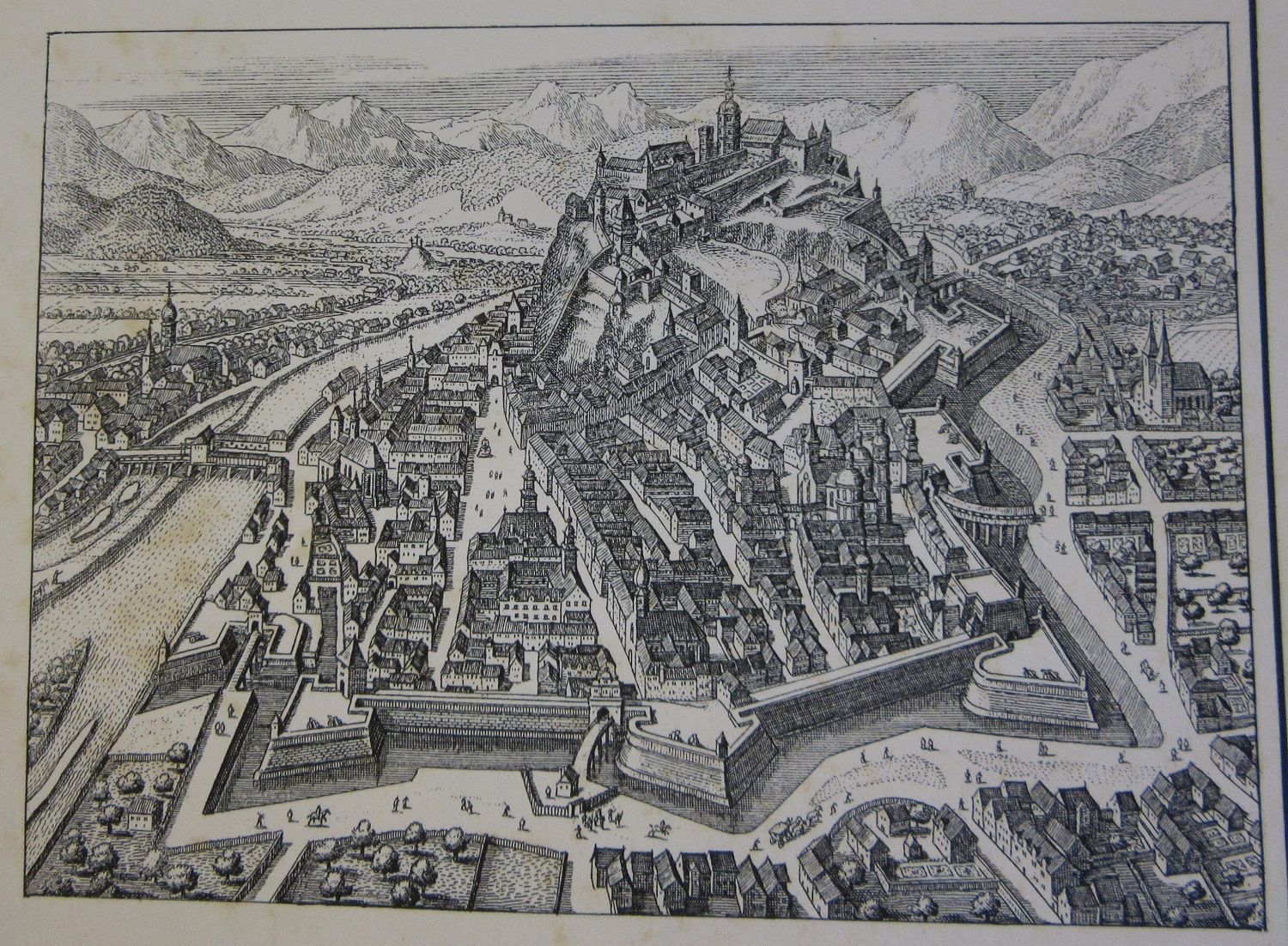 Another example of a star fort is that of Neuhausel, originally in the Hungarian Empire but now in Slovakia and named Nove Zamky. The fort was originally built to defend the city against the troops of the Ottoman Empire. This picture, again from the Graphische Beilagen…, shows the fort under bombardment

This radical new approach to the construction of defences was supported by a growth in literature about the design of the fortifications. Focusing on the geometry of the design, the engineering of the construction and the military benefits of attack and defence the publications were one of the many sciences which blossomed at the time of the Renaissance. The next two images come from Les Travaux de Mars ou l’art de Guerre’, by Allain Manesson Mallet, published in France in 1696. The first shows the different designs now available to the military engineer, and interestingly compares modern to ancient fortifications. The second is a lesson in geometry, with a timely reminder underneath of what all this abstract paper work leads to. 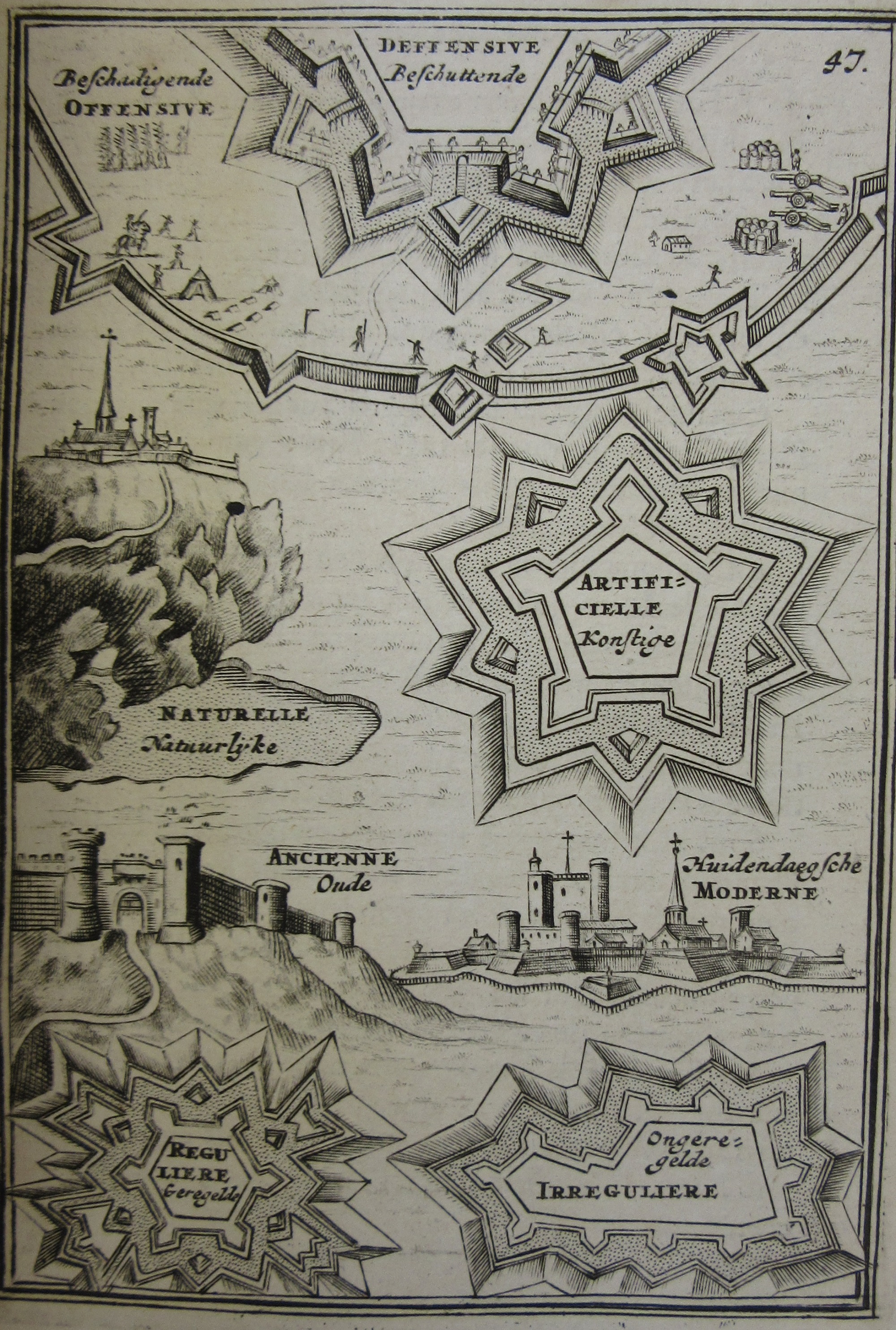 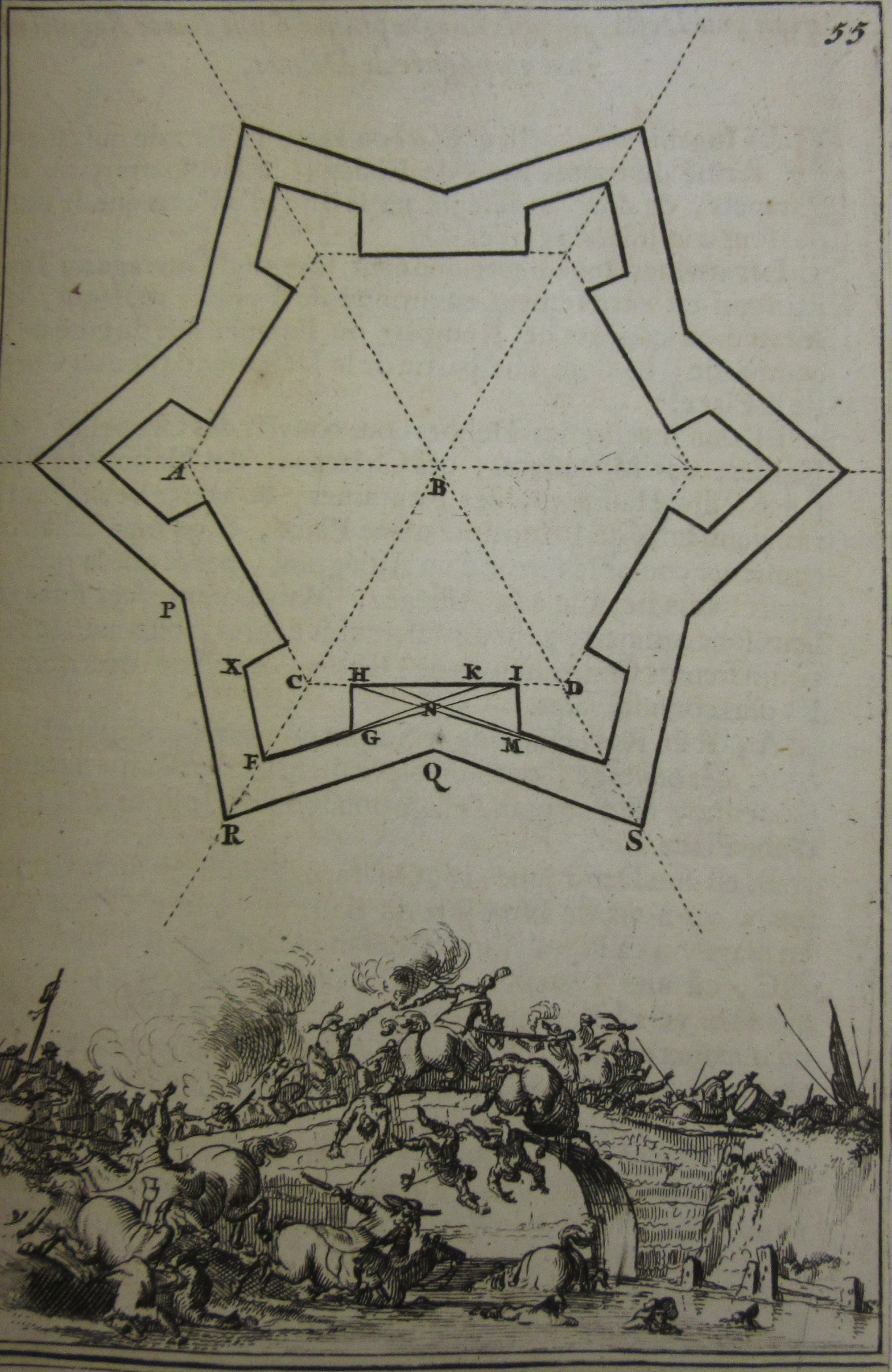 This image come from Introduction a’ la Fortification, by Nicolas de Fer in Paris in 1690, again showing designs of fortifications. 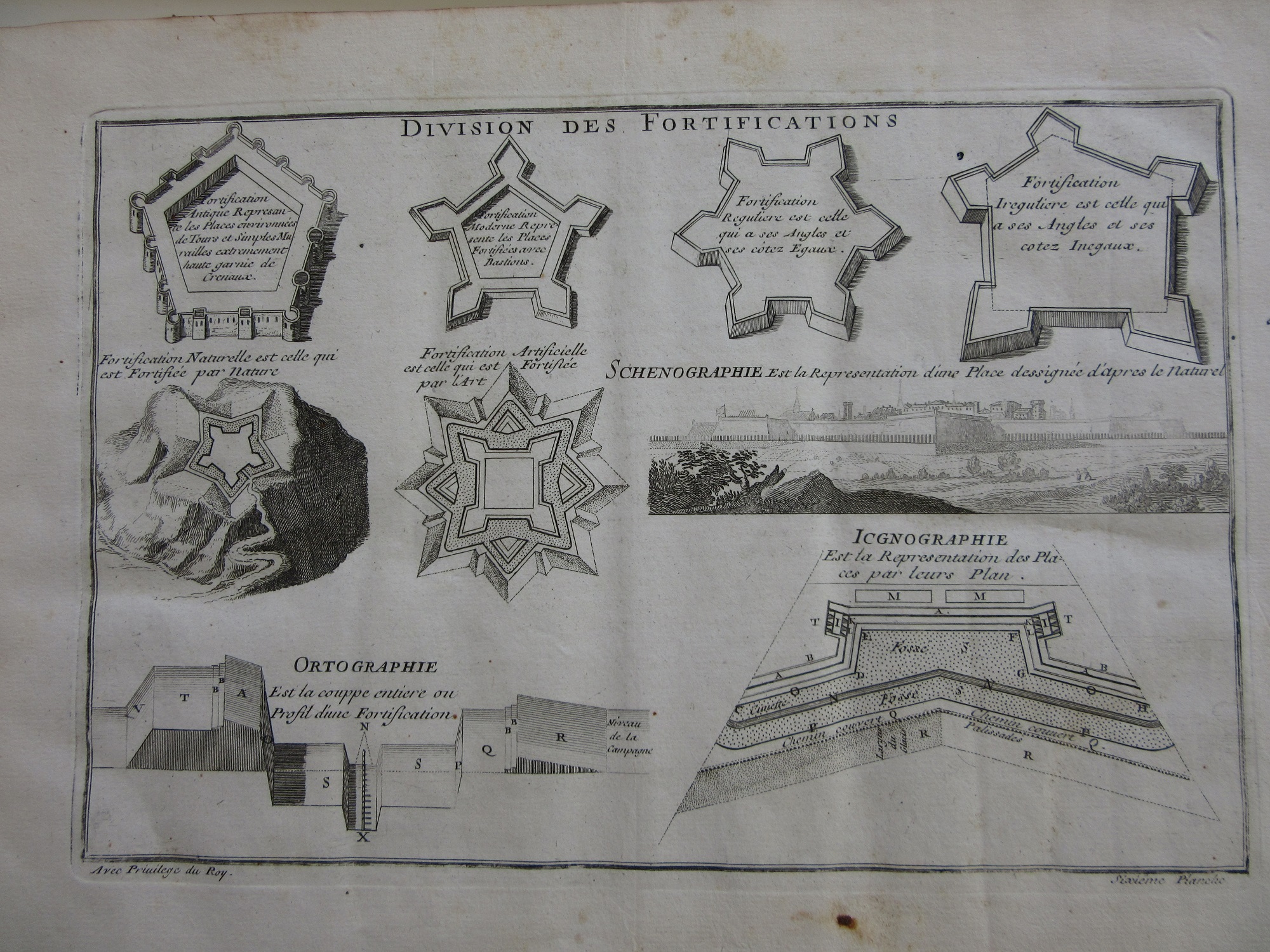 To finish, this beautiful map of Portsmouth, a long established naval port, from circa 1716, 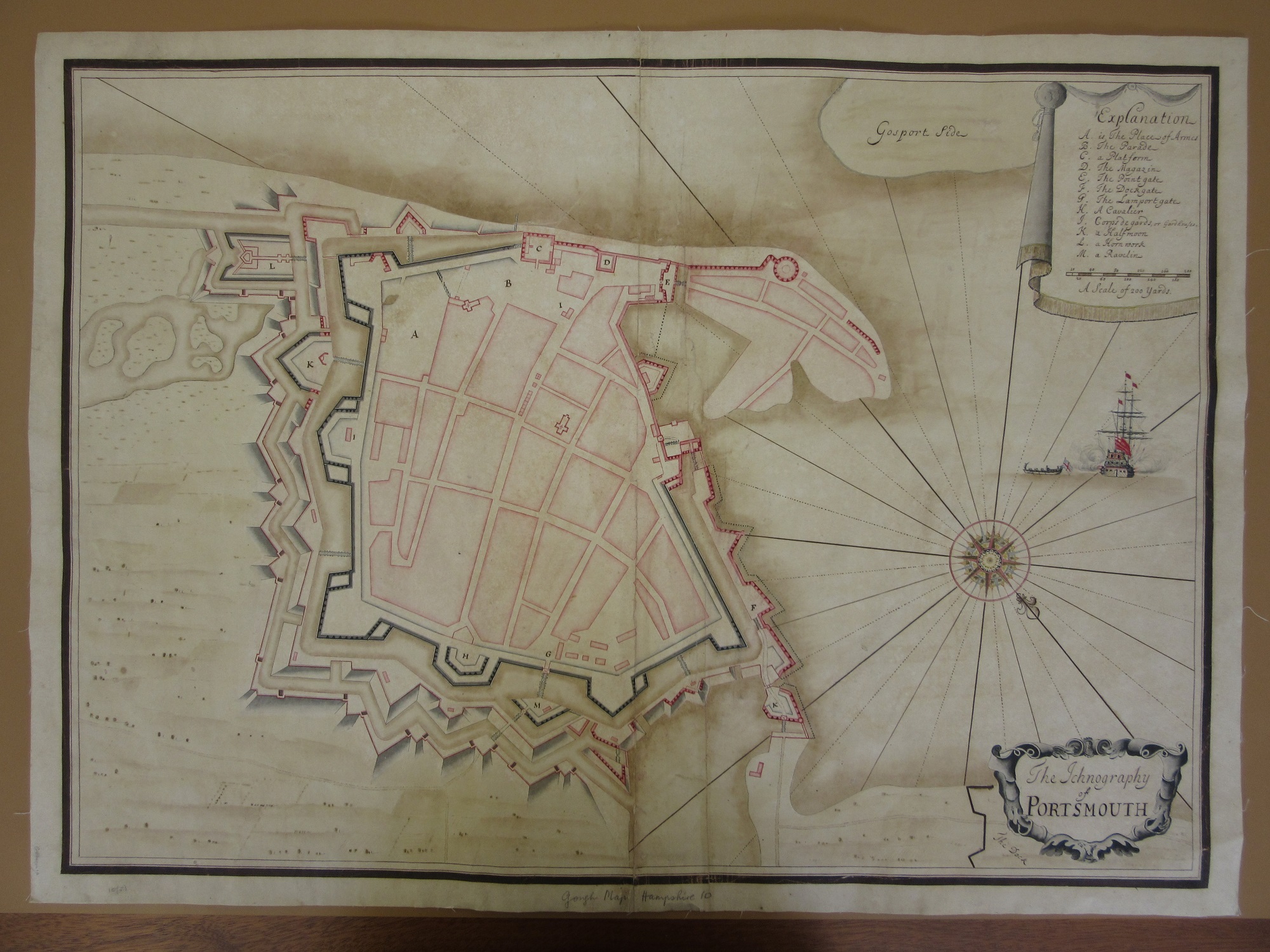 Ichnography is another term for a ground plan. The map is a very good example of a coastal plan of the time, featuring a compass rose and naval scene, and to add to this blog, particularly fine defensive walls.