These panoramic views of Spanish cities come from the celebrated atlas Civitates Orbis Terrarum, published between 1572 and 1617 in numerous editions in German, Latin and French. The atlas features plans of over 450 cities, mainly European but with some (including a number of views of Jerusalem) from the Middle East, from North Africa and two; Mexico and Cusco, from Central and South America.

The plans in the Civitates… are presented either as a panoramic view, like the Spanish examples shown here, or as a normal map. The panoramic maps allow for local scenes to be included in the foreground, mostly these are of an agricultural or pastoral nature such as this scene of

Barcelona, which as well as the wooing couple include a ploughing team and a rather dramatic rainbow. Another plan, that of Conil de la Frontera on the Atlantic coast, shows a group of fisherman salting their catch outside of the impressive walls of the city.

The atlas was published during a time of both religious upheaval and the spread of the Ottoman Empire in the East of Europe. While the majority of the views feature the type of scenes shown in this blog piece others reflect in some of the plans the threat to peace and established order in Europe at the time. Many have a gallows outside of the city walls, while the plan for the Hungarian city of Papa shows the punishment by impaling for the Christian garrison by the invading Turks. This last plan, that of San Sebastian, also has a dark element, showing the martyrdom of the Saint that gave the town it’s name.

The two gentleman in the bushes looking up at the Saint are Abraham Ortelius and Georg Hoefnagel. Both were engravers and painters who worked on many of the plans in the atlas and feature – in a way similar to Alfred Wainwright in his mountain and walking guides – in a number of the plans. By the first publication of the Civitates… in 1572 Ortelius had already published the first volume of his hugely successful Theatrum Orbis Terrarum in 1570, a series that ran to 34 editions in a number of languages, which the Civitates…was designed to be a companion piece. Both the Theatre… and Civitates… atlases benefitted from improved techniques in printing in the early 16th century. From the early days of printing the woodcut method, where the areas of a piece of wood are carved off leaving just the parts of the wood raised which are then inked and the image transferred onto paper, were the standard way to present a map. By the early 16th century this process had been replaced by metal engraving, which produced an image with finer detail and more depth. The process is the exact opposite of wood cut, with metal engraving lines and areas are cut away that will become the map, the sheet is then covered in ink, which is wiped off the surface of the metal leaving ink only in the cut grooves. Paper is then pressed onto the plate and the ink is transferred onto the paper. As well as the improvements in reproduction that engraving brought to map production it also had another benefit. The plates were often sold on to other cartographers when no longer needed, enabling later prints to be produced.

Cadiz, taken from Civitates Orbis Terrarum, and published between 1593 and 1594. The shelfmark for this, and the other maps shown here, is (E) C38 (167). There is a facsimile of Civitas orbis Terrarum by Georg Braun and Franz Hogenberg, based on a Latin edition published between 1612-1618, on the open shelves in the Rare Books Reading Room of the Weston Library, the shelf mark is G1 B1.18. 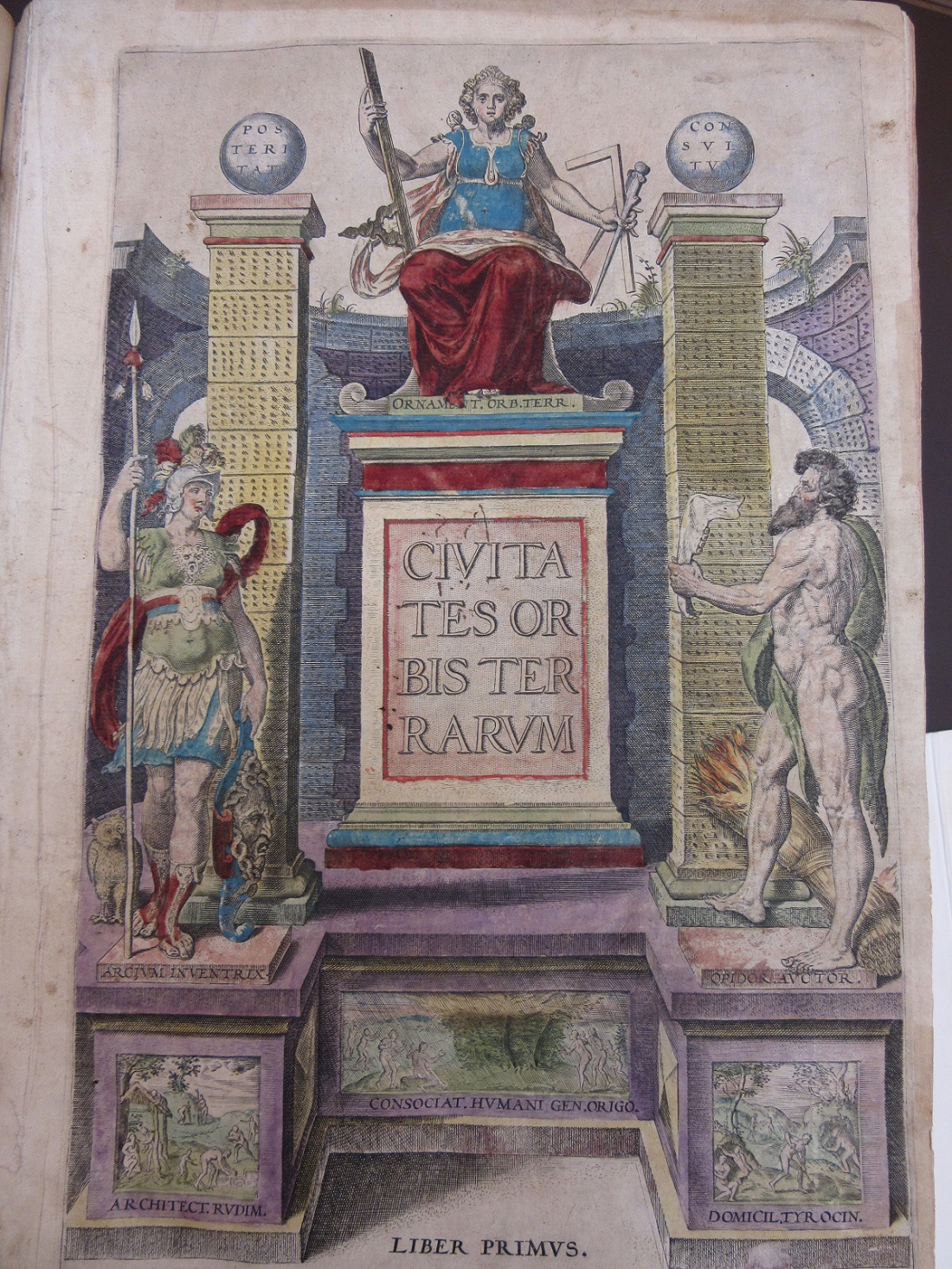 The frontispiece from the 1572 Latin edition of Civitates orbis Terrarum. The figure on the left is Minerva, Goddess of intelligence, peace and wisdom. Minerva is particularily relevant to the atlas as she is the patroness of cities.  Opposite her is Hercules, symbolizing strength  and courage. When shown with Minerva the two represent strength, both the physical and moral kind. Cybele, Greek goddess of the Earth and protector of cities sits at the top. Vet D1 b.2.

The Civitates… is just one of the maps featured in a new book published by the Bodleian on maps, Treasures from the Map Room, details of which can be found here                    http://www.bodleianshop.co.uk/books/new-arrived/treasures-from-the-map-room.html