Physical features rarely change. It takes something pretty spectacular, a volcanic eruption or large-scale mining say, to make a difference to the surface of the earth. Maps reflect this, hardly changing apart from the style of printing or colours used. What does change though are names, particularly names in countries which go through political or military upheaval. Stalingrad is one of the more famous cases in point. 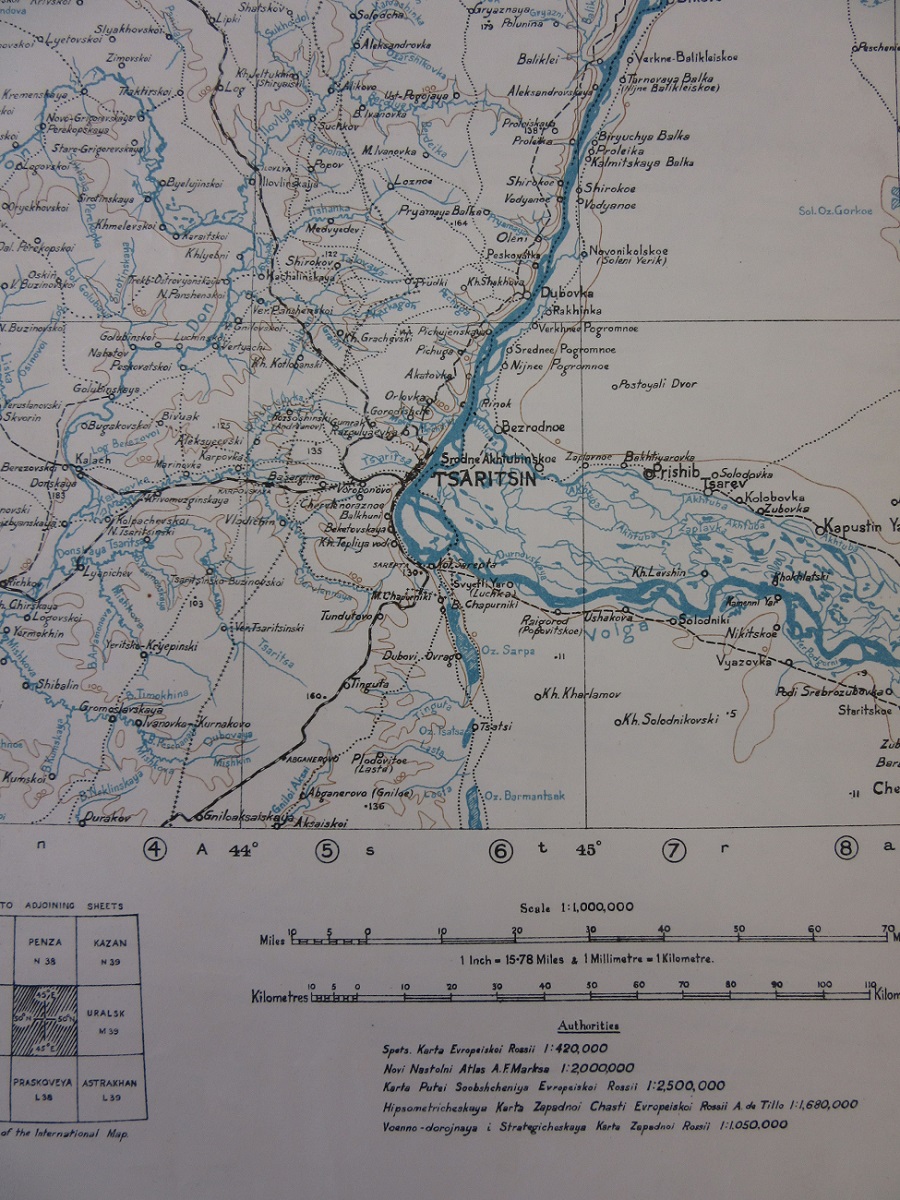 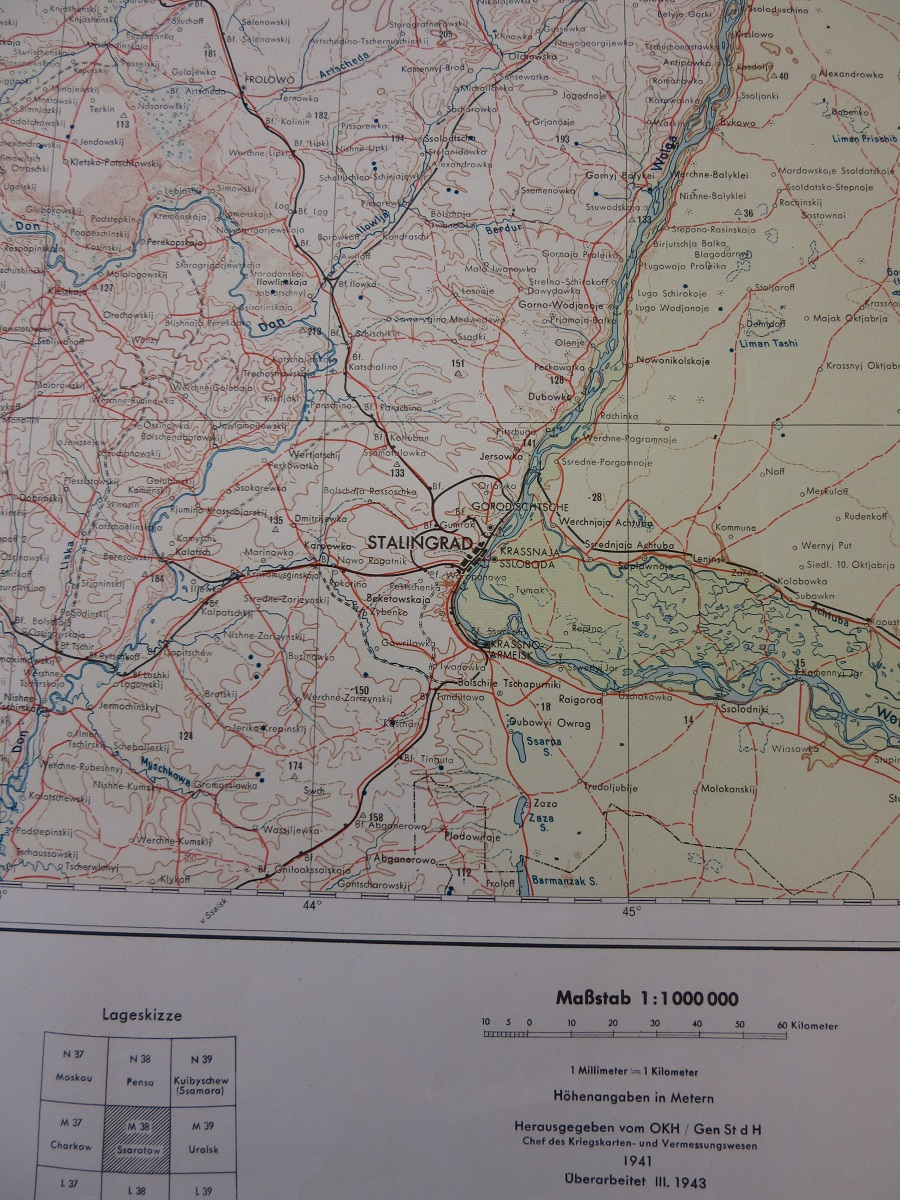 These maps come from the International Map of the World, one of the most ambitious and celebrated of all map series. The scheme was originally proposed at an international Cartographic Conference in 1891 by a German cartographer called Albrecht Penck with the intention of covering the whole of the Earth with maps at a scale of 1:1,000,000.  The suggestion ran into immediate problems, both technical and political, not least of which was determining the meridian used. Meridians are crucial in the making of maps, especially a global series as this would be, as they set the degrees used. French cartographers wanted to use their Paris-based meridian, English cartographers pushed for Greenwich. 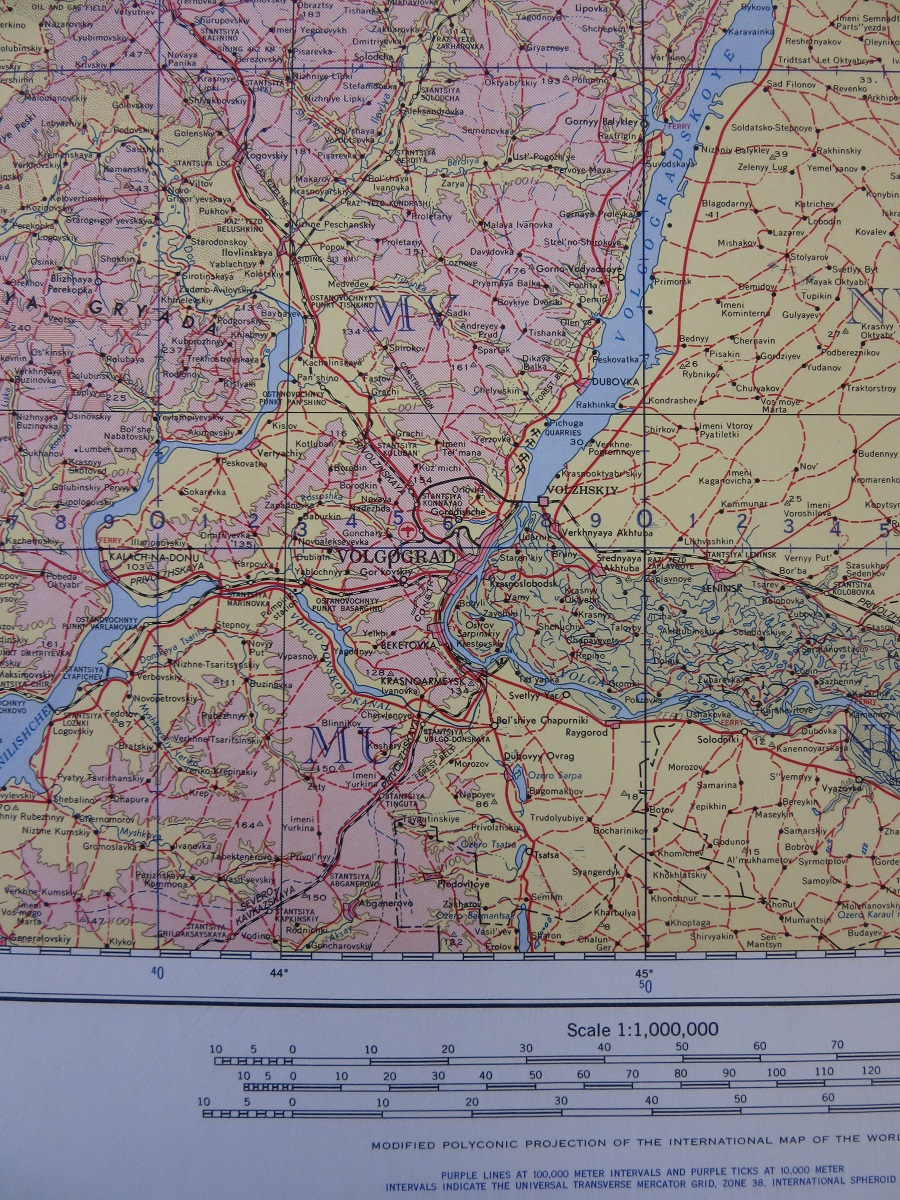 For Penck the benefits of such a scheme were numerous but the two most important were that the maps would produce a general cover of the Earth at a scale detailed enough to be of use and that a large area of the Earth had already been mapped at this or a similar scale so the scheme was already, unofficially and without been called as such, partly in place. Penck set out the rules by which his maps would be made. Latinized names and the use of as few colours as practical were intended to give the maps as uniform a look as possible. It took until 1904 before numerous issues were resolved, and for the first maps to be produced, with French, German and English military cartographic groups publishing maps of areas of colonial interest (Germany maps of Eastern China, France maps of Persia and the Antilles and the English Africa). Eventually the entire globe was covered by 2,500 sheets, sheets which often had numerous editions and published by countries with opposing political views. For example during the period of the Second World War different editions of the sheet covering London and the Channel were  published by the cartographic departments of the British, Soviet and German military. 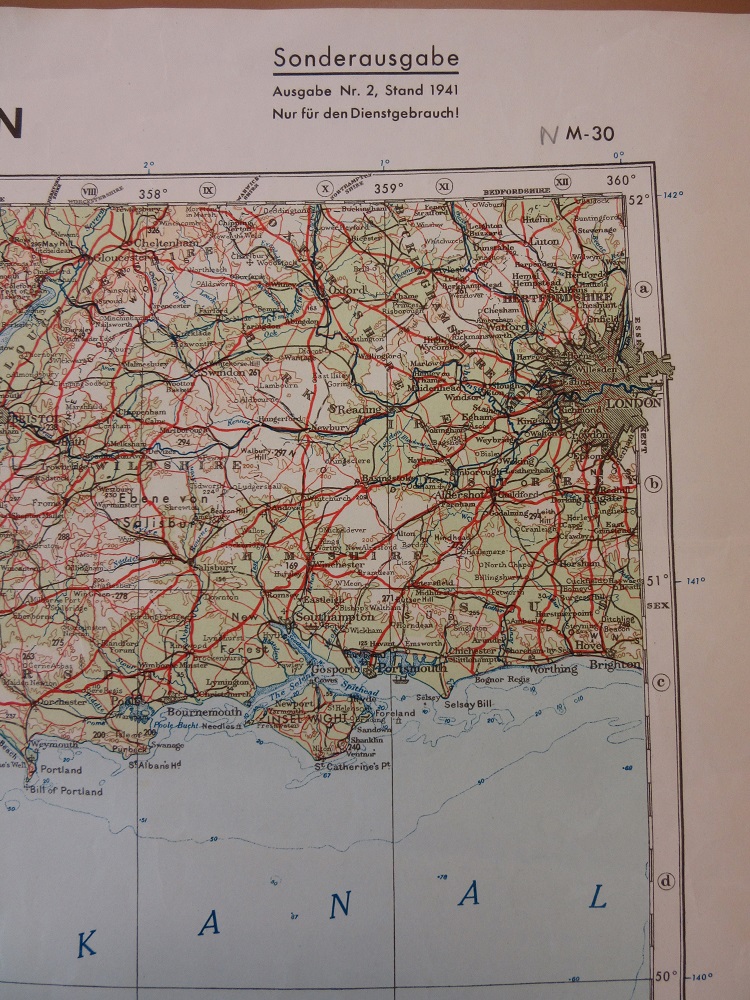 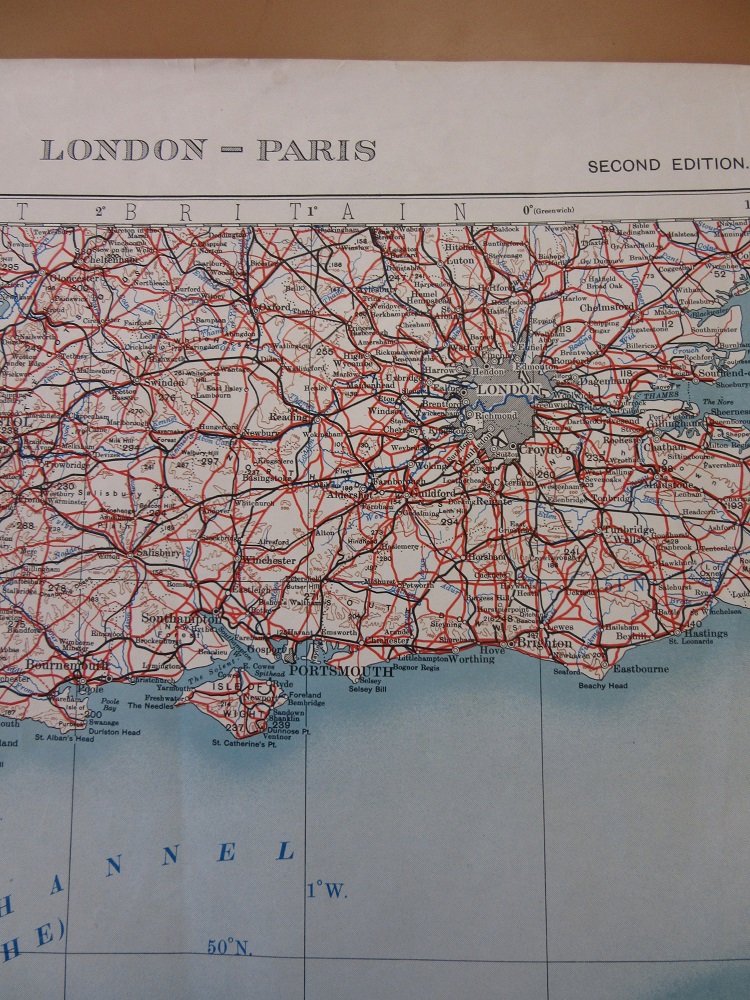 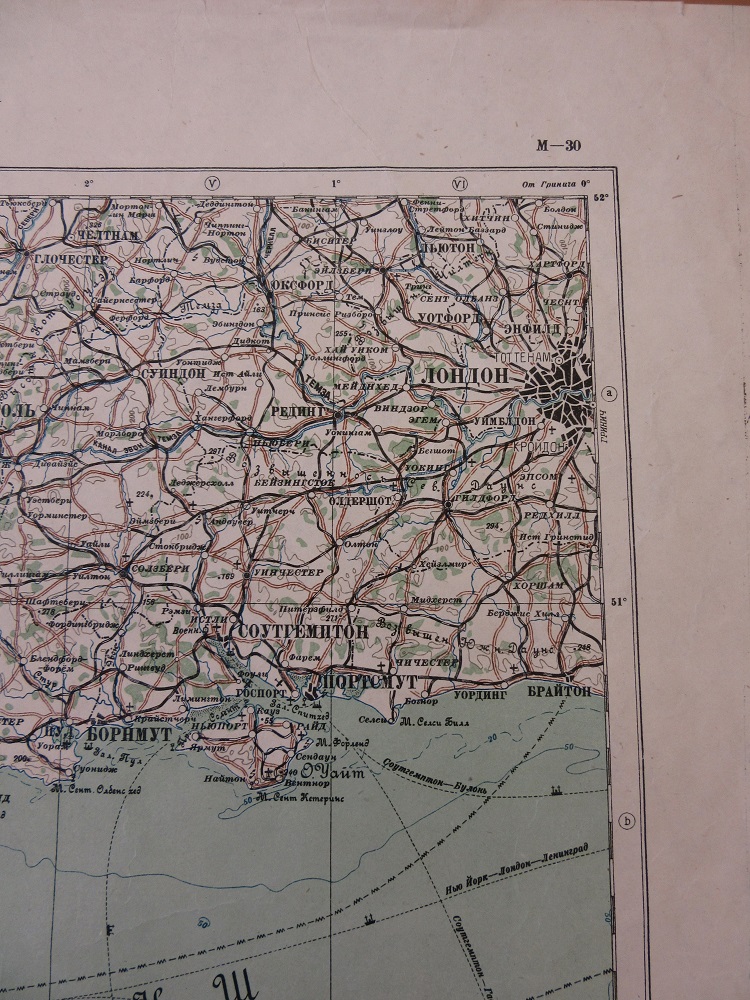 Stalingrad is of course most famous as one of the major battlegrounds of the Second World War. Situated on the western bank of the Volga River, with a large industrial output and a key strategic position controlling the river traffic to central Russia, the battle for the city started in August 1942 and lasted 5 months. After initial heavy losses Russian troops were able to re-group in the country to the east of the river and in a large pincer movement encircle German troops in November. This map of the city is printed on the reverse of a general series of maps of Eastern Europe published in 1942 by the German Army. The main map features, as well as the map itself, a large amount of text on the landscape, transport network and population of the area shown on each sheet. On reverse the town plans has further text on the city shown, with an index of crucial points. 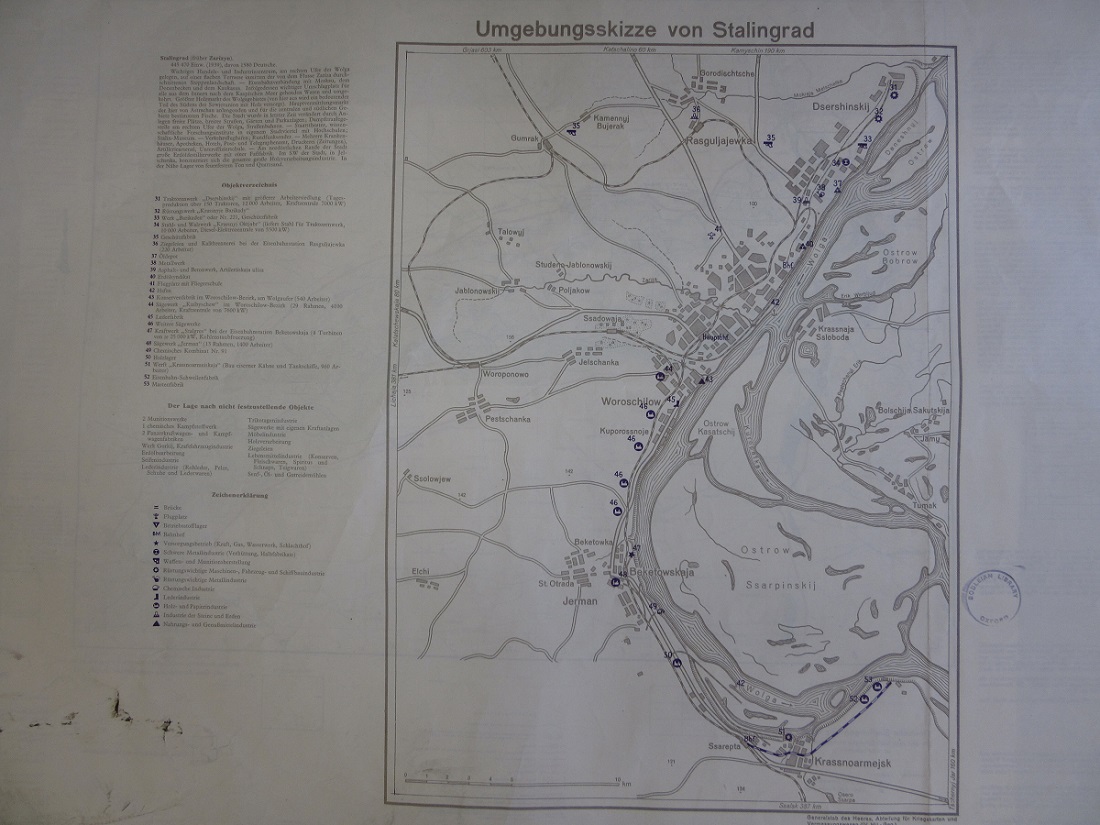