Images to celebrate Christmas from the Map Department in the Bodleian. The first two come from a book, Baedeker’s Guide to Palestine and Syria, published in 1898. These are the earliest maps held in the Bodleian for Bethlehem Bethlehem, from Baedeker’s Guide to Palestine and Syria, 20606 f.7

At the time the guide was published Bethlehem was predominately a Christian community. Numerous churches and monasteries existed in the town but the most important of all was the 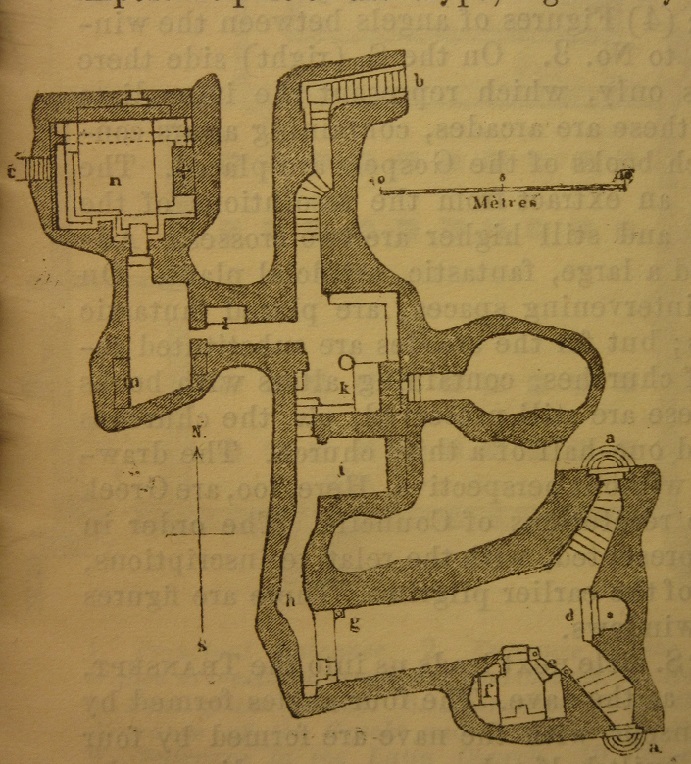 church first built in the 330’s over the cave of the nativity, now called the Church of the Nativity but on the plan called the Church of St Mary. The Church was, and still is, an important place of pilgrimage and the guide gives a number of pages to its description, with text and plans, including this one of the crypt, with ‘d’ representing the site of the nativity. The guide is full of fascinating plans and descriptions of the Holy sites; Christian, Muslim and Jewish, throughout the area, and the Library holds a large number of Baedeker’s of many countries and regions throughout the world.

The second set of images comes from a facsimile of a celebrated atlas of the Heavens, the Harmonia Macrocosmica, by Andreas Cellarius,  first published in Amsterdam in 1660. Cellarius was a Dutch mathematician and cartographer, and as with similar atlases of the time Cellarius’s work is a mixture of the classical and the modern. Classical with the inclusion of maps of the zodiac and the layout of the planets according to Ptolemy, modern with the inclusion of maps showing the theories of the solar system by astronomers such as Nicolaus Copernicus and Tycho Brahe and planetary motion around the earth, the phases of the moon and the sun’s journey in the sky.  This image is of the second of the Biblical star charts 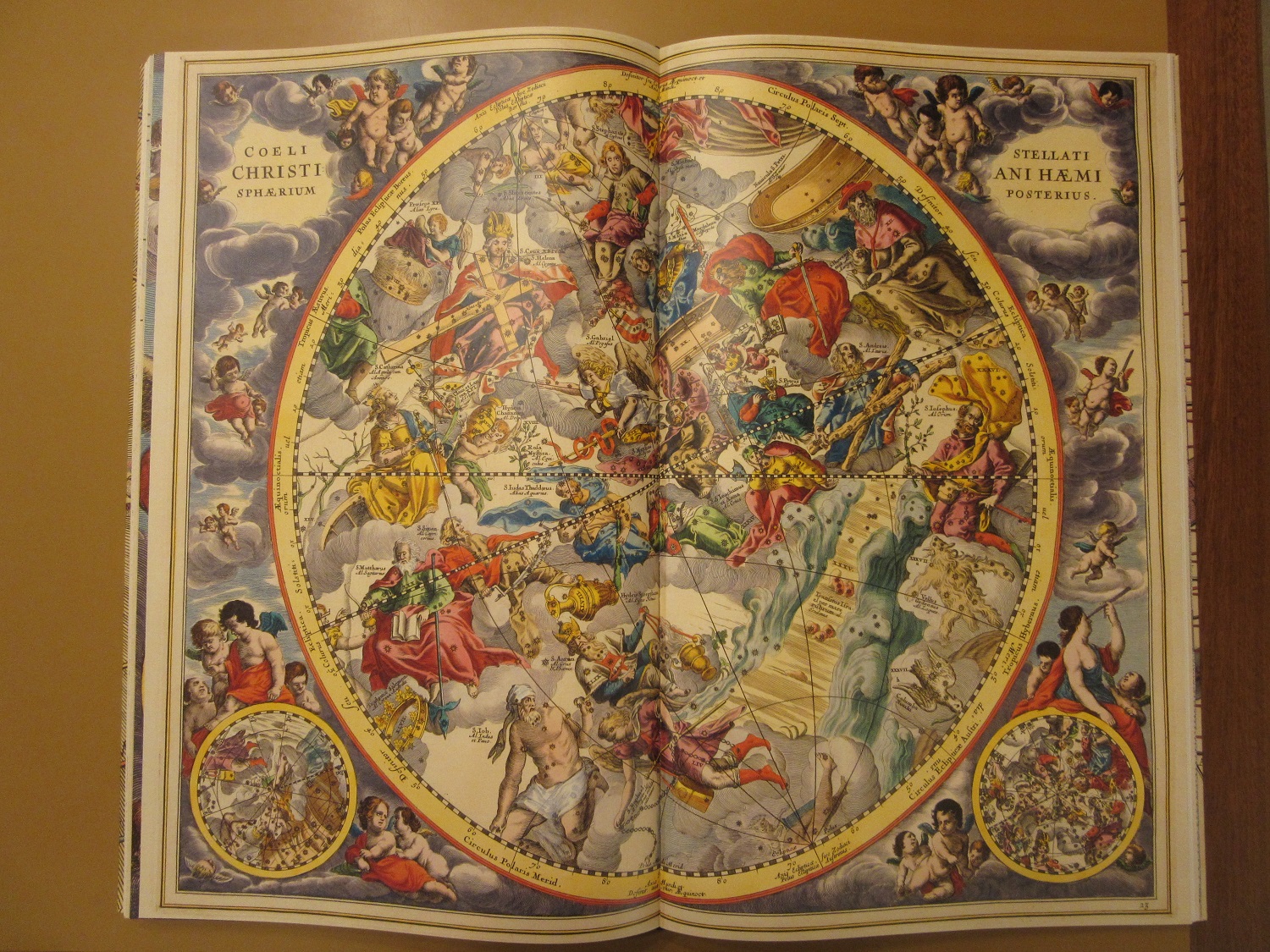 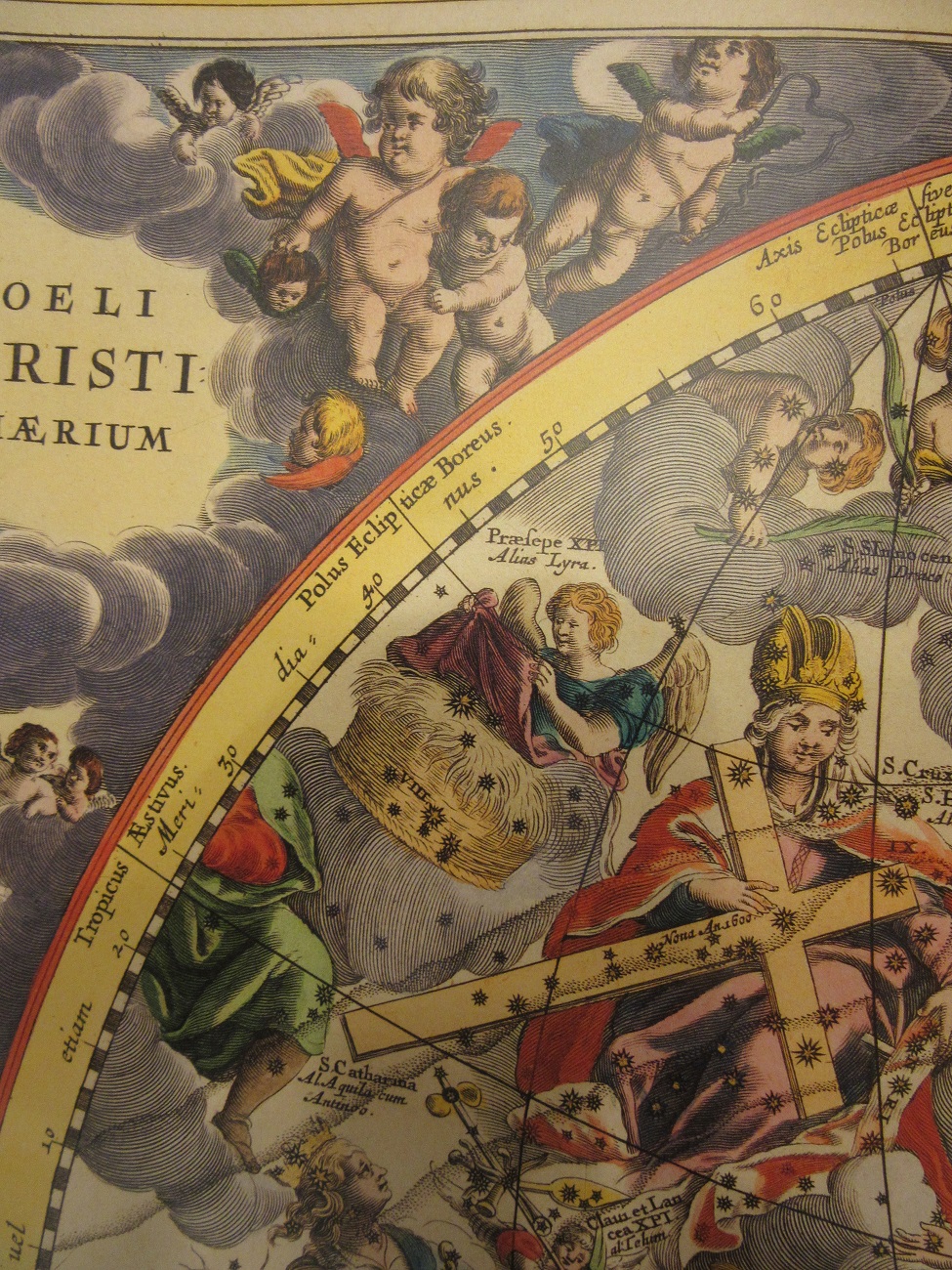 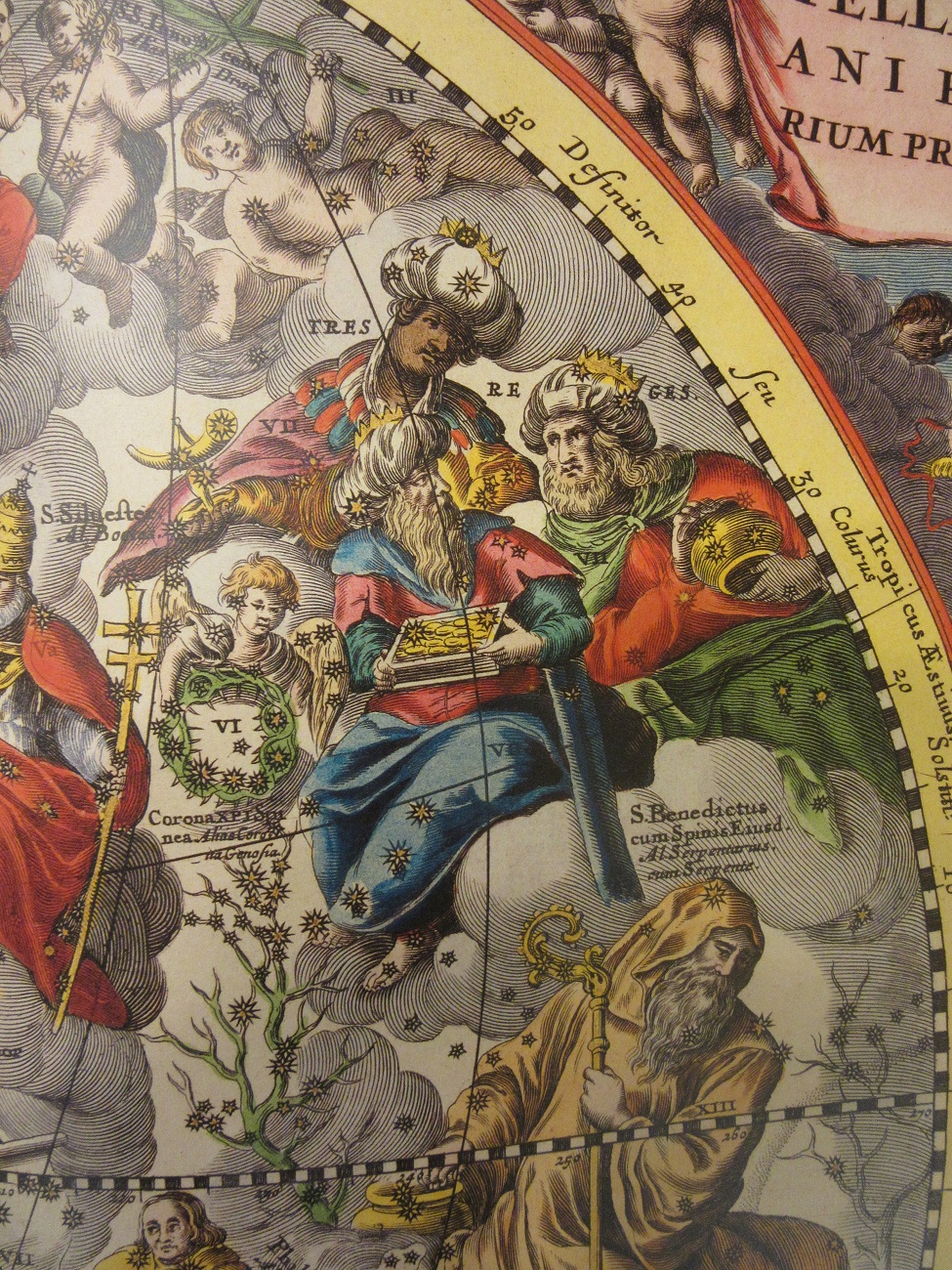 These images are from a facsimile of Andreas Cellarius’s Atlas Coelestis seu Harmonia Macrocosmica held on the open shelves in the map section of the Rare Books Reading Room in the Weston Library. G1 A1.2

Finally a puzzle. This map is one of a set of 12 covering an island which at first glance doesn’t seem to exist. The names do not appear on any gazetteer or atlas index. Created by the Canadian Military for planning purposes during the Second World War the maps have for a long 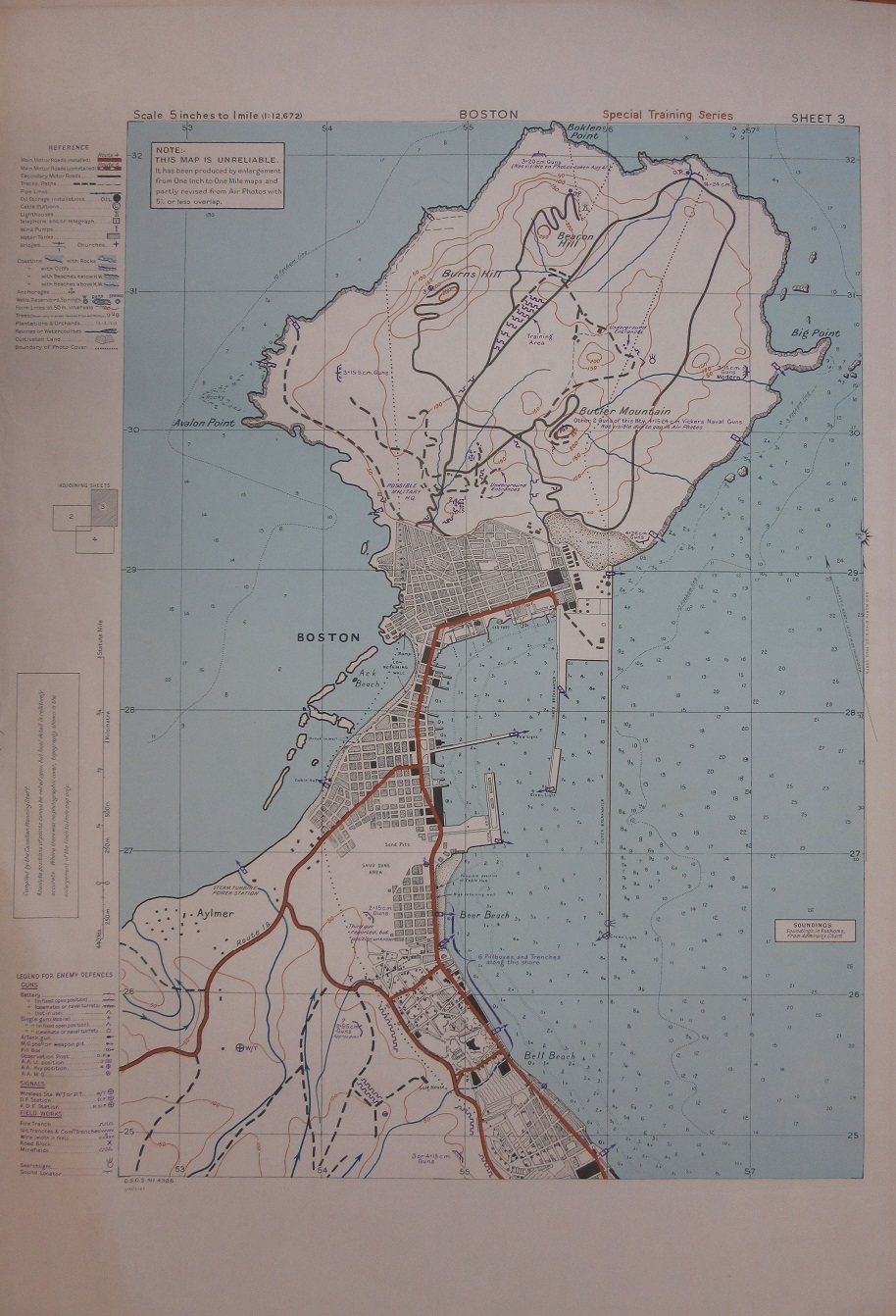 time been held in the Imaginary lands section of the map collection, a collection which includes maps of fictional places such as Middle Earth, Sodor, Ambridge and Emmerdale. It was only recently when going through this group of maps for an exhibition that staff looked at these 12 maps more closely and became convinced that the topography was real, but the names given weren’t. The defences, in purple, were too accurate, with notes saying ‘Third gun reported, but position unknown’, and then the note to the top, ‘This map is unreliable. It has been produced by enlargement from One inch to One miles maps…’. Of course this could have all been part of the deception, but there was enough there to make staff wonder. We’ve worked out where it is, can you? Email maps@bodleian.ox.ac.uk with an answer, no prizes, just the satisfaction of being right. Happy Christmas.

Now you see it, now you don’t.  Maps published by the Ordnance Survey from photographs taken by the RAF in the years after the Second World War were soon discovered to show on some sheets sensitive areas such as airfields and military bases. After putting these maps on general sale in the late 40’s it was quickly realised that having such material in the public domain 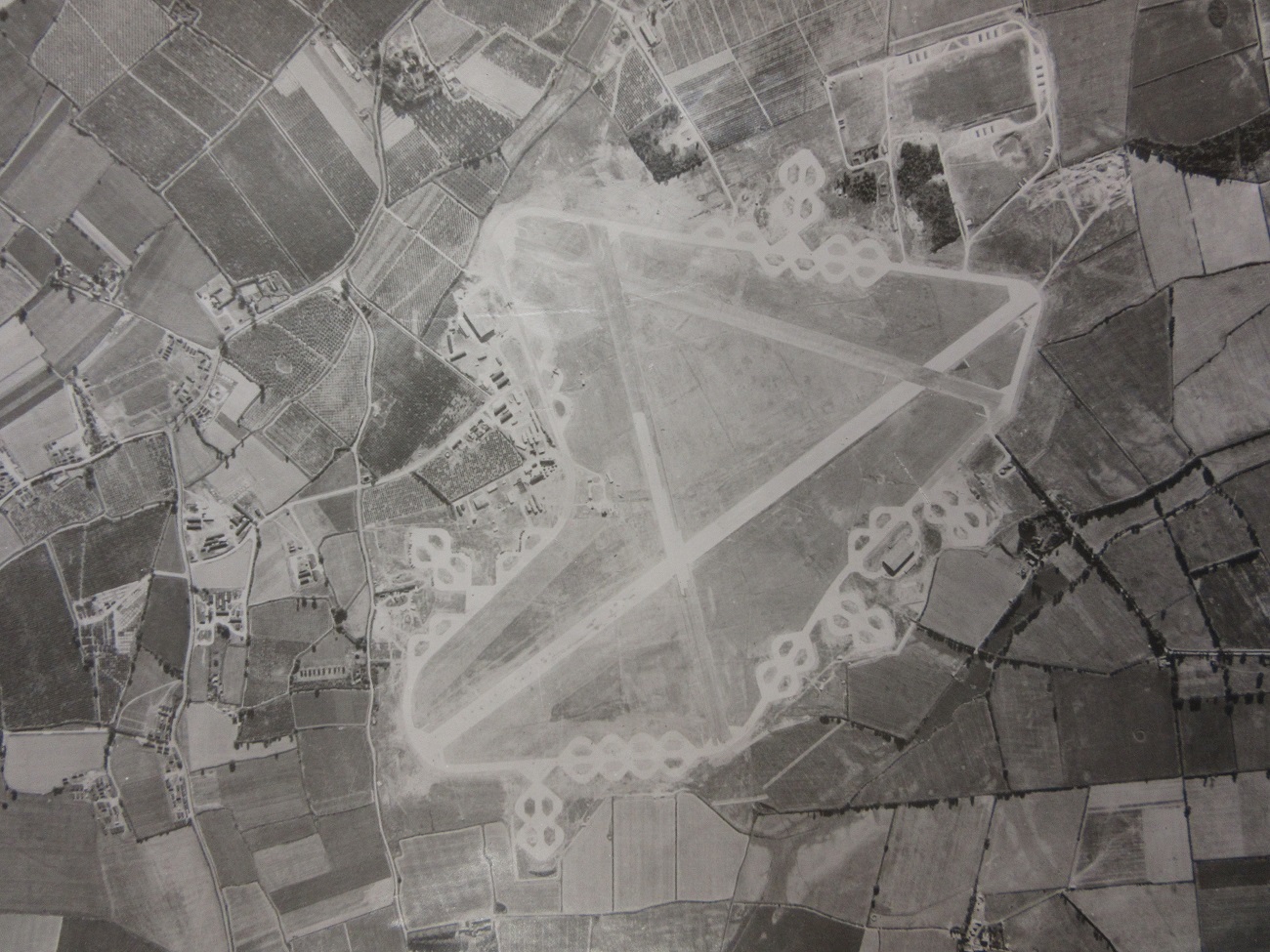 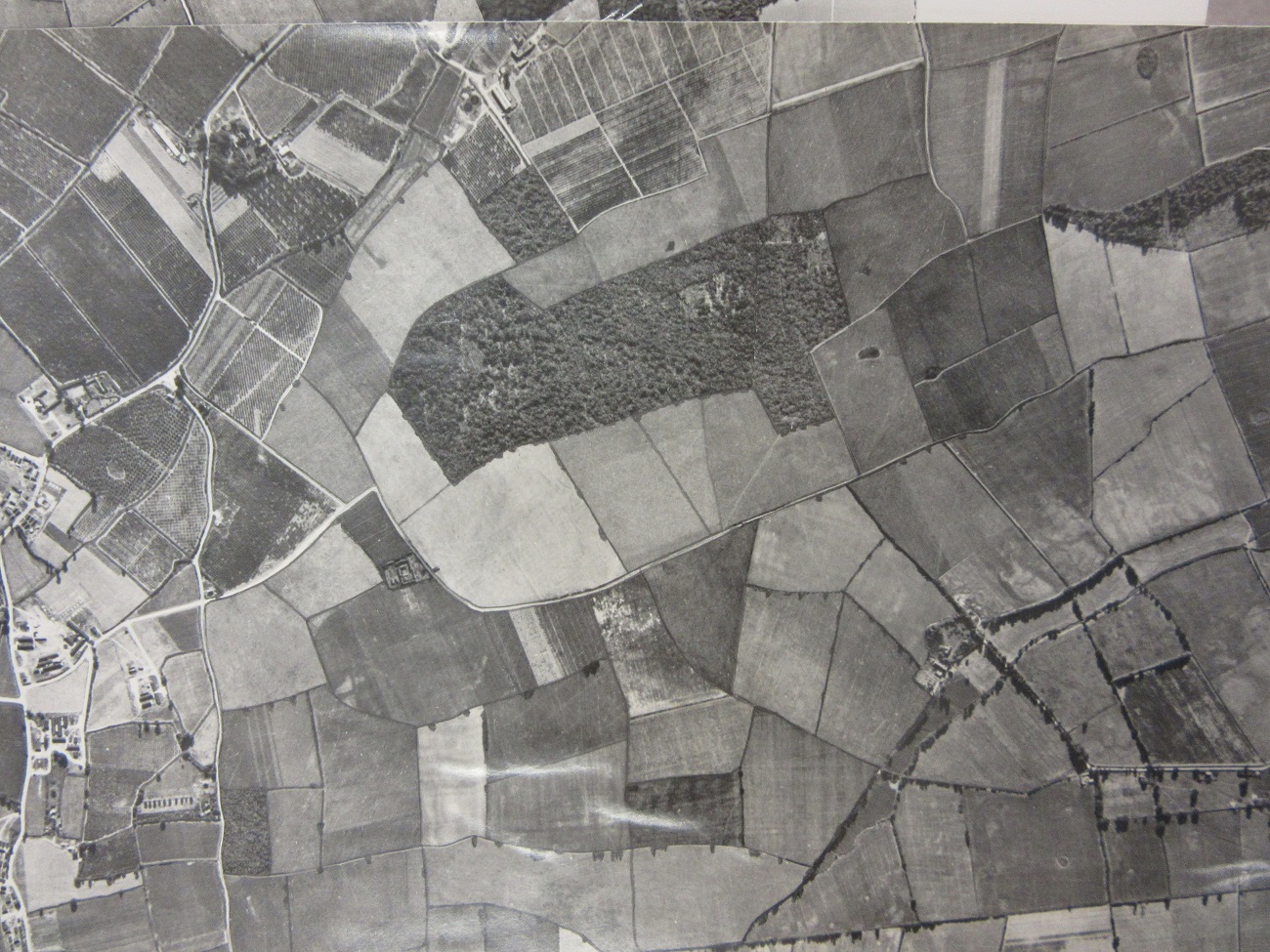 wasn’t such a good idea, and after withdrawing existing sheets new versions were printed which obscured the military sites with painted-in fields or, in some cases, photographing the existing sheets with cotton wool suspended over areas to be hidden. 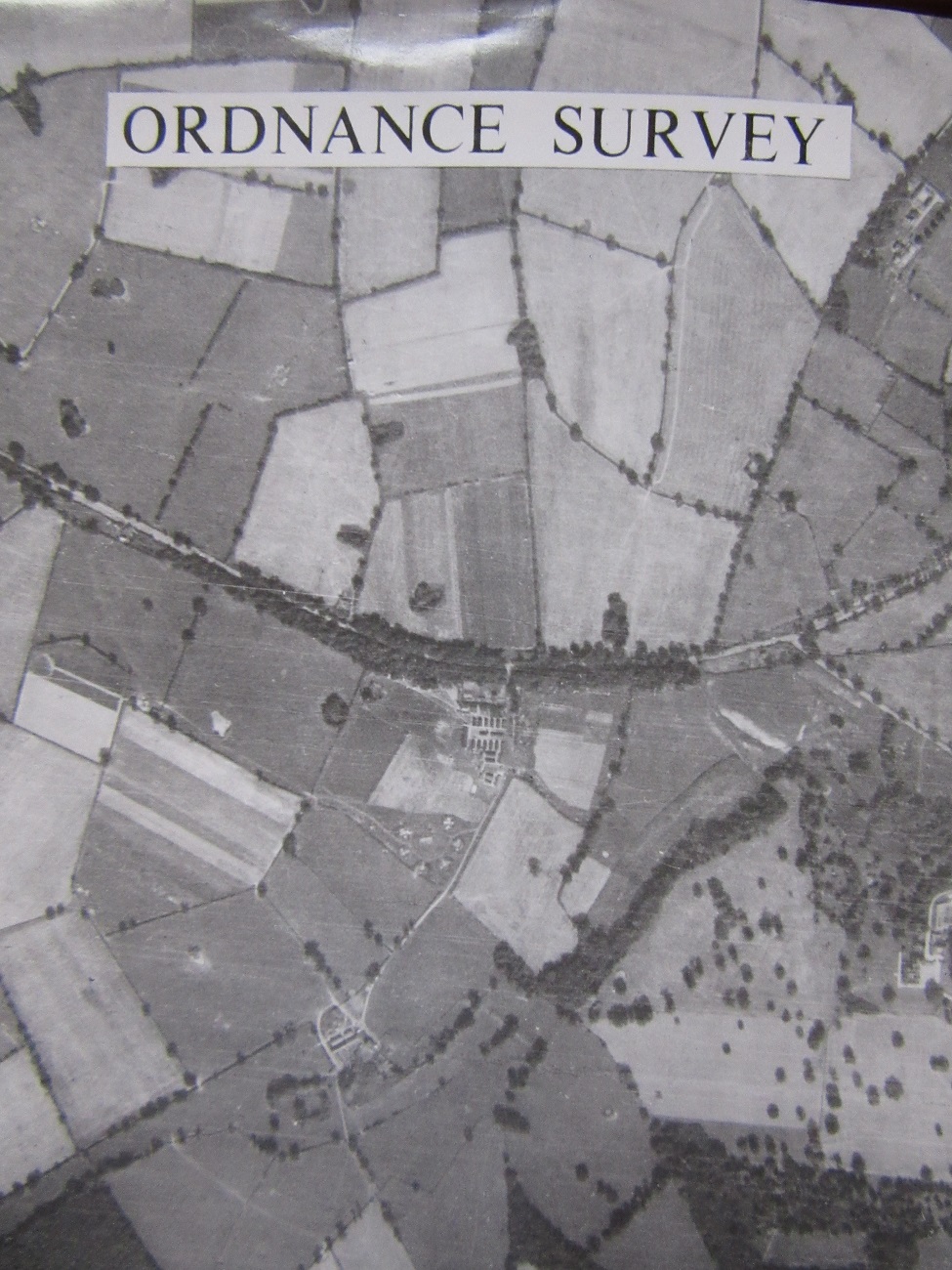 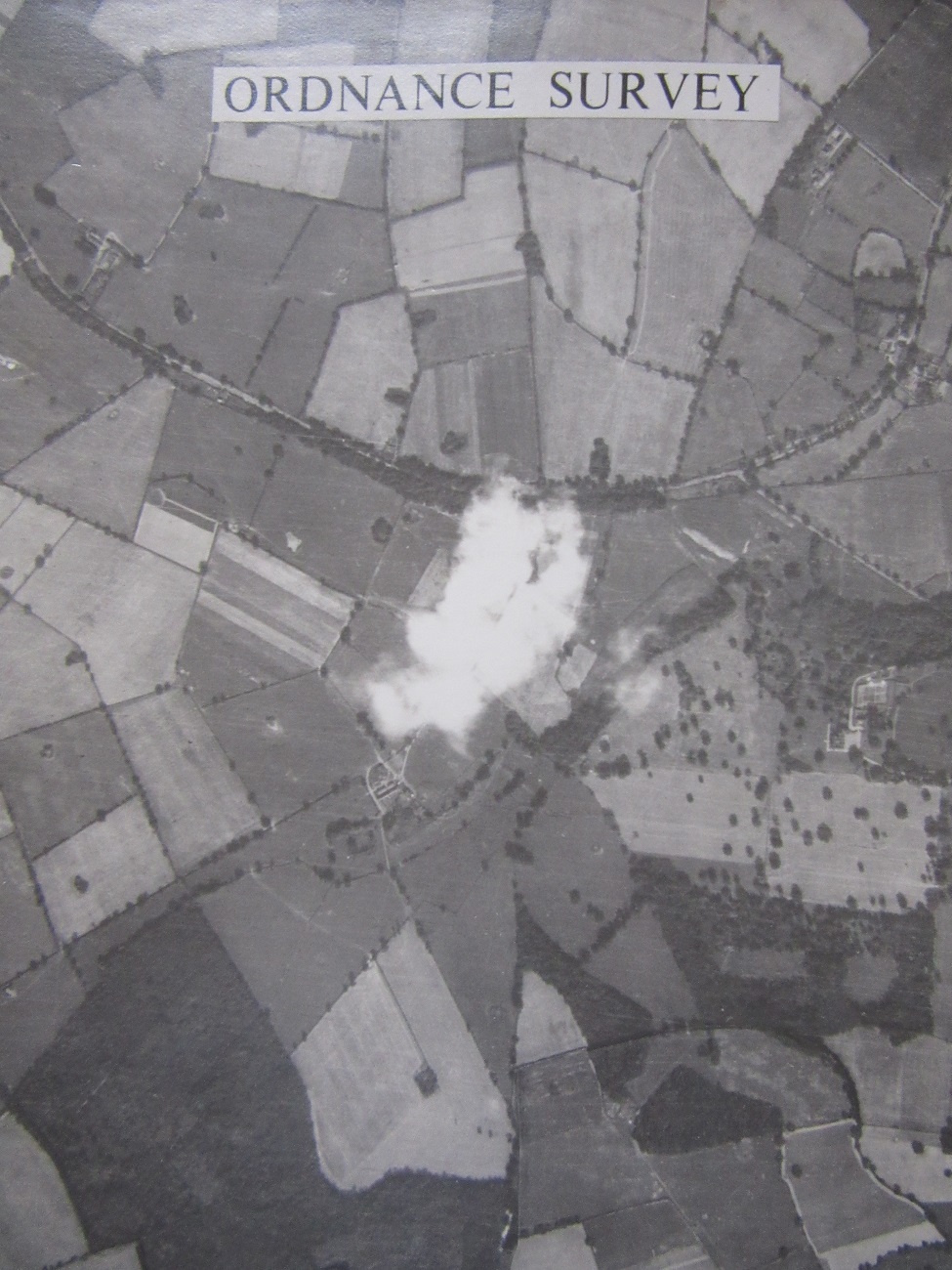 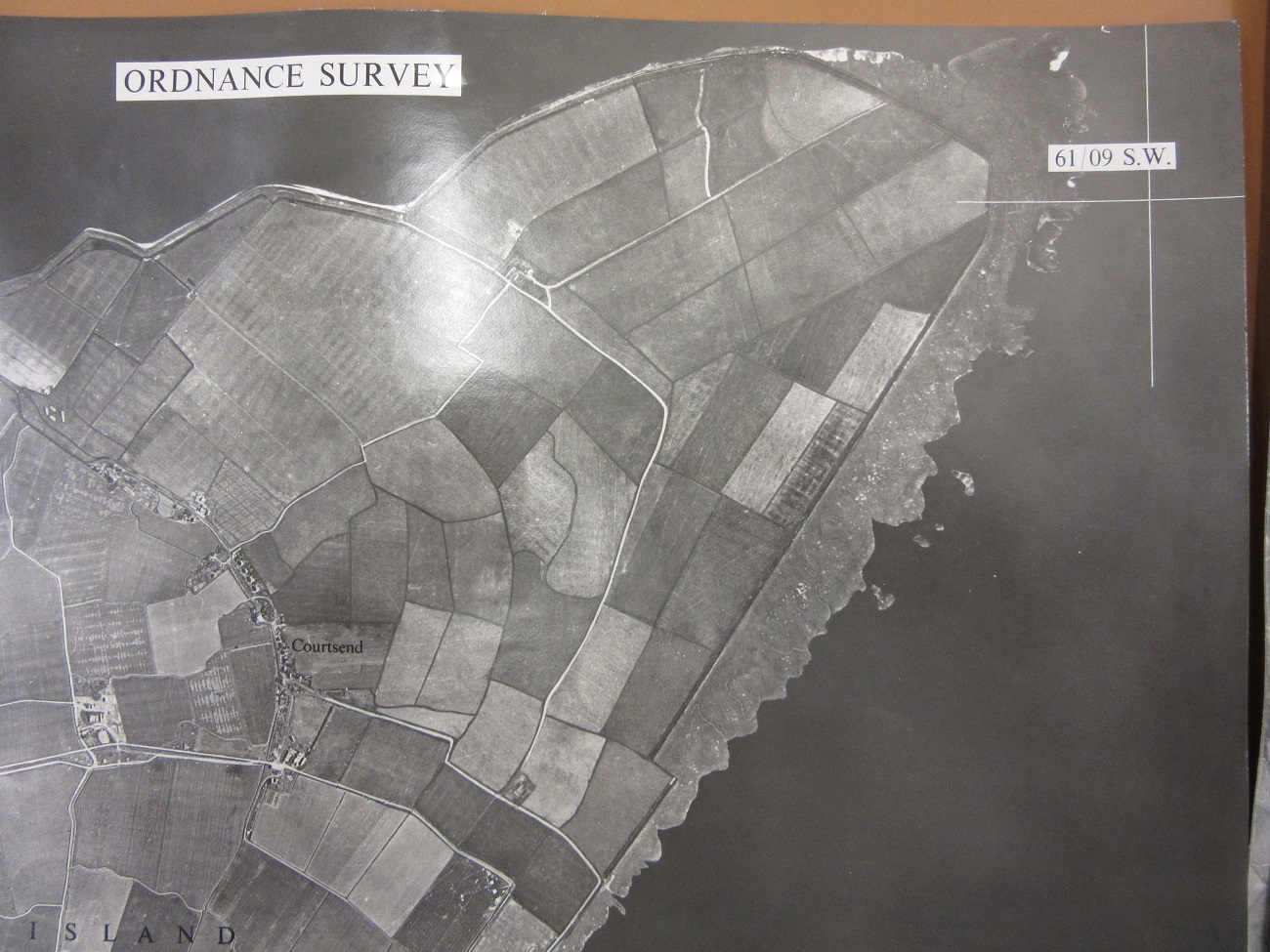 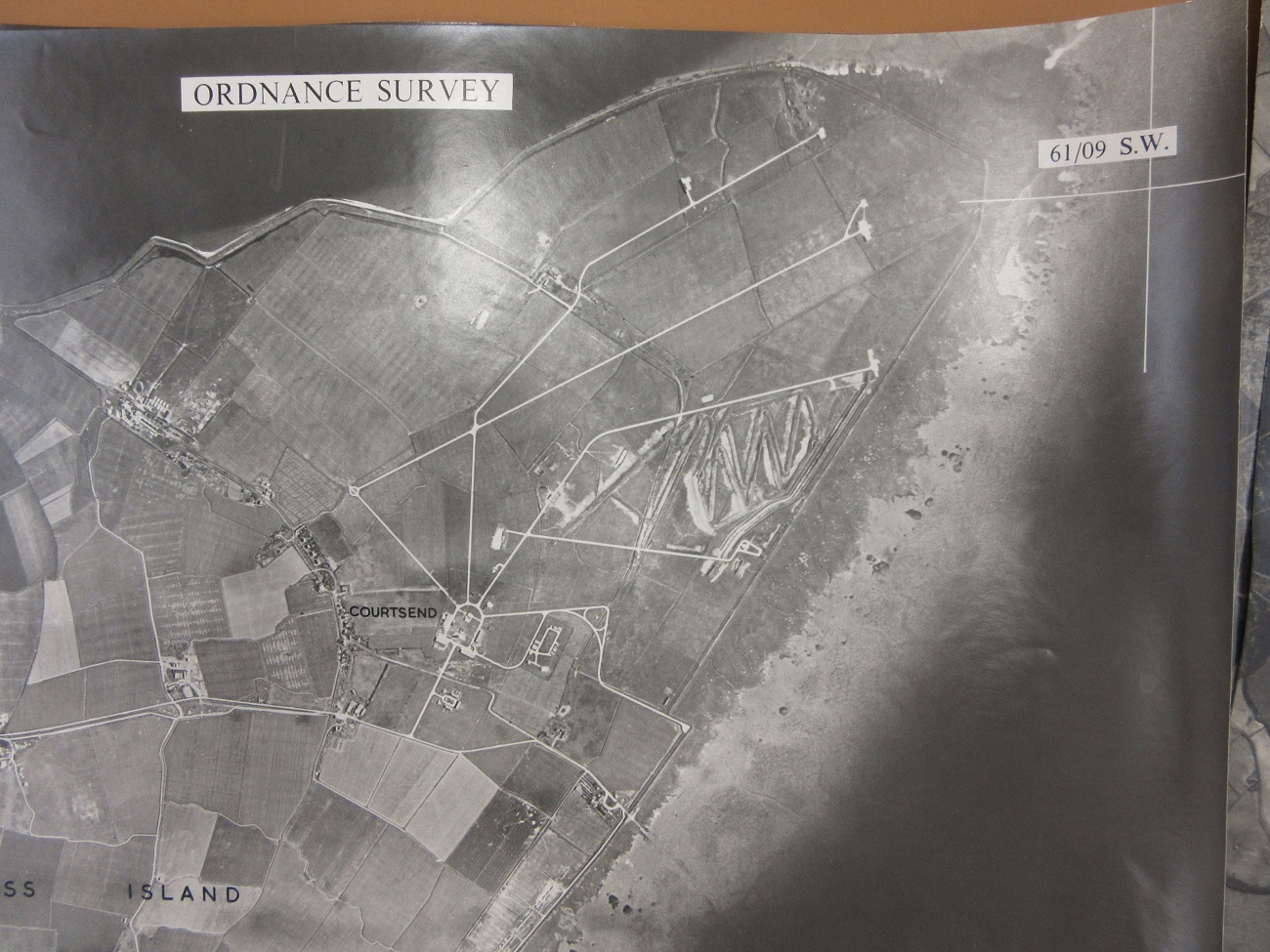 The maps were intended as an aid to town planning and reconstruction after the war and the examples shown here all date from 1947. For a long time copyright libraries such as the Bodleian and the British Library weren’t allowed to show the unedited maps to the public, a restriction only lifted in 1995.