Old maps of countries are often the cause of wistful thinking, it’s rare though that a map is produced for that very reason, as is the case with this map of pre-Second World War Eastern Germany. 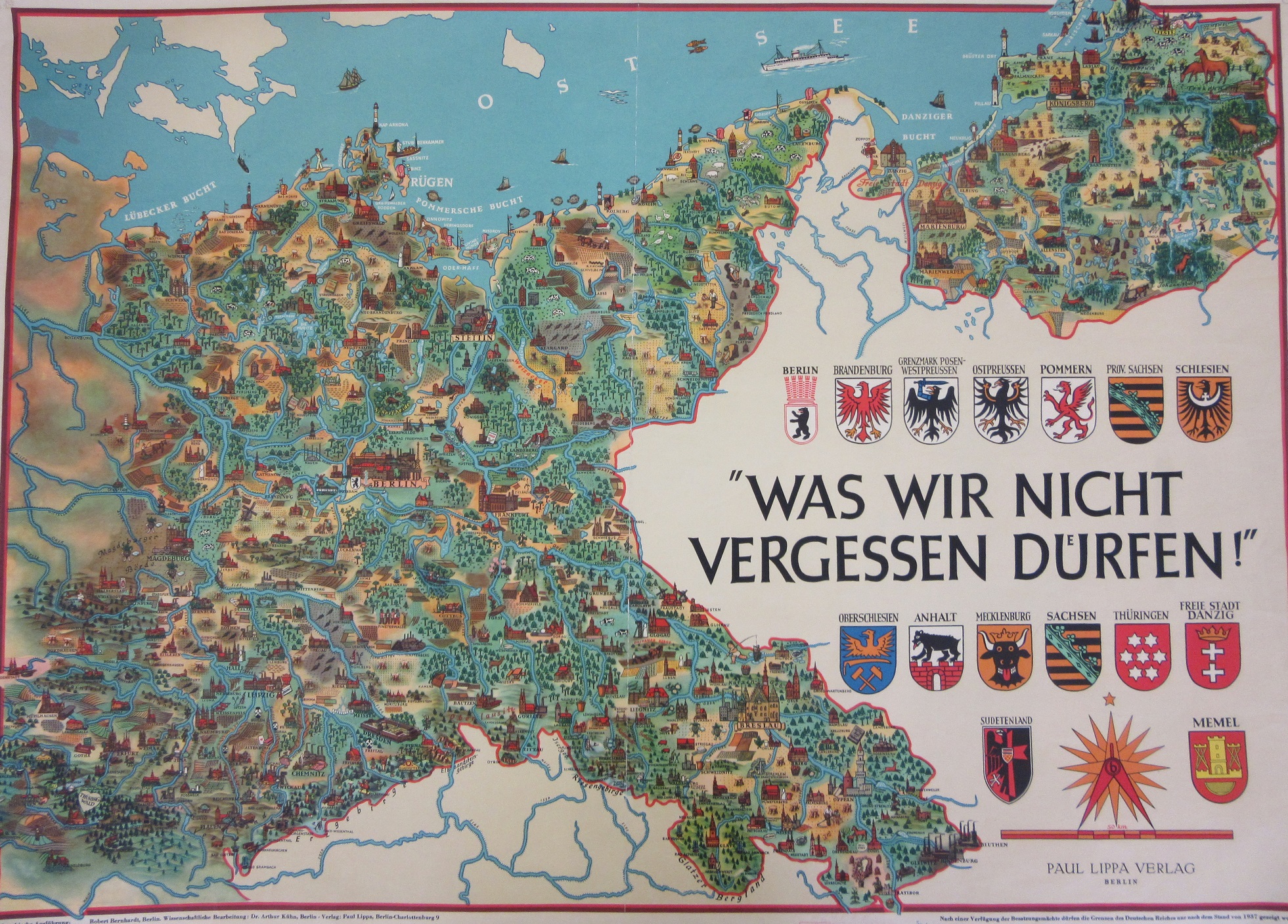 At the end of the war large numbers of German nationals were stranded in lands which were in the control of the Soviet Union or would become part of an enlarged Poland. They either fled or were expelled from these areas and found their way to West Germany. These 10 million exiles  – Vertriebene or expellees – formed into political groups. They tried to claim compensation for lost property  and kept the hopes of a reunified Germany alive, based on pre-war borders and  including East Prussia. This map, whose title can be translated as ‘Something we should not forget’, was probably produced in support of  these people. It was published in Berlin in 1957.

Few countries have had their borders changed by war as Germany. Originally a group of separate states the country unified after the Franco-Prussian War in 1870 and then lost territory after the First and Second World Wars. Land lost at the end of the Second World War is the reason for the map of remembrance featured here. 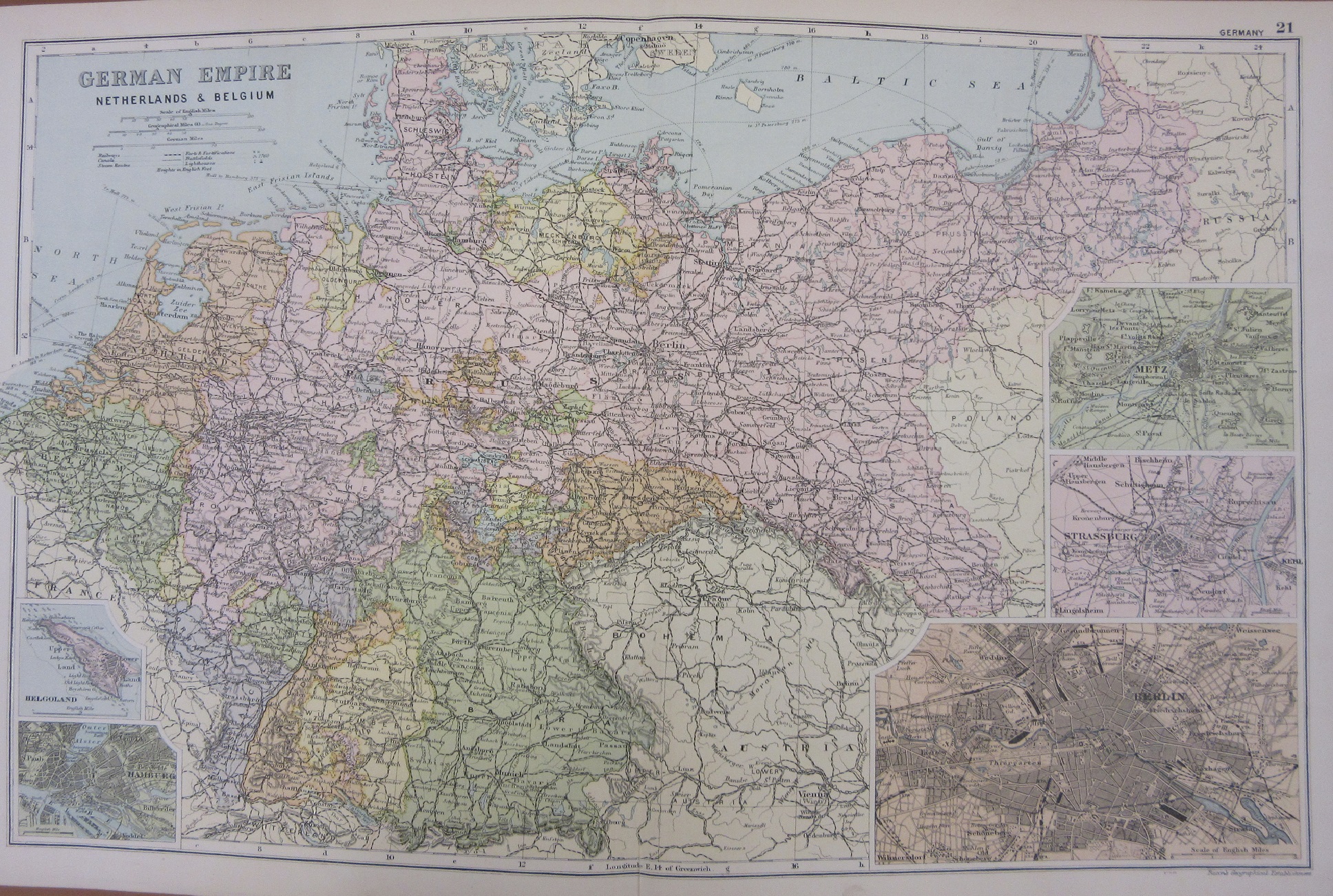 German Empire, Netherlands and Belgium from Bacon’s Popular Atlas of the World, 1909. G1 B1.52

This page from Bacon’s popular atlas shows Germany at its height, between the end of the Franco-Prussian war and the start of the First World War. 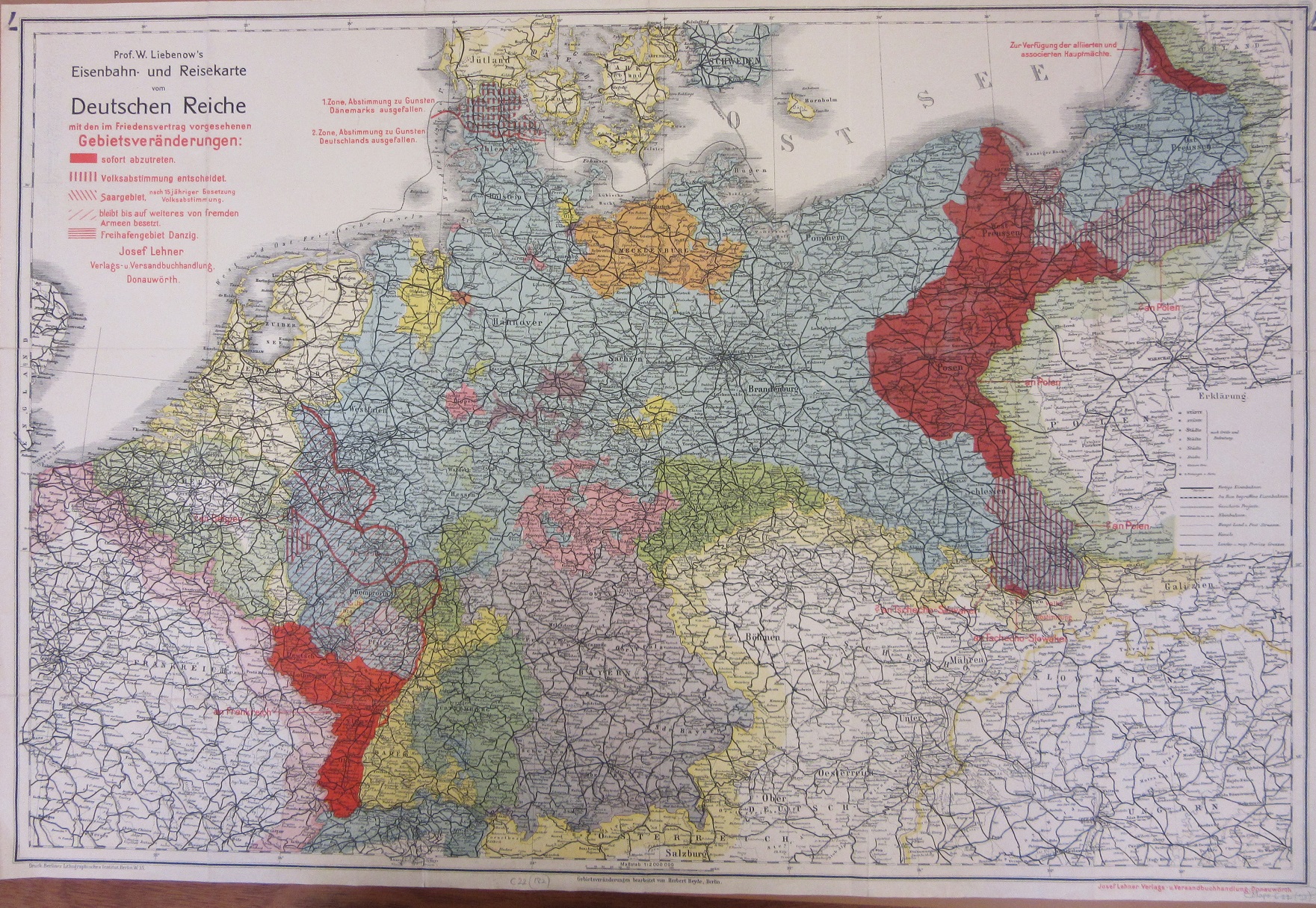 The map above, published in Berlin with the proposed changes from the Treaty of Versailles, has used an earlier pre-war railway map of Germany to show the changes to German territories from the Treaty of Versailles. Overprinting on existing maps is a common practice, saving on costs and, more importantly considering the dramatic changes taking place, time. The red area to the East would become the Polish corridor giving a previously land-locked country access to the sea. 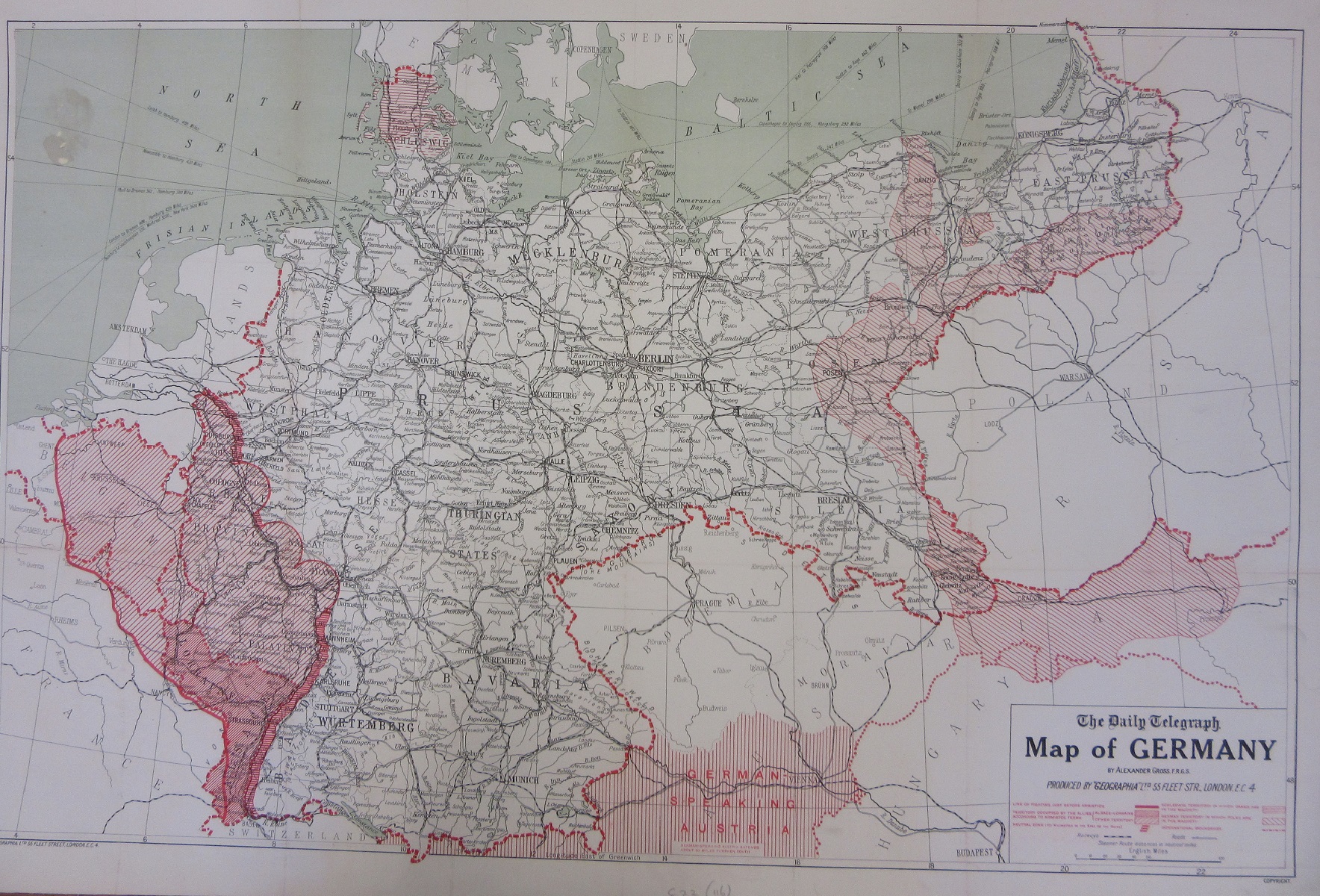 This map is an English version of the Deutschen Reiche map above. While similar In some aspects one important feature here is highlighting land where different nationals are prominent. Shading shows that the land that would become the Polish Corridor had a majority of Poles. 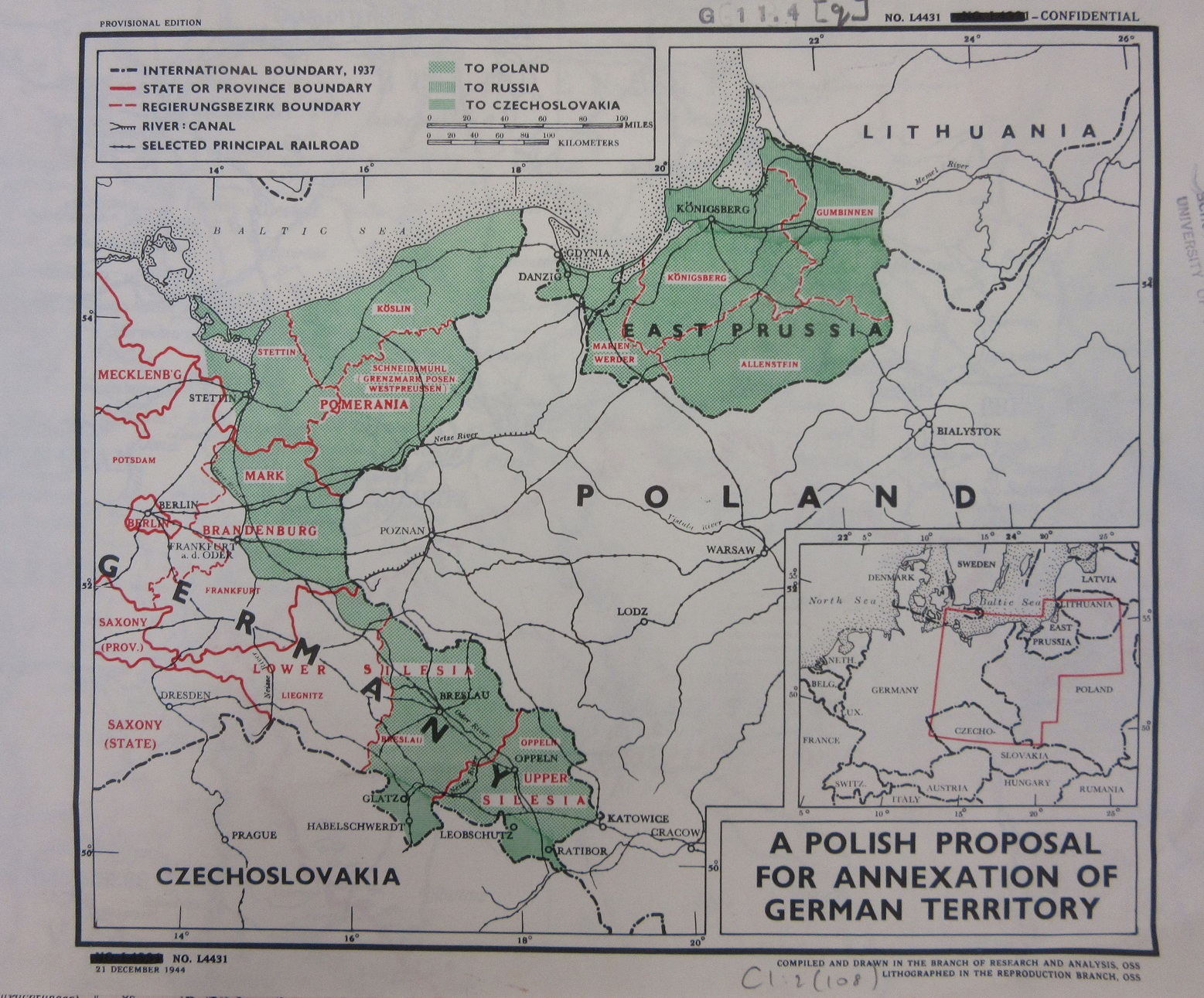 This map of the possible annexation of East German lands is published by the Office of Strategic Services, the Intelligence Department for the United States towards the end of the Second World War. The agency would evolve into the C.I.A.

The first map shown here is also an interesting example of a pictorial map. Pictorial maps ignore all but the most basic topographic detail but are richly decorated with pictures relating to the area shown.  As there would be little need to produce a practical map of an area which was off-limits this portrayal of land, industry and attractions  further emphasises the purpose of the map. 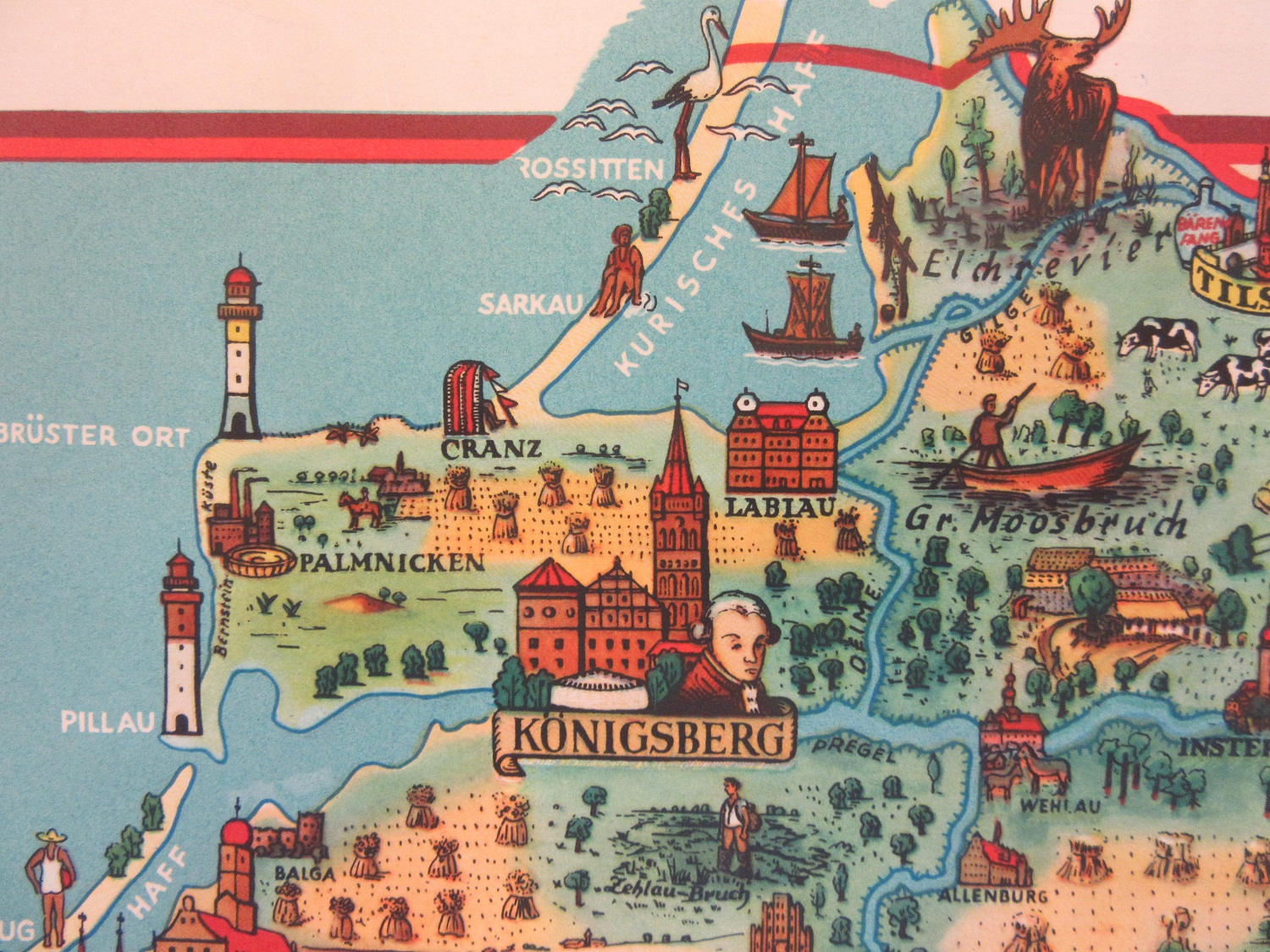 One thought on “Something we should not forget”