An unusual little map came to light recently following an enquiry from a reader. William Hole’s map of the archery marks in Finsbury Fields dates from the early seventeenth century and runs from Bunhill in the south to roughly the location of the current Regent’s Canal in the north.  The map names all of the archery targets in this open space which until 1498 was garden and orchard enclosures.   These were removed to turn it into a practice ground for archers, a

popular, and legally required pursuit for men.  It is a rare thing, with only a couple of other examples in the Guildhall Library and Bethlem Royal Hospital.  The format of being pasted onto two pieces of oak board which could be folded to makes it both durable and portable, indeed there are the remains of hook and eye clasps which would have locked the boards together. Later in its life, it had a black roan cover and wallet-style case to protect it. 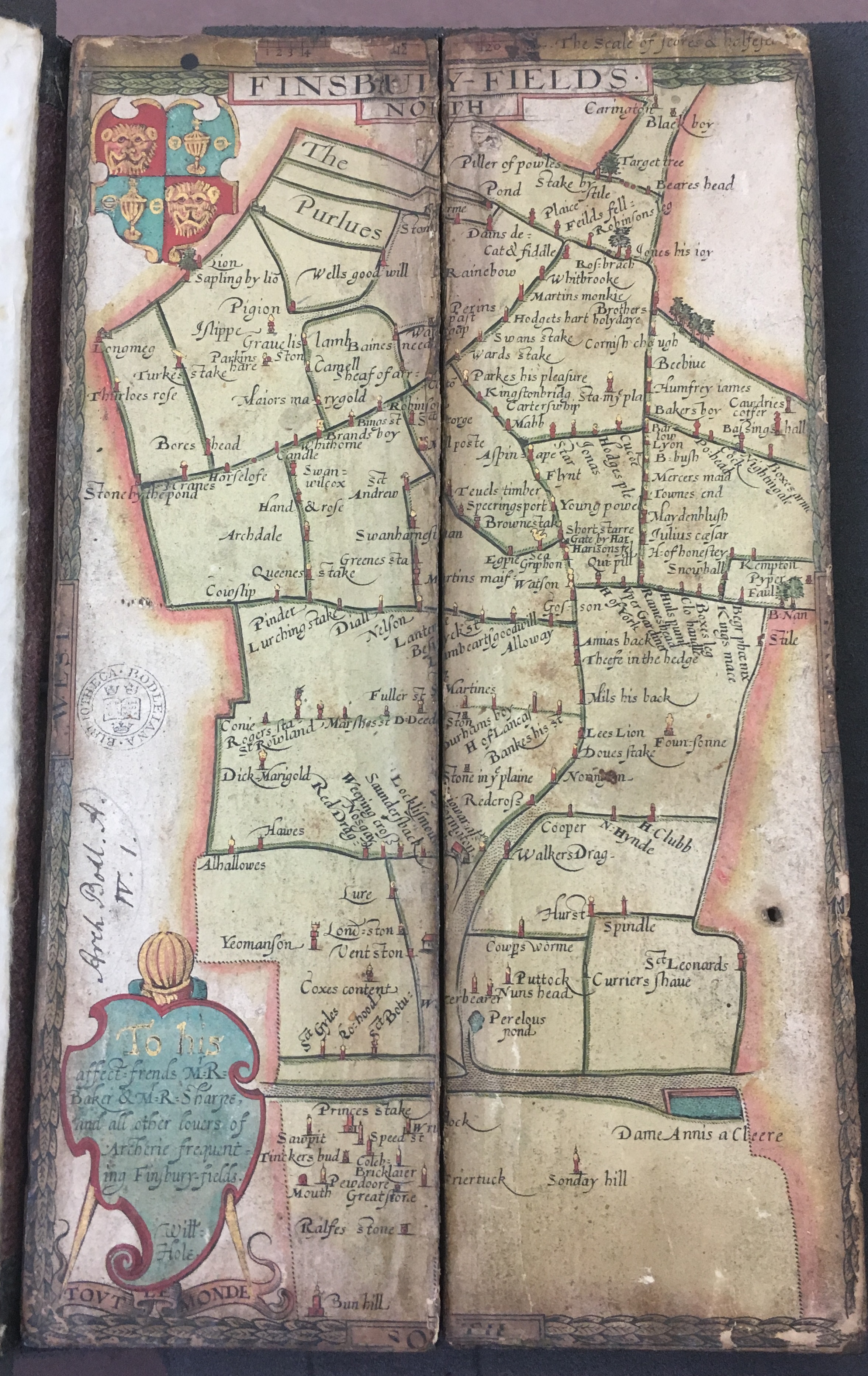 Some of the archery targets are named after physical features, such as Sonday Hill and Stone in ye plaine, or people (Dick Marigold). Notable other places on the map include the well of Dame Agnes Clare “all that well comonly called or knowne by the name of Dame Anne A Cleere invironed aboute with a brickwall, scituate, lying and being on the late King’s waste . . . in a certaine higheway leading from a certaine streete called Old Streete towardes Shoreditch. 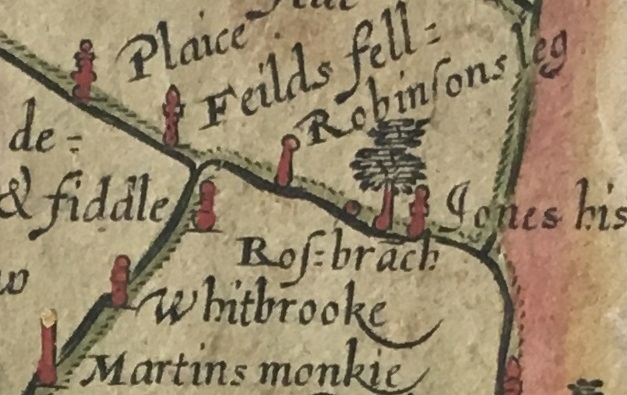 ” which can clearly be seen towards the bottom of the map.  Much further north is a butt named “Ros:brach” which could feasibly mark the Rosemary Branch inn which is the only building known to have existed away from town at this period. Allegedly it was a meeting place for Levellers a few years later, each identifying themselves with bunches of rosemary in their hats.  Now the area is marked by the Rosemary Branch pub and theatre which was rebuilt after a fire in 1783 destroyed the original building.

William Hole was an etcher and engraver who was born near Leeds. Although known for producing maps, he was also a distinguished engraver of portraits and music.  This little map has a more personal, almost playful feel, dedicating it “To his affect: frends M:R: Bake & M:R Sharpe, and all other louers of Archerie frequenting Finsbury-fields” so may not have been produced as a 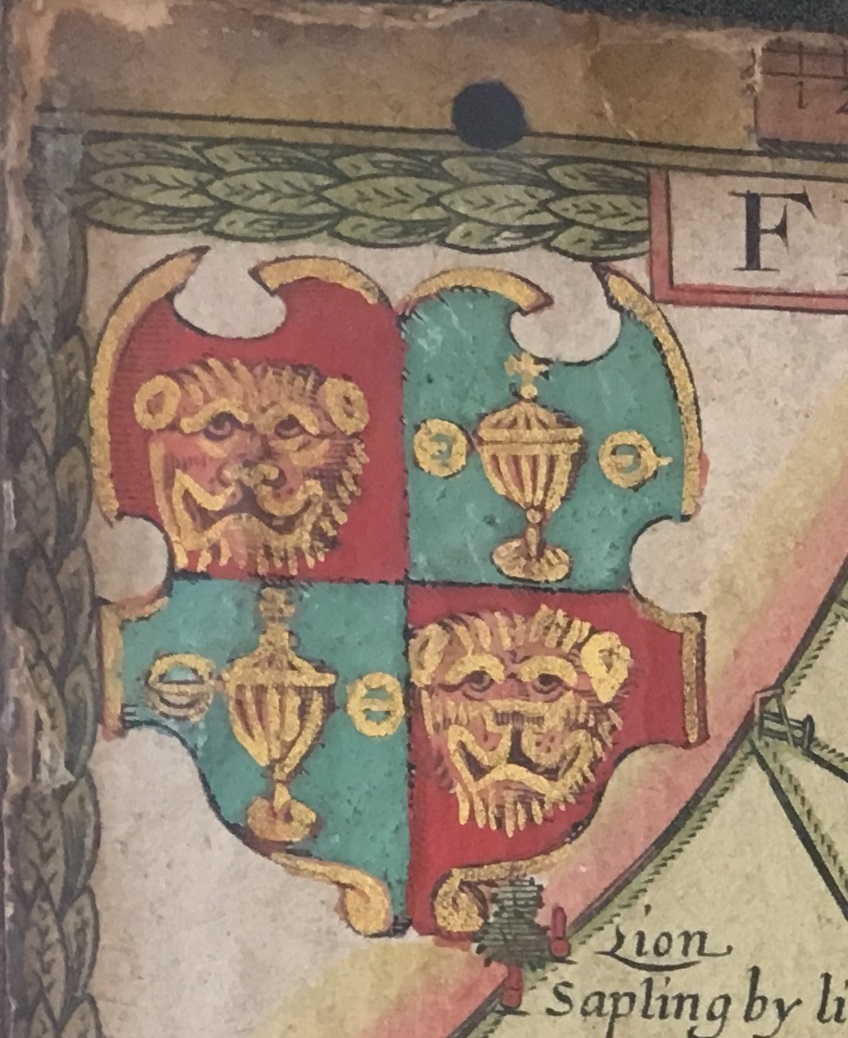 commercial venture.  However, judging by the map symbols for the targets, being denoted by the common graphic of a dot in a circle, it looks like the map was accurately surveyed by a plane table or similar device.  The scale of scores and half scores is unusual too and I can’t find any reference to the length of a score. Also, Hole included the arms of the Worshipful Company of Goldsmiths in top left corner, of which he was a member.  It is also rather difficult to date with any certainty and only that it appeared sometime between 1605 and his death in 1624.

The map was then traced or copied for inclusion in James Peller Malcolm’s Londinium Redivivum, or, an ancient history and modern description of London published in 1807. It is these copies which are more common with examples in libraries all over the world. However, on these tracings and facsimiles the compass points east, south and west are not noted leading to these works having the erroneous title Finsbury Fields North, as on the original the four compass points are clearly shown. In 1856 John Williams wrote a carefully researched article for the Proceedings of the Society of Antiquaries of London comparing the names of map’s archery marks with a manuscript list in the Society of Antiquaries.

Fold it up, pop it in your quiver and off you go for an afternoon’s archery in Finsbury Fields.

Changes in British social and economic landscape in the years leading up to the publication of this map of Emigration in 1851 were immense. The increase in population which saw an estimated 9.5 million in 1700 grow to over 27 million in 1841, the growth of the railways in the early 1800s and the movement into towns following the Industrial Revolution led to an  over-crowded and polluted existence for many. 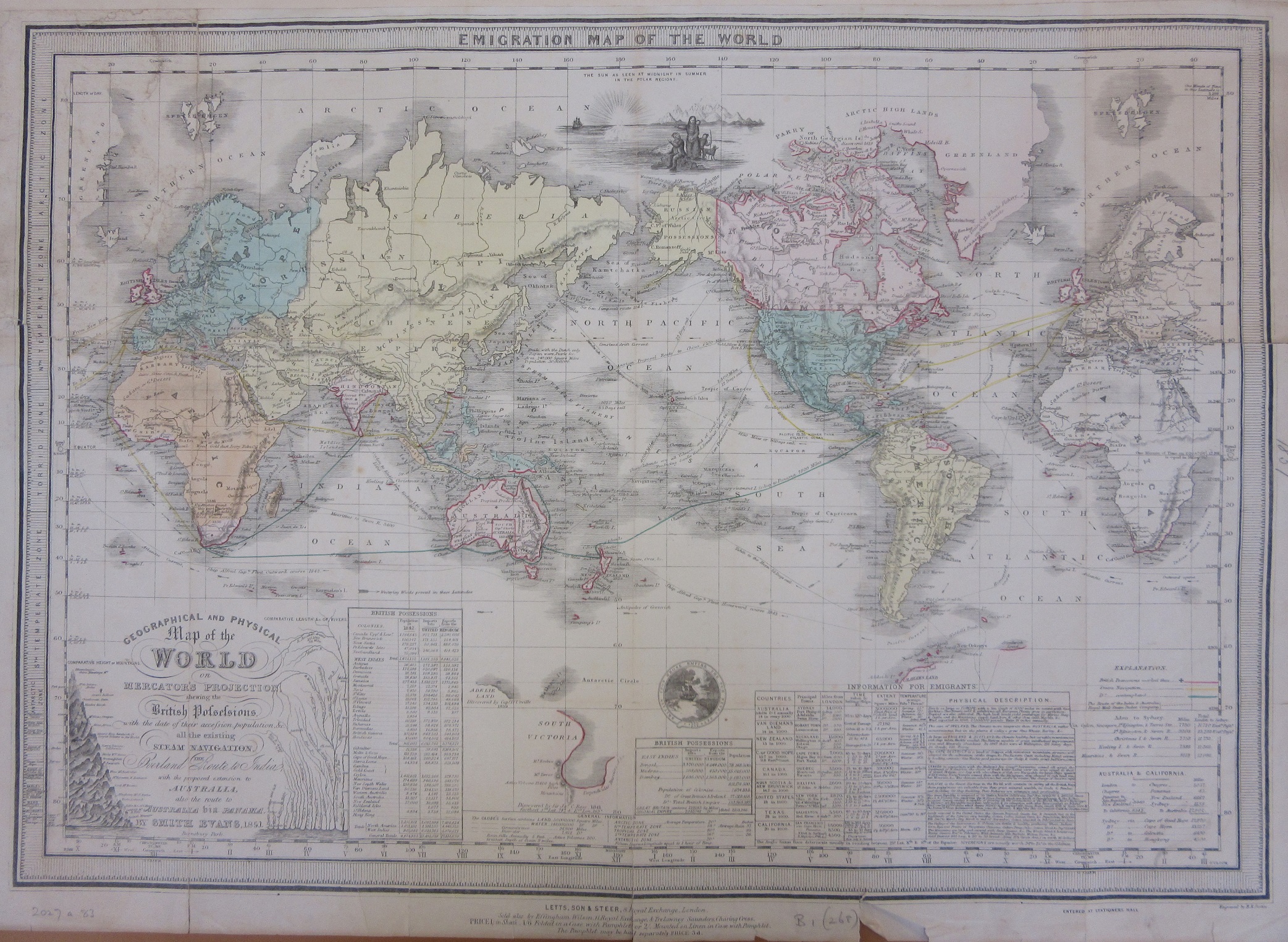 Britain had become a colonial power in the W 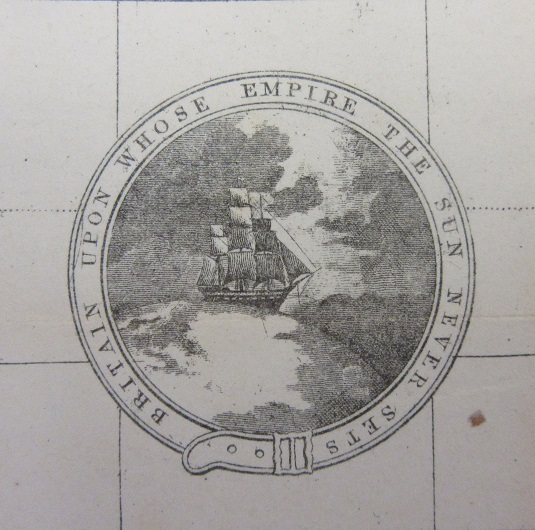 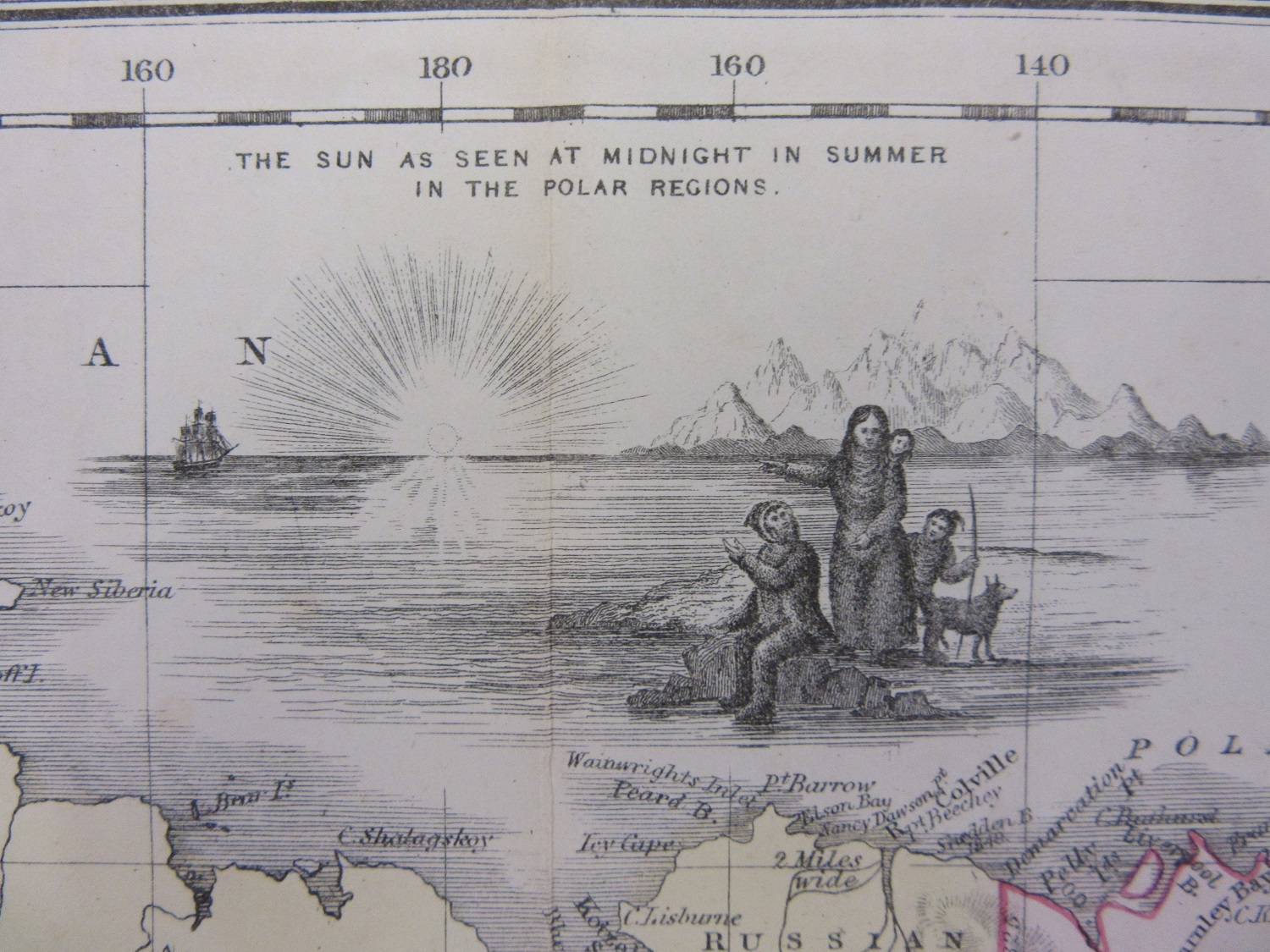 This is map has a number of interesting features. The centring of the map is unusual, as is the doubling up of most of the landmass. This is done to show routes to and from British ports without having to break routes up at the edge of the map. The Britain on the right covers the routes to America while the Britain on the left has routes to the East and then onto Australia, across the Pacific and then overland across the narrow isthmus in Panama (it was another 65 years before the Panama Canal would open in 1914) and then across the Atlantic to home.  A steamship journey from Southampton round 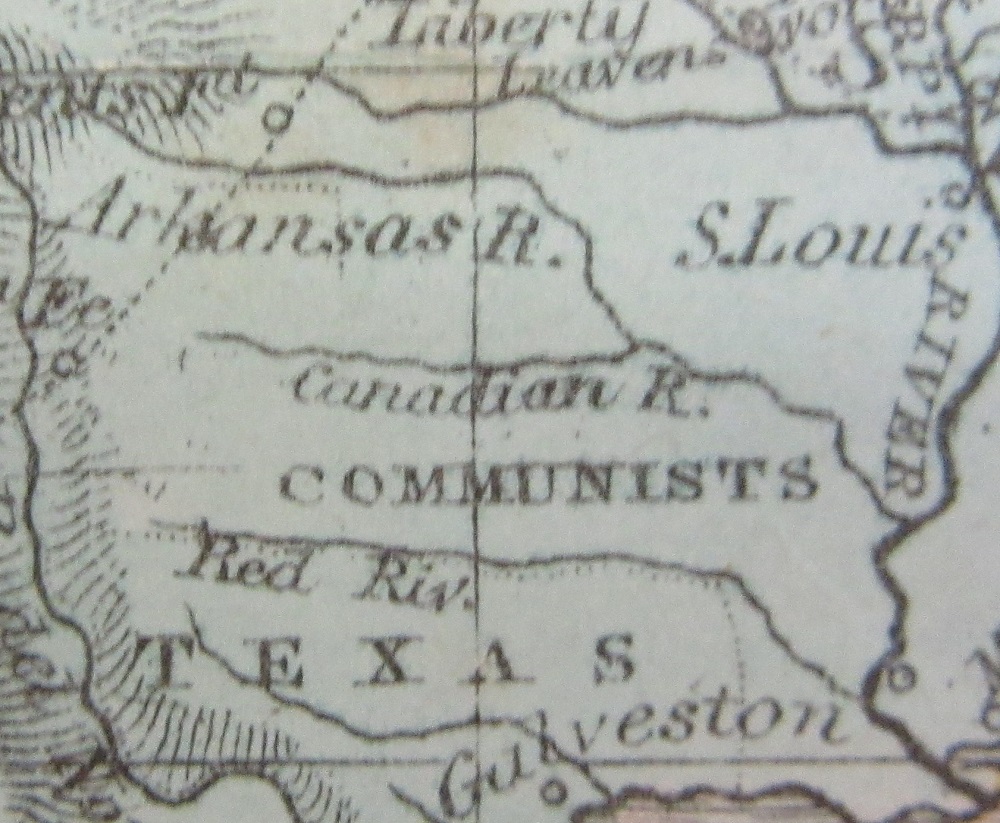 the Cape of Good Hope to Sydney in 1851 would have taken eight weeks by steam, four months by sail, and cost between £15 and £70 (equivalent to £1,460 to £6,800 today)  depending on class – cabin, intermediate or steerage. The map pre-dates a number of countries, or changes in the names of others. Canada wasn’t named as such until 1867, with the name only appearing over a small bit of land near the border with part of the US,  Alaska is still part of Russia (Russian Alaska features in an earlier blog post http://blogs.bodleian.ox.ac.uk/maps/2017/11/), and why is the word ‘communists’ written between Texas and the Arkansas River? New Zealand has a North and Middle Island, but no South Island. The information given is also fascinating. According to the map ‘The Anglo Saxon race deteriorate usually in residing between 25 degrees Lat. Nth and Sth of the equator’ and according to the table of countries adult yearly death rates per thousand were 14 in Australia and 28 in Texas, which seems bad until you compare it to the 27 per 1000 of those who stayed in Britain.

Emigration onto colonial lands meant displacement for any native peoples. Lands were advertised as being open and free, full of animals to trap or hunt and with fertile soils ideal for the growing of crops. A large number of maps produced from the mid-1700s onwards included details of opportunities for hunting or land regardless of the peoples already there. This example comes from ‘The United States of North America…’ by W. Faden, 1783 (E) F6 (163) and shows area in what was part of the Louisiana territory but now part of Iowa and settled by Sioux and Padoucas Indians which has ‘extensive meadows full of Buffaloes’. 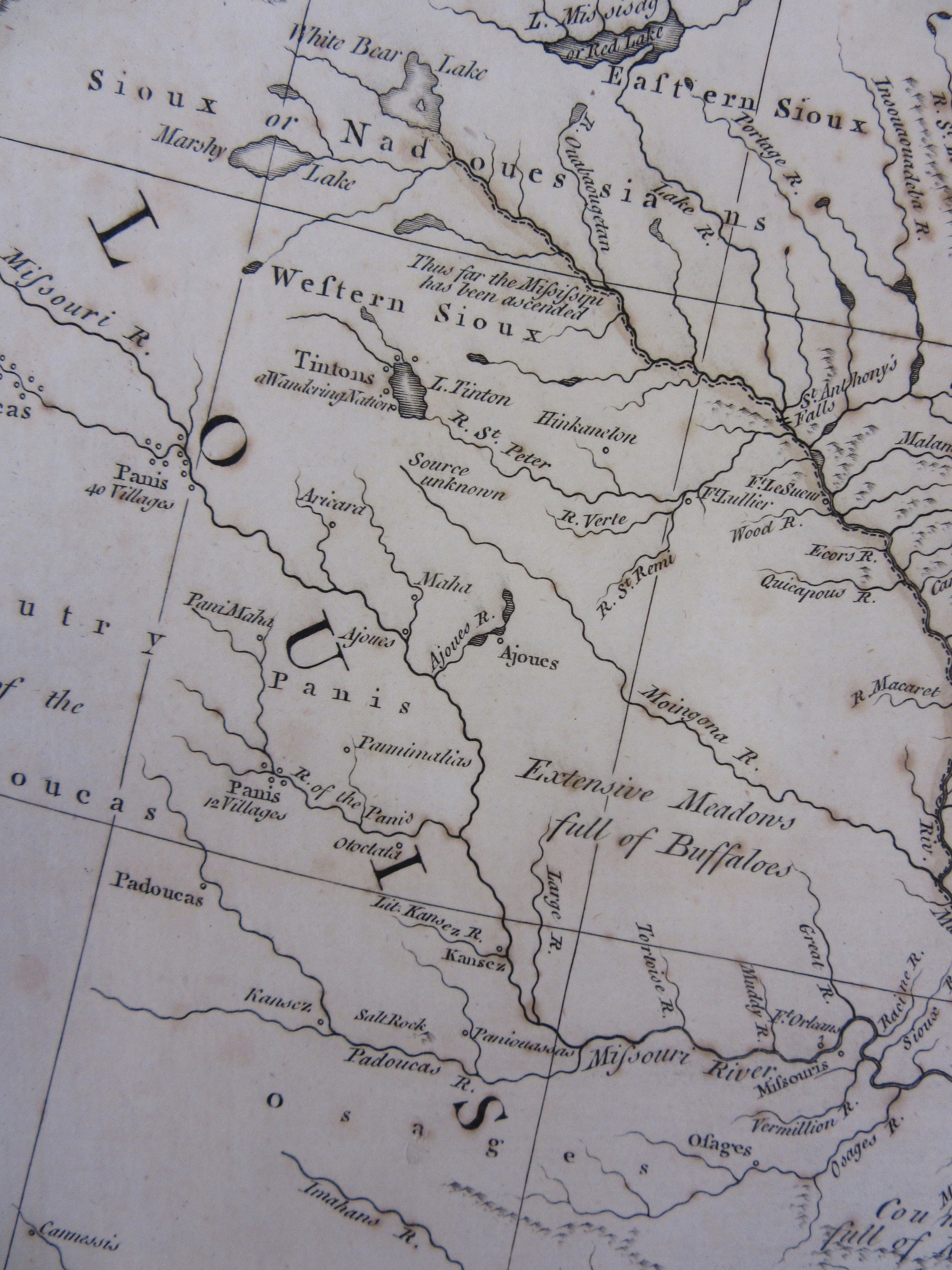 Books were produced to encourage emigration, with information on conditions, what should be taken, what could be grown and so on. This guide to North America, published in 1850 (400.14 r.47), describes the ideal emigrant. ‘America being a growing country and a land for labour and industry, the poor industrious labouring man, with a wife and two, three, or more sons and daughters fit for labour and of sober habits, would do well to emigrate’. 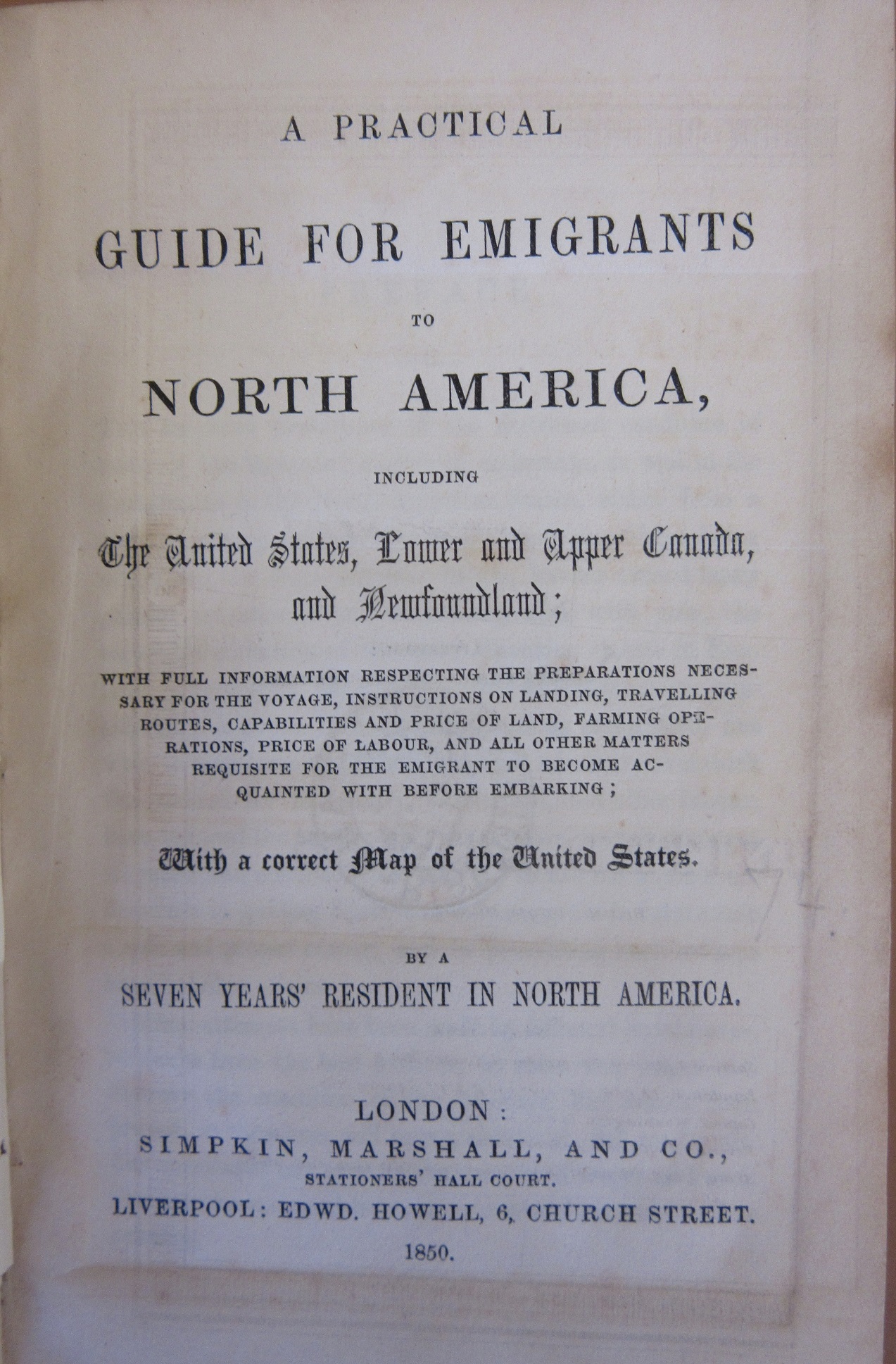 While the labouring man is roundly cheered and welcomed, the Native American isn’t. ‘Their warlike propensities; their revengeful, brutal and blood-thirsty acts and devices of torture on their captives; and the hardy defiance with which the poor miserable wretches pass through their sufferings till death are altogether astonishing’. A similar publication for those emigrating to Australia (1833, 810.14 r.29) is equally harsh on the native inhabitants, ‘….miserable and incurably degraded natives, fast vanishing from the land, are no longer numerous or bold enough to molest the white inhabitants’. 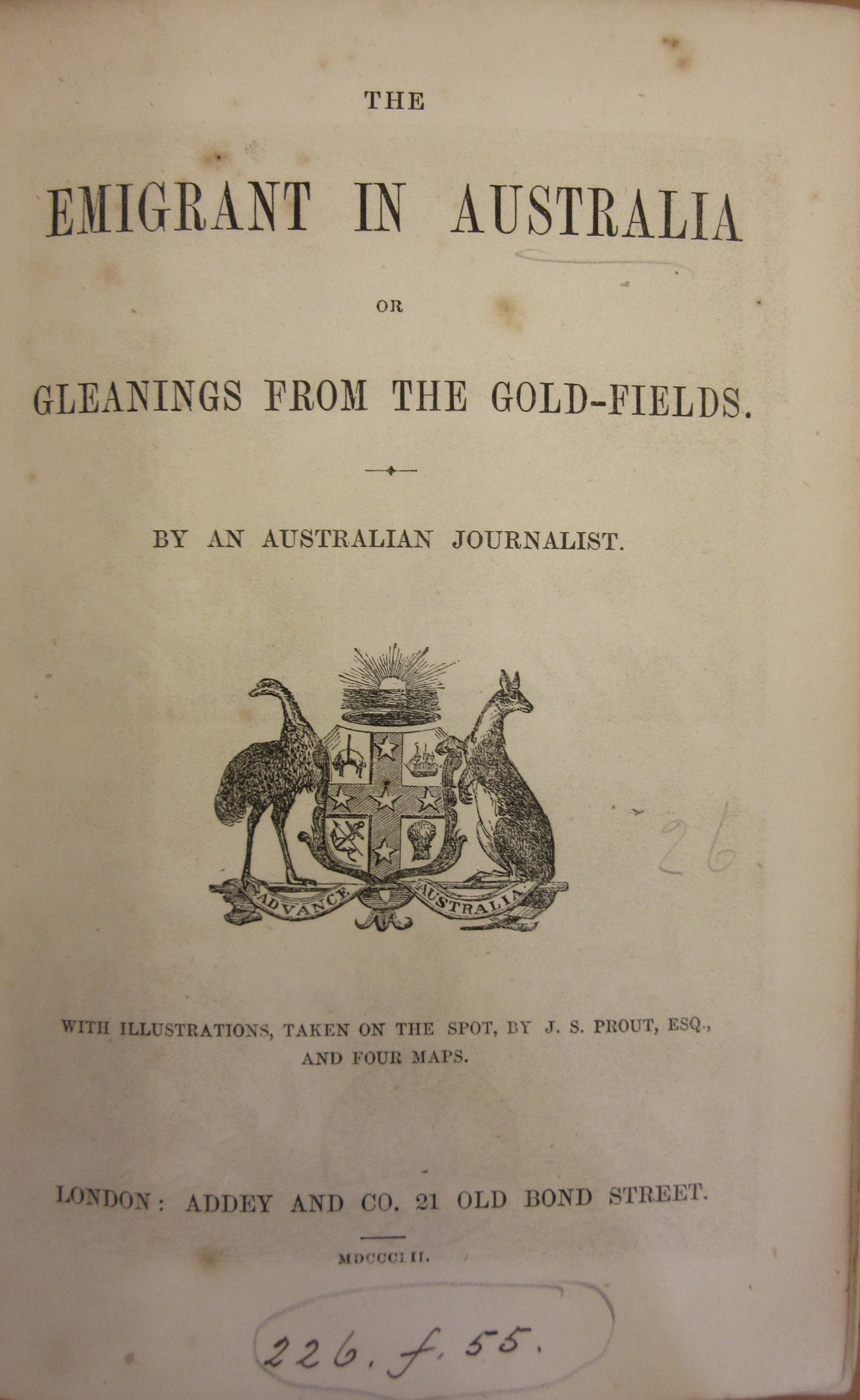 The costs and travel time involved meant that for many this would be a one-way trip. Best in that case to follow the advice offered at the end of the preface to ‘A practical guide for emigrants to North America’, ‘Whoever may make up his mind to emigrate, should decidedly wean himself from all the ties and endearments of home, or he will become unhappy and discontented under any circumstances, and, like many thousands, sigh to return’.

Emigration map of the World, or Geographical and physical map of the World on Mercator’s Projection shewing the British possessions, with the date of their accession, population &c. all the existing steam navigation, the overland route to India with the proposed extension  to Australia  and the route to Australia via Panama, Published by Letts, Son & Steer, London c1851. B1 (268)