This is an interesting example of re-using old stock. James Wyld published in 1845 a ‘Post map of Europe’, showing routes of communication throughout Central Europe. 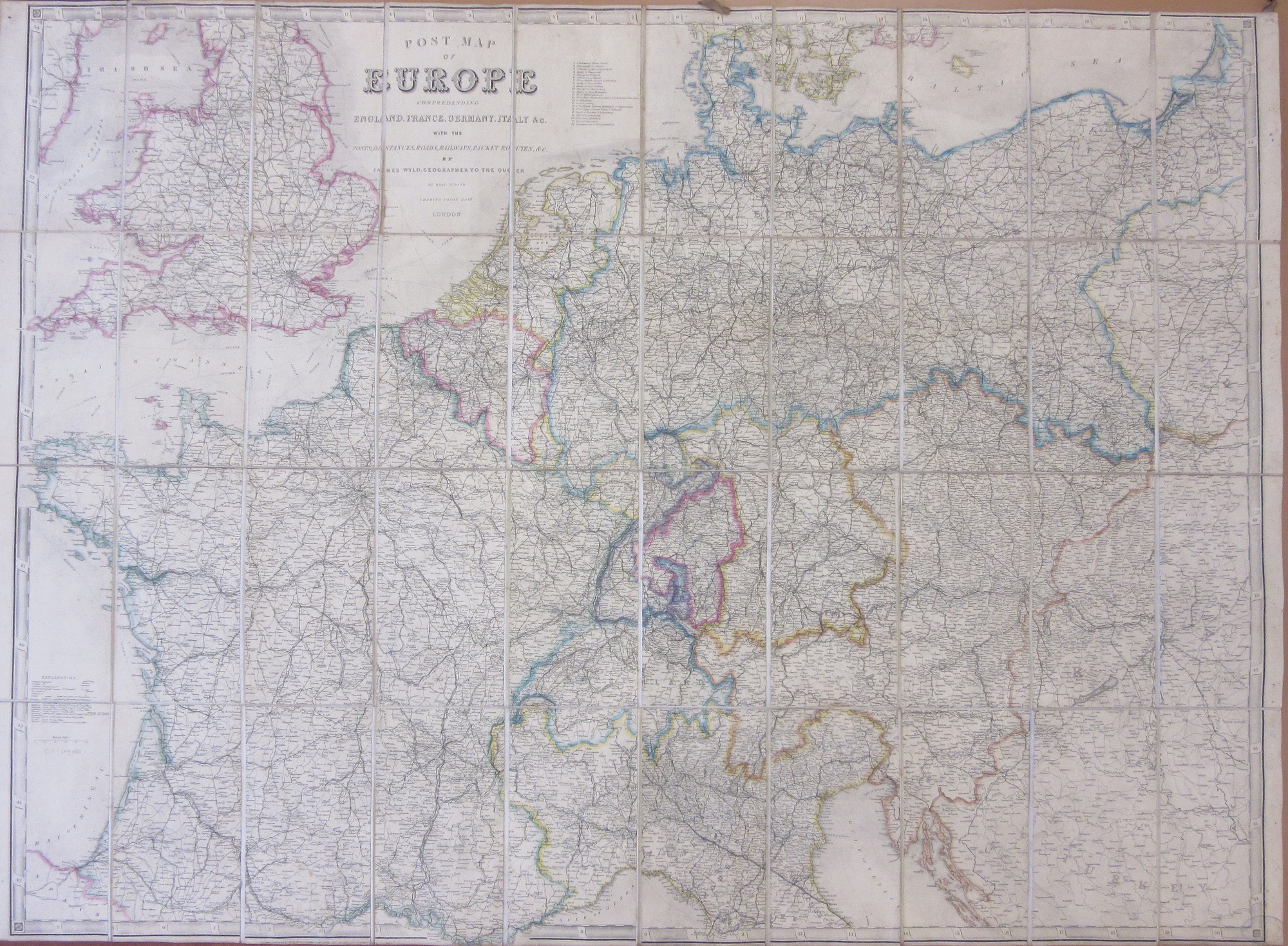 The map was printed by using a technique called copper-plate engraving. The image would be incised onto the plate which is then inked, the top surface is cleaned leaving the ink in the cuts, paper is then pressed down onto the plate. This plate could then be stored and re-used as needed, either in producing further editions of a popular map or, in this case, by changing some of the details and producing a new map at minimal cost. Being a soft metal meant that it was easy to alter or even remove information. 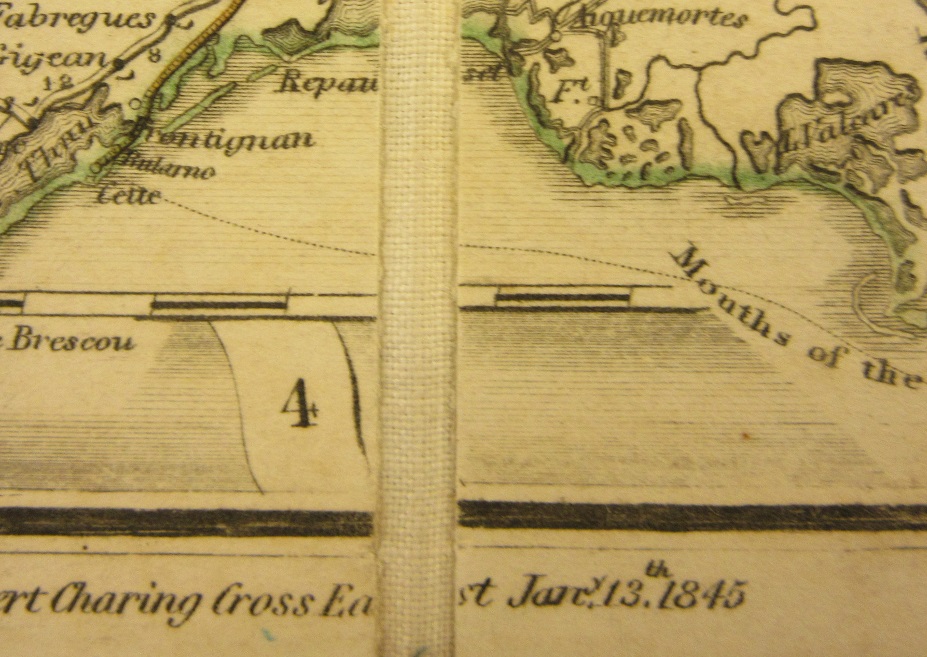 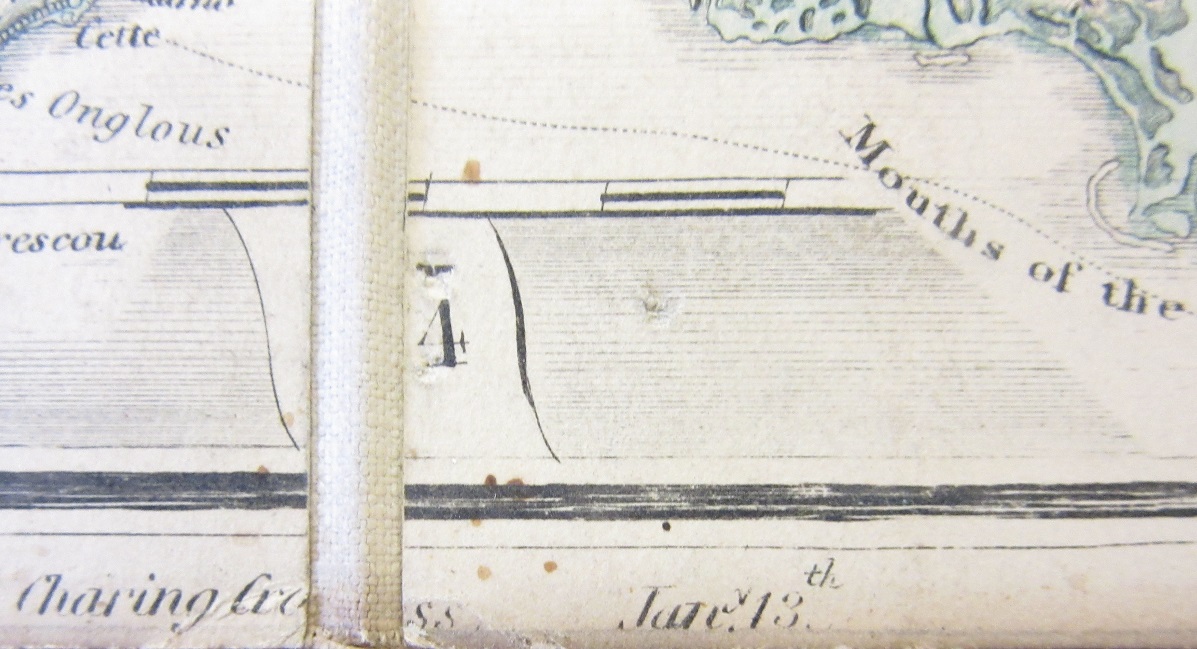 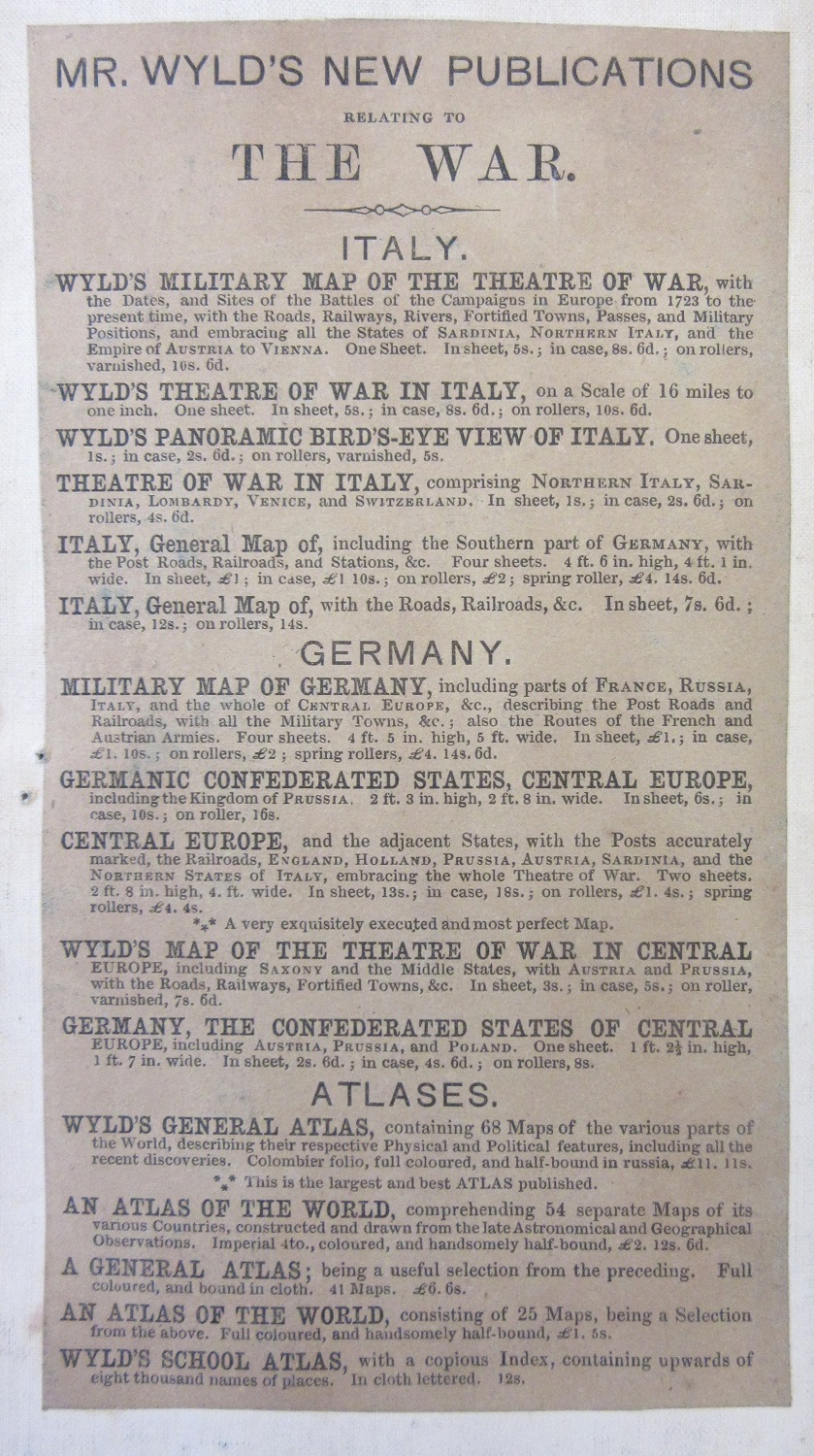 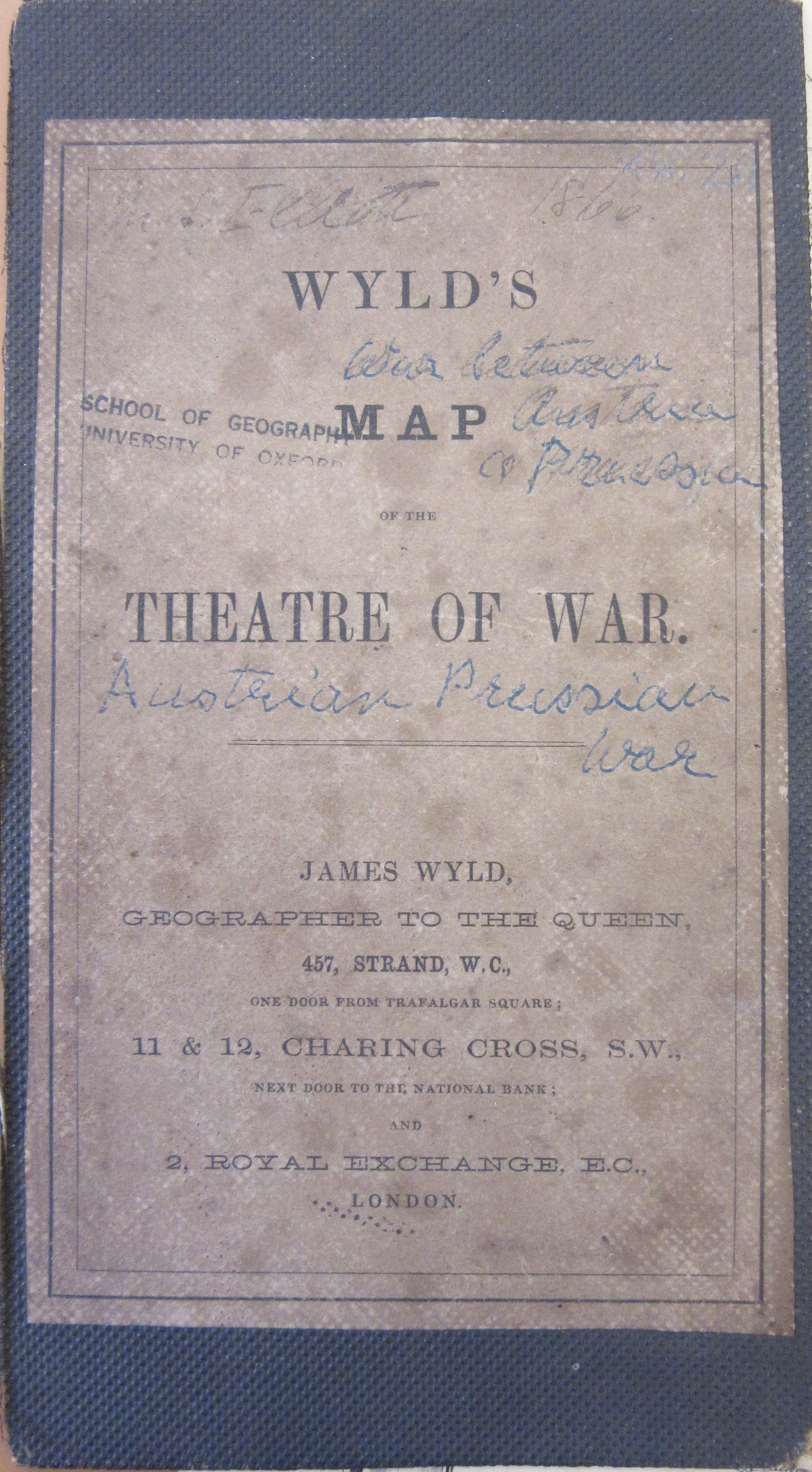 Front and back covers for the new map, the only real change, along with the removing of the year published, in the map.

Wyld’s Post map, with the removal of the year originally published and given a new cover (but not a new title on the map), becomes ‘Wyld’s map of the theatre of war’, the war being between Prussia and Austria in 1866. The outcome, a relatively easy victory for the Prussian Army in seven weeks led to the creation of the North German Confederation. Following war with France in 1870 the remaining German states joined this Confederation, creating a Germany that was to last until the end of the First World War. Wyld’s map illustrates well the confusing make-up of the different states before unification. 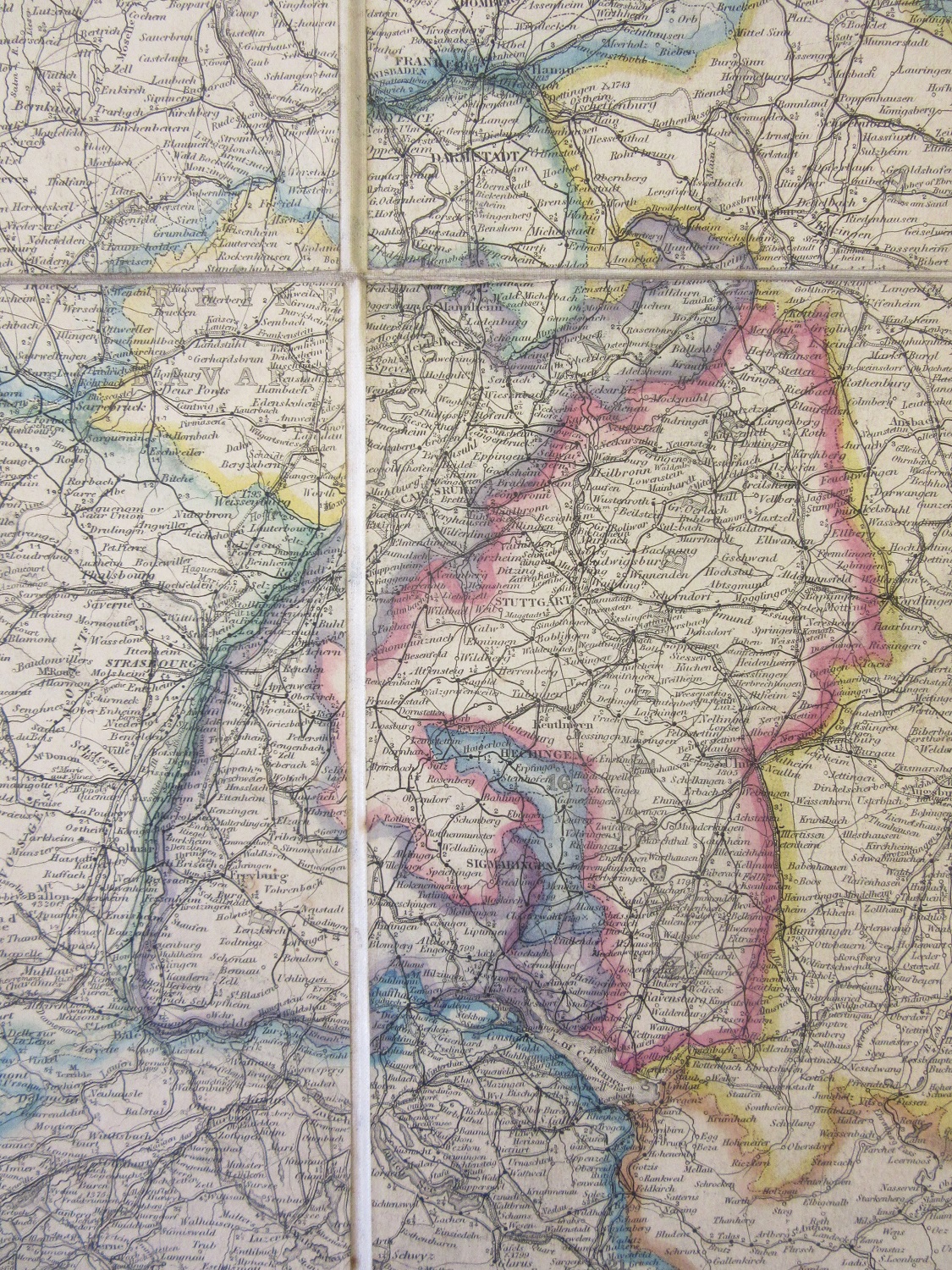 German states. This photo shows how maps intended to be stored folded were protected by being cut into rectangles and then stuck onto linen. If left as a complete map the paper on the folds would quickly deteriorate, linen was a lot more suitable and long-lasting folded.

James Wyld was the middle of three cartographers, father, son and grandson, all called James. The father was Geographer to George IV and William IV while the James who produced this map was Geographer to Queen Victoria. As well as produced a large number of maps he also created 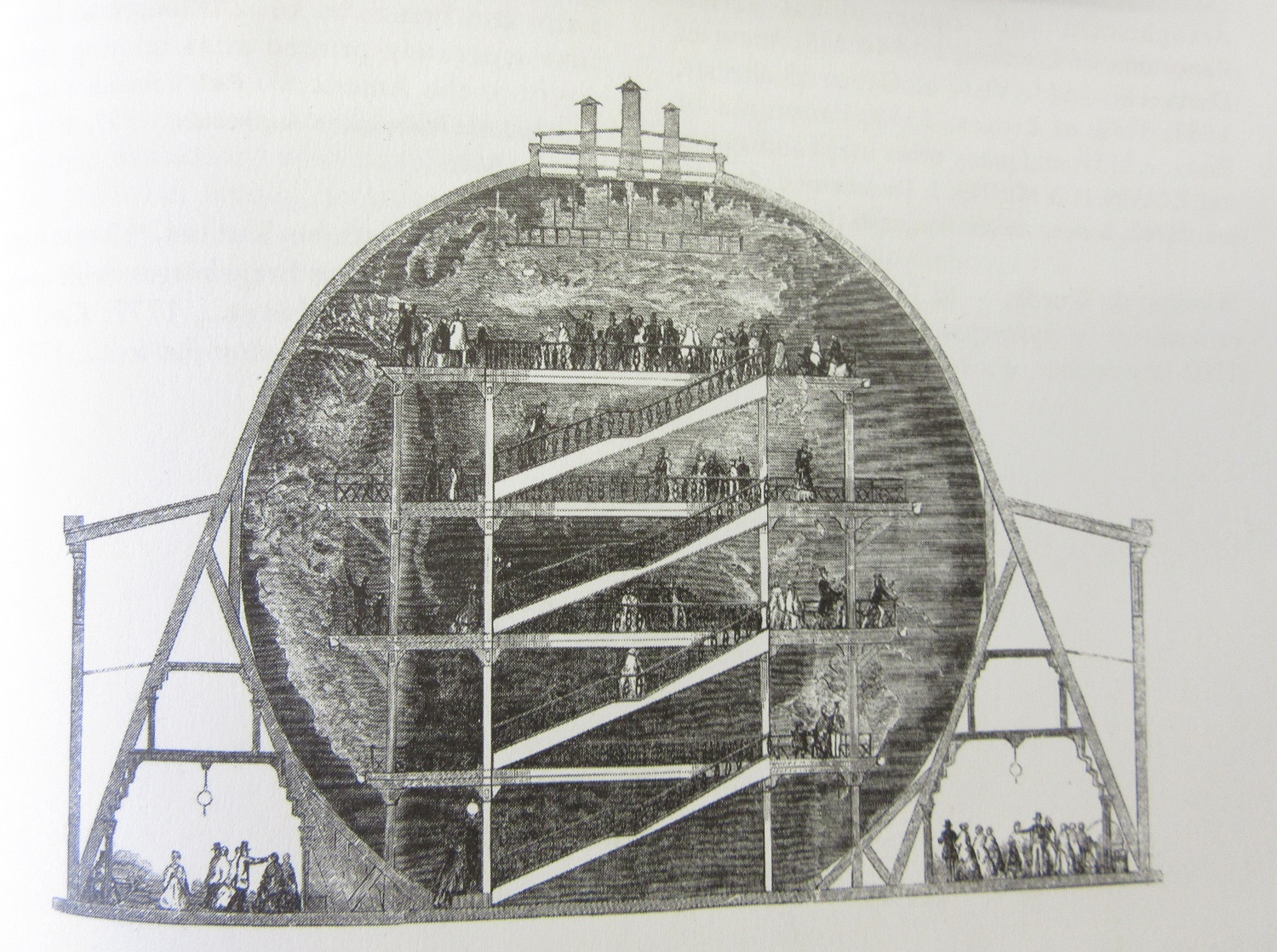 and exhibited a ‘Monster Globe’ for the Great Exhibition in 1851. This was a giant model of the Earth which was viewed from the inside.

Strict segregation on the Côte d’Azur. Caveman on Ile de Port-Cros, nudists on the Ile du Levant, according to this map of the French Riviera. Pictorial representation on maps is reasonably common (see the blog post in November 2017, ‘Something we should not forget’), nudity isn’t.

Blandford Forum is a market town in north-east Dorset. The attractive Georgian architecture and the neat lay-out of the centre of the town are the result of a devastating fire that started on the 4th of June 1731. This map, printed soon after, dramatically shows the condition of the town in the immediate aftermath of the blaze, all the dark shaded buildings were destroyed leaving few still standing. The box at the bottom tells the story. Starting in a tallow chandlers house (A on map) at 2pm the fire soon spread to the houses between the chandler’s house and the church (B)  before spreading to the properties across the road. The text ends ‘The church by the care of some of the inhabitants was preserved till about 11 at night tho’ the spire which was now covered with lead took fire within side about 4 in the afternoon which was soon extinguish’d but the fire flying over and thro’ it at every crevice, some sparks whereof lay latent till about 2 in the morning, then broke out in the middle isle under the lead, where ’twas impossible to extinguish it without engines which were already burnt many hours before, & the inhabitants so tired with much fatagues that before morning ye church was entirely destroyed ye poor remains being scarcely fit for a foundation’. 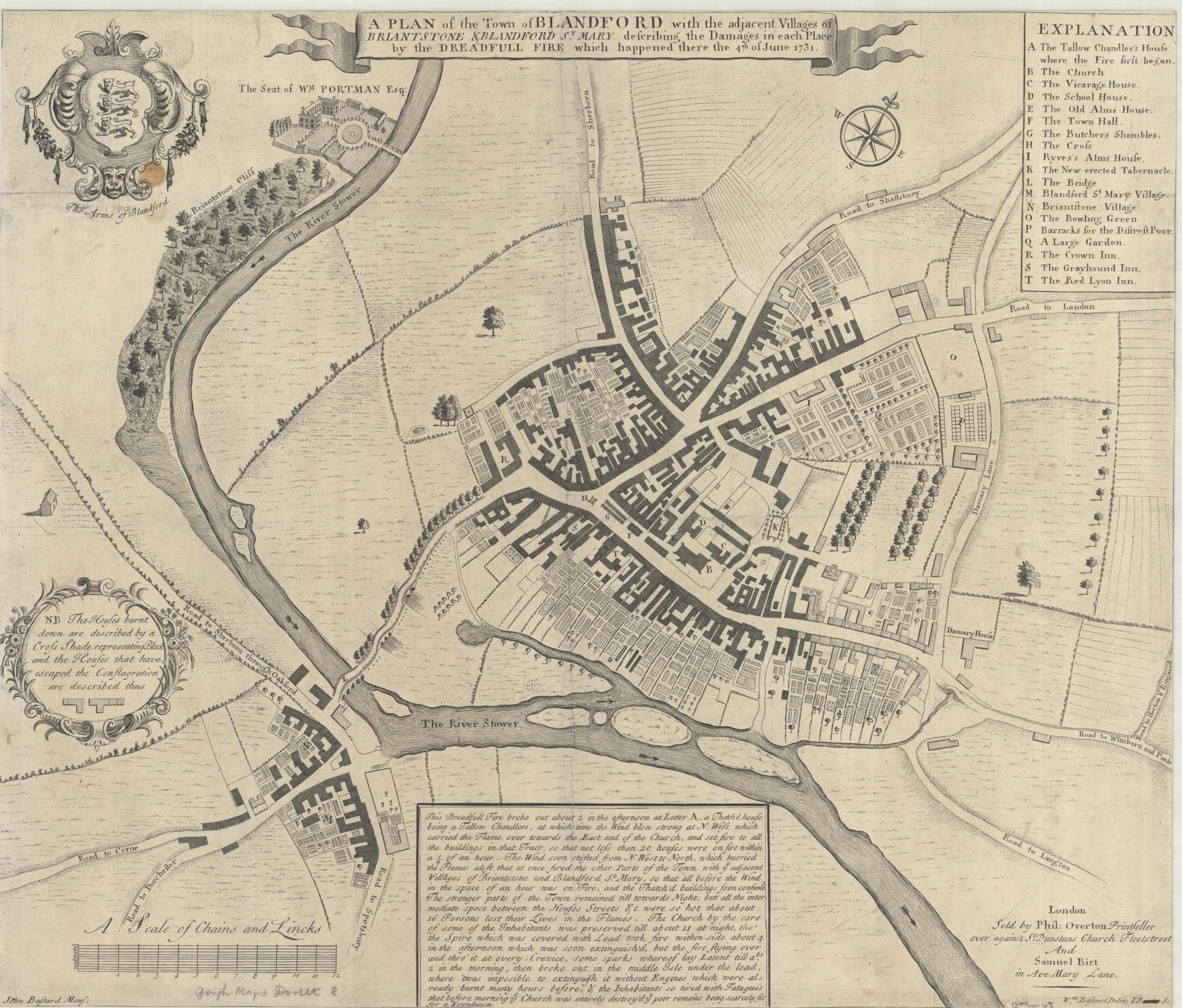 A plan of the town of Blandford with the adjacent villages of Briantstone & Blandford St Mary describing the damages in each place by the dreadfull fire which happened there on 4th of June 1731 [1731?] Gough Maps Dorset 8

Fires, and the damaged caused, do give the opportunity for re-developing, for improving road lay-out, building material and sanitation. The creators of this map, the rather unfortunately named Bastard brothers, were also the local architects, and they rebuilt Blandford with a new and improved market place, school and church. The new layout can be seen in this image of the town taken from the first edition of the Ordnance Survey, from 1888 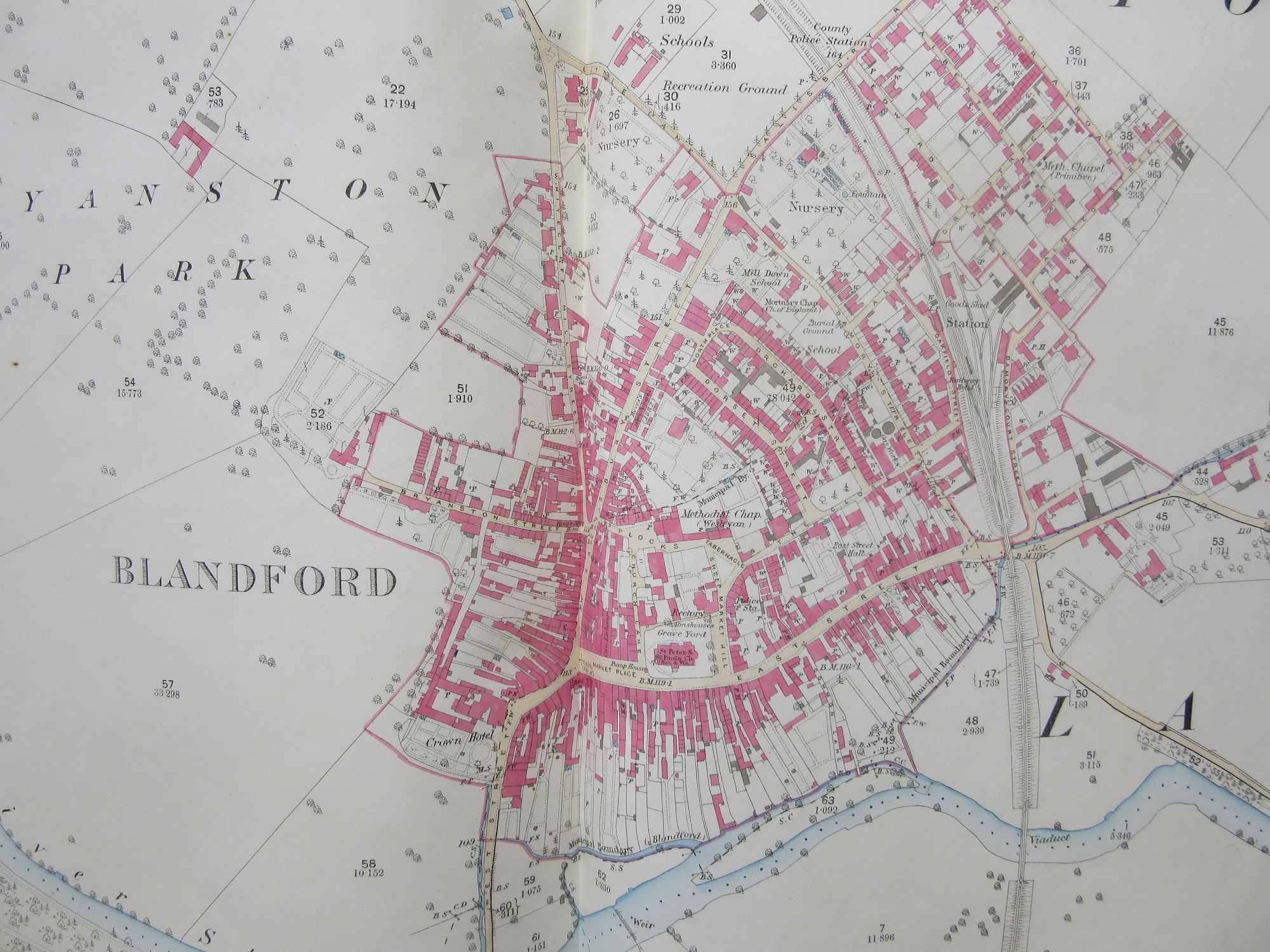 The most famous of urban fires though is the Great Fire of London, which fanned out of Pudding Lane late in the evening of the 2nd of September 1666 and soon consumed most of the buildings within the old walls, as these maps of the damage show. 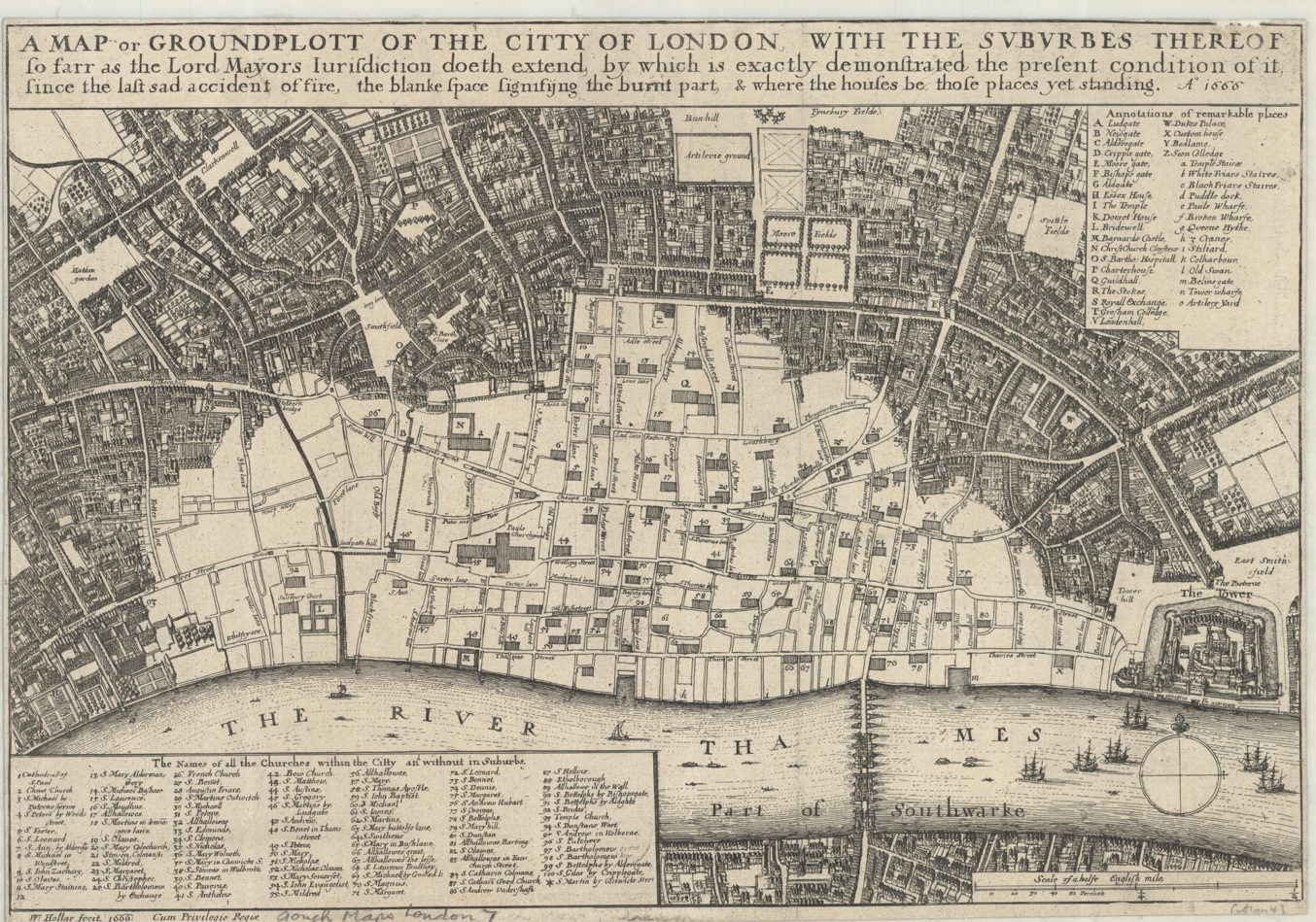 A map or groundplot of the citty of London and the suburbs thereof, that is to say all which is within the jurisdiction of the Lord Mayor…which is exactly demonstrated the present condition thereof, since the last sad accident of fire. The blanke space signifeing the burnt part & where the houses are exprest those places yet standing. 1666 Gough Maps London 7 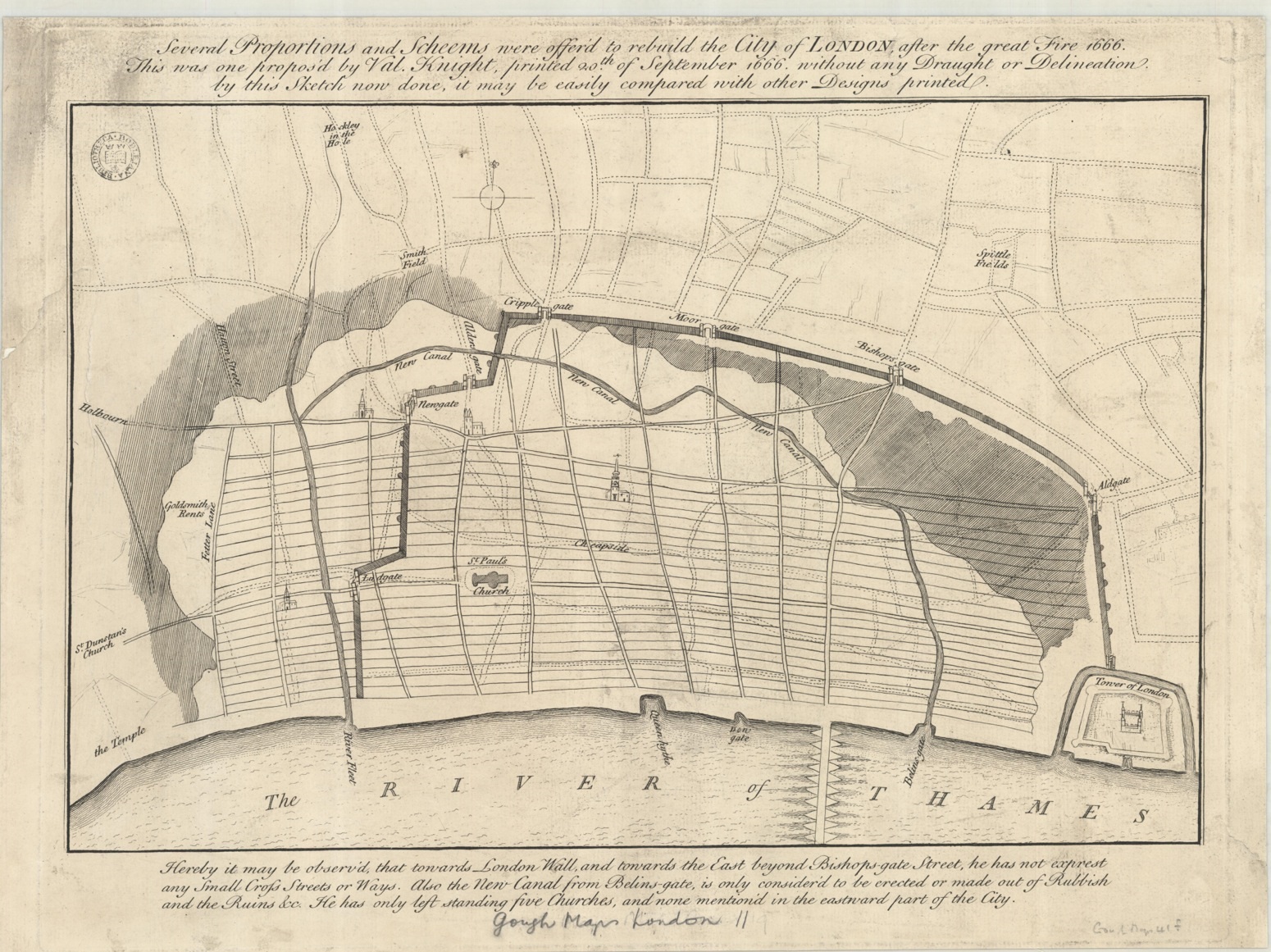 The above is one of many different designs for the rebuilding of the city after the great fire. Proposed by Valentine Knight the scheme called for a rigid street pattern but with a greater amount of water in the shape of a canal flowing through the city. This map was printed a remarkable 18 days after the fire started. Despite further plans submitted by such notable figures as Sir Christopher Wren in the end a design based on the old lay-out was implemented, but with greater distances between houses and set rules on building materials. A map of another of London’s great fires, that of March 1748. As with the map by Valentine Knight this was produced very quickly after the incident, a mere 8 days between the fire and publication.

Finally an inset from ‘An exact surveigh of the streets lanes and churches contained within the ruines of the city of London…’ (1669 (E) C17:70 London (643) which shows the fire from Southwark.