This large (2.5 by 2.2 metres), colorful and complex map of Pacific tectonic activity was produced by the Academy of Sciences of the Soviet Union. Printed on 6 sheets the Tectonic Map of the Pacific Segment of the Earth, spans an area from the Bering Straits in the north to Antarctica in the south, from the Americas in the west to the countries of South-East Asia. This is a large map covering a large area. 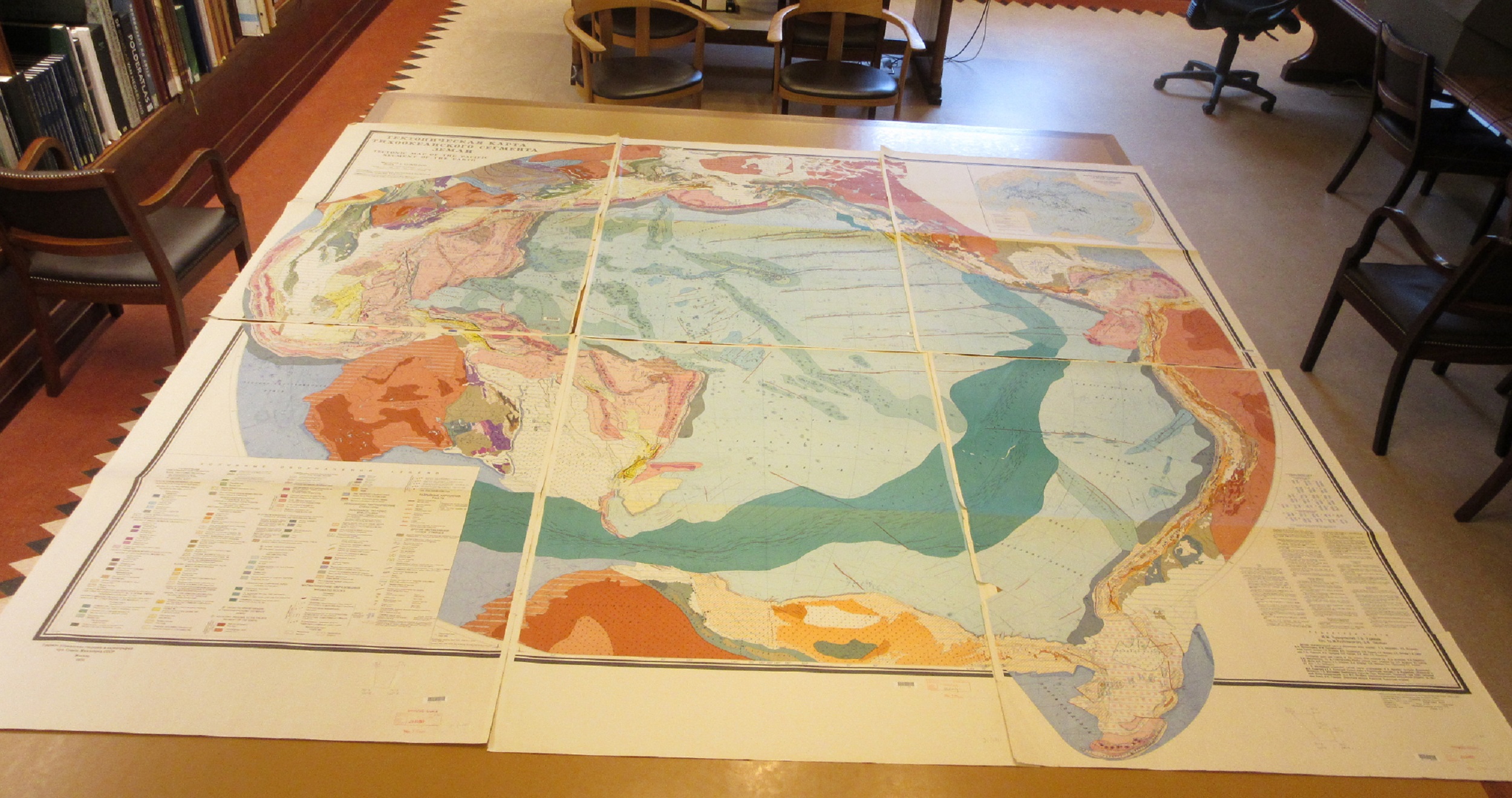 Tectonics, and the structural activity such as volcanoes and earthquakes that result, are a tricky thing to show, as can be seen on the map. Fault lines, areas of volcanic and earthquake zones and different eras of geological time often overlap and make for a complicated view where it is tricky to get an idea of where you are without closer inspection.  Due to the large area covered 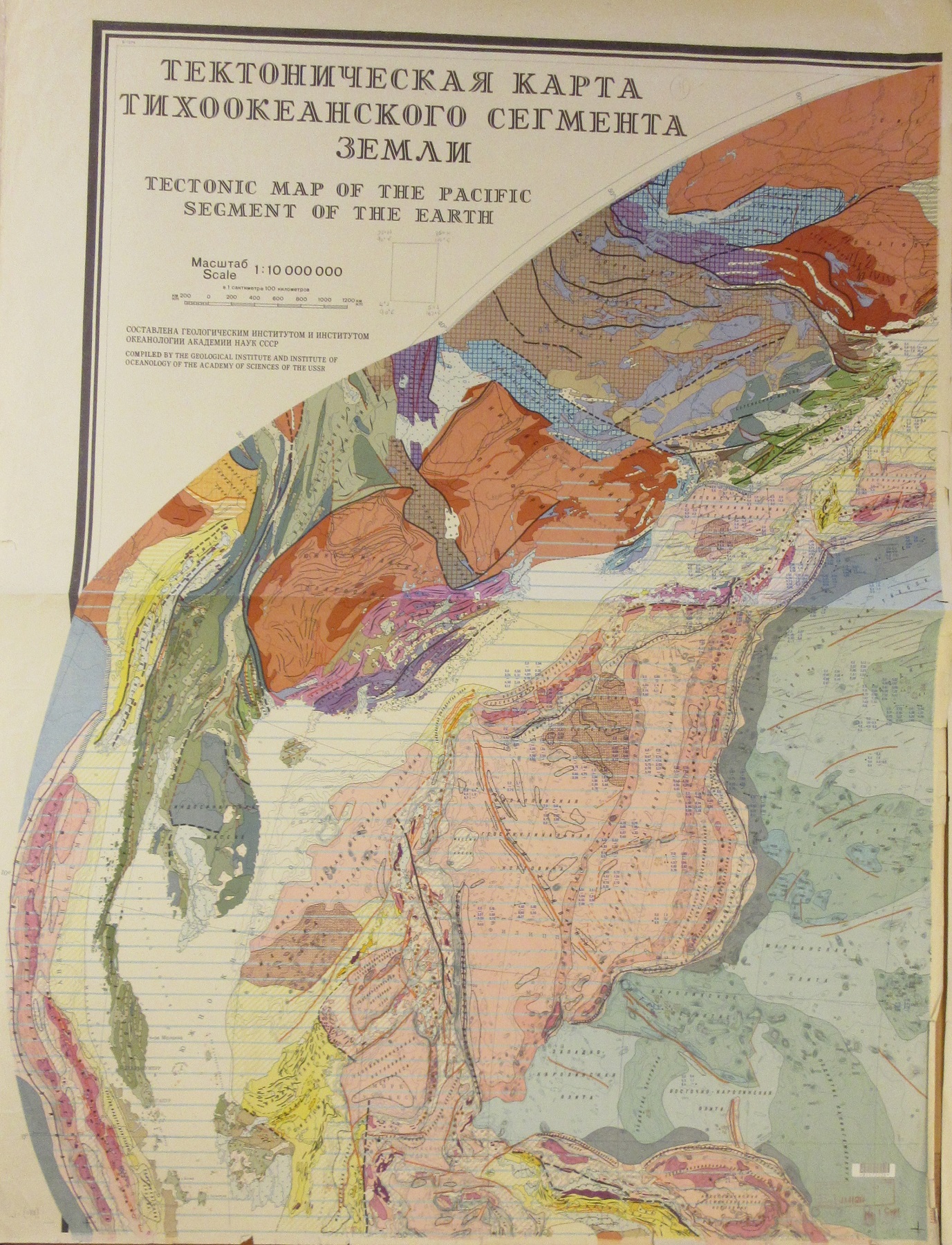 the projection means the countries portrayed follow the curvature of the earth, so the Americas starts at the top middle and then goes down the right-hand side of the map while the Soviet Union and then the countries of east Asia; China, Malaysia, Cambodia and so on are on the left. Australia is above the legend on the bottom left sheet. 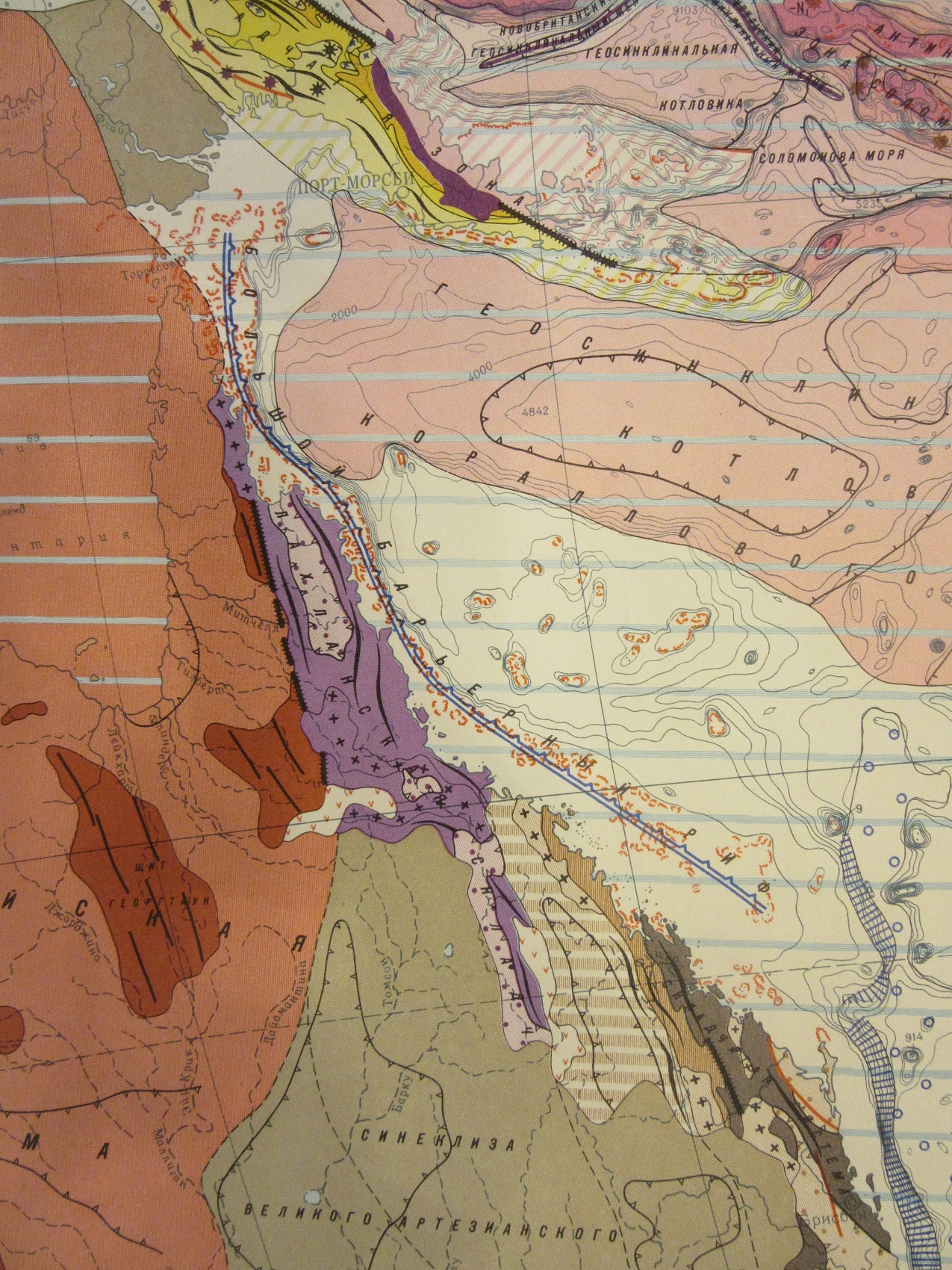 Japans complex geological make-up can be seen by the amount of detail overlaying the islands.

The black dots are volcanoes, the black lines with spikes are main fault zones while the purple lines are geosyncline trenches (folds in the earths crust). The different colours represent different eras in geologically history.

At the time this map was published the concept of tectonics was going through major changes. The discovery, made after important mapping surveys of the oceans floors in the 1950’s and 1960’s, of seafloor spreading (where vents on the ocean floor bring up rocks from the earth which slowly, very slowly, spread out until they meet the edge of the continental shelf and disappear back into the earth again like a conveyor belt) led to the somewhat grudging acceptance of plate tectonics in the mid-1960s. Tectonic plates are a series of large and numerous smaller plates that make up the surface of the Earth, and it is the movement of these plates that creates areas of weakness in the Earth leading to, amongst other things, volcanoes and earthquakes. Plate tectonics and continental drift explain a great deal about the Earth; how South America looks like it could join up with Africa like a giant jigsaw (something which has been puzzling people since the 1600s), how fossil strata and rock formations match up in countries separated by vast oceans, how the same rocks are found on shores thousands of miles apart. As Bill Bryson notes in his book A short history of nearly everything  the acceptance of these theories suddenly meant that ‘Geologists…found themselves in the giddy position where the whole Earth suddenly made sense’. 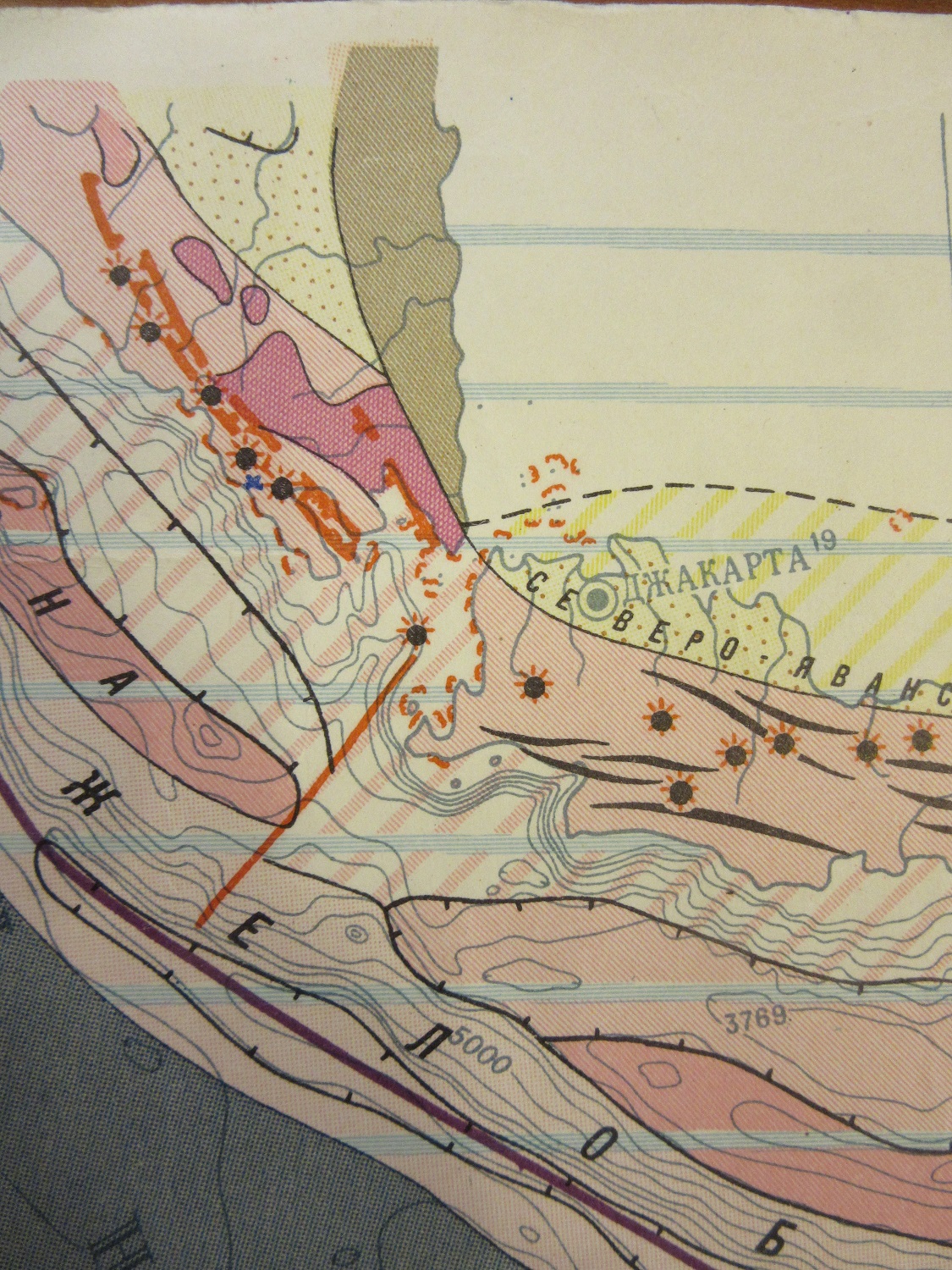 The volcano of Krakatoa, the black dot at the northern end of the orange line, between Java and Sumatra.

The idea behind plate tectonics, that the earths crust could move, had its origins in ideas from the turn of the century. One of the earliest exponents of drifting continents was Alfred Wegener, a German meteorologist. He published a book in 1912 called Die Entstehung der Kontinente und Ozeane setting out the theory that the continents were once all joined together and had, throughout time, separated and re-joined in different ways a number of times. Here is the title page from the earliest English translation in the Bodleian from 1924 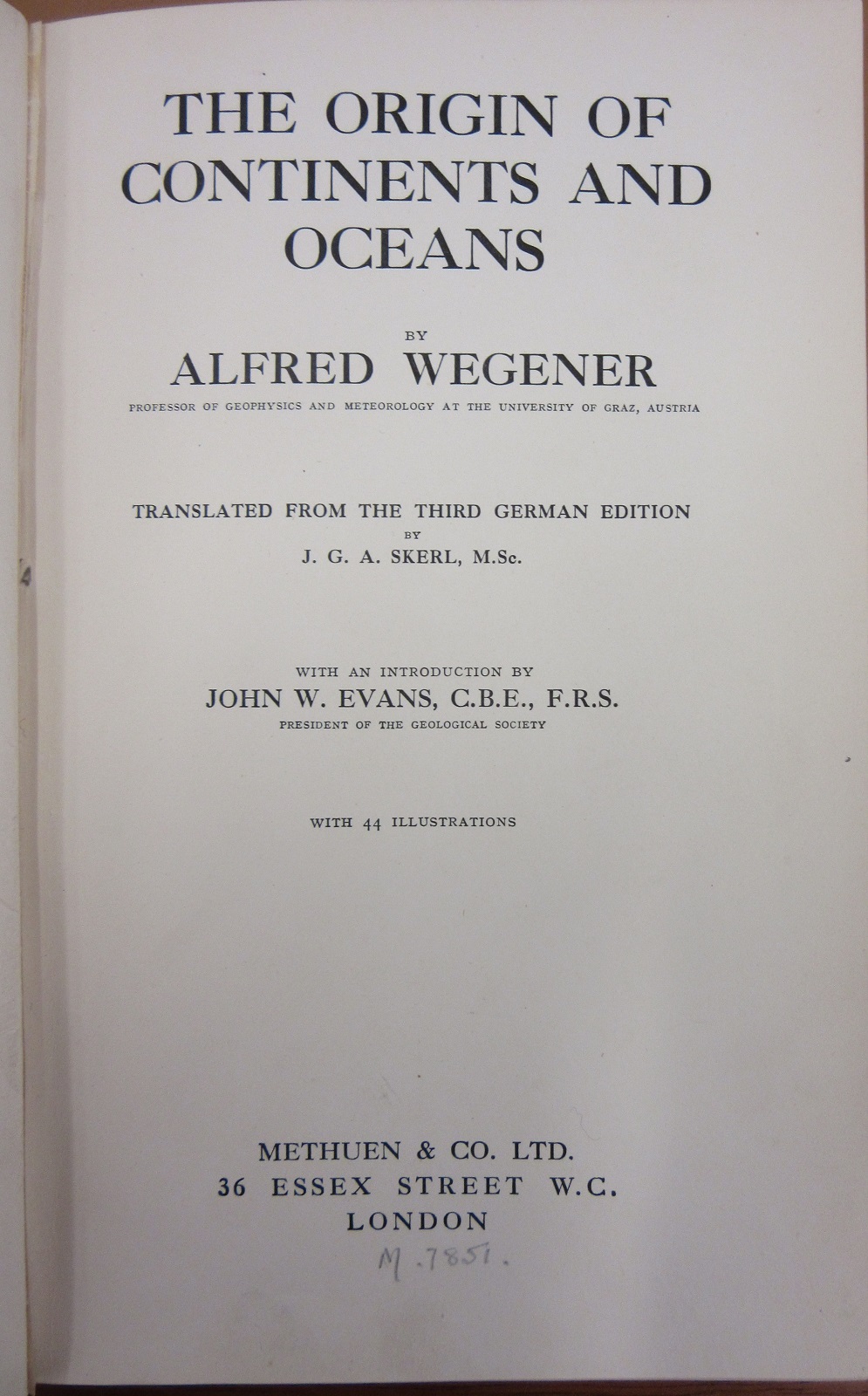 Wegener’s theory didn’t go down well in the scientific community, not only going against current thinking but also coming from someone working outside the relevant disciplines, Wenger after-all, being in their eyes only a weatherman. 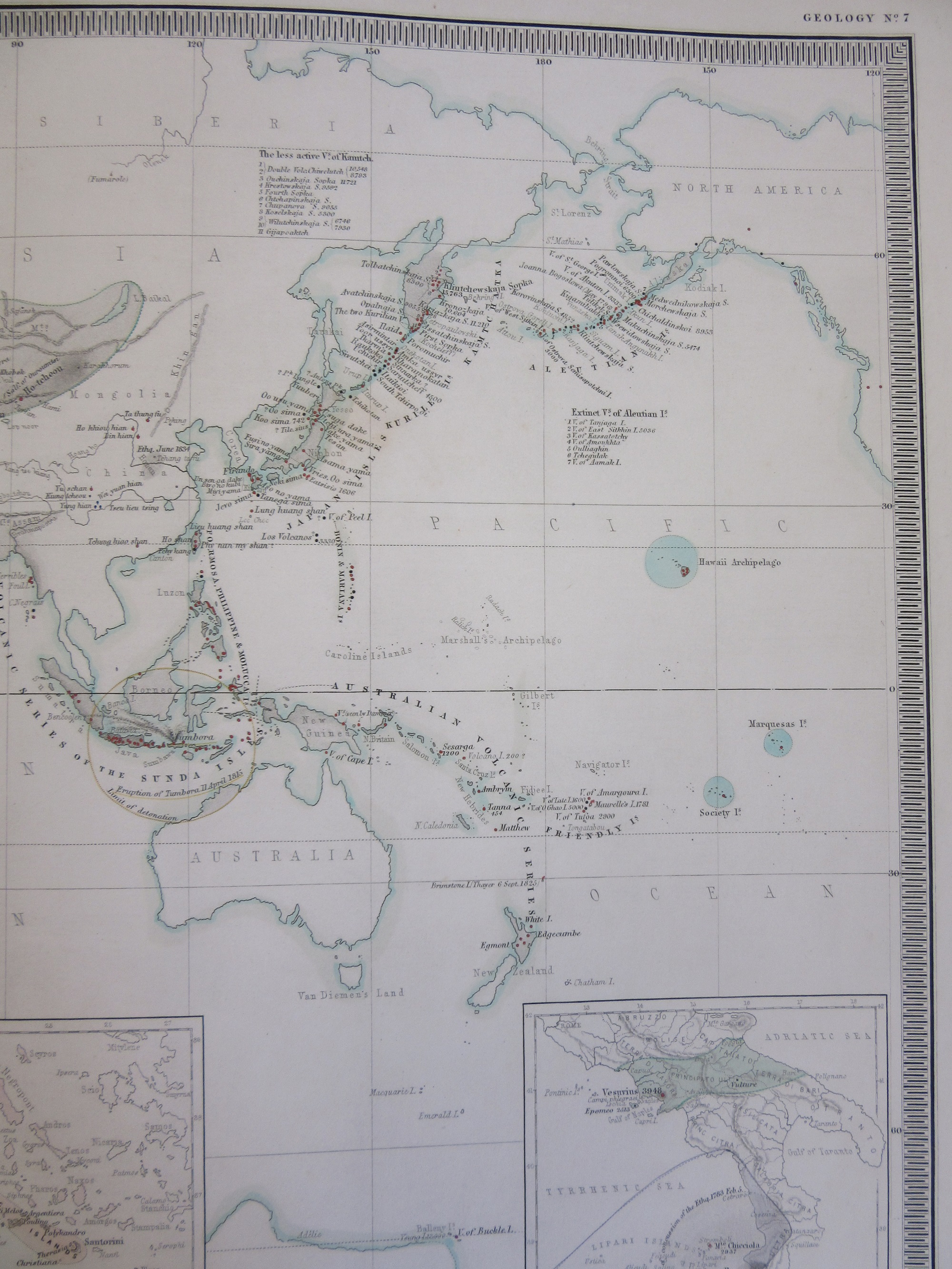 This extract from an atlas published in 1849 shows the volcanic activity in the Pacific area, with the red dots indicating active volcanoes, the black inactive. This map shows how the Pacific plate, which runs along the line of the activity, was evident even if Scientists of the day were unaware of the concept.

One thought on “Pacific tectonics Soviet-style”