The idea that playing cards could be illustrated with maps is a bit surprising, since maps tend to be on fairly large pieces of paper, and most playing cards are pretty small. However, early playing cards were often designed to be decorative and to serve an educational purpose as well as being for card games. So geographical subjects could feature, and these sometimes included maps.
The 39 historic counties of England, and 13 of Wales, together make up the convenient number 52 – the same as the number of cards in a standard pack. This perhaps inspired the first known example of geographical playing cards, a set made in England featuring all the counties, by the mysterious “W.B.” in 1590. Few of these survive and the Bodleian doesn’t hold any. The card maker is believed to be a W. Bowes, probably related to Ralph Bowes who received a monopoly to import playing cards in 1578, but attempts to identify this individual and establish a more precise relationship have been unsuccessful. 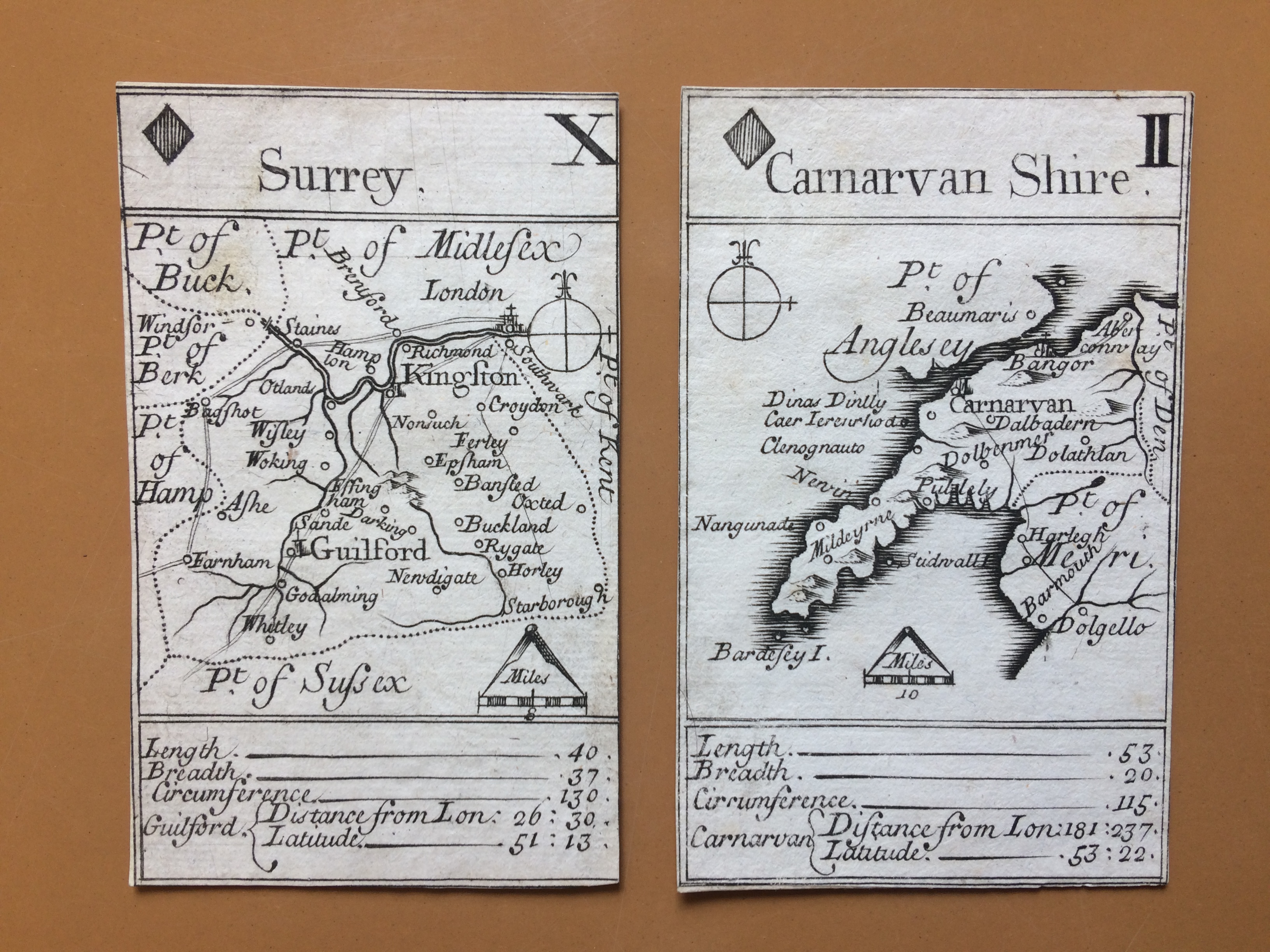 In 1676 the mapmaker Robert Morden issued a set of playing cards with maps of all the counties, each one showing a reasonable amount of detail for an area a little over 5cm square. Each little county map shows the main towns, roads, major rivers, and a scale bar, and is accompanied by information on the length, breadth and circumference of the county, and latitude of the main town and its distance from London. Small changes to the plates show that the set was reissued at least twice by 1680; the names of adjacent counties were not on the original version. The maps were also sold bound as a small atlas without suit marks. They were copied and the set issued again by John Lenthall, a playing card seller, around 1717. There was even a later version of the same set published in the 1780s, nearly a hundred years after they first appeared. The cards illustrated above are both from Lenthall’s issue of the cards. 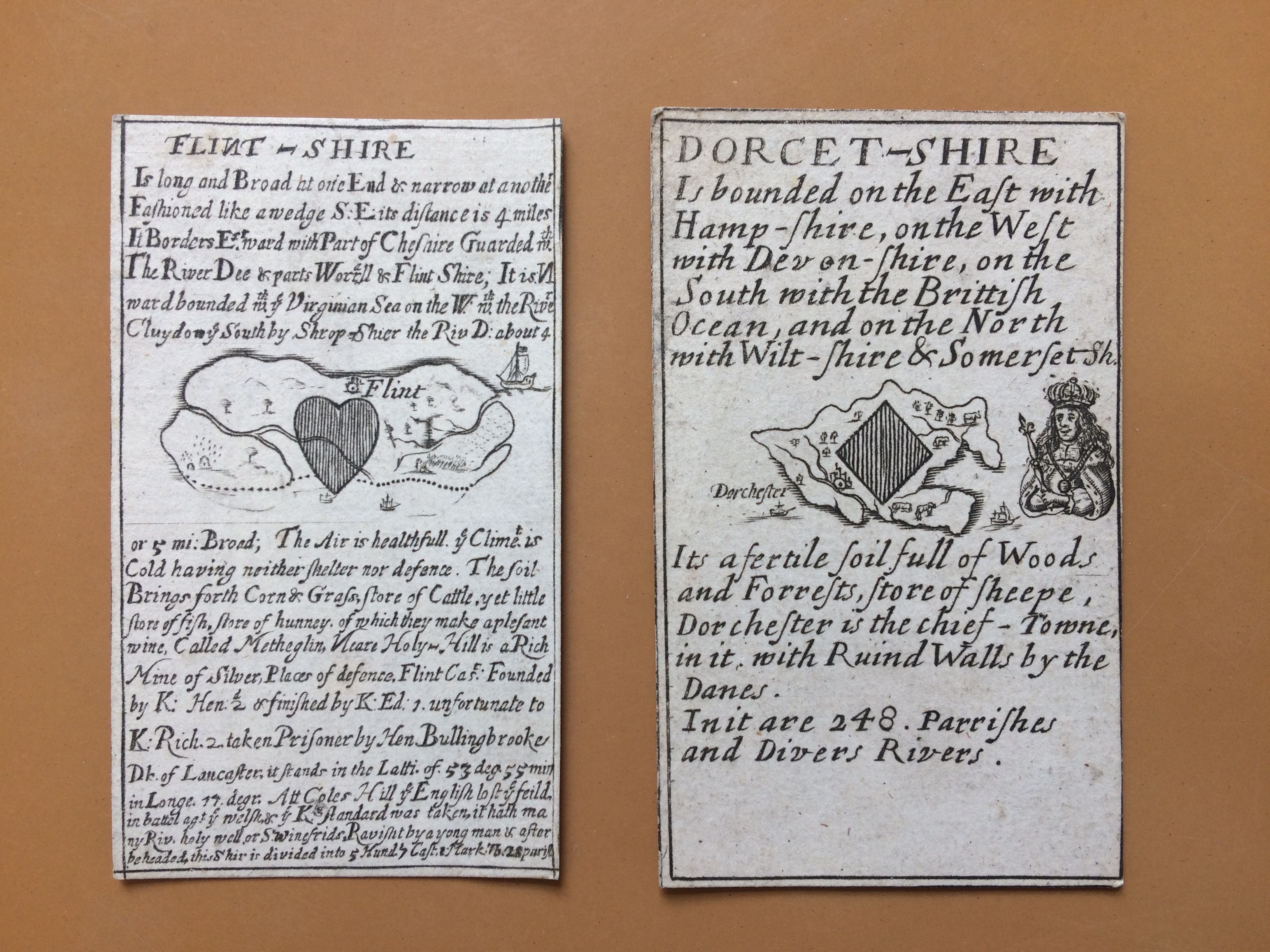 Later in the same year that Morden issued his first set of county playing cards, William Redmayne published a competing set. The maps are very small and poorly drawn, and the suit marks (positioned in the middle of the cards) almost obscure the maps. They do however have more extensive text, with facts about the geography and history of the counties included. Differences in style between suits suggest that more than one engraver was involved, so perhaps the set was produced in a hurry. Despite the limitations of the maps, these must have sold reasonably well as a second set with minor changes came out the following year; again John Lenthall acquired the plates and issued a set some time in the 1710s. Lenthall sold many packs of cards of different designs; contemporary advertisements show that he had over 40 packs for customers to choose from. The cards shown above, from Redmayne’s second issue of the set, show the difference in style and in the amount of written information between cards.
Geographical cards with maps of countries around the world also existed, with the 4 continents then known to Europeans (Africa, Asia, Americas, Europe) serving as the 4 suits. But maps of the English counties seem to have been particularly popular. The maps shown are from the Bodleian’s John Johnson Collection of Printed Ephemera; the shelfmark is Douce Playing Cards: English Geographical.
There is a detailed analysis of map playing cards of this type published by the Map Collectors’ Circle (“Playing cards depicting maps of the British Isles, and of English and Welsh counties,” by Sylvia Mann and David Kingsley. Map Collectors’ Series No. 87, 1972)

One thought on “Playing with maps”