This collection of nineteenth century French sea charts has already been referred to in this blog last year, in a post dealing with some small scale charts used for route planning. Nearly a year later, I am still cataloguing the collection! The more detailed charts of particular coasts are fascinating too. One of the remarkable features of early sea charts is the coastal views they sometimes include, small thumbnail images showing the appearance of the land from the sea; these have been used for centuries. They clearly had a practical purpose, helping mariners to locate themselves, but they can be things of beauty too. The ones in these French charts are small, detailed, finely engraved views. Similar examples are found on British charts of the same period.

In some cases these are quite dramatic. This view of the entrance to Grundarfjörður in western Iceland shows a forbidding mountain range. The fineness of the engraving and subtle shading gives the small picture an austere beauty perhaps like that of the landscape itself. 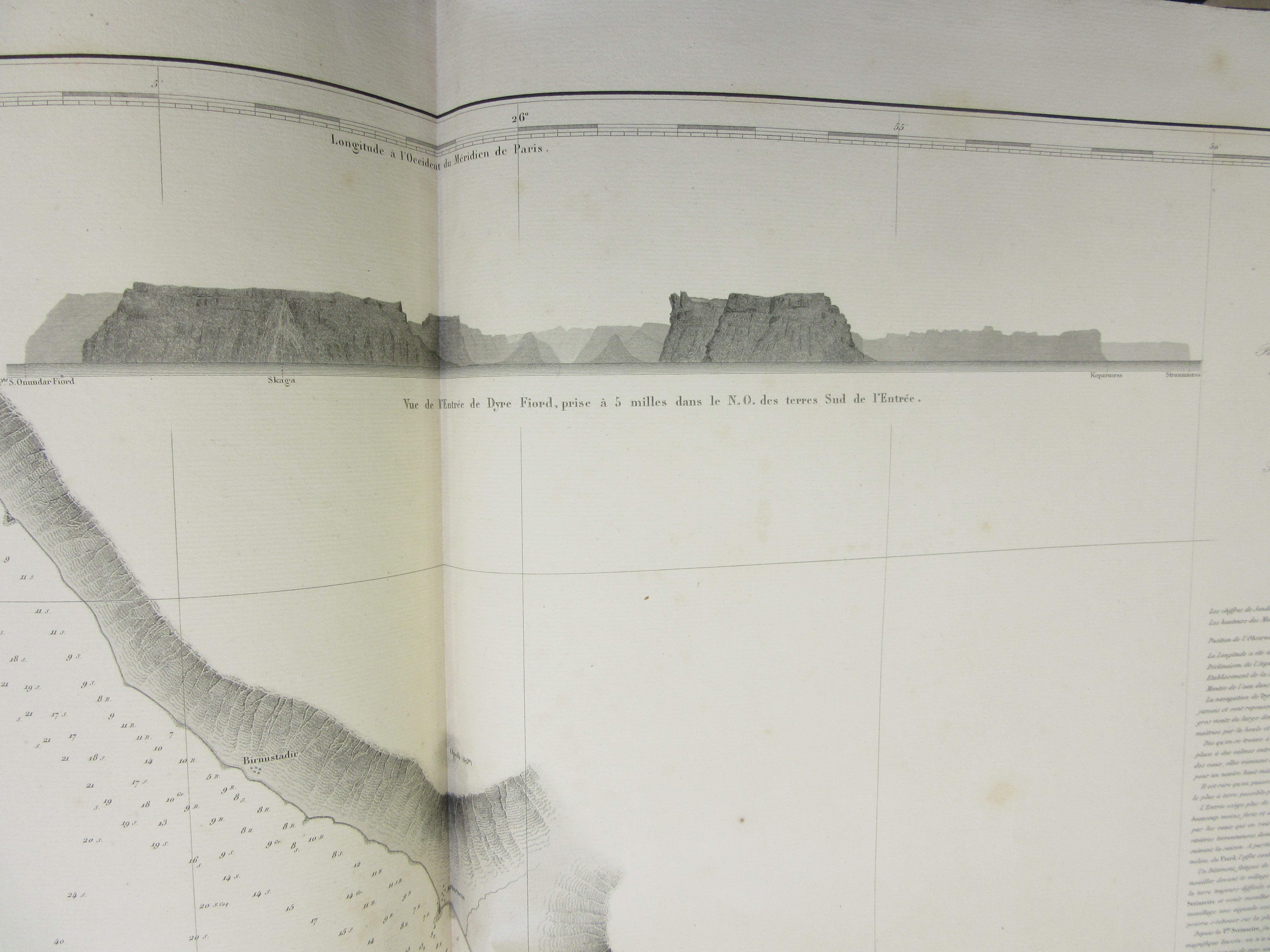 Similarly, this 1856 chart of Dyre Fiord (Dýrafjörður) in the remote north west of Iceland shows a forbidding coastline of dark cliffs. The chart itself, although mainly focused on the sea,  shows the coastal relief and gives an indication of the steep mountains rising around the fjord. 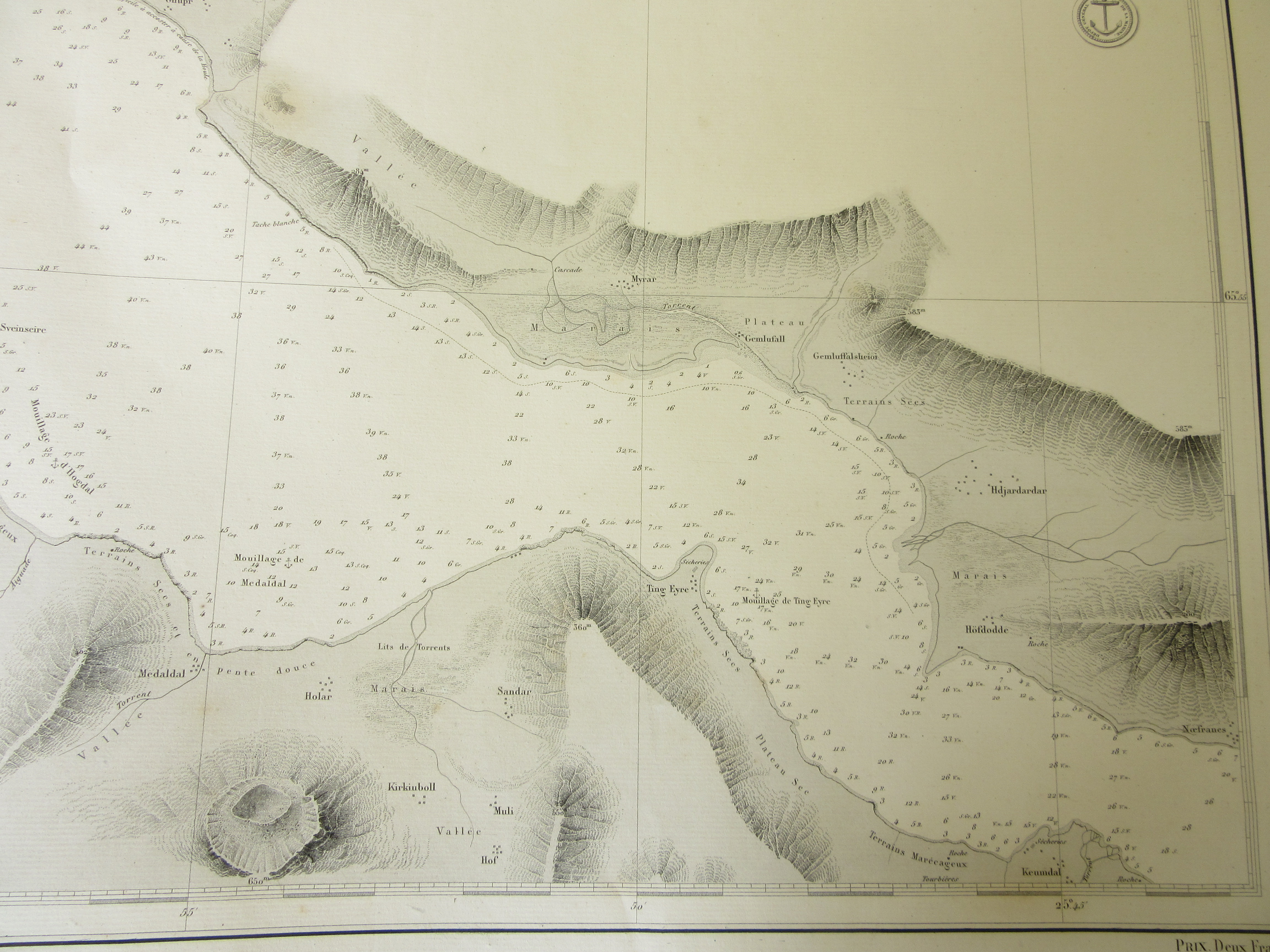 Both of these were engraved by S. Jacobs, who seems to have done a lot of work for the French Dépôt des cartes et plans de la marine. There are a surprising number of detailed French charts of this remote part of Iceland; the next chart in the volume shows the anchorages and the village of Hogdal (Haukadalur) in some detail. The larger settlement of Thingeyri or Þingeyri, marked here as Ting Eyre, was already an important fishing centre. 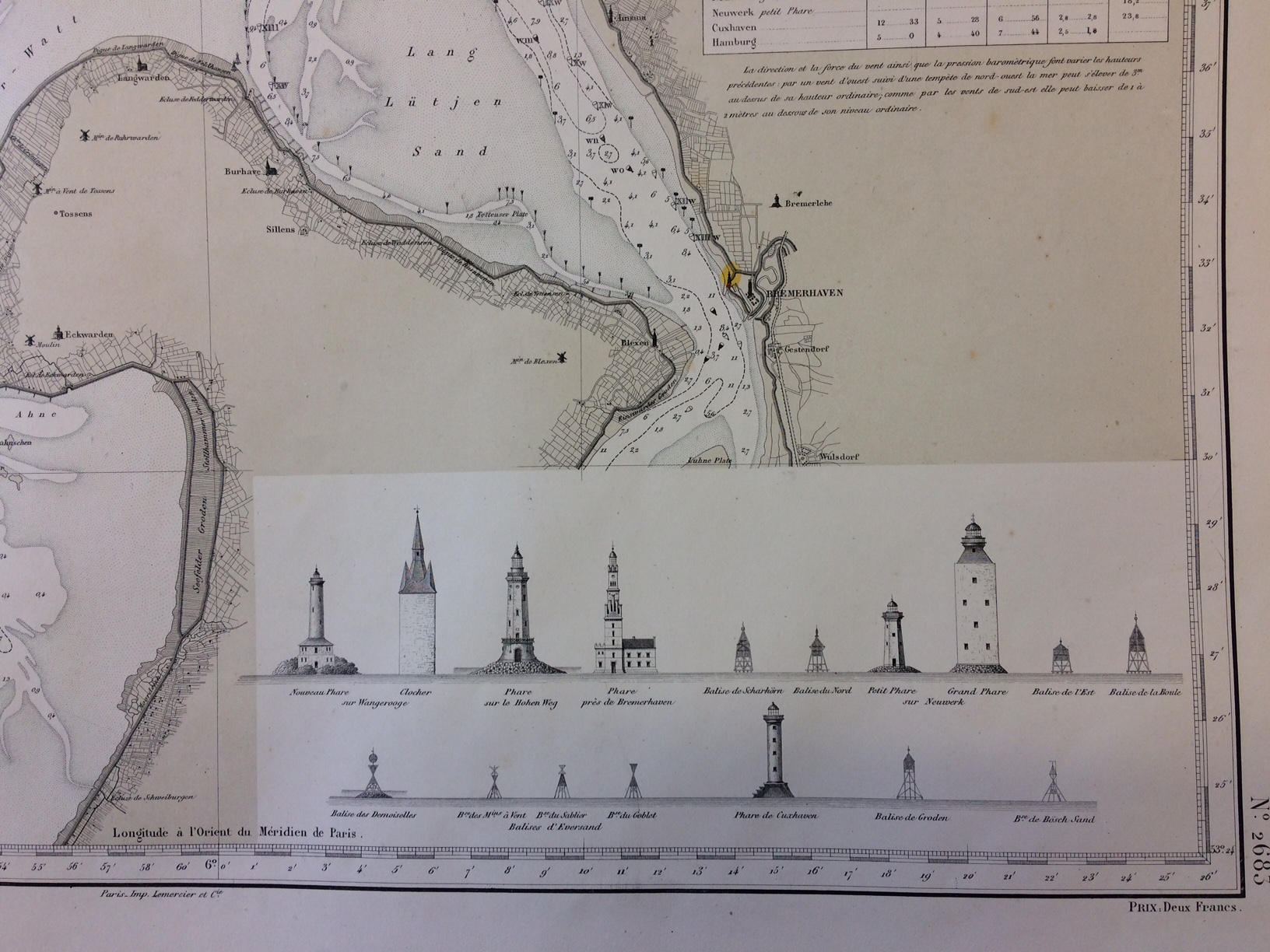 The views in this last example are detailed depictions of individual seamarks. This image is from an 1868 chart showing part of the German coast (estuaries of the rivers Elbe, Weser and Jade). Here the natural landscape is flatter, and the distinguishing features that can be seen from the sea are artificial constructions. The pictures include a bell tower as well as lighthouses and buoys, and landmarks like churches and windmills are marked on the chart. The yellow blob at Bremerhaven is a lighthouse – they were all highlighted in colour, by hand, on these otherwise largely uncoloured charts.

One thought on “Views from the sea”